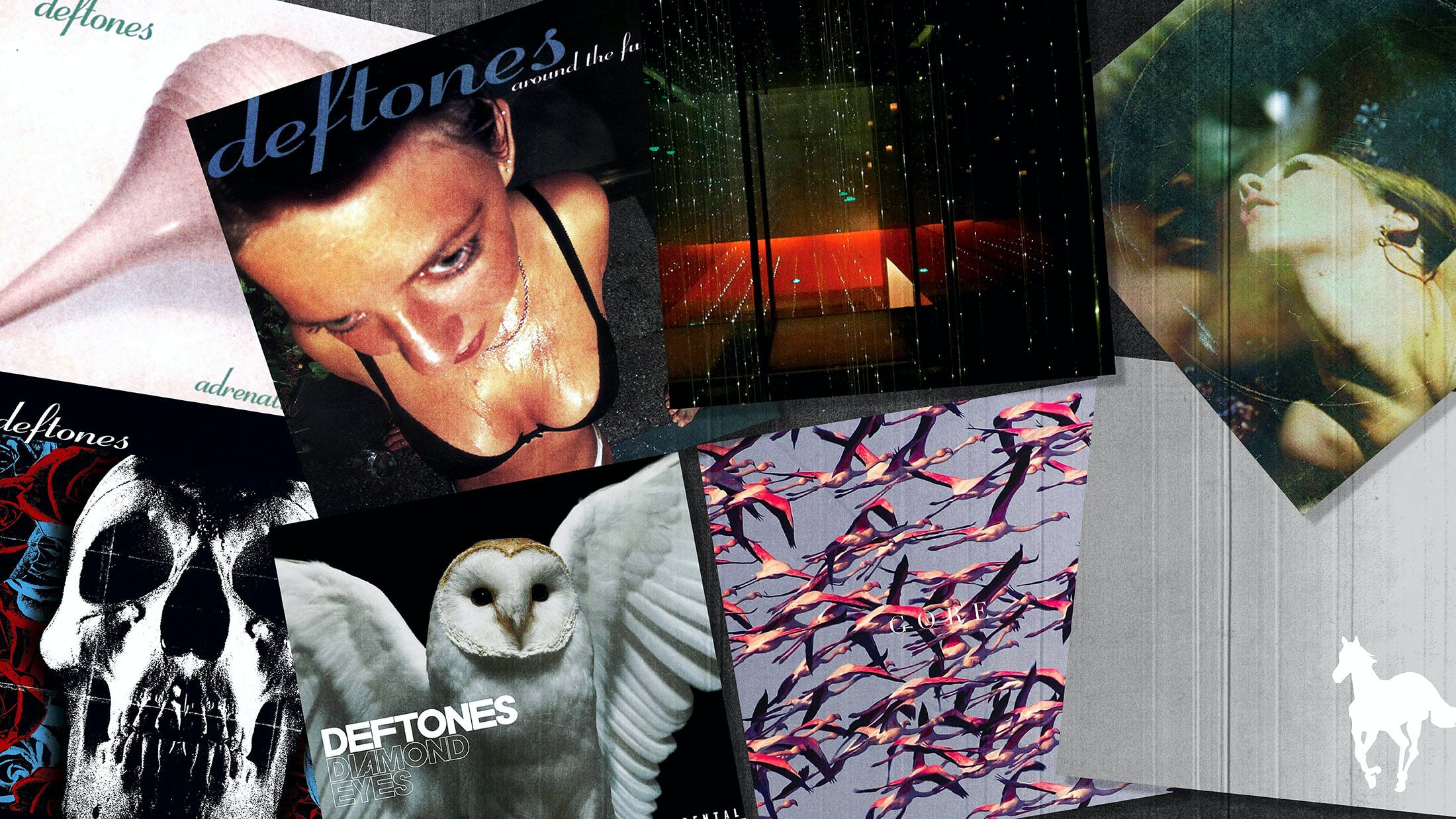 Since first emerging from the sun-bleached streets of Sacramento in the ’90s, Deftones have weathered fame, fortune, tragedy and trauma to produce a back catalogue that could compete with any other iconic band, no matter how exalted they may be. Contrary to what even some of its members may tell you, there are no bad Deftones releases. In fact, the task of ranking their albums provides an excellent recipe for torn-out hair, nosebleeds and sleepless nights. We went through it all for you, guys...

There is something preposterous about saying that songs as demonstrably astounding as Swerve City, Leathers and Tempest belong to Deftones’ worst album. Koi No Yokan is, in fact, a superb record. But as this is a list, something had to be last and the case can be made that this is perhaps the only Deftones album that didn’t radically alter the sound and general scope from the preceding record before it. Koi No Yokan plays as if it is their triumphant comeback album Diamond Eyes reimagined in widescreen – its songs longer, its textures richer. Turns out the worst Deftones album is still one of the best of the past decade. Go figure.

Historically speaking, a lot of factors have converged to make Deftones’ fifth album the most divisive and misunderstood record of their career. And that mixed-reception on UK shores isn’t just because Pink Cellphone boldly reminded us of our shitty teeth and beer. One factor was that it lacked the anthemic grandeur of White Pony, the bruised beauty of their self-titled record or even the sheer aggression of their first two outings. There’s also the fact that Deftones have been so vocal about the fraught state of their relationships during its recording (hell, just re-read the lyrics to lead single Hole In The Earth...) not to mention their dissatisfaction with it overall. In 2016, Chino Moreno confessed to K! that he can no longer even listen to it. “That record is so unconfident, that’s why I hate it,” he said. “I don’t feel like it’s me, it’s this unconfident version of myself that doesn’t know what he’s doing.” Yes, it is a sprawling Frankenstein’s monster of a record and not without some missteps (Rats! Rats! Rats! – though its lightspeed ending rules). But the fact is this: Beware, Cherry Waves, Kimdracula, Combat and Xerces can share elbow space with Deftones’ best songs. That it also features Chi Cheng’s last (released) contributions on bass only serves to make it more poignant now than it was at the time.

The cause of much concern ahead of its release, Deftones’ latest album, Gore, came into view riding a tailwind of controversy courtesy of Stef Carpenter. Prior to its arrival, the guitarist told Ultimate-Guitar.com, “I think the proudest thing about my guitar playing on this record is just playing on the record because I didn’t want to play on the record to begin with.” It was a statement that spun out into numerous headlines and had many worrying that the Deftones were feuding again. Only... they weren’t. At all. Stef was, in fact, only talking about one song in particular – Hearts / Wires, which, it should noted, he eventually went on to love. And there a lot of songs to love, not least for the way they push Deftones’ sound. Just take the intro of Xenon, which is straight out of Kurt Cobain’s In Utero playbook before it spreads its wings and soars off somewhere else completely. Elsewhere, with the likes of Geometric Headdress, Prayers/Triangles and Phantom Bride, Gore is the sound of a band still firing on all cylinders and making some of the most compelling songs of their career.

And so we come to one of the most electrifying opening statements in metal history. Taken alongside Korn’s self-titled debut, Adrenaline helped establish the blueprint for a sound, not to mention a look, for a million nu-metal bands to take notes on (read: steal). Other bands may have shifted more records using it, but no-one did it better; there is an alchemy on Adrenaline that, even in its rawest incarnation, is both white-hot and cool-as-fuck. While Chino Moreno’s lyrics – poetic, esoteric, sometimes borderline unintelligible, and yet all the more fascinating for it – are one standout, but Adrenaline is really all about Stef’s unchecked fret rampaging. You don’t need to crank up Engine No.9 and 7 Words especially loudly for them to sound ear-splitting.

When K! point-blank asked Chino Moreno about which of Deftones’ albums is his favourite in 2016 he was unequivocal on the subject: Around The Fur. “It’s still my favourite record. And I think it always will be,” he replied. “The essence of Deftones was on fucking fire during that time”. True that. Written and recorded in just four months, Around The Fur practically overdoses on Deftones anthems, with ubiquitous bracket-clad classics My Own Summer (Shove It) and Be Quiet And Drive (Far Away) in particular being tracks that a host of bands have used not so much as templates for songs, but rather entire careers. Throw in some of the heaviest tunes in their discography (Lotion, Rickets and Headup) and this was the precise moment Deftones became the coolest band in the world. It’s a crown they’ve held onto ever since.

Diamond Eyes wasn’t the album we were meant to get. After Saturday Night Wrist, Deftones had managed to put personal squabbles aside and were working on the (still-unreleased) Eros at the time Chi Cheng suffered the horrific car crash that would leave him in a coma and ultimately claim his life. Enter: Quicksand bassist Sergio Vega, who stepped into the role and helped Deftones pull off one of the most remarkable second-winds in rock history. Royal and Prince were among the first songs they came up with, and by the time they had finished they had recorded a new classic thanks to the propulsive Rocket Skates and the snaking groove of You’ve Seen The Butcher. It is the title-track, however, that really hits home with it being all but impossible not to think of Chi as Chino delivers its yearning, celestial chorus hopefully of ‘Time will see us realign’. It’s a beautiful, elegiac sentiment , one that only cuts deeper in the present.

In Deftones’ own recollection, their self-titled album - originally christened Lovers – is a product of their “dark days,” and that’s not just because it cost them an eye-watering $2,000,000 to record. Against the backdrop of enjoying the platinum sales of White Pony was a band with members contending with personal disagreements, divorce and escalating drug use. Out of this, however, came an album that channels that turmoil into something truly elegant on songs like Minerva and Good Morning Beautiful, and searing on Hexagram and Bloody Cape. And it doesn’t stop there, either – it also saw more experimentalism than ever before with the trip-hop sonics of Lucky You and the quietude of Chino’s own personal favourite Deftones song: Anniversary Of An Uninteresting Event. The only flaw here was removing the stunning ex-title-track Lovers. It was later included on the Hexagram single, though, so all is forgiven, chaps.

It is rare thing for a band’s most wilfully arty and progressive offering to also be their most commercially successful, but then White Pony isn’t just any old album. Deftones were never a nu-metal band, but after White Pony no-one could throw that tag at them ever again without betraying a colossal amount ignorance. White Pony was, and remains, an album of rarified genius – the sound of a band burning the scene they had (unintentionally) created to the ground and blazing a new path that no-one else could follow. At its heart was something of a creative battle for control between Stef and Chino on guitar. What transpired was a game of brinkmanship – for every super-heavy riff Stef introduced, Chino would respond with a dark, brooding art-house entry. Out of this tension came a record with mesmeric ebbs and flows – not to mention textures from Frank Delgado – ranging from the ferocity of Korea to the becalmed Teenager, slow-burn psychedelia of Mini Maggit and the sound of Tool’s Maynard James Keenan letting rip on the chorus of Passenger. That an album this artistically challenging and rich would go on to shift a million copies in the US and put Deftones songs like Change (In The House Of Flies) on MTV’s TRL next to the likes of Britney Spears remains astounding. With neither a minute, let alone second wasted, White Pony is Deftones’ masterpiece.