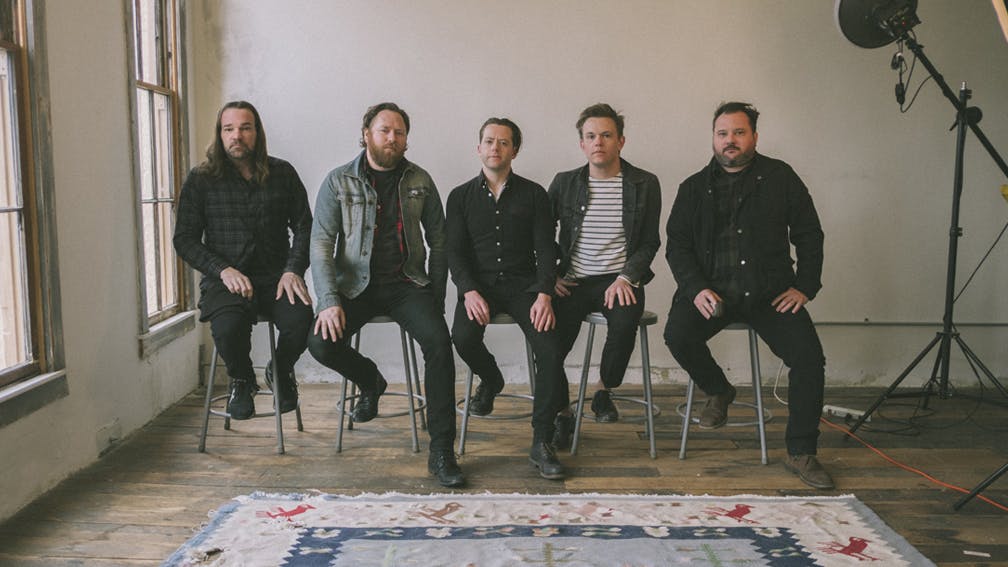 For a man who has just released The Get Up Kids’ first new music in over half a decade, Matt Pryor cuts a disarmingly calm figure. The Missouri emo heroes – completed by Jim Suptic (guitars/vocals), Rob Pope (bass), Ryan Pope (drums), and James Dewees (keys) – have just put out new four-track EP, Kicker and while Matt’s quick to stress that, despite the band’s somewhat on-again/off-again past, the group have in fact been reunited for long enough that this doesn’t count as a comeback. Nevertheless, he also understands what new music means to their fans. K! caught up with Matt to find out how it all came about in the first place, and why The Get Up Kids will never let their influential status dictate their decisions…


Hey, Matt! How’s the reaction to the EP been so far?
It’s all been pretty positive! I haven’t seen anything negative, but I have seen the occasional, ‘Hey, look at me, I’m funny on the internet,’ snarky kind of stuff. And that’s fine; it’s to be expected. But for the most part, people seem to be pretty stoked on it – which I am too, so that’s good.

How do you feel when people say the motivation for band reunions is financial?
There are two sides. I can give you my general philosophy, and that is: fuck them! I got into this whole thing with people when Jawbreaker played Riot Fest and I was like, ‘Who cares? If they want to get paid then let them get paid!’ It’s so ridiculous. When we broke up [in 2005] and got back together [in 2008], everyone was like, ‘Urgh, every band gets back together.’ And I’m like, ‘Yeah! Every band does get back together. Unless somebody dies, bands do not break up.’

What’s the other side of it?
Well, for The Get Up Kids, we don’t need to put out new music to make money. We can keep playing the old songs and going away and coming back for seemingly who knows how long. But the fact is: we wanted to make new art. I don’t know how to explain it, because you walk a fine line when you’re talking about your own creativity where you can sound like an arrogant douchebag, but the stuff we were doing made me excited. So I was like, ‘Let’s pursue this.’ People say, ‘Oh, they got back together…’ but we got back together 10 years ago! We’ve been back together for as long as we were together before we broke up (laughs). We’ve been a band for 23 years, and we were broken up for three of those years.

How did this ‘comeback’ begin? On your last album, 2011’s There Are Rules, you’d started getting together as friends again after some time apart. Was it the same story this time around?
Pretty much. When we got together, there wasn’t an endgame. There’s a studio that’s, like, 20 minutes from my house in the middle of nowhere, so we were like, ‘Let’s just go and see what comes out of it.’ We did that little by little, and eventually it was like, ‘Okay, what is this?’

At what point was it that you realised you would release new music, then?
Maybe two years ago. The idea has been gestating, but this band is a scheduling nightmare because we’re all so busy. Like, the fact that we even got promo photos taken is amazing (laughs).

Did you approach the writing of the EP any differently than before?
It wasn’t intentional – it was just the way things happened. This band has always moved at a glacial pace, and we take our time with things. I think you’re a liar if you’re a professional musician and you say that nothing is calculated, but as far as the creative side and the actual songwriting, it’s very natural and it feels comfortable. We’ve been doing this for 23 years, so when we’re writing together, we have a shorthand that we communicate with, where it’s like, ‘You know that part where you do that thing that’s like booga-booga-doo-doo-doo? Do that again!’ There have been times over the years where we’ve not all been on the same page, but lately it seems to be pretty easy-going.

Now you’ve had some time to process everything, how do you feel about the new Get Up Kids music?
I really like it, I’m really proud of it. I feel more confident in it that people will like it. Sometimes we’ve done stuff and I’ve been like, ‘Well, this is weird… it’s good, but it’s weird, and I don’t know if people are going to get it.’ But this one I’m like, ‘This is good, and people are going to get it!’ That makes me happy. I have to go through phases of not listening to it – because when we were mixing and mastering it and I had to listen to it all the time. And then we were trying to figure out video stuff and I’m like, ‘Urgh!’ (laughs). I’ve always felt good about it, but I just have to take breaks – like anything.

You’ve spoken before about how fans of the band can be quite possessive over your music, and they have a problem with you evolving. Was that a worry or a consideration for you this time?
It’s not something that I worry about, but it’s something I’m aware of. No other person’s opinion, other than my bandmates’, is going to change my mind about what we do, but I understand. I’m a fan of music too, and sometimes I’m like, ‘I only like the first couple of records’ – and I hate it when I say that, because it’s like shooting myself in the foot. But sometimes it’s true! At the same time, though, it’s like, ‘Okay, if you don’t dig it then you don’t dig it. I don’t care.’ If you don’t want to come to the show, then don’t. But if you do come to the show and the only thing that you like is the old stuff, you’ll hear those songs and you’ll have a fuckin’ blast, and then maybe you’ll be like, ‘Hey, I hadn’t heard this new song before, this is pretty good.’ I get it – we all get it and we’re aware of it – and it doesn’t change anything. We’d be lying to ourselves if we didn’t understand.

Do you feel the same when bands say that they have been influenced by TGUK – does that affect your mindset?
My feelings on that have evolved over the years. On the one hand, I’ve said in the past that I don’t really care, but I don’t think that that’s entirely true. It doesn’t change what we do, but it is high praise to have anybody to say that they’re influenced by you. And so I appreciate and I’m grateful that people like what we’ve done – and hopefully will continue to do. I’m aware of it and I do care, but it doesn’t change any part of the creative process. If someone gave you a compliment on the street, like, ‘Oh, I really like that hat,’ then you’d be like, ‘That makes me feel nice…’ but it’s not like you’d exclusively wear that hat to impress that person.

Finally, then, is there anything left you hope to achieve with this EP?
I would hope – and if it doesn’t happen then I’m okay with that, because we’re doing fine – to possibly reach people who may have not given us a chance through some of our creative misadventures, to hear this and be like, ‘Oh okay, I get this…’ I feel like sometimes, some of our records, people didn’t like them when they were younger, and then they’ve come to like them when they’ve gotten older, and I think sometimes people have kind of written us off in their mind. So it’d be cool – but if it doesn’t happen, then that’s fine – to try to get their attention again, because I think that people will like this EP, and people will like the stuff we have coming in the future, too. It’s going to be a busy year for us!

The Get Up Kids' new EP Kicker is out now on Big Scary Monsters. Check it out below.

The Get Up Kids

The Get Up Kids Have Made Their Peace With Being Emo

With the release of their new album, The Get Up Kids have grown up enough to not give a shit about what some call 'emo.'

The Get Up Kids: A love letter to Something To Write Home About

Because we're beyond excited The Get Up Kids are back!