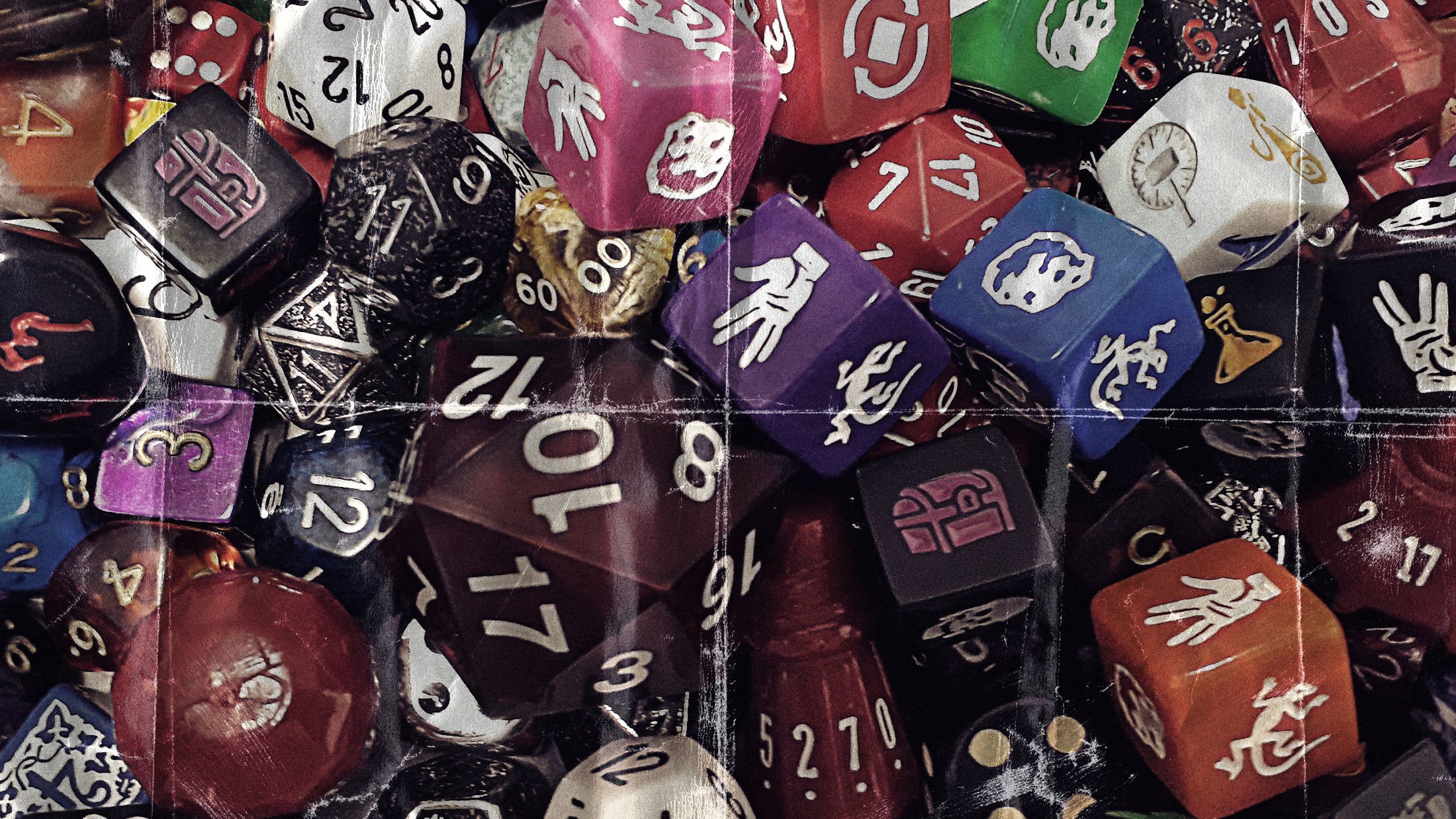 Desert rock pioneers Kyuss took their name from a Dungeons & Dragons monster; one-man black metal band Isengard’s logo was swiped directly from the Middle-earth Role Playing game; and, decades before Stranger Things, there were a host of groups named after the ultimate D&D baddie, the Demogorgon.

Metal and table-top role-playing games have shared influences since their beginnings. To this day there remain a handful of bands who proudly proclaim their love of RPGs, and plenty more who have been inspired by them, one way or another.

In the mid 1960s, J. R. R. Tolkien’s bucolic Middle-earth became an unlikely part of the hippy counter-culture, and his influence trickled down through numerous bands formed in its wake. Robert Plant’s lyrics for Led Zeppelin’s Ramble On were famously inspired by Lord Of The Rings, and Tolkien’s Gandalf was apparently very much on Geezer Butler’s mind when he wrote the words for Black Sabbath’s The Wizard. While early metallers were busy plotting a musical journey over the Misty Mountains however, others were channelling their newfound fantasy fascinations in a different direction.

Born out of the war gaming world, tabletop role-playing game Chainmail went on sale 13 months after Sabbath’s self-titled debut arrived in record stores. Chainmail’s rules included a fourteen page ‘fantasy supplement’, written by a young Chicagoan named Gary Gygax, who was heavily inspired the magic, creatures, and characters of Tolkien's works, as well as those of Robert E. Howard, and other fantasy authors.

Chainmail’s Fantasy elements expanded through subsequent editions until, in 1974, Gygax’s Dungeons & Dragons rules for the game were published. D&D quickly became synonymous with fantasy gaming. Within a decade of its release, D&D had three million players worldwide, becoming the most widely played and well-known tabletop RPG ever.

The November 1987 edition of UK RPG magazine White Dwarf was advertised as a ‘Thrash Rock Special’. “Your eyes and minds have been devastated by White Dwarf for the past ten years, now it’s time for your ears to get it!” an ad in the back of the previous issue warned. The magazine came with a free flexidisc whose single track, Blood For The Blood God, was specially written and recorded by British thrashers Sabbat for WD. Printed on the disc are the words “Based on Games Workshop’s Warhammer fantasy roleplay game”, making Blood For The Blood God the first ever official RPG tie-in metal record.

Two years later, death-grind band Bolt Thrower released their second album, Realm Of Chaos: Slaves To Darkness, on Earache Records. The album’s cover art came courtesy of Nottingham-based RPG maker and retailer Games Workshop. Many of the song titles and lyrics related directly to the store’s own sci-fi fantasy RPG, Warhammer 40,000 – of which members of Bolt Thrower were dedicated players. Copies of the album were even sold in Games Workshop, alongside the usual miniatures and rulebooks.

In the 1990s Games Workshop started their own label, Warhammer Records. Warhammer released a handful of records by bands like Saxon and Wraith, but only put out one RPG-specific album. D-Rok’s Oblivion was based in the same Warhammer 40,000 fantasy world as Realm Of Chaos; where heavily armoured Space Marines do battle with aliens (largely sci-fi twists on standard D&D fantasy creatures). Despite a guest appearance by Queen guitarist Brian May however, Oblivion didn’t make much of an impact outside of Games Workshop’s established clientele.

During the 1980s, the American media went into a tailspin of conservative Christian paranoia. The Satanic Panic (as it became known) saw all kinds of people suddenly accused of Satanic practices, child abuse, and even murder. Metal and Dungeons & Dragons were branded as recruiting tools for Satanism and witchcraft. Despite all the leaflets distributed outside schools, and TV specials exposing the ‘truth’ about both, D&D and metal survived the decade without any real shred of evidence against them.

In 1990s Norway however, black metal bands like Emperor, and Burzum did their best to practice exactly what conservative America worried that fantasy gaming and metal were preaching. Murders, suicides, and church burnings carried out by various band members caught the attention of the worldwide press. The most notorious figure of the scene was Varg Vikernes of Burzum, who in 1993 murdered Mayhem guitarist Euronymous. Varg’s pseudonym, Count Grishnackh, was taken directly from Lord Of The Rings’ orc captain Grishnákh. Burzum is itself a name taken from Tolkien – his orcish word for darkness. Convicted of murder and arson, Vikernes served 15 years of a 21-year sentence and was released from prison in 2009.

Vikernes released his own RPG: Mythic Fantasy Role-playing Game (MYFAROG for short) in 2015. MYFAROG is by all accounts a rather old-fashioned and overtly right-wing version of the Middle-earth RPG from which Vikernes and other black metallers drew their inspiration – much of its content based upon his own neo-Nazi and white nationalist beliefs.

In 2017, US based Tempest Tome Games released Cryptic Explorers - a table-top RPG with an unmistakably black metal aesthetic: spells, weapons, and creatures within the game are named after songs by Mayhem, Leviathon, Emperor, and more.

As so-called Nerd Culture has been more embraced by the mainstream – superhero films grossing billions at the box office, comic books sharing shelf space with Shakespeare – RPGs have undergone something of a renaissance in recent years. Jamie Hooper, former screamer for 3 Inches of Blood (whose Destroy The Orcs remains a metal RPG favourite) was quoted in a 2007 interview saying “Yes, we do play Dungeons & Dragons, and we're not ashamed to admit it.” More recently Connor Murphy of post-rock band Foxing has professed his love of playing RPGs between shows.

In 2014 Utah’s Visigoth released the D&D inspired track Dungeon Master (‘Take a chance, roll the dice / Is this hell or paradise?’). The same year the video for Mastodon’s High Road referenced both tabletop fantasy gaming and live-action role-playing (LARPing).

Perhaps the most overtly RPG-inspired band of the moment are Gygax. Named in honour of D&D’s creator, the Californian four-piece play Thin Lizzy-esque hard rock with themes lifted directly from the players’ handbook. Songs on their 2019 album, High Fantasy, reference D&D monsters like the Beholder (The Eyes Have It) and the Displacer (Light Bender). Not only that, but the High Fantasy vinyl sleeve folds out into a Dungeon Master’s screen – so that you can DM your latest adventure from behind the epic cover art created by Games Workshop artist Fares Maese.

For years it seemed that rock and metal bands were doing their best to distance themselves from their sword and sorcery loaded past, but today many bands and fans appear keen to embrace the fantasy-laden side of the genre once more. A whole new world of adventure awaits us; all we have to do is roll the dice...