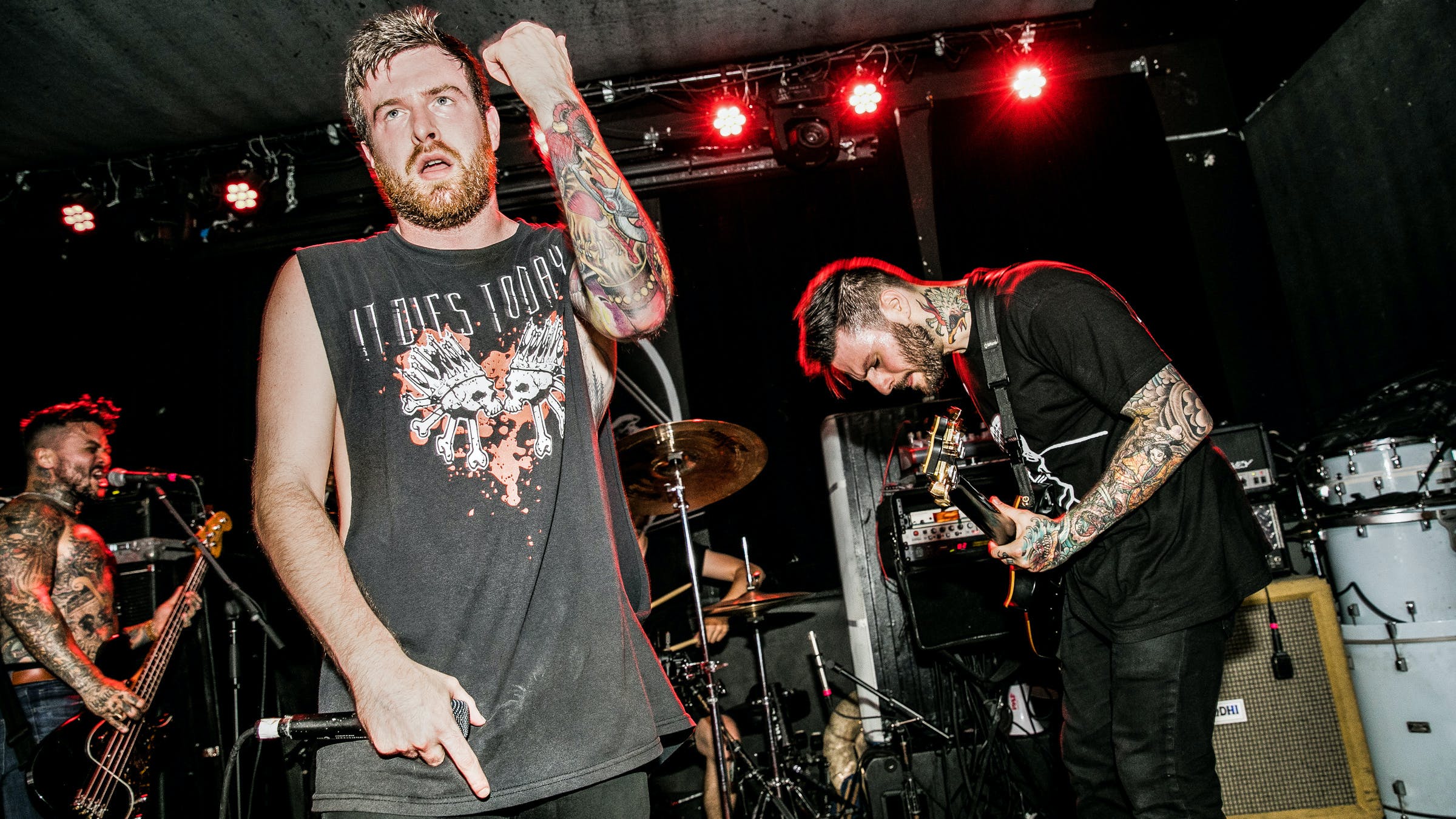 END is absolutely filthy. The band’s debut EP, From the Unforgiving Arms of God, falls on ears like a bloody curb stomp – which is why I knew that watching them play Saint Vitus Bar in New York would figuratively (and quite possibly, literally) kick my teeth in. But I was more than okay with that, yearning to feel the fierce power I knew only END could deliver. And they did.

Saint Vitus’s stage is a pen barely big enough to contain the five beasts pulled from some of the most reputable acts of the genre, including Misery Signals, Counterparts, Reign Supreme, Shai Hulud, and Fit For An Autopsy. Their physical presence and sonic belligerence makes one believe that they were handpicked from hell. Once engaged in conversation, though, they reveal themselves to be not demons, but some of the kindest and most open spirits I’ve had the pleasure of speaking with.

When I talk to guitarist Will Putney some weeks after the show in Brooklyn, he is on his way to a Fit For An Autopsy show that he will not be playing. He still writes and records the band’s music, but right now his physical coordinates appear on END’s roadmap instead. “It’s just fun,” he says of his new band’s gigs. “Leading up to the show, there’s always that moment where I’m lugging gear around and I’m like, ‘What am I doing? I thought I was done with this.’ But then I play a show and it’s awesome.”

For Will, END is a kind of rebirth. As he embraces his veteran status in the scene as a musician and producer (Vein, Knocked Loose, Stray From The Path, Every Time I Die), END is the youthful, off-the-wall project that makes him feel like he’s starting his career all over again.

“I was writing songs [for Fit For An Autopsy], and in my head [I knew] it was another band,” he says. “It isn’t supposed to be Fit’s direction. When you like a lot of things, sometimes it’s cool to throw it all in a song, but sometimes it’s not because it confuses things. I caught myself doing that a few times and I realized if I wanted to get it out of my system I should just start another band.”

Having released their first EP in 2017, END are poised to start writing and recording their first full-length by the end of this year, which gives Will plenty of time to stretch his hardcore muscles rather than his metal ones. Still, just because END isn’t metal, doesn’t mean it’s not absurdly heavy. One look at their EP’s artwork will tell you that.

“We wanted a simple image that would make you feel uncomfortable,” Will explains. Without a doubt, this facially disfigured nun – smudged with rotten flesh – gets the job done. “I wanted to take something that is associated with being pure, or – without getting deeply religious – something that’s grand or spiritual, and make it feel ugly. That painting by Adam Burke was perfect for it. For me, that was a cool way to capture the initial release for the band.”

Lyrically, though, Will takes himself out of the equation. Whereas he takes on most of those duties in Fit for an Autopsy, Counterparts vocalist Brendan Murphy holds the lyrical reins for END.

“Brendan’s one of my favorite lyricists,” the guitarist shares. “He’s the guy I can count on to come through. We’ve done four albums together at this point for various things and he is always easy to work with. I knew I wouldn’t have to jump in and write stuff because he would bring good content to the table.”

With song titles such as Usurper, Chewing Glass, and Necessary Death, it would appear that Murphy was a solid choice for the role. Make it past the violent noise and you will find lyrics as hauntingly beautiful as they are aggressive: 'Fucking usurper / Possession by default / Spend another night sleeping beside my ghost / Proprietary sin no longer of this Earth / A poltergeist inside my former home.'

Put all of these elements together and there’s no wondering why END has caught fire so quickly. Whetting the appetite with From the Unforgiving Arms of God creates dire thirst for the band’s full-length record that is to come sometime in 2019.

Let’s just hope your ears aren’t too roughed up by then to hear it.