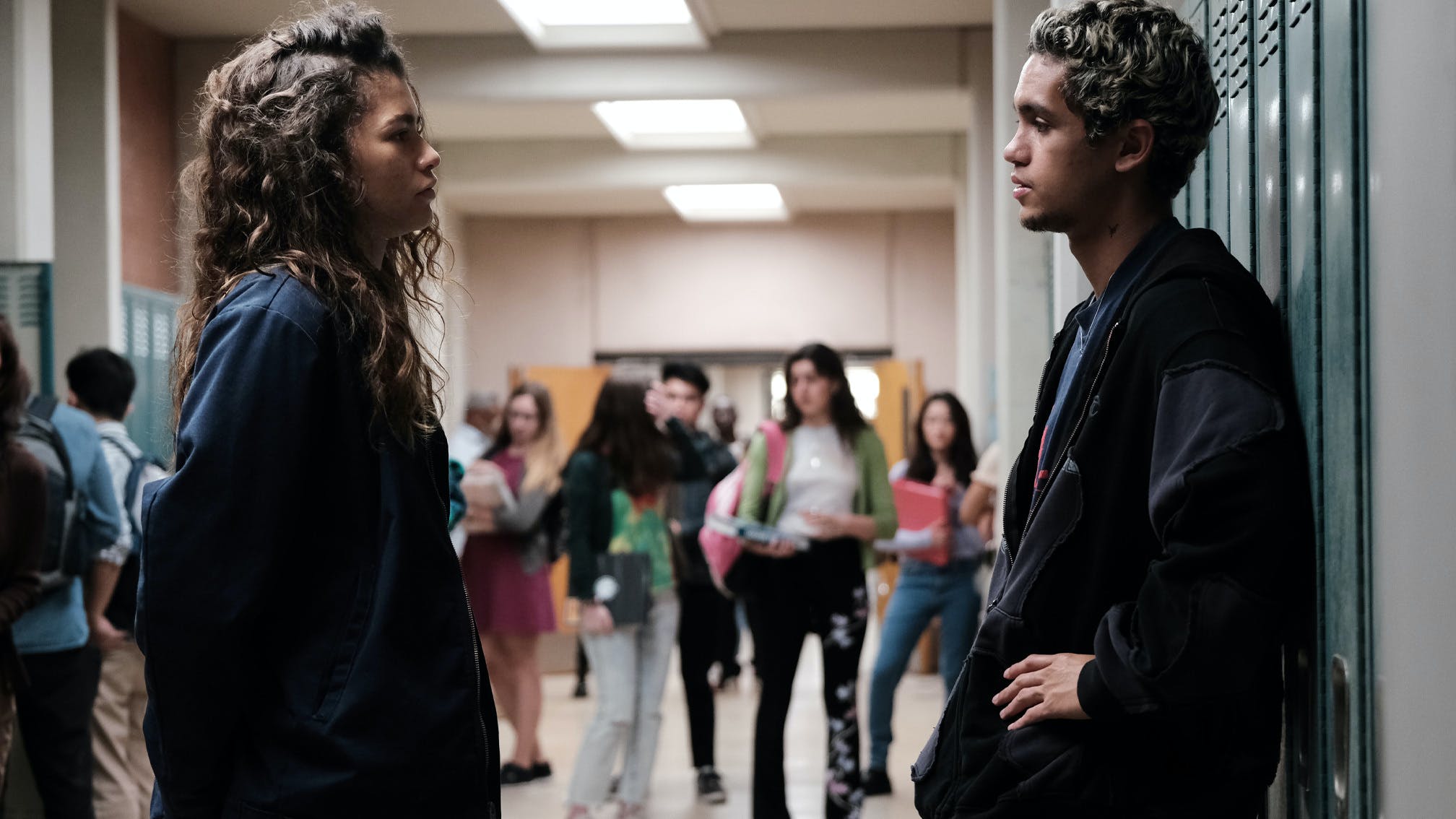 “Fezco’s grandma was a motherfuckin’ G.”

So go the opening words in the first episode of series two of Euphoria. They’re spoken in voiceover, over a pitch-black screen, by lead character Rue. Played by Zendaya (Spider-Man: No Way Home), Rue is 17 and the permanently highest high school student in East Highland.

Fezco is the hit HBO series’ anti-hero drug dealer, played by stone-cold dude Angus Cloud, an actor with the name and sinful charisma of a proper rock star. He’s one of Rue’s closest friends, and not just because he’s her go-to guy for coke, weed, Xanax, Fentanyl, molly or whatever else it is she fancies this or that night.

Operating out of a gas station in this exurban Southern Californian town, Fezco is partnered in business by his little brother Ashtray, a face-tatted adolescent who’s handy with a claw hammer. He’s played by Javon 'Wanna' Walton, the tall-walking, pint-sized 15-year-old last seen on the cover of the winter 2019 issue of THE FACE.

“Hey,” the motherfuckin’ G says, back outside in the car, cradling the black-and-blue face of a young Fezco. “I just spoke to your daddy. You’re gonna come live with grandma now. Okay?”

“Even though she wasn’t like the best guardian, she taught him everything he knew about life,” continues Rue’s narration as we cut to pre-teen Fezco chopping up billowy clouds of coke with a Blockbuster video card. Grandma tells him to stuff the filled baggies into his “tighty-whities”. Why? “The cops ain’t gonna pat down a fuckin’ 10-year-old. They don’t want to be fuckin’ accused of being fuckin’ pederasts, you know what I’m sayin’?”

This is the best youth culture show on television, hands- and pants-down. The U.S. drama, adapted from a 2012 Israeli series of the same name, documents the lives of a bunch of mostly middle-class secondary school-age teenagers: the sex, the drugs and booze, the parties, the music, the relationship rollercoasters, the sexuality turmoil, the social media dramas, the clashes with parents and authority figures.

Of course, these are American kids on a splashy, super-stylised American TV show. So no-one is in any way Not Fit, and their teenage parties and drug experiences and midnight drives in fancy cars around palm tree-fringed neighbourhoods aren’t much like ours. Nor, clearly, are their grandmas much like ours.

And yet: while Euphoria isn’t exactly relatable – it’s almost, but still not really, Skins with (big, stiff) knobs on – it’s nonetheless one of telly’s realest depictions of what it’s like to be young and in/out of love and trying to make it out of your teens with your sanity intact.

The show depicts Gen Z hedonism and addiction with sober-eyed clarity, in all its bleakness and its, well, euphoria. It does this with gripping, plausible-enough plotlines, and with dark humour, ice-cool cinematography, a bangingly of-the-minute soundtrack (including cuts by DMX, Billie Eilish, Lizzo and Drake, who’s a producer on the show) and an atmospheric score. The latter, comprising beat-heavy soulscapes and metal-leaning electronic squawks and squelches, is composed by Labrinth, the London-based producer and one-time Tinie Tempah/Emeli Sandé chart-topping hitmaker. He won an Emmy and an Ivor Novello for his work on Euphoria’s first series.

As for the acting, it’s uniformly fantastic, with the young cast – mostly newcomers – all knock-out.

Model/actor Hunter Schafer plays transgender girl Jules, new in town and the key romantic figure in Rue’s life. Alexa Demie, also seen on the cover of the winter 2019 issue of THE FACE, is Maddy, take-no-shit, on-off girlfriend of jock hunk and king twat Nate (Jacob Elordi). Sydney Sweeney – brilliant in another HBO hit, last summer’s must-see holiday resort drama The White Lotus – is great as Cassie, a girl with a messed up family background and a sexual history that’s weaponised by so-called friends.

But top of the pile is the utterly compelling performance by Zendaya.

Rue is engaging and enraging, a coolly funny but hopelessly lost girl whose host of childhood mental and emotional problems – in part stemming from the pre-series death (from cancer) of her father – have bled into serious drug addiction. We met her at the beginning of series one fresh out of rehab and straight round to Fezco’s to score. At the beginning of series two she’s relapsed again, in part a response to the collapse of her and Jules’ relationship at the end of the first series.

Zendaya cut her teeth as a child performer in Disney shows, dancing and yukking it up for laughs. Little wonder that her physical acting ability is a wonder – she can play high (really high) and low (ultra low) with graceful ease. She can crack you up with her wasted one-liners, and tear you up with her desperate loneliness and struggles with addiction. It was entirely fitting that the actor won the 2020 Emmy for Outstanding Lead Actress in a Drama Series. Twenty-four at the time, Zendaya was the youngest-ever winner of the award.

And now, two long, COVID-delayed years after the first series of Euphoria, it’s finally back – the first episode of the second series broadcasts today in the UK. Centred on a New Year’s Eve house party, the near-10-minute cold open explaining Fezco’s backstory is but the prelude to 50 minutes of intensely emotional drama, ultimately bookended by more extreme violence. But it’s in context, yeah?

So do yourself a favour: binge the eight episodes of series one. Then knock back the two holding-pattern specials broadcast over Christmas and New Year 2020/21. Then buckle up for series two.

Grandma definitely was a motherfuckin’ G. The rest of the Euphoria crew ain’t too shabby either.

Euphoria is on Sky and streams on NOW TV