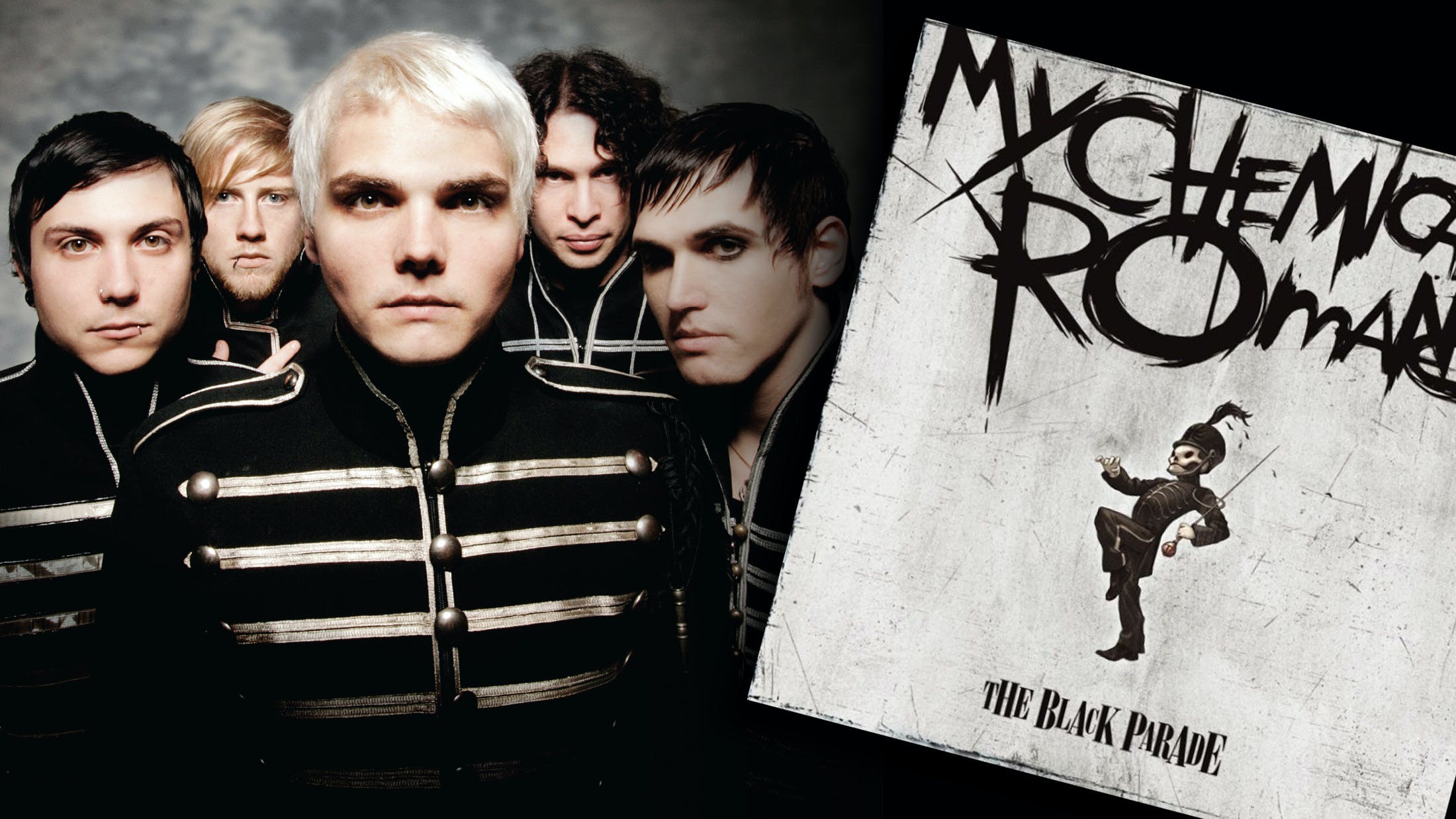 A lot has been said about My Chemical Romance’s The Black Parade. Released 15 years ago, it was an album that took the bloodthirsty punk-rock melodrama of 2004’s Three Cheers For Sweet Revenge and gave it all a glam Hollywood sheen – taking bombastic pointers along the way from Queen and Bowie, while the monochrome military jackets the band wore on tour resembled Sgt. Pepper’s boys caught in The Upside Down. The script, too, was equally ambitious: a theatrical concept that followed the regrets and revenge of a cancer patient as he journeyed from life to death to after-death.

It was a record written by the band’s members – singer Gerard Way, guitarists Frank Iero and Ray Toro, bassist Mikey Way and drummer Bob Bryar – to stand the test of time. And while few would argue against it doing that, what has yet to be (and must be) decided is how its 13 tracks (and one bonus one) would ultimately stand off against each other in some kind of rock royal rumble. Allow us, then, to slice through the controversy and rank definitively the tracks of The Black Parade. Please join us…

Right. Let’s not all think too hard about this one. It’s a bonus track. A fun bonus track, sure – with Gerard over-pronouncing his way through a crooked showtune about the red stuff while being backed up by a sinisterly jaunty Broadway piano. But could you live without it? Yeah, probably.

The fuzzy tape recordings muttering about being strangled that appear throughout Sleep were apparently inspired by night terrors that Gerard suffered while the band stayed at the Paramour Mansion, a recording studio estate in Los Angeles. That’s about as interesting as this song gets, though, as its epic set-up shoots for the moon but doesn’t quite clear the first row of houses.

One of a few songs on The Black Parade that has an obvious hangover from the post-hardcore menace of Three Cheers…, The Sharpest Lives finds Gerard attempting to skewer a reckless life lived on the fringes of excess. It has some great kiss-offs – ‘The sharpest lives are the deadliest to lead’ being one – but other tracks on this album quite simply do it better.

A big, sad-time ballad that doesn’t quite live up to the blockbuster billing that the pensive guitar picking in the intro sets it up for, Disenchanted is still far from being the ‘sad song with nothing to say’ that Gerard sings of, as his Patient character stares mortality square in the face.

Starting with the extinguishing bleeps of an ECG machine, the opener to the record is little more than a brief introduction to The Black Parade – but, particularly as it starts things off with a death, it cleverly tees up the macabre, big-band theatrics to come.

If the title didn’t spell it out, Gerard confirmed ahead of The Black Parade’s release that Cancer was his attempt to pen the darkest song the band had ever put their name to. The lyrics play their part – ‘Baby, I’m just soggy from the chemo’ goes its heaviest line – set against its bleak Beatles-homage. His plan worked – it’s dark, but subsequently also not one you want to have on repeat too often…

8. This Is How I Disappear

Starting with guitars that are reminiscent of My Chem’s debut, I Brought You My Bullets, You Brought Me Your Love, this is another track that feeds off the screeching verve of the New Jersey group’s early work. It’s a match made in heaven for the song’s desperate wrangling between love and death.

With its odd punk-rock flavour and abandonment of the Patient concept, Teenagers is something of a black sheep on The Black Parade. Apparently inspired after feeling intimidated by a bunch of kids during a subway ride, Gerard wrote the song as an examination of the way society villainises young Americans with little reasoning. With such a galvanising subject and its blunt chorus hook, Teenagers was readymade to become the anthem it did.

Like Hang ’Em High on Three Cheers…, House Of Wolves proved that My Chem could still go large when it came to playing fast and loose. Armed with a sinful swagger, the track makes an irresistible song and dance of The Patient’s plummet to hell, with choir boys and angels offering little salvation.

Accompanied by its black-and-white video with Gerard singing in a nice shirt, I Don’t Love You, the band’s first real attempt at a big power ballad, could easily have been a mainstream-baiting misfire. Instead, it’s a strangely beautiful four minutes that gains as much from the weepy guitars as it does Gerard’s mournful vocal snarls. It remains the band’s most simple and raw treatment of heartbreak.

‘Have you heard the news that you’re dead?’ starts the chorus of The Black Parade’s track two. Not only was Dead! the true introduction to the bombast and boom of the record (more songs need a horn section into a guitar solo), it also perfectly snared the monstrously dark wit that lurks around every corner of The Patient’s story.

Perhaps no song better captures the mad ambition of The Black Parade. Opening with the sounds of faint gunfire over a polka arrangement, the track – told from the perspective of a wartime soldier writing home – takes on four or five increasingly agitated forms before actress Liza Minnelli drops in for a duet. Crucially, somehow, it all holds together.

2. Welcome To The Black Parade

There’s something strange about this song appearing in the middle of the album. Those haunting (and very, very famous) opening piano notes, which can suck the air out of any room, always feel slightly abrupt and out of place – a bit like death. With its storybook monologue capturing Gerard’s idea that the end of The Patient’s life has appeared as a version of the parade he once saw with his father as a small boy, it’s a song with limitless scale and feeling. It’s often described as emo’s Bohemian Rhapsody, and that feels about right.

The final ‘proper’ track on the album is also its best. Perhaps it’s knowing that Gerard wrote this song for his brother Mikey when the bassist had to leave the recording set-up due to his increasing anxiety issues, but, beneath all the bravado, it feels like the most real and human moment on The Black Parade. With a chorus that begins, ‘I am not afraid to keep on living / I am not afraid to walk this world alone,’ it’s a dark song, yes, but one that beats with a steely resilience. And with the drama constantly swooping and diving, we see perhaps the most even balance of everything My Chem had been up to this point, with stadium rock solos and intense post-hardcore bits co-existing, while Gerard sings like a man on the edge. It also provides one final twist – and doesn’t reveal the ultimate fate of The Patient.