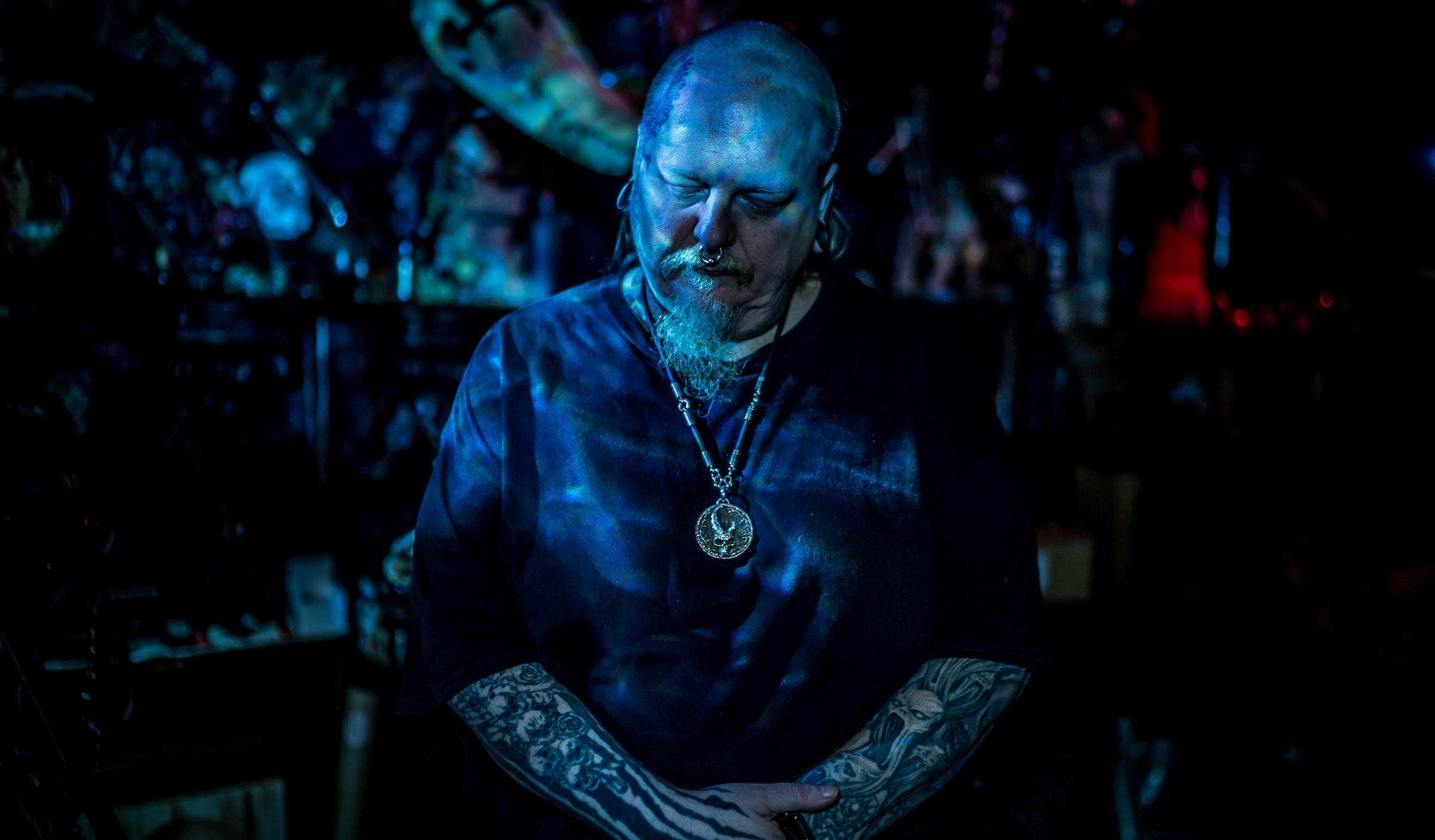 For some, Halloween is a day to indulge in the dark side. But for Paul Booth, the legendary tattoo artist and painter whose work adorns members of Slayer, Slipknot, and Pig Destroyer, it’s barely dark enough.

“I celebrate the season--I look at it more as the harvest, a time to sow what we reap. I celebrate the dark aesthetic, the dark vibe, Devil’s night, the witching hour...all of that, I embrace,” growls Paul over the phone. “Traditionally, Halloween is a day I enjoy, but I’ve never been part of or interested in the hype around Halloween. My biggest issue is that the decor sucks--it’s all lightbulbs shaped like skulls. There’s never any effort put into it. So the commercialism I shy away from.”

Escaping the mainstream is currently Paul’s primary goal. Fifteen years ago, he was hailed as the darling of the tattoo scene, and his studio and gallery, Last Rites, became a landmark in the industry. But the fickle and shallow attention of the world at large disgusted Paul, and while every other tattoo artist was trying to get their own reality show, Paul Booth wanted nothing to do with the celebrity that seemed to occupy the body art industry.

“I’m tired of the tattoo industry and all its bullshit,” growls Paul. Especially, among other things, the whole scripted drama environment that these artists are subbed into. The end result is that it opens the doors to all these douchebags who want to be rockstars as tattoo artists. Hell, a lot of people think stuff like Ink Masters is real, and it’s done its part to poison the industry. The competitive attitude is my biggest issue. A lot of people think tattoo artists are pitted against each other, as part of the industry. And it makes me sick. I’m serious about this. All the old timers are either angry, disgusted, or sad by what’s happened to the industry, and I feel like I want to do my part to set some things right in the industry. I feel like I have an obligation to tattooing to use my voice.”

In response, Booth began isolating himself and focusing on art in all its forms, including music. Paul’s new album, Nihilistic Melodies, is an ambient headtrip filled with all the shadow, misery, and disgust that one sees in his visual art. For Paul, the music is a concentrated emanation of his solitary mind.

“This album is a result of being alone a lot,” he says. “If I’m left alone too long, it’s usually not a healthy thing, other than I produce art from it. I may not be the greatest musician, but I’m exploring and experimenting none the less.”

Some might see Paul’s modesty about his work as being at odds with his negative outlook, but he doesn’t think his love of all things strange and macabre is inherently wrong. “I’m a dark motherfucker, but evil and dark are two different things. I don’t do harm unless it’s deserved, but I also don’t give love unless that’s deserved. So I’m dark, but dark for me is more about despair and misery than evil and hatred. It comes out in the art, whatever it is. As much as people would say I eat babies...I mean, I’m not saying I wouldn’t, just that I don’t.”

And he’s only just getting started. Paul’s next step is to create a genre more grotesque and bizarre than anything anyone could imagine.

“I want to invent doom reggae,” chuckles Paul. “I love the beats and rhythms of reggae, but it’s always Jah shit! Jah this, Jah that, positive and peace and love. I want to make reggae I enjoy that’s anti-Jah. That’s a goal of mine -- I can’t find any dark reggae out there. My goal is a guy with a strong accent who wants to sing about hating God. It’s going to be a tough one!”

Since Paul’s music is instrumental, we asked him to take us on a journey through some of his tracks, as a tour through the dark realms of his mind. In response, Paul sent us this commentary for his track Punishment, and...well, let's just say you won't find chills quite like this in a slasher movie.

Listen to Paul's tour of Punishment below:

Paul Booth’s Nihilistic Melodies is out now. Buy it here.