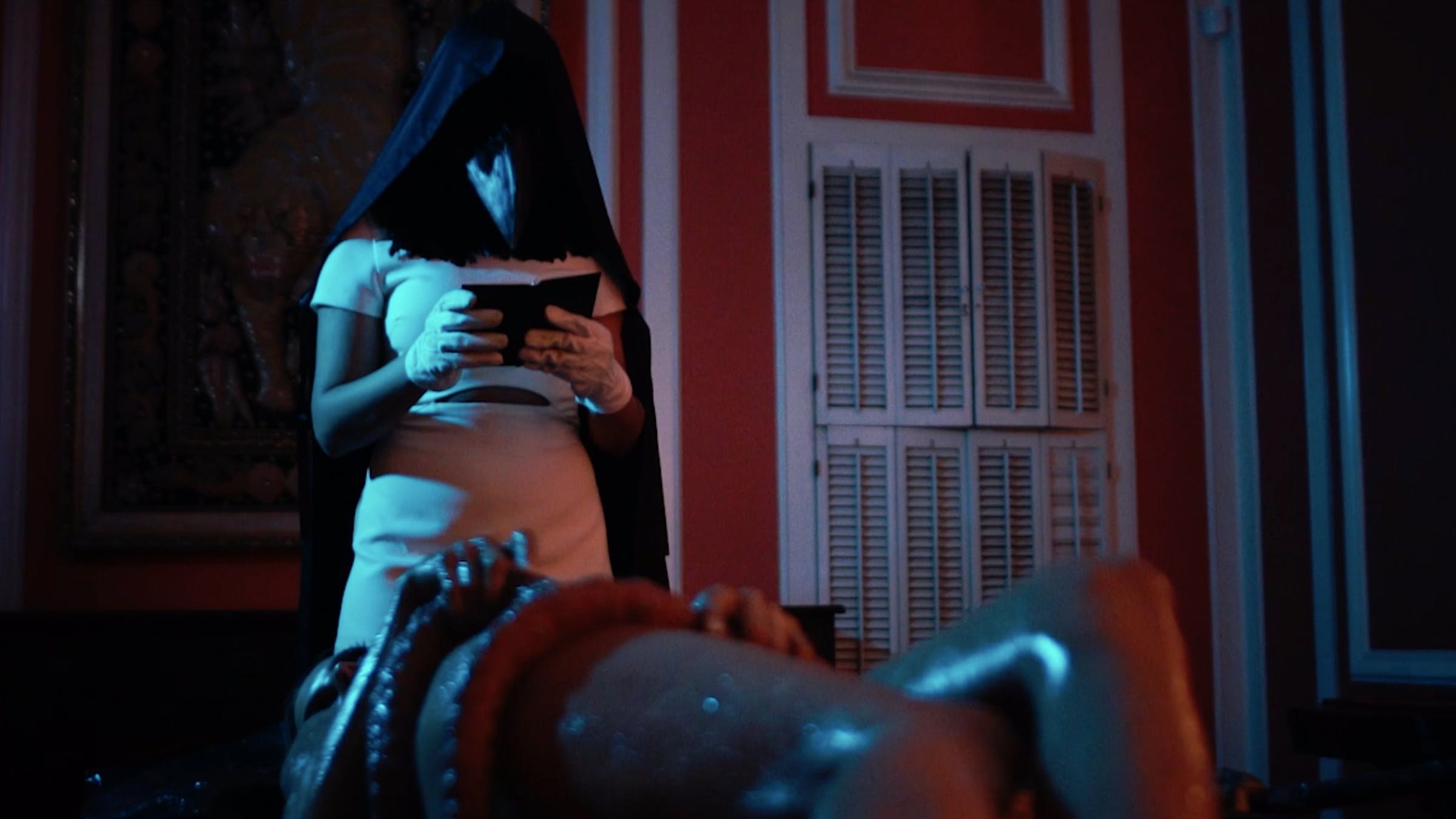 Releasing an awesome, esoteric rock album is impressive on its own; having a harrowing ten-part alien horror film made out of it is goddamn incredible. But then again, so is Black Antenna, the serialized sci-fi film Alice In Chains has commissioned to go with their sixth studio album, last year’s Rainier Fog.

As strange, gorgeous, and heartbreakingly human as Alice In Chains’ music, Black Antenna tells the story of Alpha, an alien trying to return to his home world while living in modern-day America, and Beta, his earth-born daughter less inclined towards fleeing our planet.

We spoke to director Adam Mason about the development of Black Antenna, working with Alice In Chains, and the mythical influences behind Alpha and Beta’s story.

How did Black Antenna come about? Did Rainier Fog come first, or the idea for the movie?

It was a weird coincidence. I’d been wanting to do a low-budget indie film off my own back for quite a while. There’s huge homeless problem in LA right now, and I often get my ideas from looking at people and other shit while I walk home. So one morning last year, I was walking back from my office to home, and I was looking at these homeless people, thinking about what their backstories were. Then I started thinking about all the people who were passing by them, ignoring them. Then, I got the idea of homeless people as if they were aliens, as most people seem to treat them as such, like they don’t exist. From there was born the concept of this homeless father and daughter that, throughout, you gradually find out they are aliens trying to get home.

Coincidentally, that same day, I went to meet Alice in Chains to discuss doing a couple of videos. Jerry Cantrell was telling me about the album's themes, and for whatever reason the record and my idea just came together in my mind. I pitched them the idea of Black Antenna, and they jumped on it. The next thing I knew, instead of doing one or two music videos, we did twelve and a movie.

Each episode of Black Antenna relates to a song on the album. Was that always the plan, or did that come about over time?

It’s the latter. When I first listened to the record, it wasn’t in the order as it is now, so the track listing was determined yet. It took quite a long time to write the script, so at a point I was writing episodes to the specific track. I’m someone who loves the idea of chaos, and I believe great art comes out of a chaotic vibe. Black Antenna is very much like that.

Black Antenna has a really human father-daughter story to it, but also has a lot of shock and terror to it. Was it tough to strike the perfect balance between the intense, fearful moments and the broader, human message?

There’s things go hand-in-hand for me. It’s split between the characters. Alpha is very fearful of humanity, and therefore very protective of his daughter, Beta. However, since she was born here instead of Alpha’s planet, [Beta] feels this affiliation to humanity. It’s kind of based on Pinocchio, because she dreams of being a human and being accepted. Then, you have the bad aliens, like Nil. They kind of based off the Nephilim, which are the fallen angels in the Bible who came to Earth and fucked all of the woman and did tons of crazy shit. My idea with this was to have these aliens come to Earth and fall in love with our vices, like sex and drugs.

Above: Nil and friend watch something unholy in the latest episode of Black Antenna.

Often, there’s this dichotomy of the alien and the bad human, usually a federal agent. However, in this series, both the good and bad here are outsiders. Where did this idea of the character come from?

I was thinking a lot about immigration. It’s a political film in more than one way. The funny thing I find with the immigration process is that a lot of these immigration officials were immigrants themselves. So I was thinking about what gives some people the power to judge. What is the difference between Nil and Alpha, essentially? They’re different sides of the same coin. I just thought it was interesting having an alien chase another alien, with one being more accepted into society than the other. It’s something I feel connected with. I’ve been in America for 12 years, but I am an alien myself. I’m from England. What makes me different from some homeless Mexican guy when I walk home?

Would you say this movie has religious underpinnings to it as well?

It kind of does. It’s an ancient tale that’s been told lots of time because it’s such a powerful story. The underdog going against the machine, the invisible forces. Alpha is just one guy trying to protect his daughter and get back home. That in itself is quite biblical, very Old Testament. In that sense, you can say that Alpha and Nil represent the Old Testament, whereas Beta represents the New Testament, introducing ideas like hope, love, and forgiveness. She’s going to get very broken down over the course of the movie, realizing that the world and humanity is cruel.

If I remember my New Testament correctly, that’s part of the story.

Above: Adam on the set of Black Antenna.

Are there ever moments where with specific scenes, it’s been really complicated, insane, or difficult to shoot? The woman with the octopus tentacles was very disturbing, so I was wondering if it was as hard as it looked, or very easy?

It’s been really difficult, honestly. I do a lot of bigger movies -- like I just did a few movies for [horror production house] Blumhouse -- but I’ve never taken on something like Black Antenna, where I’m pretty much the only crew with my wife, who produces the videos. It’s just so ambitious. [The previous episode,] Drone was just insanely difficult to do, with the beautiful house, the beautiful girls, the nudity and tentacles. Every episode, there’s something huge that we have to pull off. Now that I am on Episode 6, I will say I will be very relieved when it’s all wrapped up.

Tell us about Deaf Ears Blind Eyes. What can viewers expect here?

It focuses a lot more on Beta, and her becoming more self aware. She’s basically selling her body so they can survive, but she’s an asexual being. Sexuality means nothing to her, she doesn’t understand it. But through Roach, the younger guy we meet in Drone, she starts building much more of a relationship with him. Through this, she starts to understand “shame” more, and as he tells her what she’s doing, she begins to feel betrayed by her father, Alpha, and humiliated. That forms a rift between them, which will escalate through the next few episodes as Beta discovers more what it’s like to be a human being. Everything snowballs from there, because now Alpha is not only trying to stay off of Nil’s radar, but also is having a problem with his own child. That’s where it all starts to go wrong.

Watch the latest episode of Black Antenna, Deaf Ears Blind Eyes, below -- but be warned, it's pretty NSFW:

Make sure to catch up on Black Antenna by watching the previous episodes:

See Alice In Chains at one of their three upcoming UK shows:

Info about these shows can be found on the band's official touring page.

American fans should make sure to catch them live with Korn and Underøath on their North American summer tour:

For information about this tour, check out the official tour website.