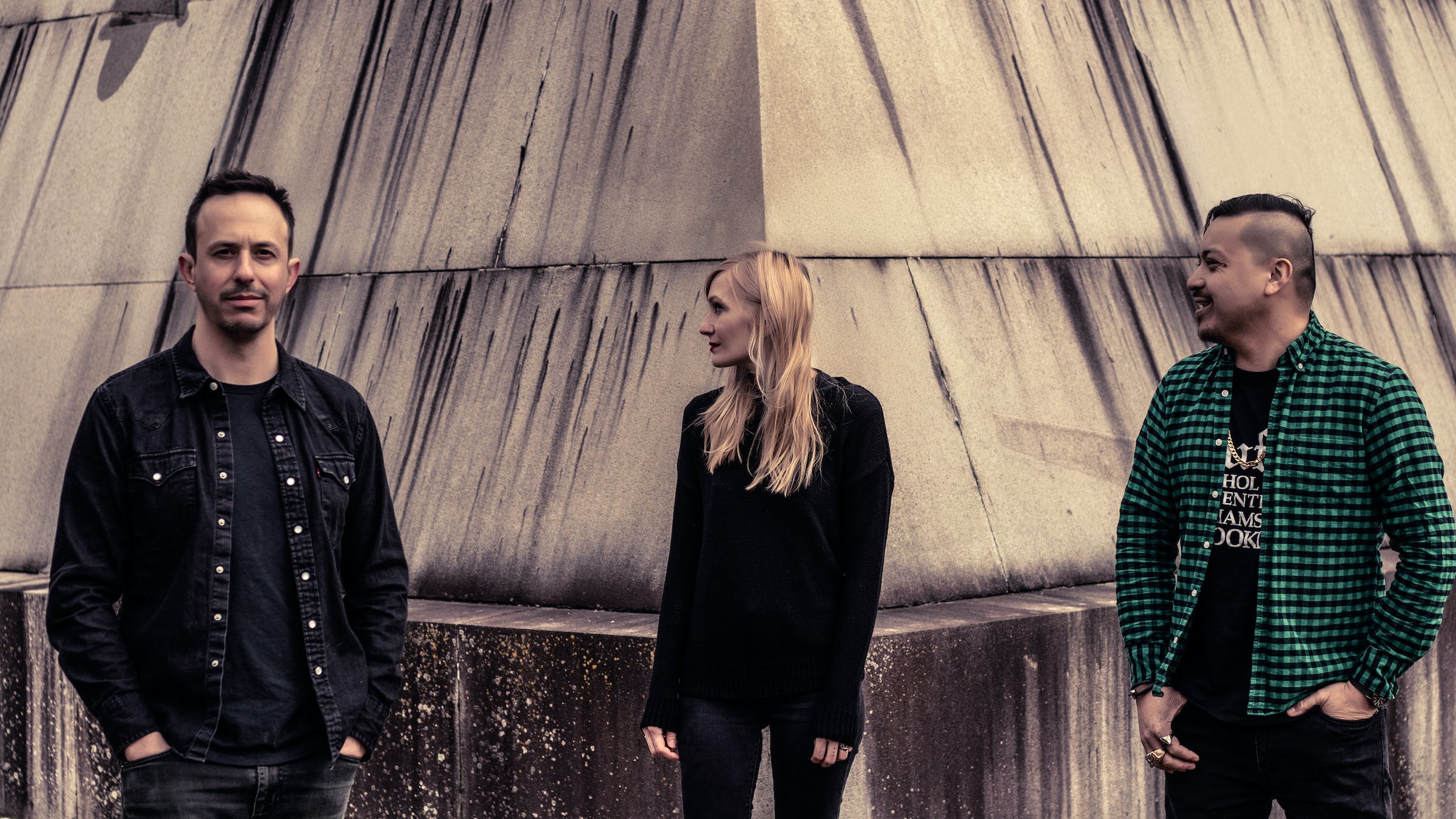 It’s a familiar story: Two musicians move across the country, in this case from San Diego, California to Brooklyn, New York. They play local shows to sparse crowds while patching together jobs across the music industry to make rent. Eventually, the rent gets too high to make consistently, and the daily stress of living in New York gets too heavy to endure. The couple decamp for somewhere less hectic, with fewer people and less pressure. Somewhere like Pittsburgh, let’s say, with a modest national pedigree but more space to think and nicer neighbors.

Typically this is a story of defeat, of lowered expectations after washing out of the big city. That isn’t post-metal outfit Spotlights’ story. Spotlights began in 2007 when Mario and Sarah Quintero, the band’s founding members, were both living in San Diego, where Mario ran a recording studio.

“We met through music and we became really good friends. For a couple of years, we were going to shows, and I was recording her band. Eventually, we started dating,” Mario says over the phone. “We always had an idea of starting a project, not necessarily a band, but some sort of recording project.”

Track by track, a recording project turned into a full-fledged band. By the time they released the Tidals EP in 2016 they had settled into a sound built on room-rumbling bass, hushed vocals, and sparse but evocative synth parts that shimmered beneath the surface of their ocean of distortion.

“Nothing is ever really forced or preconceived,” Sarah explains. “We let the art run us, and we feed what it needs.”

That the couple would wind up working in this mode is hardly surprising given their early influences.

Mario was raised in Miami alongside two older sisters after his family moved from Bogota, Colombia when he was eight years old. “I got all my music from [my sisters] when I was little. Michael Jackson, and Prince, and stuff like that. I would just go into their rooms and steal their tapes, records, or whatever they were listening to,” says Mario. Although no one in his family was a musician, his parents kept a classical guitar that they’d bust out when friends were over to play Colombian music. Eventually it caught Mario’s interest. “I picked it up and started messing around, and my oldest sister, Adriana was like, ‘You need to learn this song,’ and give me a song by The Cure to learn, and I was like, ‘I have no idea what I'm doing.’”

With enough pressure from his sister Mario stuck with both the instrument and The Cure, along with contemporary acts like R.E.M. and Depeche Mode. If Mario’s early influences provided Spotlights with their melodic tendencies, than Sarah’s gave the band their sonic heft.

“I don't have any musicians in my immediate family, but my parents were both very heavy music listeners. And it was the ’80s, so I got a lot of really good influences,” says Sarah. While growing up in Chicago, Sarah’s parents would play a steady stream of hair metal and classic rock. “I was always singing and listening to music. When I was 11, my dad kept busting me air guitaring and head banging and freaking out in my room.” Things fell into place when she heard Melvins’ classic Stoner Witch record on local college radio. “It brought my punk rock and metal worlds together, and I was just like, ‘Holy shit, you can do all of it. You can do the whole thing.’”

Years later when Spotlights opened for Melvins in 2017 Sarah got to share that experience with them first hand. “It was me and Dale, we were talking about being kids and stuff that moved us, and I told them that he was one of those, and they love it. They love that what they do has inspired people to work hard.”

The respect was reciprocated by Melvins’ Buzz Osbourne: In an email, Buzz tells Kerrang!, “Touring with Spotlights was great, it was fun. I really like the idea that they were a married couple, it was cool to see them working together both on and offstage.”

Shortly after their tour with Melvins, Spotlights released Seismic, their first album for Ipecac. For this record they worked with Aaron Harris, the former drummer of ISIS and an accomplished engineer in his own right. “That was the first time for this project that we didn't record it,” says Sarah. “We wanted to see what it would do for us to bring in someone we trusted to help us.”

By all accounts the Seismic sessions were a success. The album saw Spotlights sharpening their songwriting while retaining the moody atmosphere that made them so intriguing on Tidals.

“I'm a bit biased because we're friends and I was really excited to work with them on Seismic, but I don't see how anyone wouldn't appreciate working with them,” says Aaron, who also played on four of the songs on Seismic. “They're pro when it comes to their music but still easy going and fun to work with. It was a nice creative environment, eating Mexican food and experimenting with hundreds of pedals.”

Still, the pressures of working outside of their own studio and on a tighter deadline ultimately didn’t suit Mario and Sarah. For Love & Decay, they brought the process home.

Having spent years watching band’s in his studio waste time trying to come to a democratic consensus while writing, Mario instead opted for a streamlined workflow that puts the lion’s share of songwriting duties on his shoulders. Then as the songs started to come together he would use Sarah as a sounding board to keep him on the right track. “We know each other so well that I hear her in the back of my head all the time, like, ‘I don't know about that.’"

If the sound and creation of Love & Decay are the result of Spotlight’s musical maturity, than the album’s themes are the result of their life experience. The band’s lyrics are a perfect mirror of their sound, relentlessly bleak in their outlook but marked by wistful optimism. Though Spotlight’s keep their lyrics sparse the words they do include envision a world breaking down under its own weight. Because there are so few words to work with, the songs on Love & Decay are intentionally vague about their meaning but you can pick out references to the abuse of animals (Until The Bleeding Stops) and to a sense of loneliness during the end of the world (Far From Falling). Underpinning this is the cold fact of mortality, knowledge that no matter how sustainable or ethically sound your life is death is coming for you all the same. Crucially, the album’s final tracks dig their way through this anxiety into something approaching acceptance. 'And everyone forgot you / And everything remained the same,' Mario and Sarah sing on the album’s final track, their voices a soft breath quickly blown away by the force of their instruments.

On Mountains Are Forever, another late Love & Decay track, starts at warp speed before slowing down to a more meditative pace. The song captures the album’s mood in miniature; distress giving way to calm acceptance. For the track’s music video, this change is speed is matched by a series of images meant to signify the passing of time.

Watch the exclusive premiere of the video below!

Spotlights have taken the old adage about burning out being better than fading away and flipped it on its head. Love & Decay posits that a life that fades out is no less valuable by dint of its inevitable end. Even if this message runs counter to the “live fast, die young” attitude of most rock fans, Spotlights have had no trouble resonating with their audience

“Numbers-wise might not be a lot, but comparatively to our previous releases it's like… 400 per cent more,” Mario says in regards to Love & Decay’s sales so far. “It's a good start.” Over the phone Mario betrays no real excitement over this massive increase in interest. He and Sarah are taking each step in the band’s rise in stride. They remain grounded, a lesson learned from touring with their former idols.

“Touring with Melvins, we learned so much about how to be a sustainable band these days. You don't need a lighting rig and an LP when you're playing small clubs, you don't need a whole crew or a rider of two whiskey bottles for each band member and fruit and all this bullshit.” Mario says. You really just need water, cash and a van to get to the next gig. You'll make a lot more money, and you'll be able to keep going. Play everywhere and build up little core audiences everywhere as much as you can, because they'll stick with you.”

Spotlights have given their fans every reason to stick with them, and will reward that dedication once they hit the road this summer.

Exclusive: Spotlights' Kiss The Ring, Featuring Allen Epley of The Life and Times

Fall apart to this new track by the Brooklyn echocore act, featuring a guest appearance by a post-hardcore / space rock trailblazer.

Spotlights Are The Dreamy, Heavy Tidal Wave Crashing Into Your Life This Week

What other band has opened for the likes of Deftones, Melvins, Pelican, and Glassjaw in just its first few years?