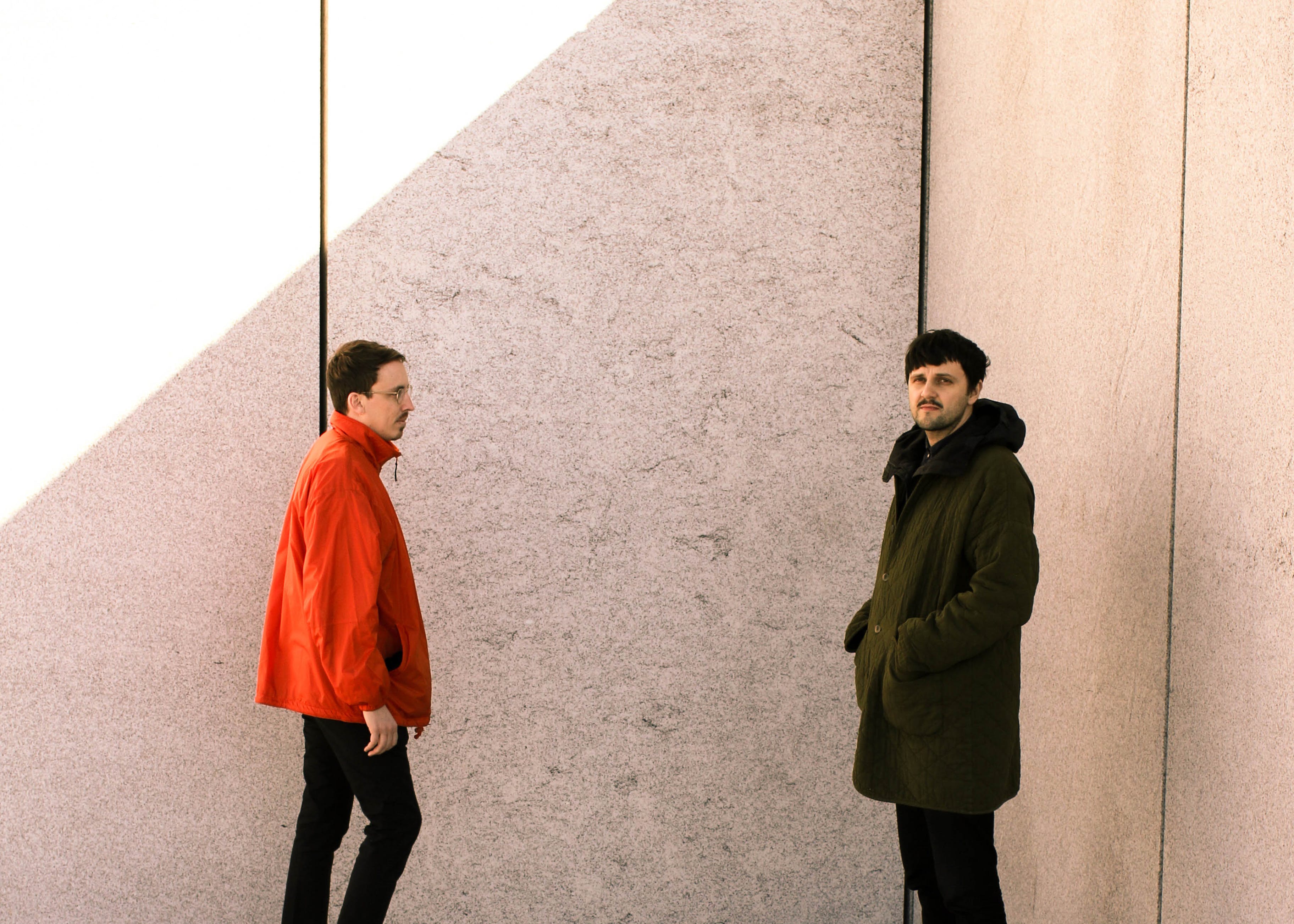 It feels appropriate that Wreck And Reference –- the LA-based experimental two-piece consisting of Felix Skinner and Ignat Frege –- wanted to conduct this interview over email. After all, the pair’s forthcoming fourth record, Absolute Still Life, moves even further away from the black metal-inspired soundscapes of their 2011 Black Cassette EP and 2012’s debut full-length Youth (pronounced No Youth) and into a kind of futuristic, electronic dystopia fitting for the Gmail generation. Yet rather than celebrate those advances, the album is the sound of the systems that propel society collapsing in on themselves – the fetishization of technology and the insidious nature of the corporations who make it, alongside our willing disregard for our own privacy. It’s the sound of the death of critical thinking and rational debate, and an album that reflects the rise of far-right demagoguery alongside the increasing absence of truth of those in power, all mixed with sense of abject human loneliness and haunting, existential despair at the state of humanity and society. All of which can be heard in Sturdy Dawn, the second track on their new album album which you can stream exclusively below. So read along to Felix and Ignat’s fascinating email answers before the infrastructure implodes and we’re left in a new dark age, scrabbling for scraps of food, trying to remember how to love.

From the very beginning of Wreck And Reference, your music has defied categorization, yet at the same time your songs always sound like W&R. What would you say the most important part of your sonic identity is?

Ignat: Experimentation is a really important part of the way we work, so I would hope that if you removed the vocals and acoustic drums from previous records, they would sound pretty different. The drums and vocals make the business more continuous. It is harder to change the way you sing or play the drums than just pick out a whole different set of sounds on the computer. The computer is really the sonic identity and then we try to get our stupid bodies to accommodate whatever it’s doing in the weirdest and most interesting way that we can.

Felix: The day we can accurately describe our sonic identity is the day it dies. That is our curse. Unfortunately, categorization is a burden carried primarily by the already-downtrodden record store clerks of the world.

Ignat: I saw someone write online that our music is what happens if ‘NIN had a baby with The National,’ which I thought was super funny and overwhelmingly accurate.

You’ve really expanded on the electronic aspects of your sound on Absolute Still Life. What drew you further into that realm?

Ignat: We love electronic music. That’s the weirdest and coolest stuff out there. Go find a cello that sounds like mud being sucked through an airplane engine. You won’t be able to cause a cello has been making the same sound for 500 years. It sounds like a cello. Actually, what I want to do instead of writing music is use AI to learn our old albums and dump whatever new music I like into the algorithm, then have it regurgitate new W&R albums until the end of time while I blissfully retire into a brain-in-a-vat-type situation.

Felix: When the last guitar has burned, and the last amp corrodes on the trash heap, it’s comforting to know that the algorithm will still be plugging away, making music for itself.

Sonically, it comes off like a very cold and lonely record. Was that something you were striving for, a by-product of your increased use of electronics, or a happy (!) combination of both?

Felix: It wasn’t something we discussed, but as we were writing the record a sound emerged and we chased that. Cold and lonely isn’t far off though. Who doesn’t feel cold and lonely these days? Actually, I’m very warm right now.

Ignat: We talked about not using acoustic drums on Indifferent Rivers Romance End but didn’t end up doing it. Couldn’t quite figure out a way to make it work, or maybe we got scared, I don’t remember. There’s barely acoustic drums on Alien Pains and the ones on there are sampled from a different song. We’d been floating towards this end for a long time. It might continue, maybe it won’t.

Lyrically, too, these songs seem more involved – rather than fragments of images, they come across more like short stories or narratives that truly explore all facets of the darkness that encompasses them. That’s especially true of Sturdy Dawn. What were you searching for? And did you find it?

Ignat: You’re the second person to bring up that our music has become more narrative in an interview, just this week. Sturdy Dawn was written in two parts, the first part I was thinking about when I sold all my furniture in Sacramento, before I moved to LA four years ago, and I was anxiously pacing back and forth in my empty room, listening to music, with an open box of roofing nails on the floor. The first part is personal and is meant to evoke some nostalgia about a moment that was very future-facing. It is a sort of manic inner monologue, with a heap of irrationality. The second part is about finally the arrival in the future and how immaterial the past was in to that journey. Just a chaotic appearance of the body after a distance the body didn’t actually travel, like waking up 10 years later and not knowing how you got there. The second part is also about the structures of power and how they affect that sensation of arriving, the relationship that we have with those in power and the physical world that holds us hostage, and how all of these factors shape our ideas of the passage of time, the present, and the future.

The cover is in stark contrast to any of your previous artwork, as well as the music on this record. At the same time, it feels kind of rancid and rotten. Can you explain the intentions behind it?

Felix: I could say something like it represents the baffling and toxic feast of modernity, but we really didn’t approach it with that strong a concept. We just wanted to render a sickly, unreal still life. We’re glad that came across.

Ignat: I thought it would be cool to visually reference classic still life, of which there are about one billion. None of the stuff in those paintings was ever super appetizing. Like eviscerated, strung up rabbits and seafood, rotting and gross probably ten minutes into the painting.

The frailty of life (and the physical body) and the human condition have been themes featured prominently in your work, almost as if life itself is an affliction to be tolerated rather an opportunity to be celebrated. Would you say that’s true, and if so, why do you feel that way?

Ignat: A decade ago we had different attitudes towards life that might have been more accurately described as toleration. We’ve changed a lot since then, been changing. You know, growing up, grey hairs in the beard, stuff like that. I think if you’ve been depressed or anxious for a long time, even though it’s extremely hard to escape those modes of thinking, you might be able to make an effort. There’s hardly a point to living an entire life, year after year after year after year, as a martyr for the chemicals in your brain or your bad habits. Whether or not people truly have a choice in all that, in the absence of free will, that is a different discussion. How to feel better, I don’t have the answer to that. I don’t think it will ever come to be a celebration, but I definitely now view it as an opportunity to do something. You might as well try to come to terms with existence and do something, if you’re still here.

There also seems to be a deep dissatisfaction with humanity and society on this album, as well as people’s obsession with trivial, meaningless things in life. What do think the antidote to that is (if there is one)?

Felix: Socialism. That won’t fix the broken psychology of people, or the pointlessness of life, but it would be nice to see people’s suffering turned down a notch and to get off this express train to hell we’re on.

Ignat: So much to unpack. I would add Democratic* to the word Socialism because if you’re a child of the USSR like I am, you’re kind of wary of Socialism hanging out by itself. Increasing the safety net is going to make some improvements to American society, at the very least. It would probably improve people’s life satisfaction levels too, if they are not constantly struggling to make ends meet in a system that is essentially a rat race to squeeze profits. People’s obsession with the trivial? Good luck getting rid of that. Trivial is Homo sapiens' middle name.

How much does the darkness and despair of your music extend into your everyday lives?

Ignat: To be human and experience life is to fall down a seemingly infinite pit of emotion. We are overdosing on thoughts and emotions constantly. The body is small and finite but the mind is an Olympic swimming pool pumping in every second. Call it defective, pessimistic, or realistic, but the strongest emotions for me are negative ones, poignant ones. And they draw a lot of inspiration. All that stuff needs a place to go and we choose to put it into the music. It doesn’t necessarily mean that that is who we are all the way through, but I haven’t learned how to write happiness. If anyone has any tips on that, please let me know.

Absolute Still Life is out on July 19 via The Flenser, and you can preorder it now.