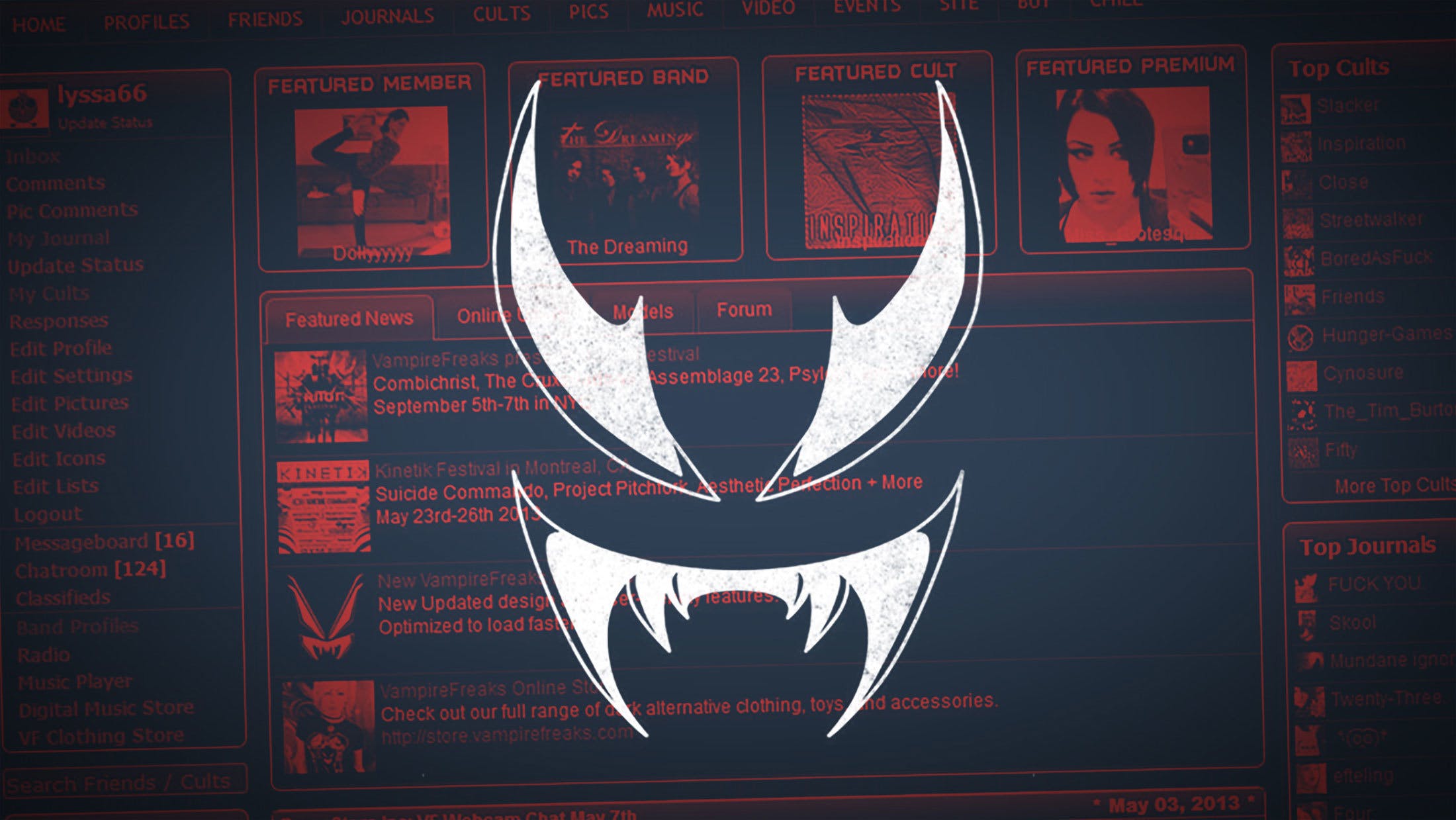 After two decades of ruling the online underworld, alternative culture platform Vampirefeaks.com has announced its forthcoming closure. What began as a small cluster of industrial music fanboards grew enormously over the span of 20 years, somehow outlasting the larger alt-web communities of LiveJournal and MySpace. It became a truly unique platform for alternative scenes and its young creatives, uniting all subcultures of goth from across the world to bond over their mutual fascination. But this July, founder Jet Berelson announced he would be sealing the crypt doors for good in February 2020.

Kerrang! reached out to both Jet as well as representatives from Dark Side Of The Con – their surviving event – but we were met with little response. With reams of truly awful user reviews on Site Jabber and rumours of intense drama, it’s perhaps unsurprising. But despite these clouds of negativity, VampireFreaks genuinely wasn’t doom and gloom for everyone (aside from the obvious goth getup).

Hosting many death-rock, darkwave and industrial tracks that are impossible to find anywhere else, VampireFreaks remained an essential stop for alternative music fans. As well as giving new bands the opportunity to recruit other like-minded musicians, bigger artists including Combichrist, Emilie Autumn and The Birthday Massacre all had active accounts that allowed fans to easily interact with their favourites.

Model and DJ Becky Strauch tells us it’s the place she found all her favourite music at the time, noting “I’m actually making a living from DJing and the mood I prefer is reminiscent of the dark electronic bands I first discovered on VF”.

Conversely, user ExEmoGirl fondly remembers creating From First To Last ‘roleplay’ accounts that borderline on catfishing. “I found (guitarist) Matt Good’s closed VF account and decided to recreate it,” she admits, “and had received a few messages from fans.”

Ex-VF user Clark Gray used the platform to interact with others a little more sincerely, telling Kerrang! that it was the “only way to connect with fellow greebs, because there’s not much other chance when you live in rural Scotland."

“I met loads of people from it. There were cliques on there that would gather up to vote people a 1 (users can be rated from 1-10), and the fallout from it would be huge,” remembers Clark. “One time in Aberdeen there was a huge fist fight over people voting 1s on VampireFreaks and for posting trash talk in the Granite City Goth group.”

Despite the bust ups, yearning for goth popularity did have one major advantage: “We all learned to code from it,” says Clark, “because if you wanted that sweet, sweet greebo clout you had to have a big presence.”

His brother Dean Gray who was once a Top User on the site agrees, citing the platform as being his King Of The Internet stage. He tells Kerrang! that he’d use VampireFreaks to speak to people from all over the world in an age before smartphones.

“You could express yourself however you felt you wanted to at the time, make your own profiles and such. I met my two best friends from it,” says Dean. “One of them, Colin, now works in web design, which is definitely because of [VampireFreaks] – he got into it because I was teaching him bits and pieces of web design and wanted to make cool stuff. The other got a job at (multinational audit company) PWC; she didn’t know Excel when she started and quickly realised it was very much like HTML, so rapidly excelled there.”

Now a professional photographer, Dean credits the site as being the reason for him getting into the practice: “[VF] got me interested in wherever art meets technology. I’m studying computer programming with cyber security now, probably because of it too.”

READ THIS: When Russia tried to ban emo

We spoke to Dean’s friend Colin who currently works as a front-end web developer, crediting building VampireFreaks profiles as an early lesson in coding.

“VF was a well-known social site for the alternative teenagers in Aberdeen. I was involved with creating profiles for my friends and also admining a couple of the ‘cults’, (the equivalent of a Facebook group) as well as starting up the one for Aberdeen,” recalls Colin today. “Because of the vast amount of customisation you could do on your profiles at the time, this took me down the route of learning basic HTML and CSS.”

“VampireFreaks was a haven for young baby goths who were being bullied a ton in their real lives, because it gave a platform for you to be yourself without fear,” says photographer Emily Rose England. Choosing to seek friendships through sites like VampireFreaks helped to shape Emily’s personal identity, crediting VF as being the perfect solace for an alternative teenager growing up in the early 2000s: “I lived with someone I met on there and have been on holiday with another, I’m still really good friends with them both to this day.''

Reddit user Malkavian87 ran the esteemed Gothic International cult of over 4,000 members, successfully bringing together many that identify with goth subculture. He tells us the group has moved to a permanent Facebook group under the same name, although it halved in numbers during the transition.

Though members were lost during the platform movement, it truly doesn’t mean goth as a subculture is on the out, merely finding other crypts to haunt. Today’s alt teens have found community across Instagram and even TikTok; platforms that aren’t specifically designed specifically for subcultures, yet allow people to communicate in their own style and where niche content is allowed to flourish.

In the final months before VampireFreaks puts a metaphorical wooden stake through its own heart, it’s evident the site is noticeably growing slower and with more error messages. All users are advised to remove any music and photos from the platform before it’s too late.

And though the original website for all things goth is closing down, the subcultures associated with it remain far from extinct and the influential impact VF had on goth won’t be forgotten. There are now plenty of online alternative communities hidden through the big social media sites as well as events, festivals and club nights that won’t be stopping anytime soon. Failing that, we could all meet in the graveyard at midnight.

READ THIS: Why Pete Steele is the ultimate fantasy goth boyfriend