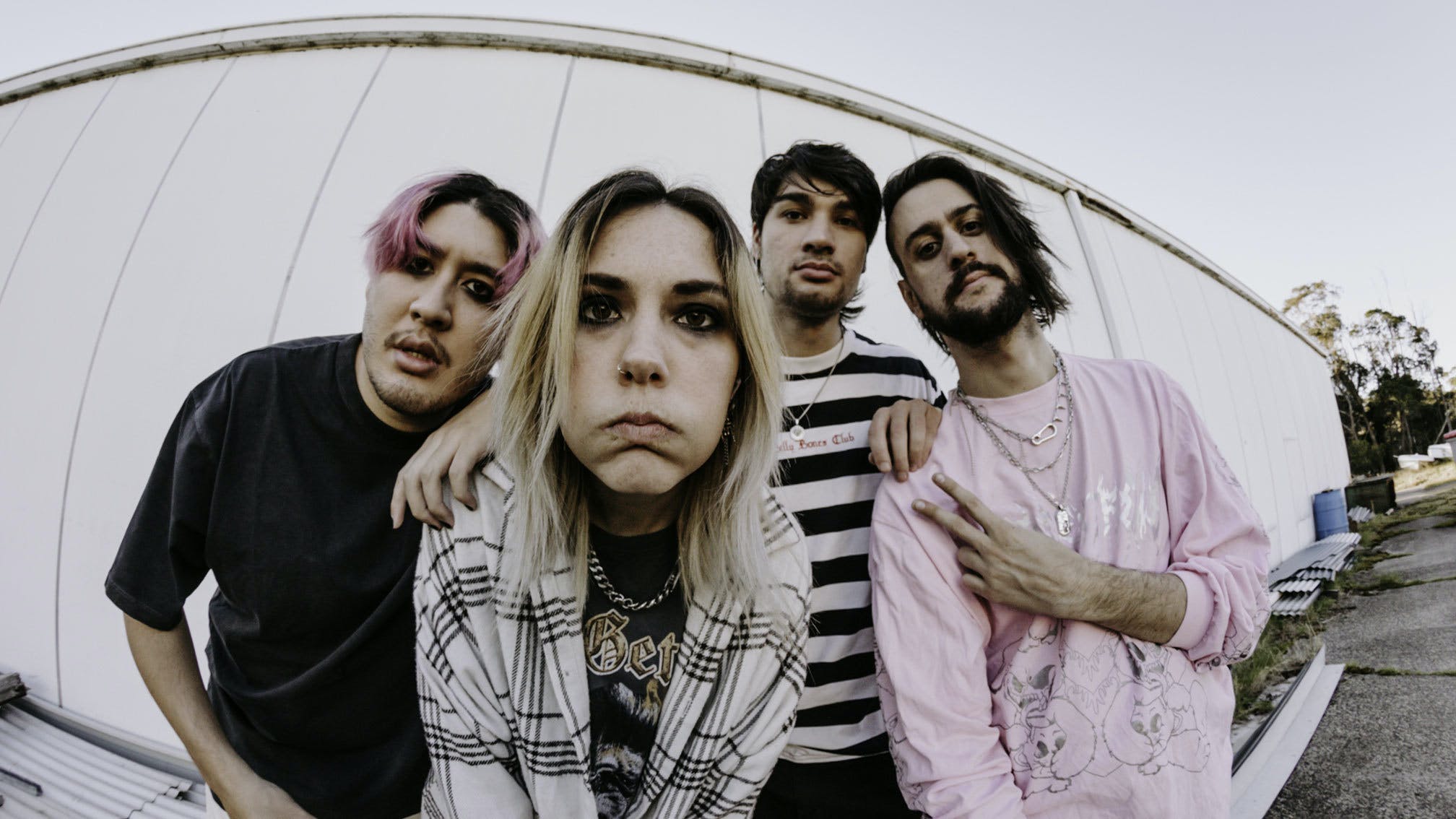 Stand Atlantic’s Bonnie Fraser might have gained British citizenship and relocated to the UK for love, but she’s still as Australian as they come. “We’re not here to fuck spiders!” she tells Kerrang! when we ask what people can expect from the pop-rockers' third record, F.E.A.R., announced this week, before clarifying: “That means we’re not here to fuck around!”

Details of the album – the title of which stands for ‘fuck everything and run’ – came accompanied by a brand-new track, pity party (ft. Royal & The Serpent), which follows on from lead single molotov [OK], released back in November.

With the two new additions firmly nestled into their set list, the Sydney group are now touring the States with Set It Off, where their bubbly vocalist/guitarist/lyricist took some time out to chat about album number three, and tell us what had her wanting to leg it from life...

Hey Bonnie, let’s start by you telling us about your new single pity party...
“It was one of the first songs we ever wrote for the record, and it's quite a lighthearted song – it's about people who just stir drama because they’ve got nothing else to do in their lives. Then they take it out on you and you’re just like, ‘Mate, leave me out of it bruh!’ Is it aimed at anyone in particular? I’ve definitely come into contact with a few of those people in my life (laughs). I’m not naming names, but they exist...”

What other lyrical themes can we expect to hear?
“moltov was like our stock little punk song that we had to get our aggression out on – that's about fighting the system, basically. There’s just a lot of frustration, angst and also a bit of hope on the record. Thematically, this record is basically a diary of everything I’ve been feeling these past two years. I can’t put it any simpler. I’m not gonna pretend it’s this amazing piece of art I’ve worked so hard for, it’s literally like, ‘Dude, I felt like absolute shit and this is what you get!’ (Laughs) I'm over it. I hate that whole Hollywood bullshit thing [people in the industry portray], it’s like, ‘This is my life, have it. And I hope you like it.’ I’m not this larger-than-life amazing person. I’m literally just a regular person who writes songs ’cause they feel like shit, and I don’t wanna sugarcoat that, I just wanna be real.”

So this record is you being done with everyone’s fakery and carefully-crafted Instagram highlight reels?
“Exactly! I’ve been so shit with social media recently – because I’ve been depressed for two years (laughs) – but also because what’s the point? That isn’t my real life, it’s highlight reel. I could show you a picture of me the time I spent 15 hours in bed and didn’t move, eating chips… but nobody wants to see that! Why? Because they don’t want to be faced with their own reality.”

Was that what life looked like when you were depressed?
“I am not kidding, yes! Because it wasn’t just my career, but my personal life was in the absolute toilet. It was so hard. And it looked like me in my mum’s basement in Australia and it was depressing as fuck (laughs). There's a track on the album called Doomsday – that’s the first song on the record, and it literally just encapsulates the entire scene of me in that room.”

What was going on in your personal life?
“I don’t wanna talk about it publicly, but I’m in a long-distance relationship, and during COVID, and when mental health is at play it is a fucking struggle! Such a struggle. Not even just my mental health, but my partner’s as well. And it’s just… if I go into any more detail, shit’s gonna hit the fan, so I can’t (laughs). But just know that it was shit. I definitely channelled it into a song or two. XO and Blood Clot are the two that sum it up the best. I hope people like those.”

And what got you through those dark, chips-in-bed days?
“I was trying my best to listen to as much comforting music as possible, but I was also watching TV like a sad-sack. The only thing that actually dragged me out was being able to do something in the day, like if I was going to write with Stevie Knight [longtime Stand Atlantic producer/collaborator], that would be what got me out of bed.”

You’ve spoken about having imposter syndrome in the past – is that something that got better or worse with this record?
“I think it just stays the same for me! I just doubt myself all the time, constantly. And it’s a running theme throughout my whole career – I just never feel like I’m good enough. But I’m trying my best. It wasn't just that with this record, though, it was everything… During the panini [pandemic] I just felt like no-one cared, like absolutely no-one’s gonna care. I felt like my whole purpose in life was taken away, and I was really angry at everyone around me, which wasn’t good. I was like, ‘You guys are trying to make me write songs and I haven’t even lived!’ I was angry at the industry as a whole, at people being fucking fake all the time, and a lot of the frustrations and anger have definitely come out on this record. That’s not to say it’s heavy metal or anything like that (laughs), but there’s definitely a lot more angst on this record than any of our others.”

At what point in the writing process did the anger subside?
"Once the songs were done and we decided on them. And, I hate to say it, but once I had the validation of the guys and our manager, being like, ‘These songs are sick!’ Once we had some feedback and everyone was liking what we were doing we started seeing this as one of our most special records to date.”

What makes it the most special?
“Because it was the hardest one! And just knowing what me and the guys have been through in the past two years, it’s almost like a relief. It’s a place to put all of those shitty feelings and shitty times, into an album, and then you can let go of it. That's what I’ve done my whole life; that’s what I do with songs, it’s a way for me to get rid of a feeling and put it to bed. So that’s why I think it’s special.”

And since it’s literally called F.E.A.R., do you have any worries about it coming out?
“Yeah, that people will hate it (laughs). No, I’m quite confident with this record, but I’m scared to admit that, because if I admit that, I feel like people won’t like it for some reason – that's how my brain works. But I do love this record! It's my favourite one we’ve done so far. Which is what we should be saying. If you’re not writing your favourite album then what are you doing!”

F.E.A.R. is due out on May 6 via Hopeless Records. Stand Atlantic tour the UK in February.