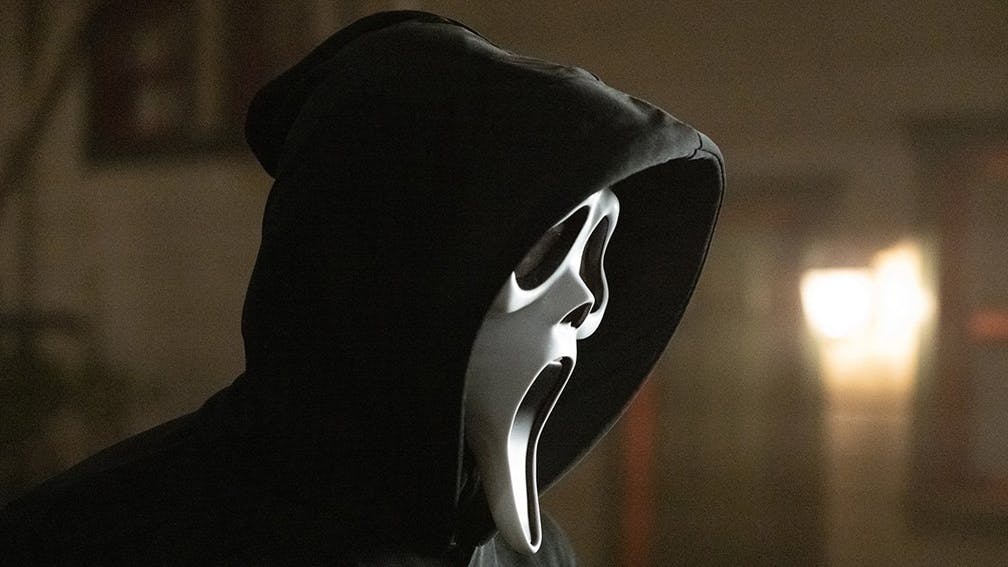 Think on this: 25 years before the release of Wes Craven’s original Scream in 1996, almost none of the scary movies from which it took convention and reference had actually been made yet. The idea of a horror movie about horror movies wasn’t a new one – the director himself had already done it with Wes Craven’s New Nightmare, where Freddy Krueger came off film set and into the real world – but it drew a definitive line between old and new. It put a massive star – Drew Barrymore – front and centre on the poster, then (spoiler alert) offed her as an opening throw. It raised questions about the impact of film violence on the world. It acted as a bloody love letter to scary movies themselves. It tore up the rulebook by knowing exactly where to rip.

A quarter of a century and three sequels on, Scream is itself older than the things it observed and subverted. It has also, in some ways, become in itself a convention, writing horror lore and laws that it once sought to display with a knowing wit. Each time, the identity of Mr Ghostface became a more stupid reveal, bogged down in complex backstory that made you not care who it was the way you did the first time. Each time, the meta nods and layered critique of horror movies versus the media and real world violence stopped being wise and became simply annoying by the time Scream 4 rolled around. And after the first one, you can't kill off the massive star on the poster – Drew Barrymore – as an opening throw. As with the slasher sequels of the ’80s and early ’90s, the plot was just dead air between watching teenagers get stabbed to death.

What Scream (the 2022 one) does – referred to in the film itself as a “requel”, a movie universe act of going back to the original in a series to start fanning out again – is cut through much of the built up stodge. It reignites that original feeling of whodunit thrill and wait-for-it bloodlust with the same spirit as the late Wes did the first time around. In this, it searches for the same early love of horror he was.

We return to the town of Woodsboro, a cinematic Midsomer where murder comes with the postcode, where once again a killer in the iconic outfit is on the loose. And, indeed, on the phone using a voice changer. Naturally, this leads to teenagers musing on how it’s playing out to the rules of a horror film, and acts as a homing signal for OG characters Gale Weathers, Sidney Prescott and former cop Dewey Riley to return home to confront this new demon.

If the set-up is Very Scream, the execution is specifically Scream 1. The massive body count and occasionally bonkers sequences are matched by the macabre thrill of the kills, both in setup and gore. The Rules Of A Horror Movie stuff and self-referential movie-within-the-movie Stab series are used far more smartly than in any of the series’ later outings (at one point the ludicrousness of the later Stab sequels is openly mocked). In terms of tech, we're not back to the didn't-date-well "What are you doing with a cellular telephone, son?" police questioning of the original, but the over-use of new technology that plagued the fourth movie (yes, we get it, everyone has a video camera now, stop going on about it) has been put back in its box. And the Easter eggs – Nick Cave playing on a car stereo, street addresses – are for the sort of super-nerds who end up being the ones who done the murders anyway.

Scream’s biggest reference to itself is when one character all but says that they knows what fans want from it: blood, violence, smartly raised eyebrows and a decent puzzle over who the killer is. This is where it succeeds. Previously the franchise stuck to the rules of sequels too rigidly, including the ones where it’ll end up over-reaching and expanding its world into ridiculousness. This time, by focusing on good (if occasionally of a well-worn type) kills and keeping you guessing, questions that could trip it up – why aren't the OG cast in jail for killing all the people they have? How come hapless pincushion Dewey isn’t just a brain in a jar at this point? Why do the Woodsboro police never secure anything or do any paperwork or proper interviews about loads of murders? – are just ‘yeah, whatever’.

The behind-the-curtain impact of the first Scream can, of course, never be repeated. Horror itself has moved on into stranger new places where convention is broken all the time. But that’s not the point here. In some ways it’s tying up loose ends and sending the franchise off on a solid full-stop (as the dedication “For Wes” at the end highlights). Fittingly, it's also the best Scream movie since Scream.

Scream is released on January 14 via Paramount.