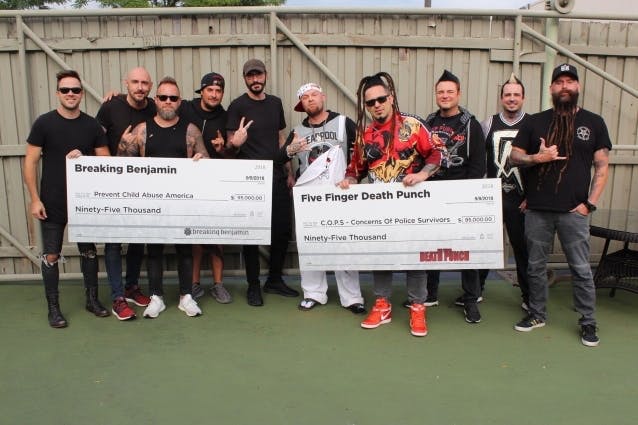 People talk a lot of shit about Five Finger Death Punch, and sure, they're not exactly Fugazi or Sunn O))), but that probably doesn't matter, because a) not everyone likes that stuff and b) they - along with their tourmates Breaking Benjamin - just chucked $190k from their recent tour profits at some charities close to their respective hearts, just because.

FFDP donated $95k to C.O.P.S - Concerns Of Police Survivors — whose mission is rebuilding shattered lives of survivors and co-workers affected by line of duty deaths, through partnerships with law enforcement and the community. Breaking Benjamin in turn donated $95k to Prevent Child Abuse America, which counteracts the abuse and neglect of our nation's children by promoting services that improve child well-being and developing programs that help to prevent abuse and neglect.

"We've had the privilege to work with veteran and police organisations for years," explained FFDP's Zoltan Bathory. "Today we are making this donation as a token of our respect and gratitude to those who committed to protect and serve, to those who signed up to bravely hold that thin blue line between 'civilization as we know it' and 'lawless savagery and chaos.' Unfortunately, every 58 hours a police officer who believes in something sacrifices everything and dies in the line of duty. C.O.P.S - Concerns Of Police Survivors helps and benefits the families of our fallen heroes in blue.

"We're honored to be able to utilize the thing we love to do most as a tool to help children in need," says Ben Burnley of Breaking Benjamin. "Organizations such as Prevent Child Abuse America remind us that we are the voice of the voiceless and positive change is possible in otherwise hopeless situations for these kids. We offer our utmost gratitude to every fan who bought a ticket this summer and made a difference. And last but not least, thank you to the selfless people at Prevent Child Abuse America for inspiring greatness and all that you do to make the future brighter for so many."

We salute both bands for putting their money where their respective mouths are.

Here's FFDP doing what they do: