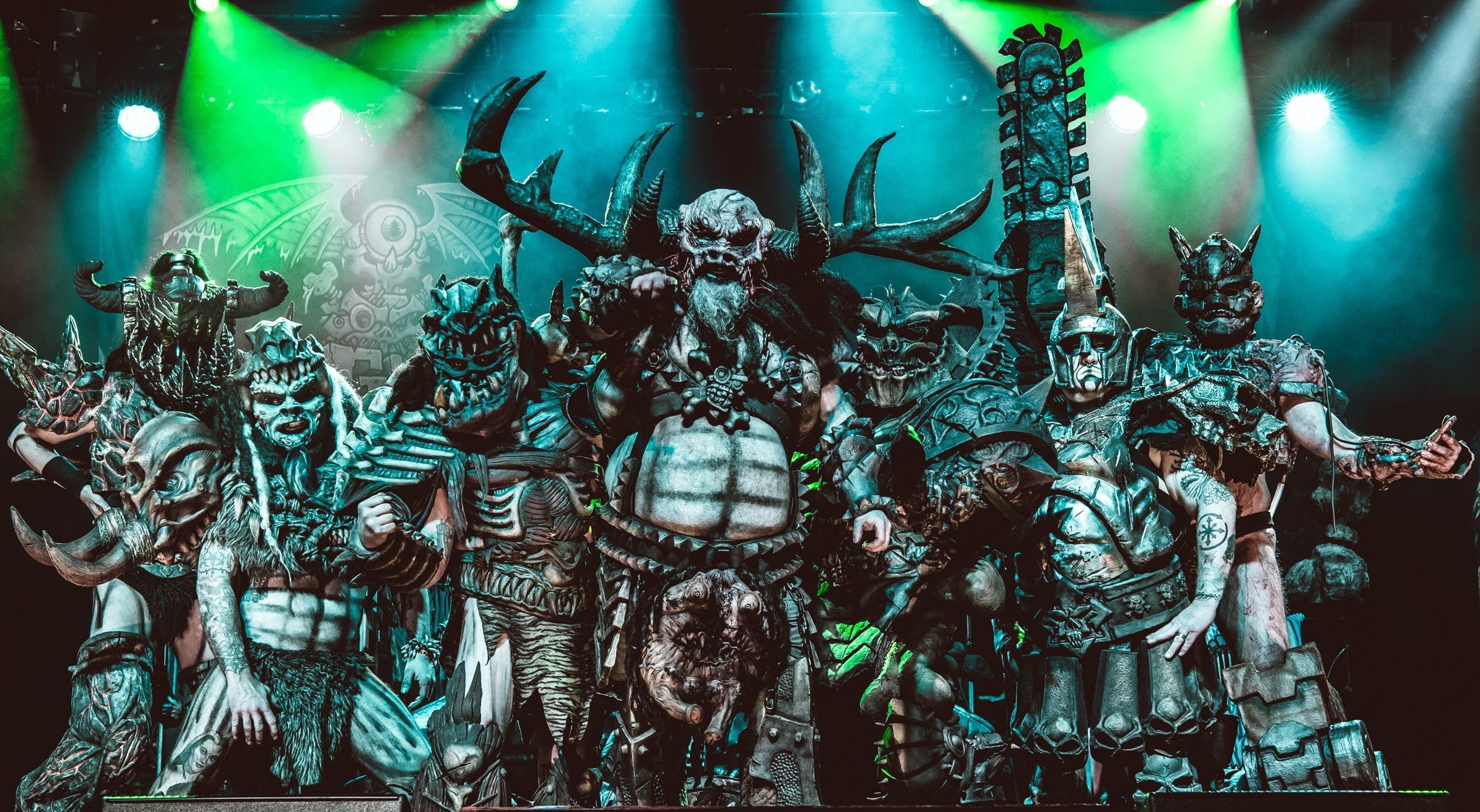 New York’s Greenwich Village is alive with Halloween cheer this October the 31st. Hordes of tiny princesses and superheroes crowd the streets, while good-natured cashiers and shopkeepers hand out bite-sized candy. But outside Irving Plaza, things are a little more menacing. The line stretching down the block is a madcap mixture of anxious blue-collar rockers and grinning metalheads, all slathered in greasepaint and squeezed into elaborate costumes. Everyone buzzes with excitement over what is truly a perfect storm: Halloween night, New York, a sold out show, and of all the bands in the world, Antarctican alien thrashers GWAR. Whatever else happens tonight, one thing is certain: there will be blood.

“God, hundreds of gallons of blood,” says GWAR’s lead singer, Blothar, a few hours before the show. The porcine vocalist snorts and impatiently picks at the upper right-most of his four cock-udders, antsy for the moment he is allowed to start fucking his fans to death. “But not just blood! There’s puke, piss, semen...GWAR is a rainbow.”

Above: Blothar, singer of GWAR.

There’s a comfort to GWAR that stokes the good humor in tonight’s waiting attendees. In an unsure world lived primarily on the Internet, where everyone seems offended by everything, it can feel as though there’s no place for a hands-on weirdo to have a giant monster spray blood directly into one’s face. Given the depths of their depravity and the messiness of their performances, GWAR seems like the kind of band who shouldn’t be able to survive -- and yet here they are, giving fans exactly what they want, despite society’s setbacks.

“Great White ruined pyro, so we can’t do that anymore,” grunts lead guitarist Pustulus Maximus, his blue face curled into a sneer of contempt. “We used to fly planes right into the club, but 9/11 ruined that. That’s what I wanted to call this show -- not Gwaroween, but 9/11 Part 2! People always say never forget, but hell, I forget where I put my wallet half the time.”

The overjoyed fans trundling into Irving Plaza are certainly dressed for disaster. There are Beetlejuices and Venoms, scarecrows and male nuns, two or three Ricks without Mortys, the inevitable King Diamond, and even a fuckin’ mime (one wonders why, with all the costume options in the world, anyone would go mime, but hey, it’s Halloween…). Many fans wear white, so that they can later show off their bloodstained clothes. A few audience members even sport touching GWAR tribute garb, from a slavishly-painted full Scumdog outfit to masks of deceased frontman Oderus Urungus. The homage to tonight's headliners is touching, but to GWAR, Halloween is just another day to be themselves.

“I’ve accidentally celebrated Halloween before,” says Pustulus with a shrug of his shoulder-mounted mammoth skulls. “It was sort of a ritual, but mainly I was just choking out this homeless person. But not for any kind of spirits or anything. I mean, I was imbibing a lot of spirits at the time.”

The venue is already pretty packed by the time Austin stoner rockers American Sharks take the stage, and the pit gets respectably rowdy from the first song onwards. The band do their part, playing overdriven riffs and big doomy breakdowns with ample vigor, endearing them to the kind of working-class crowd that loves a shock rock show. Overall, they’re not exactly what the audience is looking for (at this point, nothing but GWAR will satisfy them), but they seem to know that, and play a tight, entertaining set full of good humor and solid stage banter.

Ohio metalcore staples Miss May I take the stage in complete Avengers costume, with frontman Levi Benton making a hilarious Thor with his padded muscles, flimsy cape, and bleach-blonde wig. The band powers through one rager after another with admirable energy, and even their angstier songs are blasted out with smiles on the band members’ faces.

The crowd, hungry for high-octane riffs and double bass, eats it up, and goes through every mosh formation in the book--circle pits, wall of death, the whole nine yards. At any given time, there are as many feet in the air as hands, as fans crowdsurf by the dozens into the arms of the raincoat-clad security guards. It’s a necessary injection of metal that kickstarts the night’s true bloodthirst.

Thus begins a deluge of ripping heavy metal, flailing bodies, and jetted bodily fluids that paints all of Irving Plaza red. A sense of complete abandon overtakes the crowd, and the pit rages almost inappropriately hard as fans throw themselves brutally against each other and shove forward with hands outstretched to receive the gruesome baptism of GWAR.

The Scumdogs stomp and bellow through a setlist of new classics (“Fuck This Place”, “Viking Death Machine”) and old-school jams (“Saddam A-Go-Go”, "Immortal Corruptor", and an encore including "Sexecutioner"). They also find time to rip Donald Trump's belly open, tear a woman's breasts off, fight the robotic Sawborg, plunge a giant cross into a priest's asshole, and throw a few lucky fans and podcast contest winners into a giant meat grinder.

When the set finally ends, everyone in Irving Plaza looks as though they've run an obstacle course through a slaughterhouse. Every piece of white clothing is stained with crimson blood and neon green semen; some fans are entirely soaked with gore, to the point where their hair drips snail trails behind them.

And yet, every audience member wears a grin. There are 364 other nights in the year to worry about the rest of the world, but Halloween is for wearing masks, indulging in sick fantasies, and showing the world just how beautiful it is to be sick as fuck.

"The Marquis de Sade once said that beauty is commonplace," posits Blothar, "but true, spiritual ugliness...that’s a rare gem. Like, when you find a woman who makes you just want to throw up in your mouth a bit -- that’s who you want to fuck."

And the bands joining the likes of Panic! At The Disco, Of Mice & Men aaaaaaaaaare…