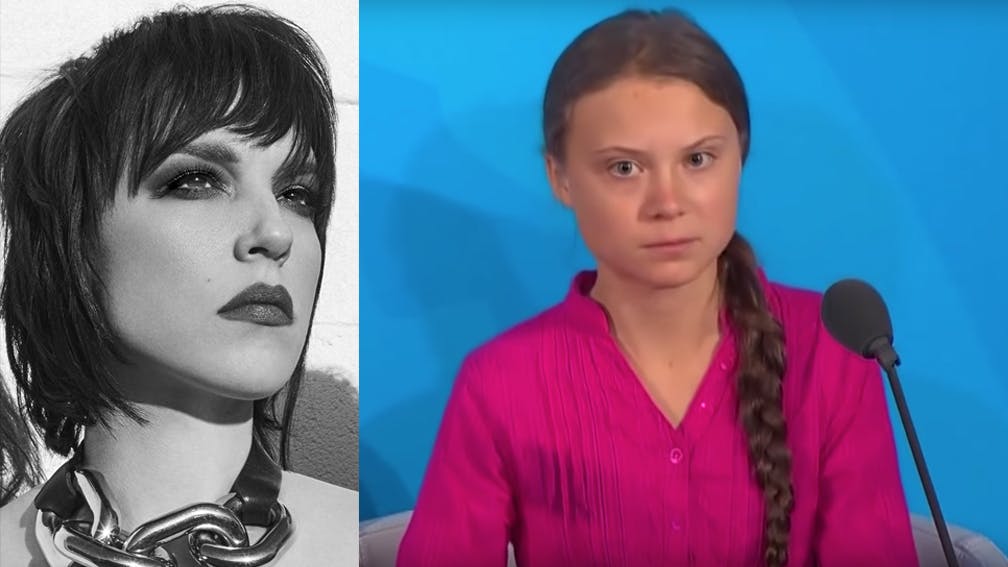 With the likes of Architects' Sam Carter and Angels & Airwaves' Tom DeLonge praising Swedish environmental activist Greta Thunberg following her United Nations speech on September 23, Halestorm vocalist and guitarist Lzzy Hale is the latest rock star to lend her support and encouragement to the 16-year-old.

In a long and insightful social media post, Lzzy referred to Greta as "our modern day Joan of Arc", before comparing her to the likes of Frank and Rosa Parks.

Our modern day Joan of Arc. @gretathunberg Thank you for your candor, grace, logic and beautiful anger. Wield your sword. You are sitting at a round table of young women who have inspired and shaped humanity.

In 1960 at the age of 6, Ruby Bridges became the first black student to attend William Frantz Elementary School in New Orleans. The first-grader faced protests and riots/had to walk to school accompanied by federal marshals. She became an icon in the Civil Rights Movement. A German-born Jewish girl, Anne Frank rose to fame following the publication of the diary she kept while hiding from the Gestapo. After her family was discovered and arrested, Frank died at Bergen-Belsen concentration camp in 1945 at the age of 15. Her father Otto the only surviving family member was moved reading her diary after the war and published it.It has been translated into more than 60 languages. Malala Yousafzai is a Pakistani human rights advocate known for her activism in promoting education for girls. In 2012, when she was just 15 years old, a Taliban gunman shot her in an assassination attempt in retaliation for her work. At the age of 17, she received the Nobel Peace Prize, becoming the youngest Nobel laureate. Nine months before Rosa Parks' famous arrest, 15-year-old Claudette Colvin stood up against segregation in Alabama by refusing to give up her seat on a bus in Montgomery. She was arrested, and a year later was one of the original plaintiffs in Browder v. Gayle, a case that led the U.S. Supreme Court to declare bus segregation laws in Alabama and Montgomery unconstitutional. In 1963, 9-year-old Audrey Faye Hendricks joined thousands of fellow kids and teens in the Children's Crusade, a nonviolent demonstration in Birmingham to stand against segregation. Hendricks spent a week in jail for her activism. Images from the Children's Crusade highlighted the violent response from local authorities &caused outrage around the world. And English author Mary Shelley was just 18 years old when she wrote Frankenstein, which many credit as the origin of science fiction! Who run this mother?

Read this next: Lzzy Hale: “I encourage all of my young ladies: don't just be a superhero, be a female superhero”

In a follow-up comment responding to people who have been critical of Greta, Lzzy also added:

Let me just pose this notion. What if this is not about politics or agendas, or campaigns, what if it’s not left or right? What if this is about the big picture? About how we all breathe the same oxygen? And honestly… to all the people who think this is propaganda… so what if it is? Good! I applause Any political side or “agenda” that promotes a positive change for one of the biggest world problems… its a Great thing. Don’t be asshole. And as far as Greta is concerned, can’t we error on the side that she really is actually an impassioned young woman trying to make the world a better place? Don’t cut her down or discourage her. You all talk about her childhood being ruined, the only way that’s going to happen is if she takes to heart all the unnecessary negativity that You people are throwing her way! We need to empower and encourage our young woman to do the impossible. They will be our leaders in the years to come. And for the record, I don’t care if it’s a government plot, or politicians scheming to save the environment. I don’t care if some billionaire’s funded her to speak and promote the coming together of nations to solve our collective problems. Good! I hope more billionaires and political parties decide to do this! Stop making everything about You. It’s not about you or your “feelings”. This is about the next generations and making sure we don’t lead them toward mass extinction. That’s it… Now, Take ten deep breaths, chill the fuck out, and appreciate that… pawn or not… this young lady is trying to make sure you can still keep doing that! Xo

If you haven't seen Greta's full speech, check it out below:

Halestorm will be returning to the UK later this year for an arena tour with In This Moment and New Years Day.

“We’ve been wanting to put together a tour like this for a long time,” said Lzzy at the time of the tour’s announcement. “We are some of the hardest working women in rock, so the fact that we are all on the same stage every night is something not to be missed! We support and love each other, and we are representing our genre. This line-up is a beautiful display of what it means to be a strong female example for rock fans everywhere.”

Catch Halestorm, In This Moment and New Years Day live at the following:

Read this next: Lzzy Hale: the 10 songs that changed my life