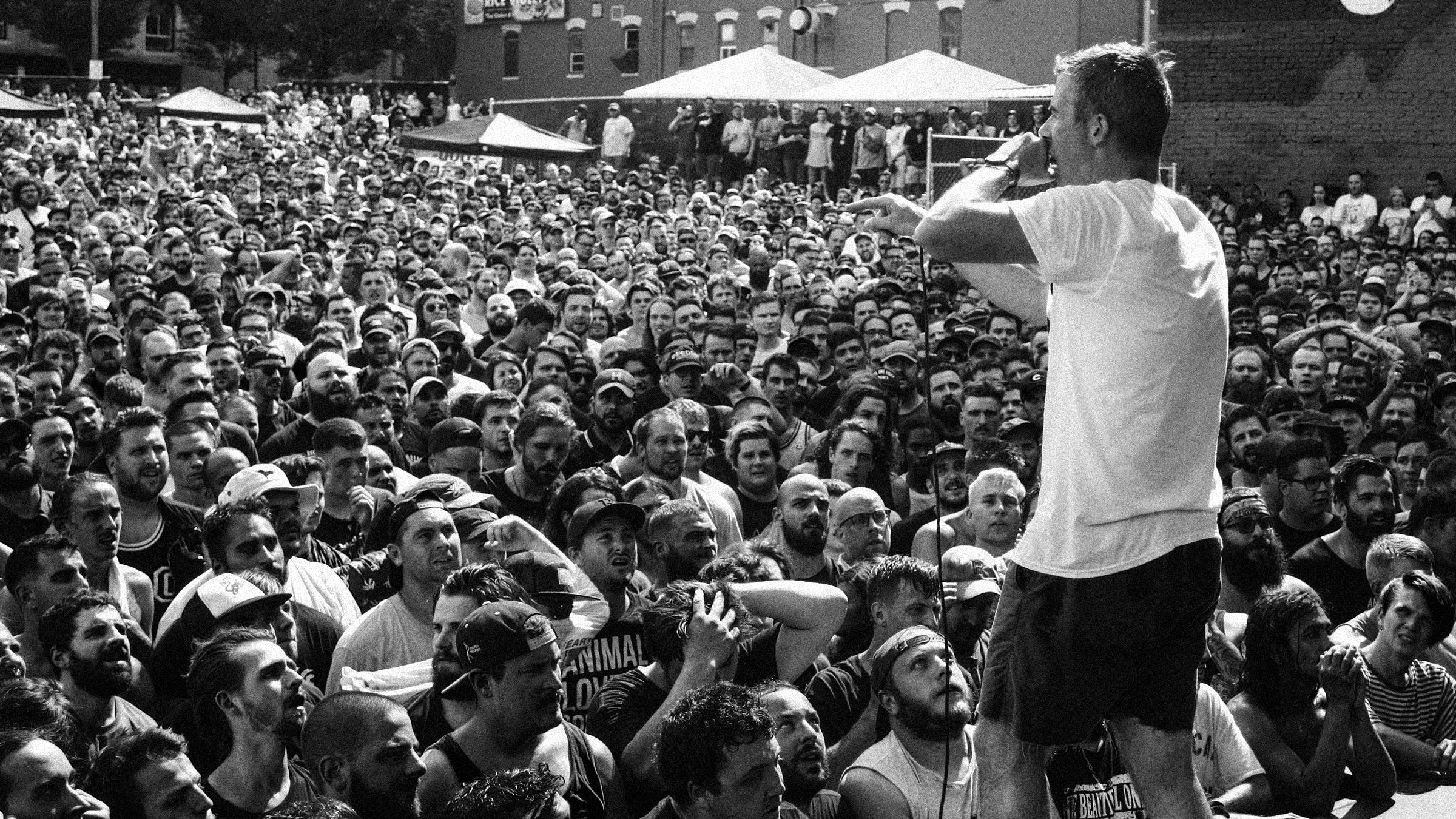 This Saturday morning, nearly 10,000 people from all over the world came out to catch the second night of Have Heart’s two-part hometown reunion in the parking lot of the Palladium in Worcester, Massachusetts. To give you an idea of how massive that is: even well-established hardcore fests attract about a third of this figure -- which might just make this an attendance record for a single hardcore show in the U.S.

Even when doors open an hour earlier than planned due to an impending storm that threatened to ruin the day, the line has already wrapped around the block. As the audience files in, local hardcore upstarts Ammunation take the stage, followed by Triple B labelmates Anxious and One Step Closer, who split a set to each play a couple of songs. Anxious’s growly emo gets some stage dives going, and these continue for One Step Closer’s melodic take on hardcore.

Things really take a turn for the insane with a set from rising hardcore superstars Vein, who capitalize on the venue’s already-electric energy to fry the crowd to a crisp. Perhaps 10 years ago, a band with so many crossover nu-metal influences would have seemed like an impossible fit for what could be the world’s biggest hardcore show ever -- but as they first proved with their fantastic debut album, Errorzone, the Boston-based band is right at home for this show – both figuratively and literally. The band performs with a surgical precision that seems impossible. Whatever their genre or categorization, Vein are clearly poised to make a long-lasting mark on heavy music.

Following Vein’s set, bands that played with Have Heart during their tenure begin to take the stage. Up first: Shipwreck A.D., a metallic hardcore Massachusetts-based band from the mid-‘00s, whose singer, JD Dowling, is featured on The Unbreakable from Have Heart’s debut, The Things We Carry. Shipwreck opens with fan favorite Footsteps, and bring a personal touch to the show, with Dowling speaking about how he met Have Heart vocalist Patrick Flynn in 2003, and built a friendship that would take both of their bands around the world.

Up next are Richmond, Virginia’s straight-edge lifers, Down to Nothing, who have been at it for over 15 years. They play songs from throughout their entire discography and get consistently emphatic reactions. Whether playing classics from their first full-length, 2003’s Save It For the Birds, or their latest, 2013’s Life On the James, DTN clearly remain a force to be reckoned with in today’s hardcore scene.

Finally, it’s time for the main event. The anticipation has been building all day; whether people had seen Have Heart while they were active or missed their chance, everyone in attendance has been waiting at least 10 years to see one of their favorite bands.

As Have Heart take the stage and tear into The Unbreakable, there isn’t a single cloud in sky. “He's the band that's playing while the ship sinks / The song of hope he forever sings / He taught the sun to shine,” shouts Pat, seemingly narrating the incredible event that’s occurring on this perfect day outside.

Though banter is kept to a minimum, Pat Flynn’s words of wisdom in between bands have always been integral to their show, and today is no different. Rather than drowning in nostalgia, Pat speaks boldly against the United States’ current immigration policy of separating migrant children from their parents and incarcerating them. Onstage, a sign reads: “Separating migrant children from their families is a human rights violation.”

Have Heart haven’t come back to celebrate an anniversary or to make a quick buck—they’re here because they have to be. In today’s political climate, we need a reminder that our voices can be a weapon for change. Pat’s lyrics reflect the struggle of being an imperfect human who strives to be better. The change must start within ourselves and our communities in order to effect change more broadly. The band’s hopeful chants are needed more than ever today, to usher in a renewed passion for bettering the world around us. And to many of us, that’s what Have Heart -- and hardcore in general -- have always been about: creating an alternative to a world with which we don’t identify. Because if we don’t take it upon ourselves to better the world, no one else will.

Over the course of the set, Have Heart rip through songs from 2006’s The Things We Carry, 2008’s Songs to Scream at the Sun, and even squeeze in a cover of Minor Threat’s Salad Days. The crowd knows every word, barely letting Pat sing many of his lyrics himself. It’s better that way. The crowd continues to erupt throughout the entire show: dancing, diving, and screaming. Everyone is intent on soaking up every single moment of the set.

Clouds gather towards the end of Have Heart’s set, but—somehow—the crowd’s energy seems to keep the rain at bay. A torrential downpour comes less than half an hour after the end of the show. Despite their time away from the stage, Have Heart prove that they are now at the top of their game, with a message as relevant today as it was a decade ago. Let’s hope that 10 years from now, Have Heart won’t have to come back with such urgency.