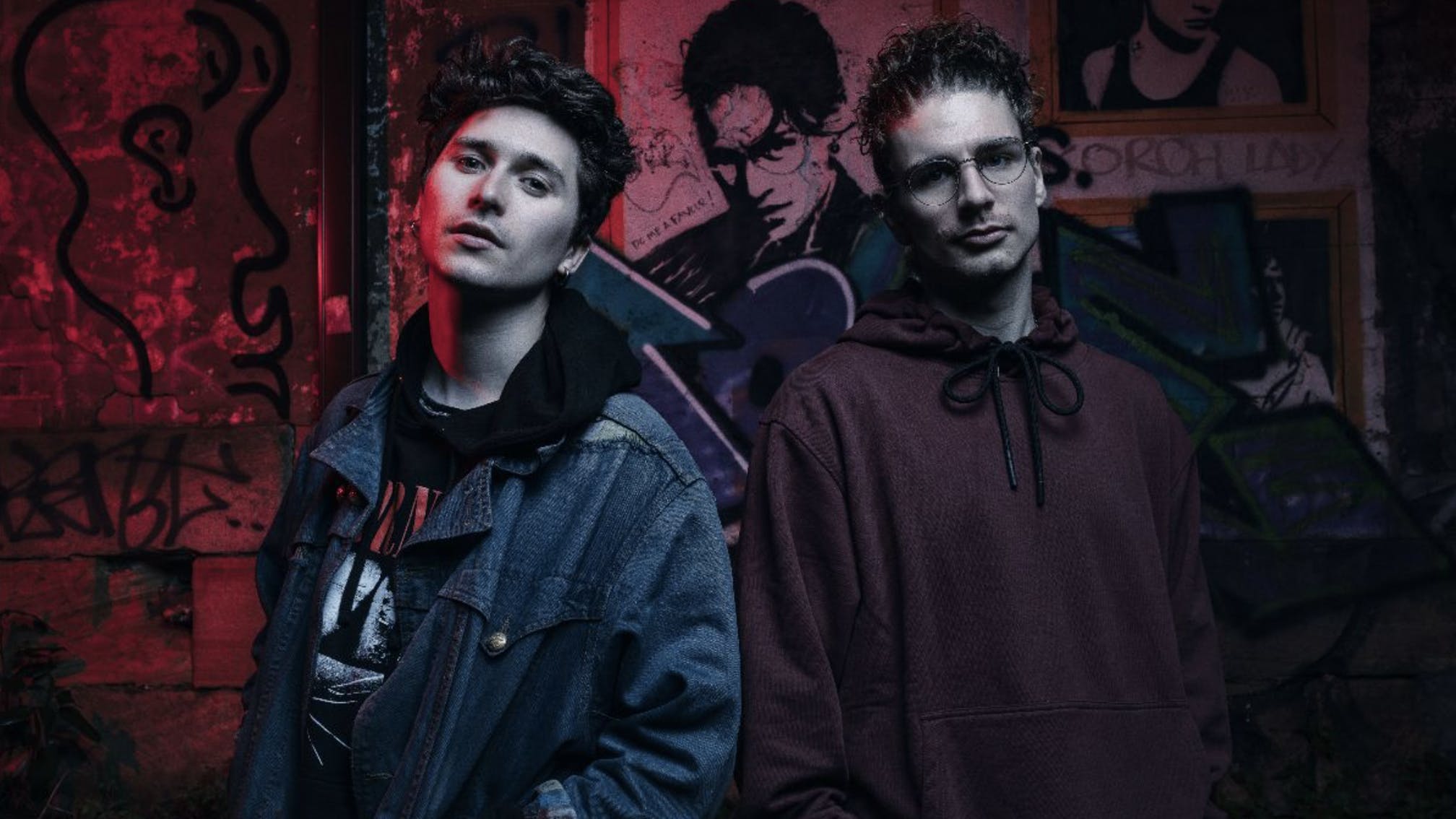 When Holding Absence reached out to Alpha Wolf about the prospect of the bands working on a project together, the response from the Aussie metallers was steadfast.

“We knew the bands were big fans of each other, and it had been great seeing Holding Absence’s album [2021’s The Greatest Mistake Of My Life] do so well,” he remembers. “There was literally no reason not to work together.”

Fast-forward to now, and Holding Absence and Alpha Wolf have just dropped split EP The Lost & The Longing. The split contains two songs from each band, with Lochie and Holding Absence vocalist Lucas Woodland each taking a turn to appear on one of the others’ tracks.

A release that sees two of rock’s most exciting new bands come together to celebrate their love of one another’s music – Lucas says Alpha Wolf have “changed how I view metalcore,” while Lochie speaks of the “imposter syndrome” he experienced when trying to write songs for the EP that would match the quality of his collaborators – The Lost & The Longing is a short, sharp and seriously awesome treat for fans of both bands as we await their next albums.

Kerrang! brought together Lucas and Lochie once more to discuss the EP, as well as a variety of subjects including the benefits of collaboration, the importance of aesthetic, and how they’re finding touring in a post-COVID world…

On the benefits of collaboration

Lochie Keogh (vocals, Alpha Wolf): “The obvious thing is reaching into each other’s audiences, and from our perspective, maybe showing the Holding Absence fans something they haven’t discovered yet and might enjoy. But more than that, it’s a refreshing change of pace, because bands put out albums all the time. Rather than just dropping another heavy metal or rock album, by doing this you get these worlds colliding, and even if you don’t love the music – which would be crazy, but I digress – it’s an interesting concept in and of itself. Having these very different bands come together to curate a release is, I think, a very cool thing.”

Lucas Woodland (vocals, Holding Absence): “A big part of us doing this was us looking at Alpha Wolf and seeing how much they care about their fans and the experience they’re getting from the band. And I feel like we’re the same. My thinking was that, obviously the fans of both bands want to hear new music, but the really cool thing was the thought that we could appeal to people who kind of sit in the middle of Holding Absence and Alpha Wolf and like both bands – I knew that in doing this, they’d be having the best time. I wish my favourite bands were doing this more!”

On switching up release formats

Lucas: “Doing a split EP like this is, for me, the compromise. It’s me and my band being able to artistically do something different, while still conforming to the machine and the way Spotify wants us to have a new song every six months. We’ve done that, put out a YouTube video and done all the things the industry wants us to do, but it still feels like we’ve had a genuine artistic, expressive experience, even though it’s not as big and expansive as an album. This is both of our bands putting out new material, but showing people how we want to make the effort to do something interesting.”

Lochie: “Totally. It’s often the case that you might have a song you love and want to drop immediately, but then the labels and Spotify are like, ‘That will not work.’ It hinders your creative bubble, because we just want to create art, but then we have to fill out all these data sheets and papers to get it out there – it crushes it a bit, you know? So to do something like this feels like a nice middle-ground compromise, as Lucas said. This was much more fun for me than recording an album, because with those I often get grim about it with the rush to get it done and everything. But this was very chill. [Our label] SharpTone was amazing as soon as we pitched it – they said yes straightaway and told us to take our time, which was really cool. This was Alpha Wolf’s first time doing something like this – I know Holding Absence have done splits and more standalone singles before – and now we just want to see what else we can do with it, because it’s working so well.”

On the importance of aesthetic and videos

Lochie: “It’s massive, absolutely massive. Even before songs are done, Sabian [Lynch, vocals/guitar] is in touch with our video guy talking about what we can cook up and how we can make it as big and crazy as possible. Before I joined the band, I hadn’t even seen that many of my favourite bands’ music videos, because my thought was that I just needed the music, but I’ve since starkly changed my opinion on that. I’ve seen what they can do – they’re the easiest, biggest form of advertisement for your music. Plus, they’re super fun to do.”

Lucas: “For me, a song without a video is like a movie without a soundtrack. It can exist, but there’s so much more to be understood when more senses are at play.”

Lochie: “It’s great seeing more videos moving away from band performances as well. What Holding Absence do with their videos, for instance, is so much more than just some dudes playing their instruments in a garage.”

Lucas: “Yeah, there’s an art to that in and of itself. The next Alpha Wolf video for this EP is a great example of that – it’s the best video!”

Lochie: “We’ve never done anything like that before – we took a page straight out of your guys’ book! We just wanted to see how enormous we could make it.”

Lucas: “There’s no going back for you guys now! After this, I can’t imagine an Alpha Wolf album without some insane video to go with it.”

Lochie: “Yeah, that’s definitely the direction we want to go in. We want to keep doing things that are cinematic and pretty, rather than just doing something with a bit of animation or whatever. I don’t want to stop now.”

On the UK and Australian scenes

Lucas: “There’s a huge similarity between Australia and the UK in regards to the music scene, because we’re both islands that created scenes almost by pure force and raw power, albeit Australia is a lot more remote than the UK.”

Lochie: “For me, it felt like there was nothing else to do expect be good at music!”

Lucas: “Exactly. I’ve been a massive fan of the Australian scene for a long time, and I don’t think anywhere is doing better right now – 10 of the best bands in our scene are Australian, and it’s so cool to see. It was great for us to go over there recently too, and get to play to those fans and see where all these great bands came from.”

Lochie: “Yeah, we’re in the U.S. right now and everybody keeps telling us how bands from Australia are so good at the minute – they’re all asking what’s in the water! It’s funny, because growing up I always thought UK bands were tougher than Australian bands, but there was definitely a similarity there too – I think we’re far more akin to each other than either of us are with bands from Europe, for instance. Whether that’s because of the Queen, the Commonwealth, being an island… I don’t know! It’s hard to describe. But for all the hype around Australian bands, the UK has some of the best: Holding Absence, Loathe, Architects… sometimes, I think people don’t even realise these bands are British!”

Lucas: “This is a great topic to be discussing right now, because both of our bands have begun properly touring internationally for the first time, and in general we’re both touring harder than we ever have before. When you look at how many shows Alpha Wolf are playing this year, it’s insane, and I respect it so much – I’m so happy you guys are hitting it as hard as you are after the last two years. We’re about to do a tour with Silverstein in the U.S., and that will put us on nearly 100 shows, which is crazy.”

Lochie: “We just got a third of the way through our big schedule a couple of days ago, and you’re right, it’s insane how many shows there are. We’ve never been away from home for this long, but that was the whole intention – we were sitting on our hands during COVID, just booking tour after tour, and now we finally get to go at it. And the crowds have been crazy – this is our second time in the U.S. in sixth months, and people are going in even harder this time! People have been waiting for this for too long – it’s going to be a long time before people take shows for granted again.”

On the prospect of performing The Lost & The Longing Together

Lochie: “Obviously, when you put out a record like this, one of the main goals is to do it together live. Both bands’ touring schedules are pretty hectic and there’s not loads of crossover, so whether it just happens or we have to tee something up, we’ll see. But it’s something we want to do.”

Lucas: “The longer it takes, the cooler it’ll be – I don’t mind waiting!”

The Lost & The Longing is out now via SharpTone

Holding Absence: “As a kid, music is what helped me, and I’d love to be that person for more people”

Holding Absence have been on an upward trajectory to rival Santa’s sleigh, and it shows no sign of stopping – even with a pesky pandemic getting in the way. As they prepare to (finally) take their latest album The Greatest Mistake Of My Life into the nooks and crannies of the UK, Lucas Woodland reflects on their incredible journey so far…

Joined by Void Of Vision, Holding Absence will play in “grassroots venues far and wide across the UK” early next year for their Live & In Monochrome tour.