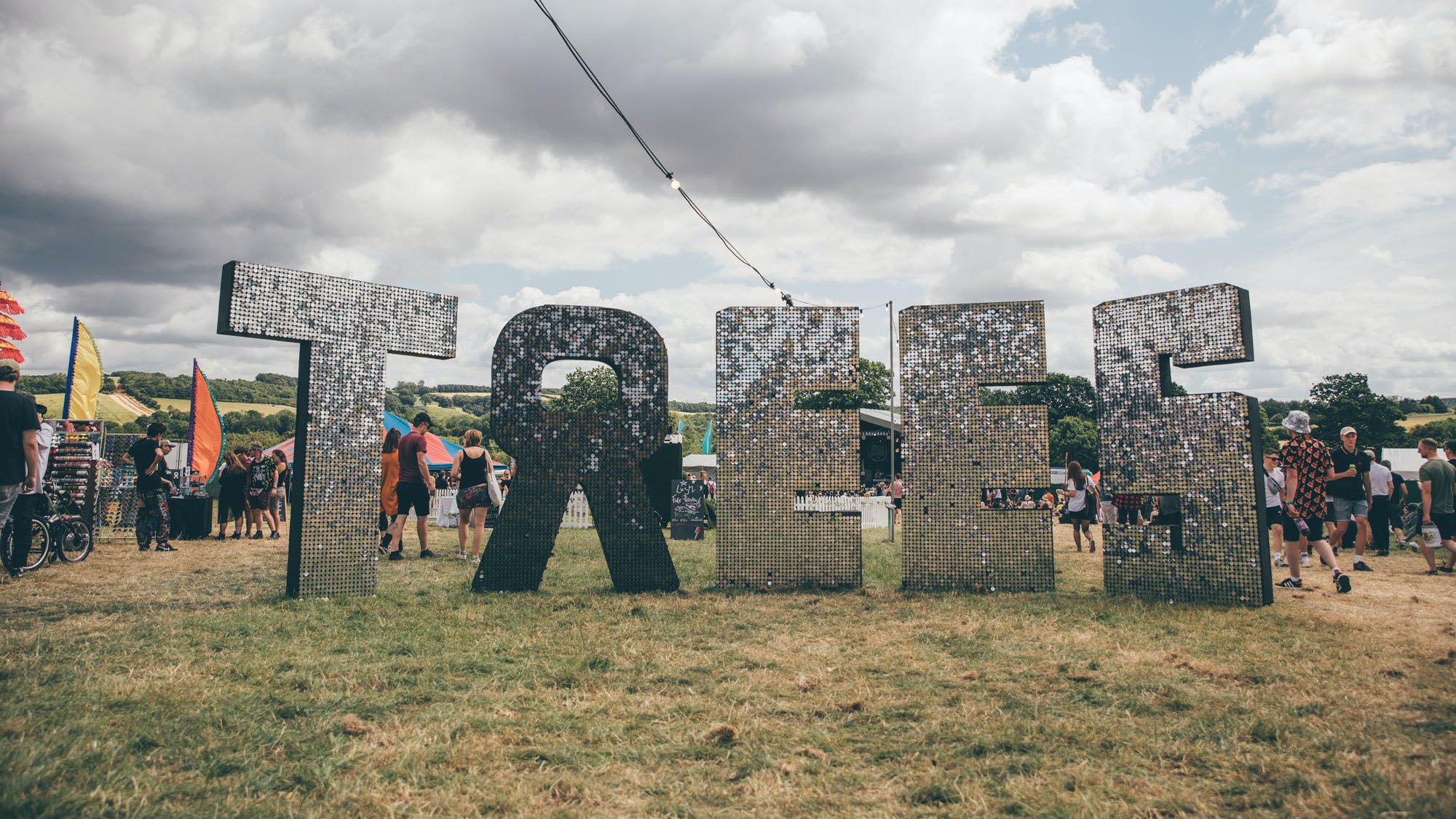 Most of the time, when you’re woken up in a festival campsite by some so-called ‘singer-songwriter’ with an acoustic guitar, it’s just some hopeless sap desperate to get laid. At Cheltenham’s 2000trees, it’s every bit as likely to be main stage headliner Frank Turner cropping back up for another sing-song with his mates.

For Frank, 13 years since he played the inaugural edition, Trees remains a thriving community far more than a commercial enterprise. It’s one in which everyone – from organisers to vendors to the lowliest punter passed out at the back of the field – truly has their part to play. A world away from the corporate mega-sprawls of so many of the UK’s other summer gatherings, it’s difficult to truly communicate the magic that comes to life in the Cotswold hills every second weekend in July for those who’ve never been.

“Even though it grows from year to year,” grins Jamie Lenman – another festival regular – with a hint of trademark mischief, “it still feels small, in a good way, like a big village fête.” Alongside Turner, the ex-Reuben frontman is sufficiently stalwart for a performance space in the campsite in his name. Having taken over Thursday’s Axiom stage for a massive ‘Lenmania II’ celebration, he’s commanded the awe of Trees' bigger recent crowds, too, but still understands the importance of that feeling of intimacy. “There’s a genuine sense of community here. The organisers listen carefully to their attendees about the kind of thing they want to experience, from bands to amenities and beyond. It’s the friendliest place I’ve ever been, and I’ve been to Canada, for Christ’s sake!”

Taking over the rolling hills and lush woodland of Upcote Farm, Trees can look – and often feels – like a parody-perfect prototype of the British boutique musical experience. Like a miniaturised Glastonbury (with less mud and a greater density of interesting acts), there is no meaningful separation between the camp and performance areas, which spread off on two sides into the farm’s lower pastures and the trees themselves.

Away from live music, there’s a strong programme of debates, poetry, comedy, yoga, and punk-rock ukulele workshops. There’s ample alternative provision for tiny rock-tots in their ear-defenders, and haggard silent-disco revenants in their hangovers. Extinction Rebellion have a meaningful presence onsite, staging performances throughout the weekend. There is prominent representation for Safe Gigs For Women. The focus on eco-friendliness is on another level, with abundant facilities for recycling impeccably utilised and scarcely a few scraps of litter floating around the site even on its fourth day. There’s even a perfectly-calibrated crazy golf course with an especially fine squatting-devil pot hole.

“Our aim with 2000trees was to do something quite different to other rock festivals in the UK,” explains lead booker James Scarlett. “These festivals may have good line-ups, but they don’t have that boutique feel that you often get at festivals outside of the rock world. I think the special Trees vibe is created by a combination of the beautiful site, amazing food traders, friendly staff and – more than anything – the enthusiasm of our audience and their love for the music. And anyone that has seen our Forest Sessions stage will tell you that it is a unique and wonderful place to watch music. I sometimes wonder if there is something in the water at Upcote Farm because it seems that once people have been once they come again and again!”

“People might imagine differently, but the bigger the festival, the greater the ratio of dickheads to actual music fans that you tend to get,” The St. Pierre Snake Invasion’s Damien Sayell explains later, over a drink. “At bigger shows like Reading and Leeds it always seems that you hear about the scuffles and security getting a bit heavy-handed. When we come here, it genuinely does just feel like we’re catching up with old friends. That’s not to say there are no dickheads at Trees – you get them everywhere people come to get drunk and have fun – but it truly is predominantly music lovers. Trees seems to excel at booking bands that don’t have dickhead fans – except us, of course!

“There are lots of different experiences to be had here, too. You can just wander round and find new things. You can see bands out amongst the trees in The Forest stage – which I’d go as far as calling the most beautiful stage in the country. Not that I’ve been to every festival, but it is just really lovely here.”

Mind you, an idyllic atmosphere would all be for nothing without the music itself. For many, the festival is characterised by bands who’ve followed in the footsteps of Messrs Turner and Lenman through the intersection between alt. rock and folk. Leicester’s Grace Petrie, for instance, delivers the sort of steely defiance that only a left-wing lesbian activist protest-singer battling technical issues ever could. London shanty-punks Skinny Lister manage to generate a level of chaos for salty classics like John Kanaka that’s the equal of anything over at Turnstile. Jim Lockey & The Solemn Sun roll back the years to revisit the folky roots from which their current alt. racket emerged.

With Turner taking the stage for a third set of the weekend with his hardcore outfit Mongol Horde too, there’s no lack of heaviosity. Acts like Rolo Tomassi, Pengshui, Groundculture and St. Pierre rep the UK underground. And though the festival shied away from non-UK acts before Alkaline Trio’s 2015 headline, there’s now a smorgasbord of the finest of world's hardcore on offer – from the aforementioned Turnstile (stopping-off for the second year in a row), through Drug Church, Angel Du$t, Cancer Bats and the awesome Frank Iero & The Future Violents. They even flew in Buffalo legends Every Time I Die this year for a full play-through of 2003 classic Hot Damn, somehow bettering the organisers’ previous dream-bookings of At The Drive-In and Refused.

Of course, that’s not to say Trees is in any danger of forgetting its own roots. Such eye-catching additions are resolutely at the service of the broader bill, with a clear eye to introducing the punters drawn in to closer-to-home acts they mightn’t otherwise come across. Derry’s The Wood Burning Savages set fire to the main stage with their politicised punk. Aberdeen’s Cold Years find a wave of fresh fans in the aptly-named Neu tent. Brighton’s Yonaka, Glasgow’s Vukovi and especially South Wales’ Dream State play to some of their biggest-ever crowds. And that’s not to forget Surrey’s You Me At Six and Norfolk rockers Deaf Havana getting to add further mainstage-headline experience to their increasingly bulging CVs. When festival season’s far-more-faceless giants come knocking, it’s worth remembering they pulled it off here first.

“More than any other festivals,” Damien continues, “2000 Trees (and August’s math-rock extravaganza ArcTanGent [run by much of the same team]) feel like the places you can play without a massive following or the support of a label. If you’re good, you can get on. The organisers really are at the forefront – more than any other festival in the country – at putting forward new talent who wouldn’t otherwise get the spotlight. It all comes back to that sense of community.”

“Ultimately, there’s nothing more important our the line-up,” James nods. “I really think that 2000trees plays a vital role in giving bands their first chance to play at a major UK festival. The likes of Twin Atlantic, Black Peaks, Nothing But Thieves and Creeper all played sets at Trees well before they were well known. And I fully expect the 2019 crop to go onto equally big things – people should keep an eye on Sœur, False Advertising, Brutus and St. Pierre, for sure. All of them are awesome!”

“I think what Trees does is celebrate and prove the demand for greater variety within the alternative music scene,” Jamie concludes, with a sense of real pride in the event he’s played his own little part in building. “I can’t think of any other festival, except perhaps Glastonbury, which has a wider range of music on offer, from folk to dance to extreme metal – sometimes all in the same set! They have their finger on the pulse about what’s new and exciting on the UK scene and they book bands on individual merit instead of hype or publicity, so for every band you already recognise there are ten more waiting to be discovered...”

For those still sleeping on what might just be the UK’s finest festival experience, you’d be barking not to head down to the woods this time next year...