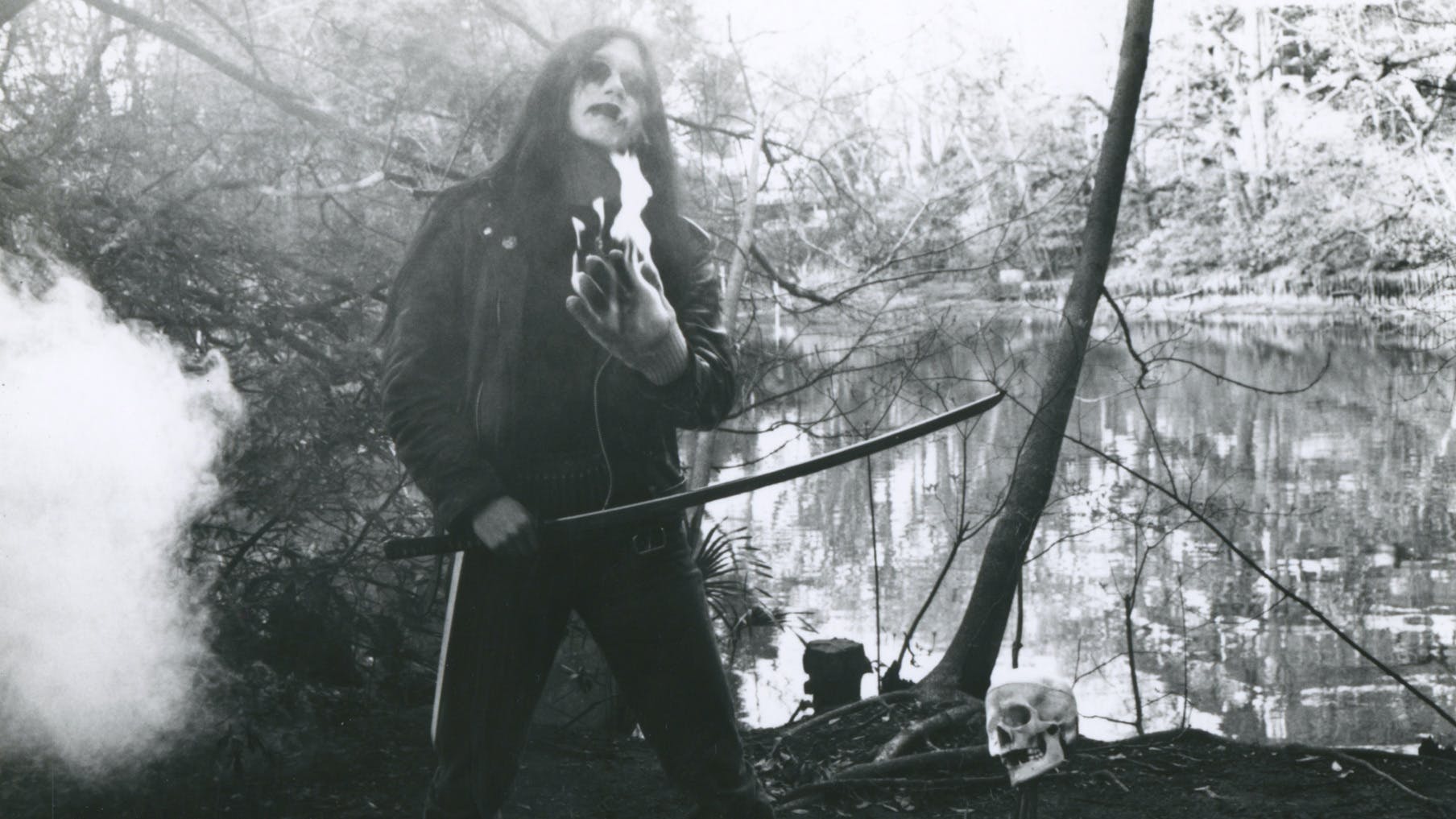 On the morning of June 6, 1992, Fantoft Stave Church in the countryside just outside Bergen, Norway, was burnt to the ground, a fire lit by Varg Vikernes of Burzum – Count Grishnackh as he was then aliased. It kicked off an association with Norwegian black metal that would go down in infamy. More people should do this, they reckoned.

One such candidate was a young Japanese metalhead from Tokyo named Mirai Kawashima, who in communications the Count enthusiastically encouraged to follow his example. There was just one problem.

“He was boasting that he'd burned down some churches and told me to do the same in Japan,” Mirai recalls today. “I remember answering him that here in Japan almost nobody believed in Jesus Christ and we seldom come across churches.”

But what Mirai couldn’t contribute to black metal through Satanic terrorism, he has delivered artistically over the past 30 years with his band, Sigh. Conjuring up the wild-eyed madness of early Venom and adding splashes of classical piano from Mirai’s own maestro hands, their Scorn Defeat debut from 1993 – originally released on Mayhem guitarist Euronymous’ Deathlike Silence label and reissued this week by British underground powerhouse Peaceville – introduced Mirai to the underground as leader of a band who were genuinely ‘other’. To many, even by black metal standards, they were really sinister, with even their corpsepaint making them seem weirder and more unsettling than that of their European counterparts. That the album came out after Euronymous’ death, an opportunity for some sellers to label it as being released ‘from beyond the grave’, only added to Sigh’s macabre mystique, and made them a cult concern.

Today, the band stand as one of the most wildly creative outfits ever to be dubbed black metal, thanks to a tirelessly-good run of albums that take in black metal racket (Hail Horror Hail), magic mushroom-guzzling psychedelia (Imaginary Sonicscape) and sax-wielding jazz-metal mayhem (Gallows Gallery). But before Scorn Defeat, with no precedent for any kind of breakout from the tiny scene, that wasn’t just not on the cards, it wasn’t even something that occurred to anyone.

“We never thought we'd be able to release an album or anything,” says Mirai, looking back, “simply because there were no Japanese extreme metal bands that had an album out internationally.”

While in Scandinavia the black metal scene was small but existent and gaining traction, in Japan there was next to nothing, and what was there had very narrow possibilities. Mainstream heavy metal and rock were huge, and even being interested in the occult wasn’t unusual for people of his age. But darker, more evil music found it harder to take root. Standing alongside Sigh were bands Sabbat and Abigail, who dubbed themselves ‘The most evil band in Japan’, but the scene was more or less the band members and a couple of other heads entrenched in a true underground.

“Extreme metal has never been big in Japan,” he recalls. “Right before I started Sigh, I met a guy named Jun Kokubo, who is a legendary person in the Japanese underground scene. He was publishing a fanzine named Deathrash Mayhem and had a band, Messiah Death. He showed me the much more underground world like fanzines and tape trading. That's how I got into the real underground.

“Nobody cared about early thrash metal like Venom or Bathory – literally nobody!” he continues. “But it was great for me because I was able to buy lots of LPs for $1 at record stores in Tokyo. I remember buying many rare Brazilian thrash records from [Brazilian underground label] Cogumelo Records for almost free back then.”

Knowing this, it’s small surprise when Mirai admits that his budding outfit “weren't ambitious at all, and we kind of hated to be ‘professional’”. Early gigs were ad-hoc affairs, where their then-three-piece line-up made recreating recorded songs live impossible. Instead, what audience there was would be treated to a set of Venom covers. “Some people got totally pissed saying, ‘We came here to hear Sigh songs, not Venom’s!’” laughs Mirai. “We were like, ‘What's wrong with that? We'd like to hear Venom songs more than ours!’”

This attitude and vision would change somewhat after Mirai sent a copy of the band’s Requiem For Fools 7” to Deathlike Silence. The reply was not what he expected, and not just because the Norwegian liked Sigh’s music.

“Originally I sent it to [late Mayhem singer] Dead, but somehow I got a reply from Euronymous instead. The letter said that Dead shot himself and Euronymous found his body, and then the first thing he did was to go out to get a disposable camera to shoot the scene,” remembers Mirai. “I wasn't sure how serious he was, but you know the picture was used for [Mayhem live album] Dawn Of The Black Hearts a few years later. Euronymous told me that he liked our stuff and wanted to sign us. I immediately said yes because there was no other label interested in us.”

This would not be the only time the activities in Norway would raise questioning eyebrows. Varg’s boasts of church burning were also treated with a degree of doubt at first, because… well, that sort of thing just didn’t happen. And not just because there were no churches to burn.

“One of the biggest mysteries to me was Varg was boasting around about his crime and was still on the loose. That cannot easily happen, at least in Japan,” he recalls. “Of course, I had seen the Aske flyer [which accompanied the Burzum EP, featuring a shot of a burnt-out Fantoft] but I have a recollection that I asked Yasuyuki from Abigail if he thought the picture of the burned church was for real.”

On another occasion, it was a conversation with Euronymous that made Mirai wonder about the truth of what was going on.

“Once when I was talking with Euronymous on the phone, he told me not to talk about those crimes because INTERPOL could be tapping our conversation,” he says. “INTERPOL is hearing what we're talking about? That was hard to believe again, but looking back now, of course it could be true. The stories I heard from them sounded very surrealistic to me. I was still young and honestly I thought those stories were exciting, but probably that's because I was far away from them. I am not sure how I would have felt if I had been in Norway.”

Doubt or not, however, Mirai says that Sigh would have “ended up as a demo band and probably disbanded in the early ’90s, which means my life would have been something completely different”. The Mayhem leader gave the band his patronage, and planned to release their debut full-length on Deathlike Silence. This did happen, but in December 1993, four months after he was stabbed to death by Varg Vikernes in his Oslo apartment building.

“I am answering this question on August 7, 2020; I talked with Euronymous on the phone for the last time 27 years ago today,” reveals Mirai. “He sounded a bit down and was saying he might have to go to jail and the release of Scorn Defeat could get delayed. He got murdered three days after that.”

Even in the face of this tragedy, Scorn Defeat was still released. By no means was it an overnight sensation, remaining very much underground, and future albums would find Sigh improving and becoming even more creatively brilliant, but the very fact that they had broken through the limitations of their own scene changed the perception of what it was possible for a black metal band from Japan to do. For Mirai, it was a life-changer.

“When we recorded Scorn Defeat, I never ever thought that our music would still be appreciated by some people after 30 years,” he says. “Or probably, I never ever thought about how long it'd survive. I was just 20 or something, and didn't have an imagination to picture the future of as long as 30 years later.

“I never thought I'd be in an extreme metal band when I was 30. You know, back then, even Venom and Slayer members were in the 20s, and it wasn't easy to picture myself playing extreme metal at the age of 30.”

And then comes a statement from Mirai that throws the importance of what happened over a few months in 1993 into focus.

“We never thought about the future at all,” he muses. “Well, now I am 50 and still doing Sigh.”