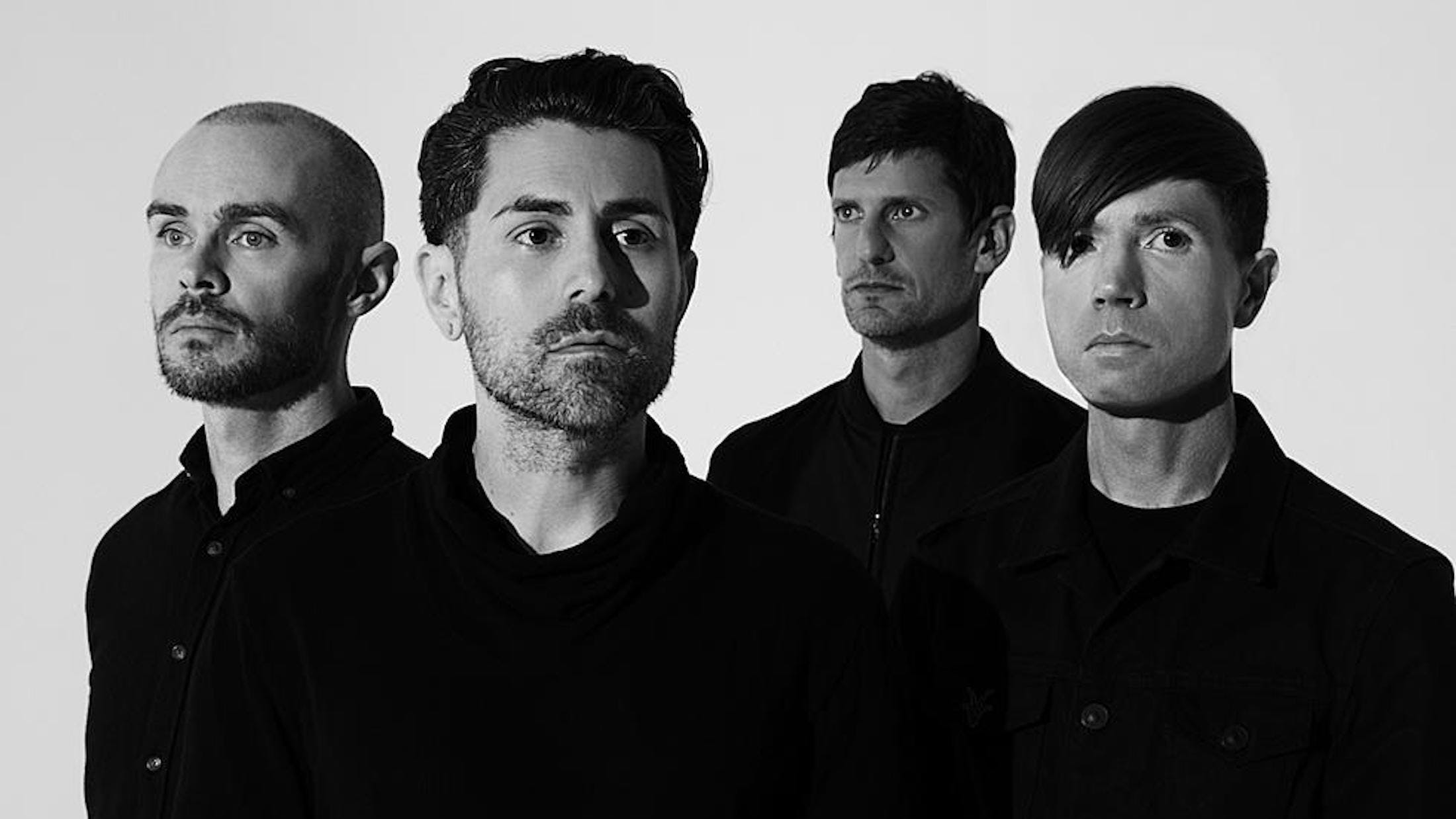 Thank Satan’s hand soap for 2000trees festival. While the uncertainty and sadly necessary tour cancellations in the wake of the coronavirus pandemic are making us want to run to the hills on a daily basis, 2000trees have announced new headliners that will have you looking forward to summer again. California goth rock royalty AFI will top the bill on Friday, while Thrice will play their landmark fourth album Vheissu in its entirety the following day.

They’re not the only ones making their debut appearance at Upcote Farm between July 9-11. Alongside tons of other ace bands to break the natural serenity of the surrounding Cotswolds Hills this year will be Crossfaith, Anti-Flag, Leeched, Royal Republic, Against The Current, Gnarlah, Beachtape, Saint Agnes, Fresh, Chubby & The Gang, Kneecap and Aussie scamps The Chats. Elsewhere, ’trees favourites Black Peaks, Lonely The Brave and Orchards will be making their welcome return to a stacked bill. Plus there’s the acoustic Forest Sessions, yoga, crazy golf, silent disco…

You get the picture, it’s going to be a barnstormer. So we’ll let AFI’s Jade Puget and Thrice’s Dustin Kensrue explain why there’s even more to look forward to…

Both AFI and Thrice will be making their first appearances at 2000trees this year. Have you heard much about it before?
Jade Puget, AFI (guitar): “Yeah, actually! I’ve heard a little bit about it from people, and then of course when we got the offer to play I did a little research and it looks cool and super-interesting. I love that it’s out in the middle of nowhere, and the line-up looks great, so we’re definitely looking forward to it. And the weather’s usually nice? That’s great, because playing festivals in the UK usually reminds me of playing in the mud, so playing in the sun will be really nice – especially since we’re from California so it’s what we’re used to.”
Dustin Kensrue, Thrice (vocals/guitar): “It sounds fun and there seems to be a lot of cool bands who play. We toured with [2016 headliners] Refused last year and they were a lot of fun every night and really sweet dudes. I’m not sure we’ll top them, but we’ll try!”

READ THIS: The 11 best hidden tracks in rock history

It’s still early days, but do you have any thoughts on the setlist AFI will deliver?
Jade: “When we do setlists on tour we usually do them on the day of the show, but I’ve got some ideas. It depends on what people want to hear. We don’t really pander to a crowd, but we want to put on a show that people enjoy and some people will want the old stuff, some people not, so we try to do a good mix. We’ve been around a long time and have 11 records now, so it’s hard to make one single setlist that is a good representation of the band’s history.”

Do you tend to go with what feels right on the night, then?
Jade: “Yeah, and also whatever everyone feels like playing, too. I usually write the setlists, so it’s really in my hands on the night and then I’ll run it past the other guys for approval. Sometimes we’ll throw something different in there, like if Davey [Havok, vocals] is feeling like playing Totalimmortal, for instance. We don’t always play that song, but when we do our fans really love it, so it’s a big thing when we do.”

As for Thrice, you’ll be playing Vheissu from start to finish. How have you found playing through that album on your recent tour, Dustin?
Dustin: “It was really fun. I think I had more fun playing these shows than I have had in a long time, for a couple of reasons. I think that record’s really good, but I don’t love my singing on it, so getting to do it live I kind of get to improve on it. I also think those songs hold up really well, and we play them better now than we would have done at the time. And playing the album in order means the whole set moves differently than I would normally structure a set. We would usually close with The Earth Will Shake, but now we’re playing it third song in the set because that’s where it is on the record, so that’s a real dynamic shift for us like, ‘Woah, why are we playing this so early?’ It has its own flow and everyone kind of has this shared understanding of what song is coming next, so it feels very different to a normal show and I really like it.”

What was it that made you decide to revisit Vheissu?
Dustin: “Well, we’ve never been a huge fan of those revisiting record tours, just because it felt like there was an influx of bands getting back together to cash in, and we didn’t want it to ever feel like that’s what we’re about. We were just diving back into making our own records [after reforming in 2015]. But then it came about that this year marks 15 years and for us, Vheissu was a really important milestone in our progression and for our fans, I think. There are songs we’re only now playing for the first time, like Between The End And Where We Lie, so it seemed to make sense that if we were going to celebrate a landmark anniversary like that, then this was the right way to do it. I think we’re going to play the album, then some B-sides from the record and a couple of favourites after that. I’m really excited to give people a chance to hear it.”

READ THIS: 13 bands everyone loves who never achieved superstardom

Jade, this year also marks 20 years of AFI’s The Art Of Drowning. Will you mark that in any way at the festival?
Jade: “I don’t know. That was an important record for the band and me personally, so I would like to do something special but I don’t know what that would be. I know especially Davey isn’t interested in doing a retrospective setlist. He’s not one to do too much looking back, but we do play songs off that record at almost every show, so I could definitely see us having a few more tracks from it in our set.”

Looking forward, is it possible we might hear some new AFI songs at 2000trees?
Jade: “I hope so! We’ve been working on a new record. Davey and I sat down for a long time putting together the song list for it, and it’s really exciting. I don’t know if it will be out by then, but I think hopefully at least a couple of songs will be. I’m excited for people to hear it and see what the reaction is. It’s an eclectic record, and I’d much rather put something out there that’s a little bit left-of-centre rather than try to do something that’s expected.”

Have Thrice been working on any new stuff since 2018’s Palms, Dustin?
Dustin: “I don’t think we’ll play something new at the festival. It’s probably too early in the practice, but we are starting to work on the next record. I think it will probably be out next year, but it’s a very rough plan at this point. We’ve got a couple of other shows planned, but mostly this year we’ll be writing and recording.”

Is it encouraging to see independent festivals like 2000trees thriving in the current climate?
Jade: “I love it! I was reading that 2000trees was started by a group of friends who said, ‘We want to start a festival,’ and I think that’s amazing. I wish that would happen all over the world, because there’s less corporate interest and when it’s being run by people that clearly love music good things can happen. Even if it’s not the biggest festival in the world, those festivals are important and they’re putting bands on the bill that may not yet be able to play those huge events and that’s incredibly important to foster.”
Dustin: “Any time you can get a fresh take on the live music experience and not have it filtered through something that’s been going for too long is cool. Don’t get me wrong, I love the big ones too that have been going forever. But I think this sounds really exciting, especially being out in the trees and the mud and all that.”

2000trees are taking steps to mitigate the carbon footprint of people travelling to the festival. Do you think it’s a positive development that some festivals are acting with more consideration towards their environmental impact?
Dustin: “Yeah, definitely. I was reading a bit about that the other day, where larger bands like Radiohead changed the way they toured by playing places that cut down the distance people had to travel and it made a decent amount of difference. For a band our size it doesn’t seem to make such a huge difference if we change our methods, as far as I’ve been able to tell. But I think it’s rad that people are trying to find ways to make it work, especially because I think live music is so important and unique in this digital age. I think there’s something really special and beautiful about sharing music in those kind of environments, so if we can do that and have it be sustainable, all the better.”
Jade: “I think we should all be concerned about our environmental impact. Any festival, any corporation, any country or any person seeing what they can do to ameliorate what we’re doing to this planet is always a step in the right direction. I mean, we’re aware that when you’re in a touring band it’s hard not to sound like a hypocrite when you’re saying, ‘Save the planet.’ We’re flying over to you and that’s not helping anything, but we do what we can and if there was a better way to get overseas then we would definitely explore that.”

The festival is held in a beautiful area, but would you consider yourselves outdoorsmen at all?
Dustin: “I don’t know if I would give myself that title (laughs), but I definitely love being out in nature and going hiking. One of my favourite things I did two years ago was going backpacking in Yosemite National Park for a couple of days. That was really fun, carrying all your stuff, getting away from any campground and getting properly immersed in the backwoods. It was a blast and I really wish I did that stuff more.”
Jade: “I grew up in the woods! My family grew up very poor in Northern California, so we lived out in the woods and I was tromping around barefoot as a little kid. Like I said, we were poor so we grew and hunted everything we ate and it was quite an old-school lifestyle, but it was great. I love the forest and the outdoors. That stuff’s in my DNA, so I should feel right at home.”

2000trees takes place at Upcote Farm, Cheltenham, on July 9-11. Get your tickets here.