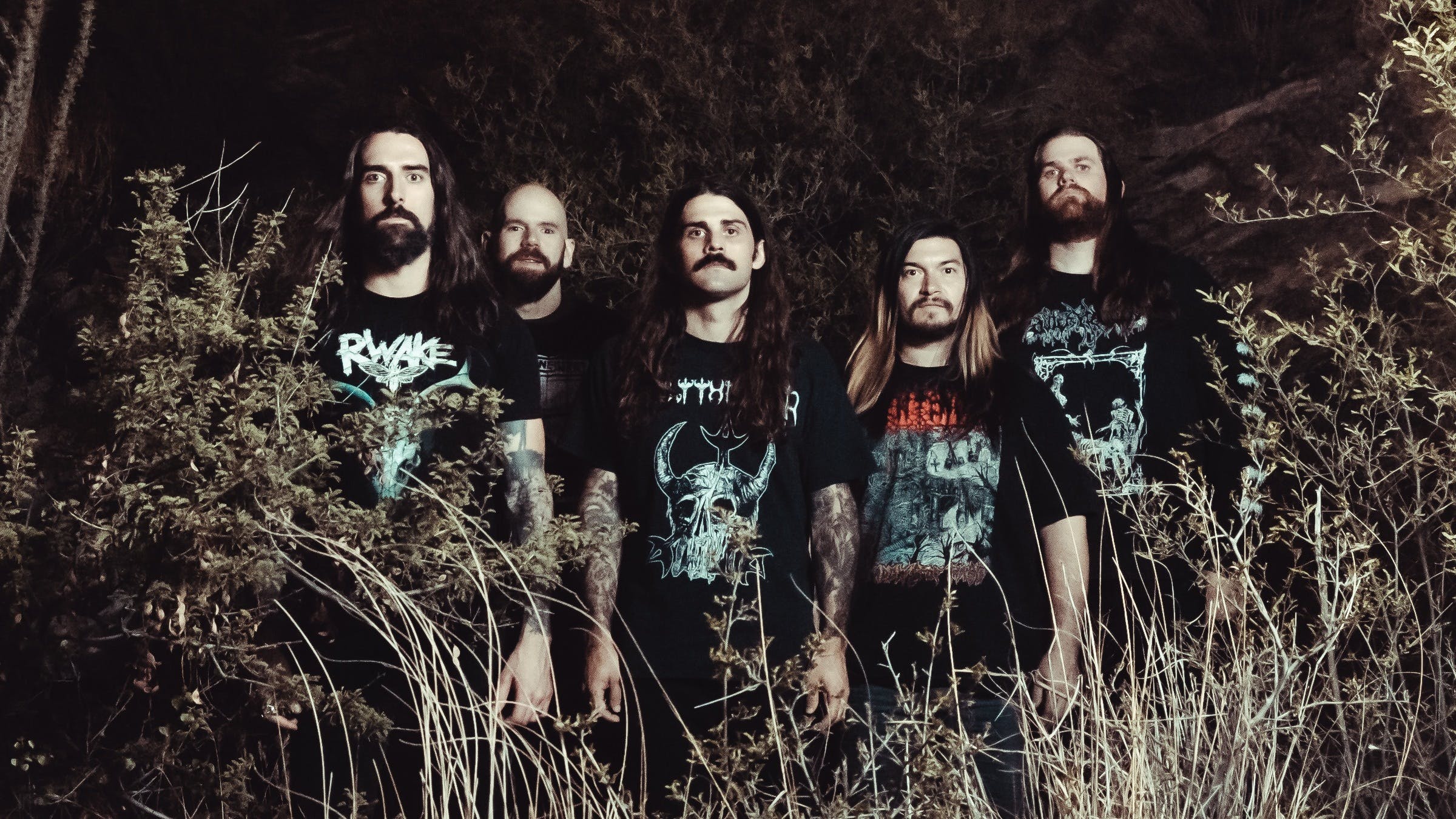 “We’re at the point now where our lives are pretty much determined six months in advance,” says Gatecreeper guitarist Nate Garrett. “Sometimes I feel a little trapped. I feel a little trapped right now because I’m not on tour, I’m not writing, I’m not recording, but I can’t really do anything, because we have shit coming up. It’s an intense way to live, for sure.”

Given the kind of music Gatecreeper make, the elaborate planning that goes into their careers might sound strange to some. The Tucson, Arizona, quintet play the sort of rancorous, fuzz-drenched death metal that most would consider too gruesome for even the average metal fan, much less widespread audiences. And yet, in the the last five years, Gatecreeper have refined their sound into something both hostile and deeply listenable, earning them countless accolades and making them one of the most important American metal bands of the last decade.

Now, with their second full-length record, Deserted, ready for release, this underground band find themselves thrust into the musical limelight, poised to take over the world with music that sounds like a rupturing wound.

“Chase [Mason, vocals] has mentioned ‘stadium death metal,’” says Eric Wagner, Gatecreeper’s other guitarist. “It’s like, you can sing along to it, it’s memorable, it’s not 50 riffs in this linear structure. It’s four or five really good riffs that are really catchy and flow well together."

Since the release of their first self-titled EP in 2014, Gatecreeper’s ascent to underground notoriety has been impressive to watch. Though the record only featured four songs, its contagious riffage and old-school sensibilities immediately vaulted the band above the Arizona scene and into the eyes of hip music fans looking for metal that was both listenable and simultaneously killer.

“When we wrote, recorded, and released the first EP, it was in the releases of Pitchfork in the first week,” says Eric. “My roommate was in a band and he’d been trying to get in there for years. It took us all by surprise, because people all picked it up really quickly and ran with it.”

After releasing splits with bands like fellow Arizonans Take Over And Destroy and playing some shows, the band got to work on their first full-length record. By the time the album was laid down, the hype behind Gatecreeper was strong enough that, though they had indie label A389 in mind, a bigger deal was inevitable.

READ THIS: States Of Metal - Arizona is savage, sweltering, and sick as hell

“Dom [Romeo] who runs A389 -- he plays in Integrity now -- a lot of his bands have gone on to Relapse," says Chase Mason. "When the record was done, he was like, ‘This is really good, I’m kind of winding down the label. I could put it out, but it deserves more than what I can really give to it, so I’m gonna send it to Relapse.’ We’re like, ‘Alright.’ And we heard from Relapse the next day.”

That album, Sonoran Depravation, instantly became an underground hit, striking a perfect point between the grand death metal of bands like Behemoth and the esoteric ooze of rising underground stars Full Of Hell and Blood Incantation. Suddenly metal stars with their ears still close to the ground were singing Gatecreeper's praises, including Soulfly frontman (and fellow Arizonan) Max Cavalera and death metal legends Cannibal Corpse, who brought the band out on tour with them and Power Trip in 2017.

“It was pretty surprising,” said Eric, “because we hadn’t really even thought about how well it was gonna do. For me, that was the first full-length record I ever wrote, so I didn’t know what to expect. But also, we tried to make sure that we didn’t release anything that we don’t feel completely good about. If there’s one part in a song or a part of the album that we don’t like, we take it out. It doesn’t matter if I spent two months writing it, or what my ego feels toward it -- if it doesn’t feel right we take it out.

“I don’t think anybody expected the band to become a landmark in the movement or anything like that,” says Nate. “I try not even to think about that. I spent a lot of years trying to be goal-oriented with goals outside of just making a good album. I think that if you just put all of your effort into making the best music that you can make, anything else will follow, or it won’t. But, no matter what, you’ll have a meaningful piece of art that you’ve created. At the end of the day, that’s what survives.”

Not only was the band scoring tours with some of the scene’s most important artists, they were also branching out within the changing music scene as a whole. The band performed with metallic rapper Ghostemane, and photos of them playing beer pong and hanging out with Post Malone -- long before the latter’s collaboration with Ozzy Osbourne -- gave them an extra boost of public interest.

While Nate is quick to dismiss the notoriety the band saw from hanging out with Post -- “It’s people jacking each other off with social media hype” -- other members of the band acknowledge that it speaks to Gatecreeper’s broader appeal.

"I think that, compared to other death metal bands, the way that we write songs is a little bit more accessible to people who might not be just straight die-hard death metal fans," says Chase. “Whether it’s just stuff that we’re into, not just metal, and we’re not really afraid to talk about, whether it’s rap stuff or mainstream stuff. Or since we have an association with hardcore, because we’re interested in that -- through that, we meet different people. I think we have the ability to draw people in who are unsure about it or just getting into it.”

“We definitely write music that’s almost like rock’n’roll structure,” says Eric. “We’ll have a chorus, and there’ll be verses, and there’s repetition in the song, and I feel like that gives it a catchiness that a lot of bands don’t have nowadays. I love chaotic death metal that has a linear song structure, but I just really love bands that repeat stuff. I love when the song flows really well. We work really hard on that, and I feel like maybe that has made us more acceptable to a wider audience, and may have contributed to our success.”

Just as refreshing as Gatecreeper’s song structure is their subject matter. Sonoran Depravation’s title references the Sonoran desert that stretches from Arizona to California and Mexico; the album's cover an epic sunset over a sandy rock formation. The theme is continued and played upon with Deserted, whose title hints at the void of the Arizona’s vast deserts, but whose cover -- illustrated by Brad Moore, whose work has adorned sleeves for Tomb Mold and Pale Divine -- shows the teeming life that dwells in the ocean of sand. That unique perspective is one the band is happy to roll, and one which they think sets them apart from other bands like them.

“All of us have roots in Arizona, most of us were born and raised there, and I feel like we don’t get that much love,” says Eric. “We have a lot of pride for Arizona. It’s unique and different. It’s cool to be able to wave the desert flag. There’s other bands in Arizona for sure, but we’ve been doing pretty well, so it’s nice to shed a light on that area, bring people’s attention there. I feel like the desert is like a metal landscape. It’s a theme that’s ingrained in us musically and personally.”

“It does influence us, our lives, our music -- especially right now as I talk to you,” says Chase. “It’s like a hundred degrees outside. It’s like that for all summer. It’s an important part of our band."

For a young band with such momentum, taking time off touring in order to record the follow-up to their critically-acclaimed debut wasn’t easy. For Deserted, the band had to force themselves back in the studio -- even if it meant giving up some awesome opportunities.

“We had to draw a line in the sand,” says Nate. “For sure. If we had just kept taking offers -- and good offers, stuff that we really would’ve loved to do -- we might not have been able to record another album for another two years.”

Thankfully, the fruits of their labor don’t disappoint. Deserted shows Gatecreeper further embracing into their sound, incorporating a richer guitar tone and more elaborate drum accents and blastbeats. Chase’s roar also has wider breadth, ranging from an intestinal growl to a pained bellow. On tracks like Everlasting and Ruthless, the band showcase a greater understanding of their sonic identity while still managing to punch through a listener’s sternum with raw death metal barbarity.

“I’m really excited for people to hear it,” says Chase. “Anybody who’s heard it has been really into it. I think, for Gatecreeper, it’s pretty simple and it’s pretty obvious what our sound is or what our influences are. I don’t really ever want to change that too much.”

Chase’s sentiment echoes through the whole band. For all the hype and enthusiasm surrounding them, Gatecreeper seem to be taking things in stride. In their minds, they've have come further than they’d ever expected, and are content to live the death metal dream in its purest form -- get out there, play some killer riffs, leave some fans with bruises, and move on from there.

“I just want to go full force,” says Eric. “Right now, in my life, this is like what I want to do, and I have since I was 13. This is what I want to do, this is where I’m happiest. I’ve done nine-to-fives and yeah, maybe they’re more steady, or maybe your life isn’t chaotic, but I love being on the road, I love writing records, I love playing live. I really want to play festivals in Europe. Play some of the big festivals, that would be really fucking cool. That’s how we work. Maybe there’ll be a day where we don’t feel that way, but I don’t think that’ll ever come. “

Gatecreeper's Deserted comes out Friday, October 4, via Relapse Records, and is available for preorder.

Make sure to catch the band live on tour with Exhumed at one of the dates listed below: