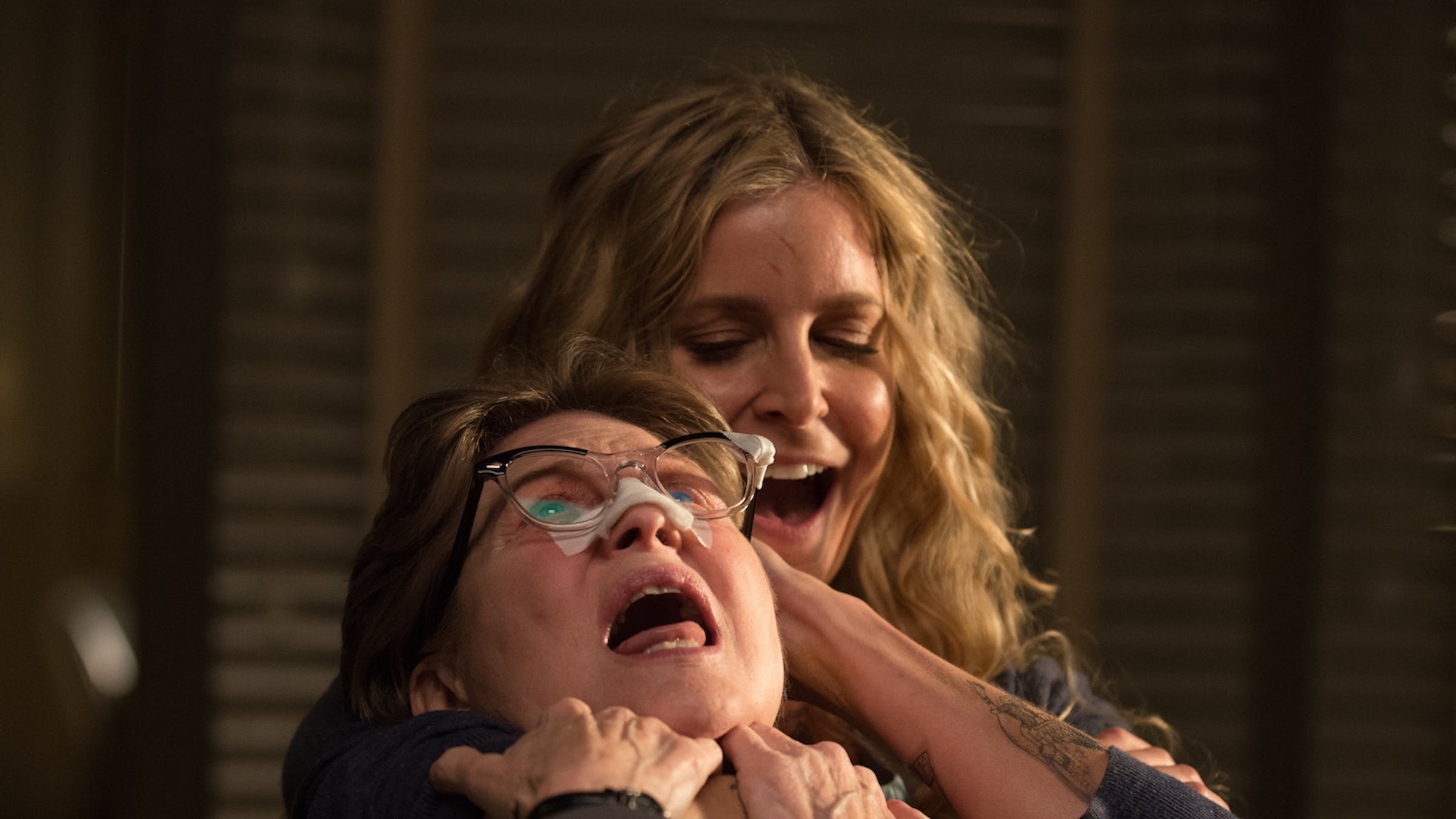 Your average horror viewer might be surprised by how funny Sheri Moon Zombie is. It’s just that over the course of her career, the actress has starred almost exclusively in the films of her husband Rob Zombie -- which usually involve her either brutally murdering people or fending off violent forces beyond her control. At some point in almost every film she’s been in, Sheri has been smeared with blood and grimacing as she swings an edged weapon. But talk to her on the phone and you’d be surprised at how much you chuckle along with her. Ask her a super arty film question -- say, how Rob has grown as a director in sixteen years -- and she’ll make you laugh at yourself.

“I’m not sure [Rob's growth] something that I’m super conscious of or pay attention to,” she says. “I’m growing with him, so it just seems like he just wants to get better and better. This is a passion for him, so it just makes sense that he’s going to get better.” Then, the grin appears in her voice: “I mean, what’s the point otherwise? ‘Man, next time I do something, I’m doing it REALLY half-assed!’”

Sheri’s performance in Rob's latest film, 3 From Hell, is anything but. Reprising the role of Baby, the psychotic wild card of the Firefly family featured in Zombie’s 2003 debut House Of 1,000 Corpses and 2005 game-changer The Devil’s Rejects, Sheri bristles with excitement, insanity, and -- of course -- comedy, leaving the viewer so gripped by her unpredictable behavior that they can’t take their eyes off of her. This time around, Baby steals the show, winning knife-throwing contests, dropping assassins with bow and arrow, and leaving a trail of mutilated bodies in her wake to the delight of audiences everywhere.

Wait -- did 3 From Hell’s crew include a joint-rolling instructor?

“Yeah,” says Sheri, the grin breaking through her voice once more, “her name is Mother Earth!”

What was it like returning to Baby Firefly all these years later?

I’ve been really apprehensive about it, and in fact did not even want to reprise the role. I thought Devil’s Rejects left it at a good spot, and there’s always the chance of...you want to leave a good, lasting idea and memory, for the project, for the fans, for sentiment even. And I was nervous about, ‘How can we make it better?’ And then Rob wrote the script, and I immediately thought, ‘Wow, we have to do this! It’s totally a continuation!’ So then, stepping back into Baby’s shoes was a delight. I love playing her, she’s so much fun, and more nuanced and wiser in her own ways. I had a blast!

Above: Nobody puts Baby in a corner. Photo courtesy of Lionsgate UK.

There’s a general consensus that this was Baby’s movie -- was there something different you brought to the character this time around?

Well, I think of it as, that was always her, it’s just Baby grown up. You’re seeing what happens to a character or person who grows up in a psychotic, maniacal, murdering family. That was the path we thought she should take. And her psychotic-ness and her schizo way with each person she encounters just gets more honed and developed as she matured.

As far as that kind of stuff goes, that was all Rob. I didn’t necessarily think she should start mastering certain weapons. But it was a cool thing that she did, and that was definitely Rob’s writing. And it was really cool to learn archery, and practice knife-throwing!

Richard Brake is the most notable addition to the Fireflies in this movie. What do you think he brought to the dynamic in 3 From Hell?

Richard’s an amazing actor, and amazing to work with, and he just came right in last-minute. I’ve known him for a while now, as we’ve worked on a few of the same movies, and he has such focus. He just seemed like a natural member of the family, and to Baby and Otis. I loved his whole character, and I loved watching him and Bill together -- it was a great addition.

In your last film with Rob, 31, you played Charly, a real no-nonsense female heroine. Do you prefer playing more straightforward characters, or unpredictable villains like Baby?

I don’t even look at it that way. Each character is so different and a challenge in its own way. My favorite thing is not to do the violence. But that comes with every role I’ve played in some sort of fashion, whether I’m involved physically with it. It’s just happening to my character sometimes. But that’s part of just making art -- you can release your whatever. It’s an outlet.

Do you and Rob have any rules or practices in place that separate your work or private life? When you get on set, is it purely professional?

No, we don’t have special marriage rules for work and home -- we’re just ourselves all the time! I would imagine that plays a huge factor in being able to let go and do my job. I have to totally trust the situation, and there’s no one I trust more than Rob. I don’t think we look at it as work and home life as separate things. I mean yes, ‘I’m going to set today and you get to stay home’ -- that’s obviously work. But we’ve done lots of projects together, and some of them are movies, some of them are music videos, some of them are projects that nobody sees. There are a lot of facets and it’s not just a working relationship once every two years.

Rob Zombie’s 3 From Hell is out now on Digital Download, Blu-ray and DVD from Lionsgate UK.