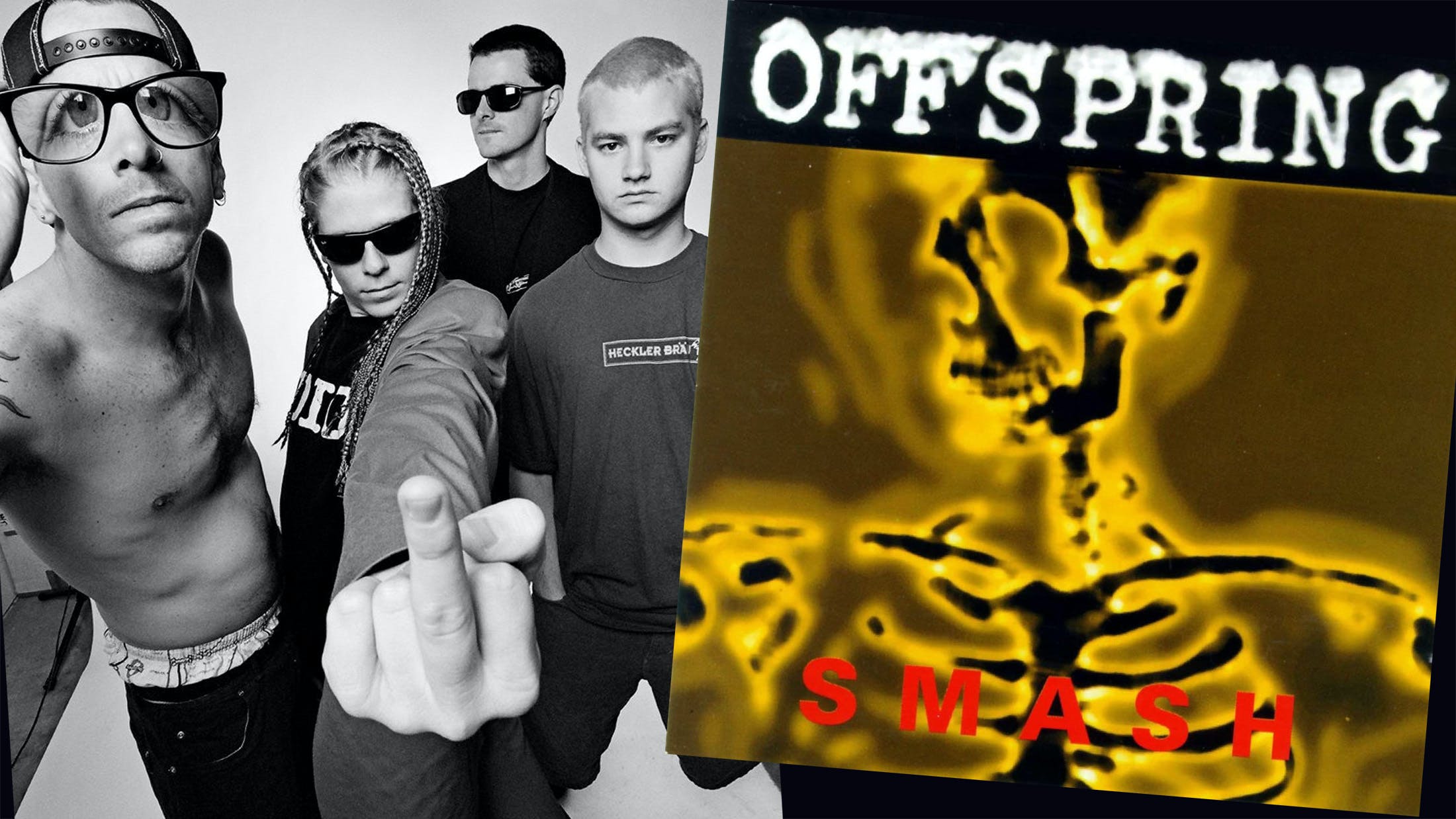 In February 1994, Brett Gurewitz was driving to his home in Studio City, California in his 1984 Volvo station wagon, listening to the final mixes of Smash, The Offspring’s forthcoming third album. With the tape deck cranked as loud as it would go, he circled the block “maybe 20 times” in order to listen to the music “over and over and over and over again”. When he did finally slow the vehicle to a stop, he walked through his front door and greeted his then-wife, Maggie, with the words, “Honey, everything’s going to be different now.”

Then as now, Brett Gurewitz was the owner of Epitaph Records, the punk rock imprint to which The Offspring were signed. The release of Smash on April 8, 1994 saw the company’s (and not to mention the band’s) fortunes change in a radical manner. Previously, the Orange County quartet had shifted somewhere in the region of 30,000 copies of Ignition, their impressive second LP. Epitaph’s most successful artist, Bad Religion, for whom Brett Gurewitz plays guitar, might have been selling a hundred thousand records, but he still saw Smash’s 50,000 worthy of honouring with an ice-cream cake party. See, Brett saw such a number as being “punk rock gold”. The reason for this was, he says, “because we could never have an actual gold record!”

He was proved wrong. By the end of 1994, Smash had become the ninth best-selling album in the entire United States, as well as a – ahem – smash all over the world. Propelled by the ubiquitous lead-off single, Come Out And Play, the album, along with Green Day’s Dookie, took American punk rock to the U.S. mainstream for the first time in its 18-year history. The difference between the two acts, though, was that unlike Green Day, who were signed to Warner Bros., The Offspring’s success was achieved on a small independent label.

With demand for the album taking off, Brett remortgaged his home in order to pay for the pressing of extra copies. By the summer, pallets of the record were stacked high on the pavement outside of Epitaph’s headquarters on Santa Monica Boulevard in West Hollywood, as well as at hastily-rented spaces all over the city. So impressive were the sales numbers that Sony Music offered Brett an eight-figure sum for a 49 per cent stake in his company, an approach that was declined.

With more than 10 million sales to its name, Smash remains the best-selling independently-released rock album of all time. Not just that, it is also one of the great eternal punk rock bangers. This is the story of how it went down…

Dexter Holland (The Offspring, vocals/guitar): “Prior to Smash there were a lot of things that happened that seemed arbitrary at the time, but which ended up making a big difference. Getting new equipment was one. The equipment that we had was sub-professional. We weren’t capable of making a record that sounded good enough to be considered by the people who ran radio. It just seemed like a good idea to call [Offspring guitarist] Noodles and say: ‘Can we take some of the band money and buy one amp to share?’ And that’s literally what it was – one amp and one cabinet. And I think Ron [Welty, former drummer] borrowed some money for some new drums. But it wasn’t like, ‘We have to do this because our future depends on it!’ It was a case of, ‘This seems like a good idea.’ Looking back it ended up being pretty important.”

Noodles (The Offspring, guitar): “It wasn’t like we spent a lot of money recording Smash. We couldn’t even afford a hotel room for our producer [Thom Wilson]. He had to sleep in a camper van for the whole time we were making the record!”

Jim Lindberg (Pennywise, vocals): “I first heard Smash when The Offspring supported us on tour, just before the album came out. I had the feeling that the album was going to be enormous. I could tell that there was something going on that was so catchy and so perfect for radio.”

Noodles: “I never listen to The Offspring’s songs unless I’m playing along with them!”

Dexter: “[Prior to Smash] the real measure of where punk bands were was Bad Religion, who were the kings of Epitaph. And they sold 100,000 records. That seemed to be the limit; that was as far as anyone in the world could go. A hundred thousand was it. So that was about as much as I thought we could do.”

Brett Gurewitz (Epitaph): “I couldn’t believe how good the songs were, or how big they sounded… We sent Come Out And Play to [LA radio station] KROQ and they literally called my office and said, ‘We’re putting this into power rotation.’ They called me personally and told me that, and the next thing you know you couldn’t turn on the radio in LA without hearing the song. That was the first time that had happened for any band on Epitaph.”

Dexter: “It was very surprising when things began to move so quickly. Just a couple of years before, there was no punk rock in the mainstream – at all. And we knew that, and we’d chosen our lot. We said, ‘Well what are we gonna do? Are we gonna move to Sunset Boulevard and become a hair metal band?’ Well no, because that’s not us… and then suddenly we were all over the radio, and on MTV too.”

Noodles: “Prior to Smash, we were pretty much a part-time band. Even when we blew up, I didn’t even quit my job [as a janitor at the Earl Warren School in Anaheim] outright – I took a three-year leave of absence. I was still working there when we were blowing up ’cause I’d promised my boss I wouldn’t quit until the end of the school year. There was this one high school girl that I knew [there] and she used to see me in the morning and say to me, ‘Man, what are you doing? I just saw you on MTV!’”

Dexter: “I remember the USC [University of Southern California] marching band started playing Come Out And Play. I was shocked! I was on the couch one Saturday watching TV and sort of dozing off, and I thought I heard us as the camera faded to commercial. And I thought, ‘Wait!’ I never had serious ties with the school band when I was at USC, so I sent them a letter and said, ‘Hey, I’m very flattered, maybe we can be friends.’ Apparently they thought it was a joke by a rival university! So I had to call them and go down there and say, ‘No, no, it’s me! I think it’s cool. I don’t want anything!’”

Noodles: “There were a lot of things at that time that we didn’t do. We didn’t do any late-night TV shows until Days Go By [in 2012]! On Smash, we turned down Saturday Night Live, simply because we didn’t think we were good enough. Again, I think that has something to do with the fact that we were a part-time band.”

Dexter: “I remember having a big discussion with Jim [Guerinot], our manager, and he said, ‘You know this is very new for you guys. I’ve seen the way the industry can really chew up people. Look at Kurt Cobain…’ I sensed there was a change where people wanted to back away from all the exposure. And there can be a personal cost to all this. And he was, like, ‘Why don’t we go slow and see how things go?’”

Noodles: “We did do the Billboard Awards, which was on TV, but it wasn’t widely viewed. The organisers were pissed off that we played Bad Habit rather than one of the hits, but we thought, ‘We’re punks. We’re not a pop band. Let’s go out and fuck things up a little bit.’”

Dexter: “We actually considered playing Too Drunk To Fuck [by Dead Kennedys] at the Billboard show. In the end we played Bad Habit. But we played raw, and at the end I dived into the crowd. I remember the looks on the faces of the people at the front as I did this, and thinking, ‘Wow, these aren’t the same people that come to see us when we play [punk venue] Gilman Street!’”

Noodles: “I’m not a nostalgic person, but I remember enjoying that year [1994], for sure. There was a lot of heady stuff going on, and there was some stress too, but it was such an exciting time. I remember our friends’ bands were getting more notice, too. We were touring with Rancid at the time and Madonna wanted to sign them. She even came to one of the shows… she watched Rancid and then left before us!”

Brett: “As punkers, our allegiance was to the indie stores… [and] suddenly these stores were flourishing because they could buy The Offspring’s Smash, and they were selling tons of the things. It helped indie retail. It helped fanzines and magazines. It raised the sea level within the whole punk community. There are distributors in Europe and Australia that cite that time as the period when their companies grew and they were given the opportunity to establish themselves. So it had a very powerful knock-on effect. Those are my people, so I’m really proud to have played a part in all of that.”

Dexter: “The fact that we did it independently seems even more significant now. It’s the part I’m most proud of. The success we had came off our own legs. There wasn’t this huge promotional machine behind it. And promotion doesn’t detract from how good a record is – sometimes you just need a push to get people to hear something that’s worth hearing. But we didn’t have that. We had to get jump-started on our own. I loved that time. No matter how good things were after – and there’s been some great times – there was only one time when we went from almost nothing to all the way up there. It was an amazing thing to be a part of.”

The 20 greatest The Offspring songs – ranked

From 1989’s self-titled LP to Ixnay On The Hombre and beyond, we rank the Californian punk-rock legends’ biggest tunes…

World Of Tanks celebrate the release of The Offspring's Let The Bad Times Roll with limited-time-only in-game content – including the TL1 LPC Pretty Fly tank.