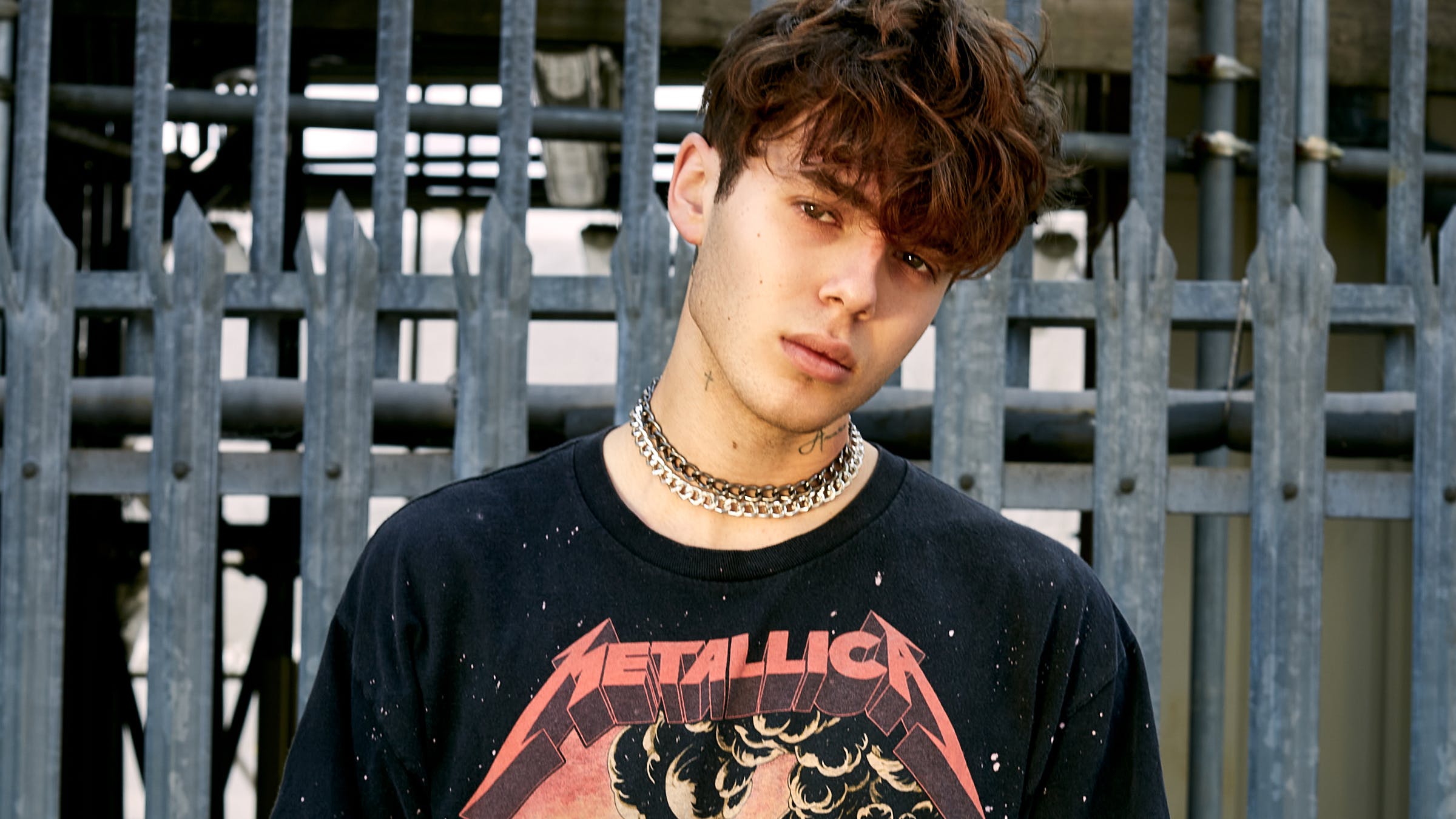 “If I carried on the way that I was going, I wouldn't be alive and speaking to you right now. It's a miracle that I'm clean, sober and happy. To be honest, I didn't see myself living past a certain age – I thought I'd be dead before I turned 20.”

For someone only 22 years old, Harry James has been through an awful lot. The London musician, who performs as Kid Brunswick, has battled substance abuse, been through rehab, and experienced a childhood that saw him bounce from one school to the next as a complex home life led to a distrust of others. Having made it out the other side, Harry – who now adopts a straight-edge lifestyle – is fully focussed on his music. Despite having not played a single show, he’s amassed a significant online following off the back of debut record we surround ourselves with chaos, released in 2019, and the recent singles from XFOREVER, his new mixtape that drops this Friday (July 30).

A chaotic coming together of punk, hip-hop and alt.rock, there’s a genre-fluid approach akin to artists like De’Wayne and YUNGBLUD present across his music, but the sound of Kid Brunswick is altogether much darker than these artists, mirroring the complex and messy path his life has taken so far. Having always felt like something of a loner, Harry is happy for his songs to exist in a world all of their own.

“I like being on the sidelines,” Harry says. “There are a lot of people at the moment who are part of this new alternative revolution, but I quite like sitting back from it. I'm not as big as KennyHoopla or YUNGBLUD or anyone like that – I’m enjoying being a little underdog just waiting for my time to shine. Because I know that I've got a lot to say, and I know that what I've got to say is real, it’s true and it’s honest.”

Harry is right when he says his profile isn’t yet at the heights of these new scene leaders, but that doesn’t mean he hasn’t attracted some noteworthy fans. Linkin Park leader Mike Shinoda was so impressed with 2020 single Bipolar Rhapsody that he reached out to Harry about a potential collaboration, which in turn led to him executive producing XFOREVER and lending his production and songwriting talents to a number of tracks.

Speaking to Kerrang! about what attracted him to Kid Brunswick and the XFOREVER project, Mike reveals that it was the instant connection he felt with Harry’s music, as well as his fresh approach to blending sounds, that made him want to work with the newcomer.

“I thought Bipolar Rhapsody was spectacular, especially for a ‘new’ artist,” Mike says. “I immediately connected with it and wanted to see what else he was working on. My main input with regards to the record was asking him to take a step back and look at the bigger picture on a couple of things, and those suggestions seemed well-received. A lot of it was just sharing my experiences as an artist in general.

“I worked on a couple of songs on XFOREVER called The Feel and Skin, both of which are great, and we’ve spoken about doing more in the future. Blending genres like this isn’t a new thing, but what changes – and gives definition to who people like Kid Brunswick are as artists – is choosing what things to blend, in what amounts, and figuring out what original ideas you can bring to the party.”

Describing the experience of working with Mike as “fucking insane… Meteora is my favourite album of all time – he’s a true hero of mine,” Harry had some initial reservations about inviting an outsider into the creative process because of how personal the music of Kid Brunswick is to him. But with Mike taking a back seat and only getting involved once the basic outline of the songs was written, the two hit their stride.

“Mike basically said to me, ‘Write some songs, we'll work on them together, structure them together, talk about the project and what it means to you and approach this as a team,’” Harry recalls. “I was like, ‘Holy shit – I thought he’d just want to work on one song!’ To my knowledge, I'm the only British artist that he's come on board and executive produced thus far, which is nuts. Mike seems to really love the record, and I’m unbelievably excited about it too.”

An ode to the straight-edge movement and the struggles of his past, XFOREVER is a dark and deeply personal record, but so too is it designed, in Harry’s words, to be “a statement of self-discovery that can be applied to a lot of things”. Not all who hear it will be able to relate directly to tales of addiction, depression and eating disorders, but it’s in the way Kid Brunswick tells these stories – with honesty, empathy and a hint of the dramatic – that will draw people in. XFOREVER is the closing chapter of the first part of Harry James’ life, and one that opens the door to a future where he’ll no longer be sat on the sidelines.

“Whatever you’ve gone through in your life, I’d like to think there’s something in this record that you can identify with,” Harry concludes. “Writing this record, I finally feel like I've been able to accept myself, and that's what XFOREVER is really about – it’s exposing all your shit and your demons, and instead of letting them completely beat you up, you’re getting help and learning how to fight them one day at a time. It's pretty fucking deep, but it’s exciting, and it feels like an important moment for me. I’ve always believed that what I’ve got to say is real and true, and that’s what gives me the confidence that this music will connect with people.”