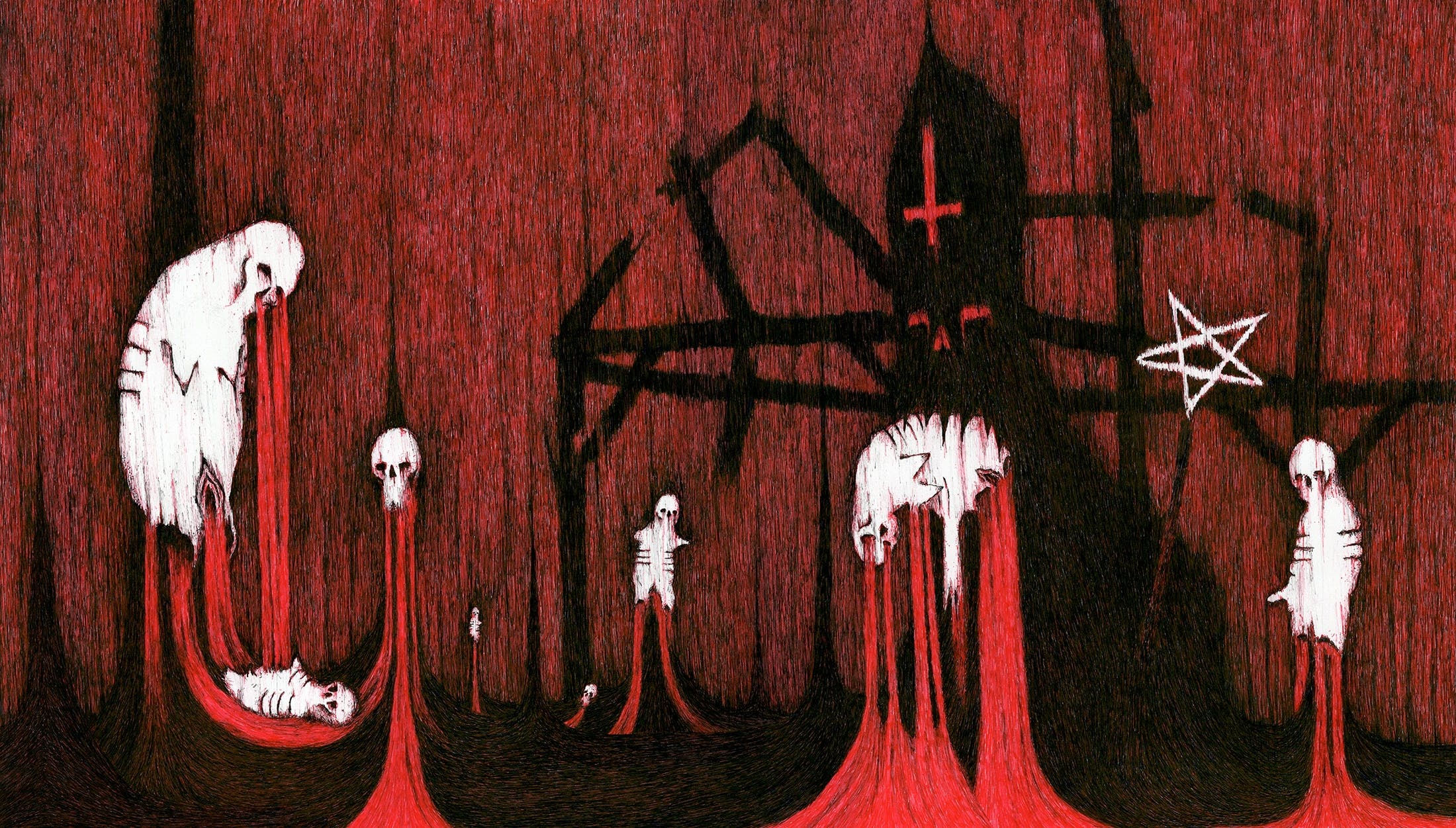 Chances are, you probably don’t want Justin Bartlett painting your wedding day portrait. The San Diego-based artist (alias: VBERKVLT) specializes in a dark, black-metal-inspired style of pen and ink-based drawing that has provided a wide range of extreme metal bands with imagery for their albums and merchandise, with a client list that includes Trap Them, Gatecreeper, Bolt Thrower, and Dragged Into Sunlight, among many more.

“I draw mostly ‘metal’ subject matter in varying degrees of abstraction, exaggeration, and simplification,” he explains. “Although my art does have underlying rules, drawing in this way helps me break from the literal world.” In other words, the dude escapes from the stresses of every day life by inking heavily textured goats, corpses, and demons amidst plenty of occult symbolism.

He describes his style as “very time consuming and overly detailed…expressionism” – but for many onlookers, the word “disturbing” often comes to mind. “I think most people would find the depiction of some strange ritual inside a dripping, rotting cave to be a little strange…. But in terms of being truly disturbing, or ‘dark’ -- that’s really in the eye of the beholder. It all comes down to your frame of reference. I’m sure the average Kenny Chesney fan would be a bit more ‘disturbed’ by my artwork than the average metalhead.”

And his connection with metalheads is no accident; a fan of post-punk, industrial, and electronic music from the age of ten, Bartlett became enamored of heavier music as he got older, while dark and frightening aural/visual pairings became his greatest inspirations. “Dan Seagrave’s nightmarish visuals accompanying the musical violence created by Entombed on Clandestine, are just as important to me as something like Morricone’s score to John Carpenter’s The Thing,” he admits.

As big fans of his work, we asked Bartlett to give us the backstory for ten of our favorite pieces. Check out the amazing artwork below, along with short explanations for each.

"Since the band were named after a film called Trap Them and Kill Them (the alternate title for the Italian movie, Emanuelle and the Last Cannibals), the disembodied heads are meant to evoke a sense of despair from the ensuing misery of being trapped. I always thought of the name referring to the traps or miserable situations that societal masters have created for us in a larger sense, though, and not simply just black and white gore."

"The idea behind this piece for the band Detritivore was their album's title: Pakt. The cover depicts a pact between Satan and the papacy. The image you see here -- with the church remains and the pope-like beast -- is the inside illustration, depicting the post-agreement fallout. Inspired by Sadistik Exekution! "

"Does anyone remember the humanoid flying characters from Beastmaster? The creatures with wings that can pulverize their enemies into a glowing green slime. I've drawn dripping wings many times. Dripping slime and metal seem to go together. This piece was originally for a Relapse Records skateboard."

"A tribute to the master John Carpenter and his incredible achievement in horror history. Originally, this was for a VHS themed art show, but poster versions were sold during a film festival's fundraiser to help abused animals. Chosen and approved of by Carpenter, too!"

"Sigurd Wongraven of Norway's Satyricon is the founder of Wongraven Wines. Considering Sigurd's stage name Satyr, the reasoning behind the artwork shouldn't be too hard to figure out. As requested, I drew upon Guillermo del Toro's "Pan's Labyrinth" as a reference."

Southern Lord (Power of the Riff)

"One of the dozen or so Southern Lord Records projects I have worked on. I created the logo and main illustrative elements for the first Power of the Riff festival's promotional materials. This is of a being decomposing into sound energy from riff vibrations.... I remember spraining my wrist at the show during Repulsion’s set."

"The Secret is a killer hardcore band from Italy [for which I designed a logo]. I know that 'hardcore' can mean anything from Nails to Heresy to Earth Crisis -- but they shred, and that's all you need to know. My goat design for Solve Et Coagula is apparently pretty legendary at this point -- but that's due to the band's music on the album, not my artwork!

"Italy's Grime were heading out on tour with -(16)- and Noothgrush and asked me to provide a tour shirt illustration. Apparently because of the iconic goats I drew for The Secret, a lot of Italian bands know of my artwork and seem to really like it. I love Italian food, so it makes sense, of course."

"The antlered deity and other figures were based on the album photography from Future Cult by an artist known as Mothmeister. The Lion's Daughter had mentioned they liked the idea of a movie poster. With that concept in mind, I designed a logo and illustrated an imaginary film scene based on their existing imagery."

"One of my favorite pieces! A huge pen-and-ink illustration that depicts crypto-zoological monstrosities engaged in torture-porn. Just a normal day in the depressive doom underworld that Moss created on their Cthonic Rites album. This is a 24-by-36-inch illustration."

The much-loved crew of maximum crust look like they’re bowing out with a trio of November gigs.