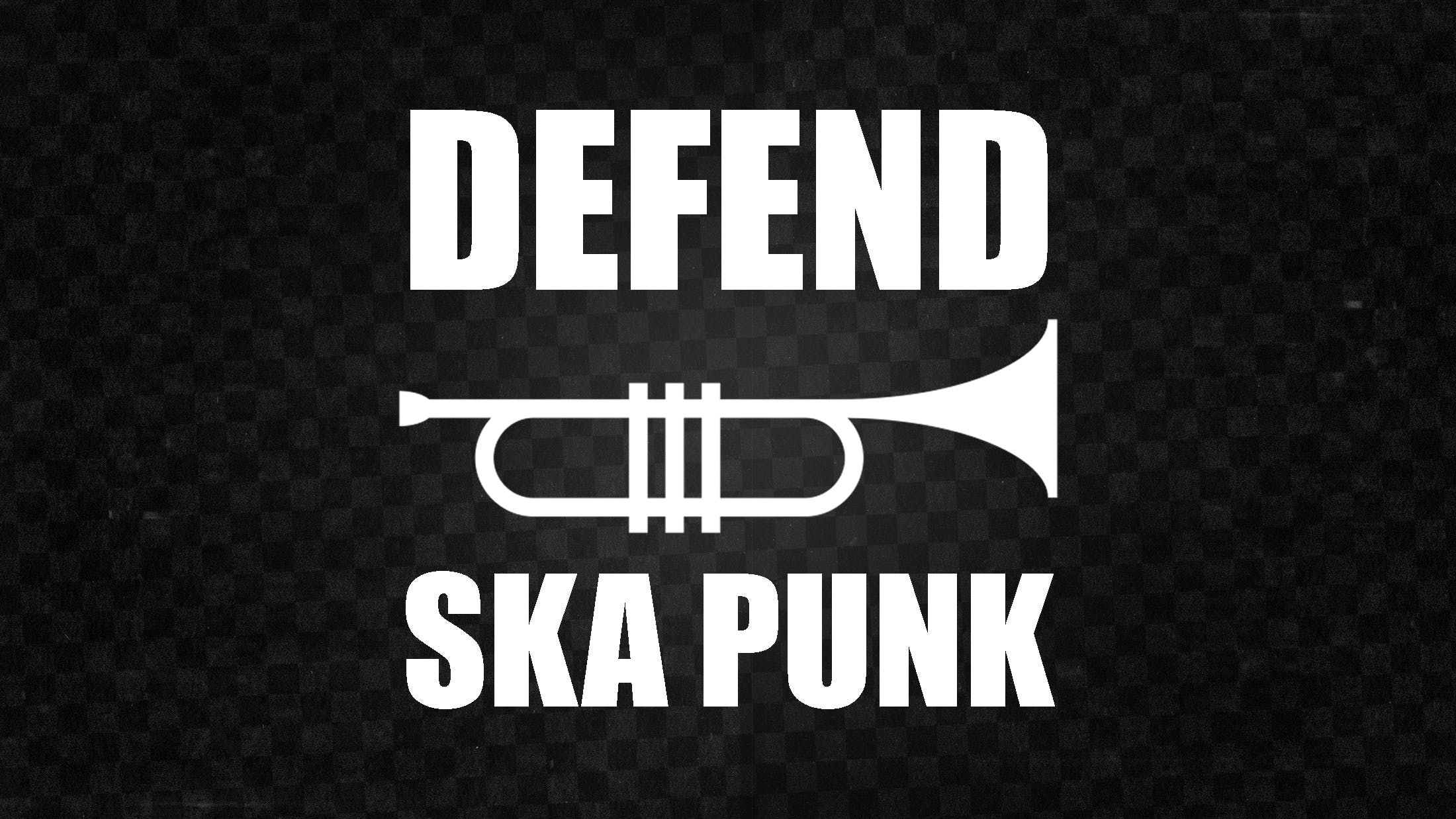 Kerrang! writer John Longbottom dons his pork pie and checkered Vans and goes to bat for the most reviled genre in all of rock music. Poor lad…

Is there any genre that immediately invokes as much ire and ridicule from rock fans as ska punk? No. No, there isn’t.

And, believe me, nobody gets why more than I do. A quick rummage through my record collection and you’ll find Converge, letlive., Modern Life Is War, Hot Water Music, Metallica and Black Sabbath records. All a far cry from the jaunty trumpet solos and upbeat riffs of ska punk, but I feel it’s time to come clean. I have a secret. Come close and I’ll share it with you…

As well as being smitten with the aforementioned bands – bands which you can stand up in public and say, ‘Man, these guys are great’ without somebody rupturing a ribcage laughing at you – I am also a huge ska punk fan. Sure, laugh it up. But I’m here to fight the genre’s corner. Defend pop-punk? Why bother? Pop-punk doesn’t need defending. Ska punk… now there’s a worthy cause.

Reel Big Fish. Less Than Jake. The Mighty Mighty Bosstones. Catch 22. Save Ferris. Sublime. Most of you reading this will be flinching at the very mention of their names, having flashbacks of rock club nights rudely interrupted by a three-song-whammy of Gainesville Rock City, She Has A Girlfriend Now and a brassed-up version of Come On Eileen.

You can try to stifle your mockery, but an uncontrollable snort of superiority will inevitably erupt from your nose eventually. 'Toot toot!' 'Cheesy-wacky-trumpet music!' 'Hawaiian shirts and two tone sweatbands!' I get it. It’s not what people consider ‘cool’ – and that’s fine. The first thing about ska punk that you need to accept and embrace is that ska punk isn’t cool. It never was. It never will be. And it doesn’t care.

Ska punk by its very nature cannot be cool. It’s a genre made up, in part, of high school band dropouts. People who trailed saxophones, trumpets and trombones back and forth to music lessons – and then suddenly hit their teenage years and wanted to be in a band. Ever seen a thrash band with a trombone? No, you haven’t.

Learned guitar, drums or bass as a kid? Great, the world is yours. But where do all those adolescent brass players go then? They gravitate towards a genre with a never-ending appetite for brass players. Or at least they did. Because the scene is almost dead (stop celebrating, please) and, while you can’t change the tide, that is a massive shame.

To a generation of die-hard music fans across the UK and U.S., the golden age of ska punk, which rock historians will agree occurred in the late '90s to early 2000s, was a creative outlet and refuge for some of the most dedicated musicians and fans in the world.

But wait, before we go any further, this compelling tell-all into the twisted mind-set of a ska punk fan goes deeper still. I play saxophone. I was in a ska punk band. We were extremely enthusiastic, but by no means successful… and it was possibly the best time of my life. See, the other thing you need to know about ska punk, is being in a ska band is hard. Not only have you automatically signified to the rest of humanity that you’re done giving a shit what people think, you also had to organise upwards of seven people to be in the same place at the same time for band practice.

Ever tried going on a three-week UK tour with nine people and all of their instruments and gear packed into two Nissan Micras? All those interchangeable brass players have to sit somewhere. But we did it for the love of the genre. That and all the cheap booze and kebabs we could handle. There was also a glimmer of something bigger, however. Money, fame, a tour bus that wasn’t your mum’s car… Because, although it may seem inconceivable now, ska punk seeped into the mainstream.

Load up FIFA 2000 on your PS1 and you would be greeted by the raucous noise of Reel Big Fish’s Sell Out. Chuck on Tony Hawk’s Pro Skater and get ready for the upstroke guitar riffs of Goldfinger’s Superman. The Mighty Mighty Bosstones were in Clueless and Save Ferris were in 10 Things I Hate About You. Ska punk was a big deal… and there were a lot of fans. Fans which have either evaporated into thin air or, like me, are still out there today…

And that’s the third thing to remember when you’re pissing your pants laughing at ska punk: there are more fans than you might think. Who knows, maybe this piece will activate a sleeper cell of Hawaiian-shirted devotees, rallying them to take up arms for the long-threatened ska punk revival. Maybe not, but the genre’s legacy still exists today.

ninepoundnote gearing up for tour

On a UK level, off the top of my head, I can think of more than 10 hugely influential people in the music industry, in senior positions at record labels, festivals and in recording studios, who were in ska punk bands. People who have taken the same die-hard attitude that being into ska punk required and made a very successful career out of it, passing their unrelenting love of music to the next generation.

Lightyear (who notably were banned from Reading & Leeds for crashing Ice-T’s set dressed as a pantomime horse – classic ska band antics, right?) are currently documenting the oral history of UK ska punk with a crowd funded film called This Music Doesn’t Belong To You – exploring the almost-forgotten scene of musicians, promoters and DIY label founders who poured their time and money to make sure that every kid, in every shit town in the country, had a choice of three or four gigs to go to every weekend.

Because while nu metal was pumped in from across the Atlantic via the TV and radio, the reality is that bands like Capdown, Sonic Boom Six, Adequate Seven, Jesse James, Random Hand or this really awesome band called ninepoundnote (who really never got the attention they deserved and had a really handsome/intelligent sax player… ahem) played in your town. A million times. And sparked the imaginations of music fans on a local level.

On a global scale, those people are hidden in plain sight. John Feldmann frontman of Goldfinger is almost better known now for producing hits for everyone from Biffy Clyro, to Good Charlotte, to Black Veil Brides, to All Time Low.

The frontman of The Hippos – a ska punk band so obscure that even some ska fans haven’t heard of them – is a man called Ariel Rechtshaid, now regarded for his production, mixing and songwriting credits for Adele, Madonna, Usher, Charli XCX, Brandon Flowers and just about every household name artist in existence today.

Oh, and the former drummer of wackiest-of-the-wacky ska bands, The Aquabats… a band who dress as superheroes and sing songs about fighting sharks, is some bloke called Travis Barker. Throw in lead guitarist of The Blinking Underdogs, AKA Star Wars’ Oscar Isaac and more obvious success stories such as No Doubt’s Gwen Stefani and the list goes on and on.

So, next time you’re about take the piss out of someone’s secret ska punk past, remember this:

2. You might find the music cheesy, but being in a ska band is a tough gig that deserves more respect than you’d think, least of all because we’ve been the butt of everyone’s jokes for 20 odd years.

3. You might just find yourself pointing and laughing in a crowd of closet ska punk fans. Fans who are now shaping the landscape of modern music. So maybe don’t laugh quite so loudly next time or you might find yourself suddenly looking down the wrong end of a concealed trombone.