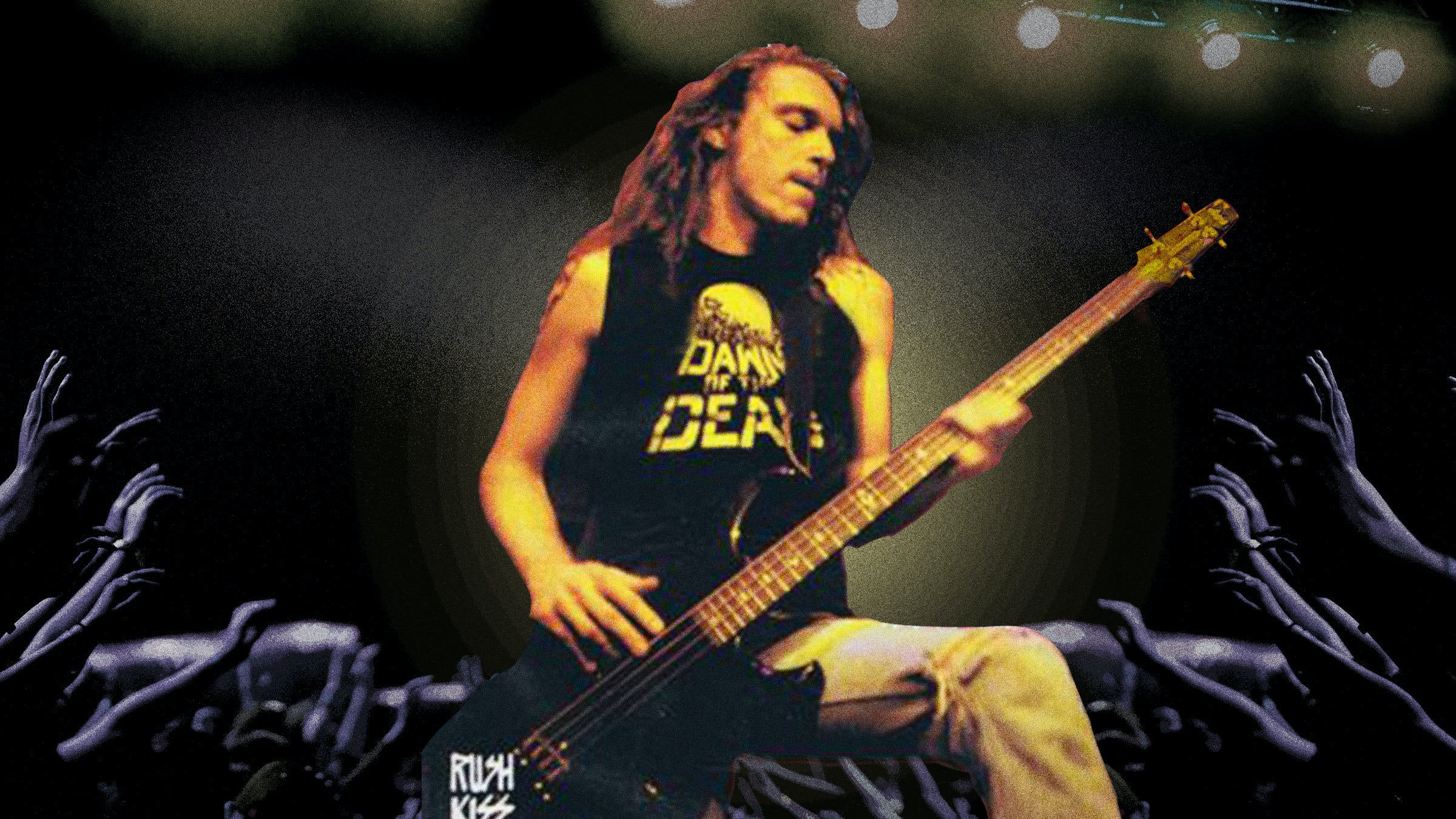 Cliff Burton, Metallica's second bass player, was born on February 10, 1962 in Castro Valley, California and died on September 27, 1986 in Kronoberg County, a rural area of southern Sweden. At the preposterously tender age of 24, he was thrown from and crushed by his band’s tour bus and immortalised as symbol of melding punk attitude and metal muscle into a uniquely inclusive artistic stance, an accolade not dissimilar to the mantle fellow bassist Lemmy Kilmister wore with gruff pride to his grave.

I was 16 and wandering around the halls of my high school in dreary Tacoma, Washington – a suburb just south of Seattle – when the news of Cliff’s death was delivered via the shaky voice of the same shaggy-haired kid who had originally gifted me my own copy of the infamous Metal Up Your Ass demo tape. It felt unreal and heartbreaking in a way that I had yet to experience as a young music fan. Metallica had carved out the prime spot in my heart, rivalling my fierce fandom for Priest and Maiden. It had been a scant six months prior that myself and the mostly male group of metalheads I claimed as peers gathered around a boombox in a mossy, wooded patch of an oddly isolated public park for a maiden voyage with Metallica’s third and arguably best album, Master Of Puppets.

I absolutely adored 1984’s Ride The Lightning and was so anxiously anticipating its follow-up that it didn’t even occur to me that the evolution of their musical ambitions might be challenging for me as a fan. About one minute in I remember thinking it might be too much for me. Battery was such a clarion, relentless mission statement of “bigger, better, faster, more” that I was dizzy and disoriented. I also have a distinct memory of looking at the dried pine needles poking out from beneath that Panasonic dual-cassette deck and wondering if they would start smouldering when the eight-minute-plus title-track kicked in. Stoned and clichéd projections of a teenage mind? Certainly, but not without metaphorical merit.

Any notion that Master Of Puppets was too much dissolved upon repeated listens and I soaked up more of the feelings that metal gave me which served me so well as a young woman: empowerment and agency. There were fields of cartoonish misogyny to navigate within metal, particularly when dealing with Los Angeles’ one-dimensional Sunset Strip drivel. Whether it was Mötley Crüe stocking all their videos with formulaic, voiceless femmes or Blackie Lawless letting us know that he viewed his dick as a saw blade, it wasn’t exactly a welcoming space for women. I shoved that nonsense aside as I got deeper into thrash while steadily feeding on the NWOBHM that initially got me to the table. At the time Metallica disavowed the value of MTV and couldn’t care less about a commercial hook, so there were no T&A videos, no lecherous leering, and certainly no pop pandering. While not all were overtly political, Metallica songs critiqued the death penalty, our failed mental-health system, organised religion, and the military industrial complex. When I listened to Disposable Heroes or Leper Messiah I felt emboldened to take on things I found frightening and comforted that there were others who preferred their metal rendered in its most pure and powerful form.

When the backbone of this sound was ripped away from us all so suddenly, the grief was visceral and charged with anger. Cliff’s bass playing wasn’t just technically impressive (though it was well-honed by his early devotion to classical music theory and diligent practice habits), it was revered for its innovative components.

The chromatic intro to For Whom the Bell Tolls was the subject of much nerdy analysis during auto shop class and virtually none of us understood the concept of bass going beyond foundational functionality until we heard (Anesthesia) Pulling Teeth, an early composition of Cliff’s brimming unexpectedly with wailing flange that became the centrepiece of the band’s debut. What’s more, he always seemed unpretentious and mischievous peering out from the pages of this magazine, one of the only ways we accessed images of our idols at that time.

Apparently this impression was accurate: His employer at a lawn and garden equipment store recalls one morning when he stumbled out to the yard to investigate a cacophony and seeing a teenage Cliff conducting an “orchestra” of lawnmowers that he had turned on simultaneously. This image is hilarious, but it also illustrates how relatable all us dorked-out metal fans found him to be – that shit sounded like something one of us would do in our parents’ backyard. By all accounts he was a very humble fellow who abhorred classic rock star posturing. “He just didn’t like the strutting types that so much of rock’n’roll musicians get to be when they get popular,” his father Ray Burton once told an interviewer. “He just liked to do his wild playing of heavy metal music. He never changed.” His vivid affection for the seminal punk of the Misfits was often on display, from his Crimson Ghost-tattooed shoulder to the shirt he wore on the back cover of Master Of Puppets. For suburban teens weaned almost entirely on the NWOBHM, this served as one of our earliest introductions to punk.

Like many other fans, I struggled to continue loving Metallica after Cliff’s sudden death. I attended a Master Of Puppets show in Seattle in December of 1986, still devastated by Cliff’s passing and more than a little wary of new bassist Jason Newsted. I caught and generally enjoyed two different stops of the epic …And Justice For All tour, but that album failed to connect with me on the deeper level the first three had. When I heard Enter Sandman from the Black album debut on Seattle station KISW one foggy fall afternoon in 1991, I simply burst into tears, realising my time as a Metallica fan was drawing to a close – or at least going into indefinite remission.

20-odd years after Cliff’s passing and a long tenure inside Seattle’s transformative music scene of the ’90s, my fandom evolved into a career in music journalism and independent radio. Metallica had other emotions attached to it at this point: Sanitarium now always made me think of Jason Baldwin of the West Memphis Three, a wrongfully convicted young man whom I had befriended after covering his case and the documentaries surrounding it, which featured a number of Metallica songs as part of the soundtrack. I wrote a music column for an alt-weekly that regularly featured heavy music, organised BBQs for the metal community at our de facto clubhouse behind Verellen Amplifiers, and worked hard to nurture creativity and camaraderie in a circle that had grown much larger than a handful of delinquents standing around a boombox in the woods. I also produced a Saturday night radio show on KEXP with the intent of drawing attention to more independent and underground artists within the genre. Naturally, I christened it Seek & Destroy.

Later, I even found moments to enjoy The Black Album. Wherever I May Roam was a fine soundtrack when I left Seattle on a road trip to my new desert home in Tucson, Arizona. Whenever I meet another old-school metal fan, the subject of Cliff always comes up at some juncture and all that geek love bubbles up again. There is nothing romantic about losing a talented artist at such an obscenely young age, but I’m grateful that Cliff’s iconic status is embedded in our hearts because of who he was, what he contributed, and how he transformed metal in ways that will never die.