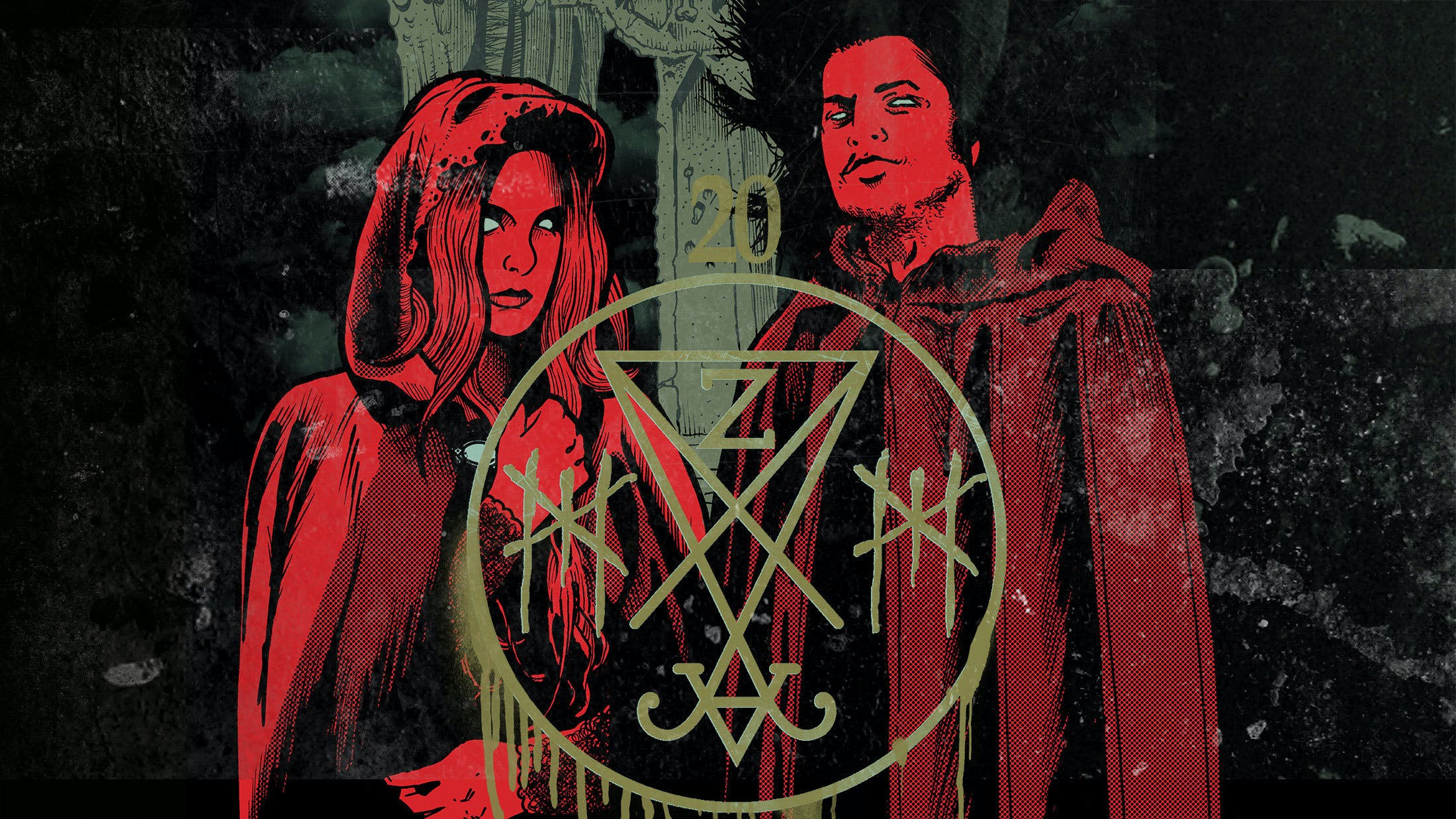 Since its bloody birth in the '80s and its even bloodier defining period in the early ’90s, black metal has been twisted into many weird and wonderful shapes, with numerous artists taking threads of the genre and weaving them through disparate musical forms. There are grand symphonic sweeps and pockets of post-rock introspection, gnarly blackened thrash and bands dabbling with dark electronica.

But few acts from the great black metal diaspora are quite as distinctive and fearlessly inventive as one-person creative outlets Myrkur or Zeal & Ardor. Myrkur, the brainchild of Danish composer Amalie Bruun, mix strains of black metal aggression with folk, classical and ethereal beauty. Zeal & Ardor, meanwhile, emerged from the creative mind of Swiss-American Manuel Gagneux, initially as a sort of jokey genre-splicing challenge set by users who’d frequent the infamous 4chan forums. Essentially, people would propose unlikely combinations of music styles and Manuel would make their wishes a reality, bashing out music on a computer.

On the face of it, a combination of black metal and African-American spirituals probably seemed like one of the more outré suggestions. As he continued to work on it under the guise of Zeal & Ardor, however, Manuel realised he had something special on his hands and that these two seemingly alien strands of music did have some parallels.

“I think they each have to do with being extreme,” he muses. “It’s easy to see the extremity in black metal because of the aggression, but there’s also an uncompromising emotionality in spiritual and gospel music. It came from the dark places of slavery and it was a form of escapism for those people. Making something perversely happy. I guess it’s kind of a fantasy for someone who’s going through something terrible. It’s never just a song that makes you feel kinda sad or kinda happy; it’s always ecstatic or utterly gutted, and that’s something the two genres share.”

If Zeal & Ardor started as a bit of a joke, Manuel’s underlying love and appreciation for black metal came from a very real place.

“I’d been immersed in it since I was 14. I was hanging out with some friends, this guy popped on a Burzum record, and I was immediately entranced,” he nods. “There’s uncompromising aggression, but there are also layers to a lot of black metal. There’s the harsh, abrasive stuff that hits people immediately and probably puts a lot of people off. But there’s also a tender, even beautiful undertone. There are hidden melodies and there’s hidden beauty, I guess, behind all that harsh barrage.”

In the 21st century, black metal has become an international phenomenon. There are bands and fans on every continent, but its spiritual home remains in Scandinavia. Norway was the epicentre of the infamous ‘90s second wave of black metal, but Amalie says she grew up immersed in some of the same cultural and spiritual traditions in her native Denmark.

“I went to this unorthodox school where we were taught Norse mythology. I don’t remember learning much about Christianity, so that awoke my interest in that side of things very early on,” she recalls. “My mom always introduced me to stories and sagas from our part of the world when I was a kid. She talked to me about how cultures and roots shape mentalities in ways we don’t necessarily know, so that’s why it’s a passion of mine to dig even deeper.”

Her own personal introduction to black metal came via the legendary Darkthrone. Specifically their lauded 1994 album Transilvanian Hunger.

“I was surprised. I hadn’t heard anything that sounded that raw and ugly in a way, but also beautiful,” she says, echoing Manuel’s sentiments. “What drew me in was that it reminded me of classical music, which I grew up playing. It was like a different version of something that seemed familiar, even though I’d never heard it before. It’s just so melancholy, it’s almost like a fetish for people who like the dark side of life.”

Both musicians agree that the darkness of black metal acted like a beacon for their younger selves, in particular the church burnings, murders and chaos that is now irrevocably linked to the Norwegian second wave of black metal.

“I don’t think the music was overshadowed by those events, because that’s part of the lure and the mystique. This is modern-day mythology and it’s very important to black metal,” says Amalie.

“At first it was just the sound of it that drew me in, because it has this loudness to it,” Manuel chuckles. “But being an adolescent boy, with the church burnings and all that, it seemed like the coolest thing possible. Teens flock to that stuff, as did I, I’m not gonna lie.”

When Amalie decided to explore her “darker side” with Myrkur, drawing on her black metal roots was the natural way to go. Whereas many black metal acts focus on darkness and evil as an external force, Amalie was more intrigued by the internal workings of herself and other people.

“That’s what interests me more than anything else. On a deeper subconscious level it’s also about what makes human beings evil – or gives them the capacity for evil – and accepting that,” she explains. “As I get older I’m learning not to worship the darkness. All the sides of a human being are important, and you should acknowledge them and learn how to control them, without acting like you’re blind or asleep. You’ll be more whole, more in balance and stronger, so I’m also interested in the other sides, or at least in the darker, evil sides and the way they can actually be used for good.”

The black metal extended universe can be a peculiar place, and not just because of the corpse paint and pervasive aroma of goat. There’s also a strange mix of experimentalism and stylistic conservatism. Some people have very specific ideas of what black metal should and shouldn’t sound like, and for many of these purists both Myrkur and Zeal & Ardor fall very much outside of that remit.

“It’s funny to me. I get interesting Facebook messages, and direct messages from time to time,” Manuel shrugs. “But what’s kind of hypocritical to me is that when it began, black metal was music to break the mould. It was this fringe, uncontrolled, wild thing. Now there are so many rules to adhere to. It’s counterintuitive to the initial spirit of it.”

Is there ever any point in regurgitating the sounds and styles of what has already been done?

“Well, the scene is a very protective, tightknit community,” he considers. “If you take something away from them that’s intrinsically a part of who they are, they’ll be angry. They identify with the music, they want more of it and want more of the same. It’s just not what I’m about. I guess there’s this nostalgic stubbornness to it that I can’t relate to, but I can understand it.”

“I could make a record that would be pleasing to those people,” adds Amalie, “but that’s not interesting to me. Those records have been done. Those years are like a beautiful memory we all can share and worship.”

The elephant in the room is that there are also some unsavoury elements in the underbelly of the black metal scene. Thankfully, these are very much in the minority, and Amalie and Manuel are loathe to pin accusations of misogyny or racism on the wider community.

“For me, any racist elements have been surprisingly absent,” says Manuel. “And honestly, I think the most efficient way to battle that is to appropriate the music, which is what I’m doing.”

Amalie has been open about the abuse she’s faced in the past, but considers it as much of an internet age and societal problem as anything.

“I’ve never met misogyny in real life in metal,” she insists. “I’ve seen it in pop music, so I don’t want to say that it’s a product of this scene.”

So, as two of the rising stars and more adventurous artists orbiting around the black metal world, how do you view the scene now?

“It’s lent itself to evolving into all kinds of cool and inspiring sounds,” adds Amalie. “It’s a testament to how powerful the seeds that were sown back then really were. But old or new, the ones who get it hit your emotions pretty hard.”

While they may plough separate paths, they are united by their differences and ‘getting it’ is something Myrkur and Zeal & Ardor have in common. Because both look to paint over established lines while respectfully drawing on musical tradition, they will continue to redefine black metal in their own unique images.

Myrkur rummages through her record collection to pick the most influential songs in her life – from Prince to The Cure.

Get the folk in: Danish black metal enigma Myrkur explores the quiet side with Folkesange