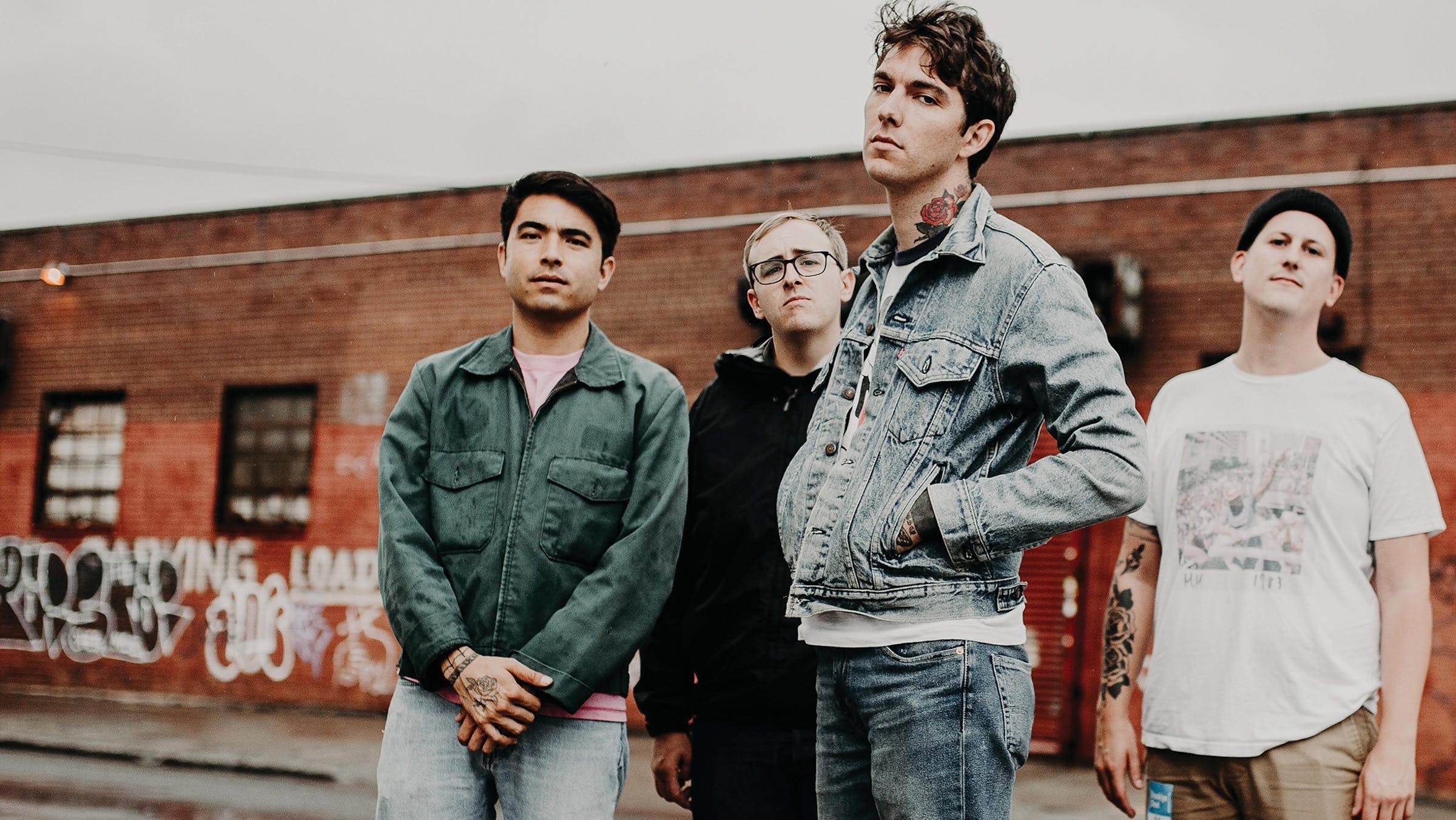 Examining Joyce Manor’s entire discography cannot be done in 40 minutes. It's ironic, considering the band are known for brevity, with most albums idling around the 20-minute mark. However, any Joyce Manor fan knows that length is no testament to emotional density.

The Californian four-piece – frontman Barry Johnson, guitarist Chase Knobbe, bassist Matt Ebert, and the newly-added drummer Pat Ware – have been sending waves through punk and emo since their first eponymous record, especially with the timeless hit that they’re specifically known for, Constant Headache. Alongside bands like Tigers Jaw, Title Fight, and The Hotelier, they have become a vital part of the emo revival movement.

But how did their discography end up materialising? Barry explains…

“Self-Titled felt kind of like a best of,” Barry reflects. “It wasn’t like those were all songs from the previous year. It was songs from many years.”

Joyce Manor was not Barry’s first gig -- far from it. Having played in a few bands before, Self-Titled was the product of Barry sorting through batches of his songs, pushing aside trite ones, and refining those few with potential. Beach Community, a one minute and 40 second flash of severe loneliness (“What can you do when you’re not getting sober? / It’s hard to admit but you’re always feeling alone”), is one of the band's biggest fan-favorites, and was released when Barry was 24 years old, but written when he was just 18.

Although they gravitated toward folk punk after playing a gig with AJJ, Joyce Manor slowly adapted to emo, especially after performing alongside a local band called Summer Vacation whose music reminisced on American Football and Cap’n Jazz. So, Barry made a few adjustments to the songs on Self-Titled, transforming folk punk ballads into heavier anthems, and Joyce Manor was born.

“That ended up being what people think of when they think of Joyce Manor," says Barry, "an emo revival band."

After being approached by Asian Man Records – a San Jose label that the guys had grown up looking up to – Joyce Manor feverishly rushed into the studio to get an album out.

“I was really eager for acceptance by this label that I deemed to be cool,” Barry confesses, shaking his head at his younger self. Overzealous, the goal was not to make a good record, but to make a record. The result? The sophomore effort Of All Things I Will Soon Grow Tired, a record that Barry harbors resentment toward despite how many fans cherish it.

“I just do not know what I’m doing,” the frontman admits. “I’m being pulled in all kinds of different directions. It sounds like I’m having an identity crisis on that record, and I was.” With a smirk, he adds, “I think we could’ve used a psychologist there to help us through that.”

Even so, the record is packed with an array of visceral moments, from the soft expression of innocent love in the lo-fi Drainage to the electrified portrayal of messy adolescence in If I Needed You There. Last minute, the band decided to make the record better by making it weirder. With producer Jack Shirley telling them that it was impossible to get all of it done in time, they hurried to fit in eccentric bits and pieces.

“It was like we took a bad record, tore it up, and glued it together with demos and stuff,” Barry says, comparing it to a collage. “I don’t hate it, but I just think it sounds like a confused guy, because it was made by a confused guy."

On a mission for redemption, Joyce Manor wanted to do something different. “I think it was just trying to outrun boredom,” Barry contemplates. He started writing, but things really kicked off when Chase came home from Santa Cruz, where he was dating a girl who attended school there. “While she was in school all day, he would just smoke weed and play guitar. And he got way better at guitar by doing that.”

After the two combined each other’s ideas – Chase’s guitar parts over Barry’s songs – the guys knew something big was in the midst. Gradually, a classic emo-punk gem came into fruition, pushing Joyce Manor into the limelight. Never Hungover Again received positive reviews from publications like The A.V. Club, Pitchfork, and so on. It was the beginning of an era where emo was not only accepted, but perceived as kind of cool again.

The goal of redemption had not only been reached, but exceeded. Joyce Manor crystallized into a well-respected group that tread between genres, creating art that can’t be particularly categorized. More than anything, they embodied a feeling: intense but youthful, reckless but thoughtful.

“There was just a void of good indie rock songwriting that’s also kind of intense,” considers Barry. “So, we became popular in that circle, and that kind of rejuvenated our career right when we needed it.”

Dealing with the pressure to follow up Never Hungover Again and the need to fire their drummer, Barry considered breaking up Joyce Manor and starting a new band under the name Cody. A few gigs were played with the alias ‘The Snowcones’, but it wasn’t until Barry met up with Epitaph owner Brett Gurewitz for lunch that Joyce Manor came back to life.

“I thought he was just being friendly," muses Barry. "He’s a friendly guy; we’re friends. Then, we sat down and he was like, ‘When are you gonna record?’ And I was like, ‘Dude, I don’t have any fuckin’ songs.’” Brett urged him to book studio time, and Barry gave in, especially after Brett mentioned that Rob Schnapf, who’s worked with Elliott Smith and Beck, was interested in producing a record with them. “I had a crazy creative burst that was brought on by that – the eagerness to record with someone like Rob Schnapf.”

Songs like Over Before It Began, Make Me Dumb, and This Song Is A Mess And So Am I sprouted from his fingertips in the timespan of one day. The jump from Never Hungover Again to Cody didn’t possess the same fiery essence of the leap from Of All Things to Never Hungover Again, but it encompassed growth and maturity. The songs weren’t just good – they were richer. The acoustic Do You Really Want To Not Get Better? proved that Joyce Manor didn't need crazy guitar riffs and shouted vocals to express themselves in a way that felt refreshing.

“The lyrics came really naturally," says Barry. "The melodies were captivating, the chords were interesting.”

“…I’m kind of over it again,” Barry grouses about his state post-Cody. “I’m like, ‘We did four records. I like them all, more or less for different reasons. This seems like a good amount of records, and I’m done with it.’”

Joining forces with Rory Phillips, the vocalist and guitarist of ska-punk band The Impossibles, Barry skeptically emailed him vocals with acoustic guitar. “I was like, ‘That’s weird. I don’t even know this guy. We never met. Like, how are you gonna make music through email?’” However, a month later, Rory sent the song back, and the product was the final version of Silly Games.

“I was like, 'Whoa, this legitimately sounds like The Beatles,’” says Barry. The song went on to be one of the highlights of the record. He continued to bounce ideas off Rory, and Friends We Met Online and Wildflowers were the products. Originally, the frontman considered these to be his solo songs, but, soon enough, the band got together and conceived the rest of the album. “It was kind of thrown together. It was some leftovers from Cody, it was some stuff I was doing with this guy from Texas through e-mail.”

The album was set for release when Barry almost cancelled it. It was the birth of the last track, Wildflowers, that stopped him and salvaged the whole process.

“Wildflowers is probably one of the best songs I’ve ever written,” he says of the track, a perfect ending to the conflicted record. Ultimately, Barry's dissatisfaction with the band's work is one of the elements that draws fans to Joyce Manor: a perspective layered in an instinctive darkness. You can have nihilism without Joyce Manor, but you can’t have Joyce Manor without nihilism.

These Californian emo upstarts aren't even sure they want to tour with themselves.

Joyce Manor And Saves The Day Are Uniting Emo Generations

On their U.S. tour, Saves The Day and Joyce Manor are bringing out longtime fans and making new ones by appealing to flip sides of the same genre.