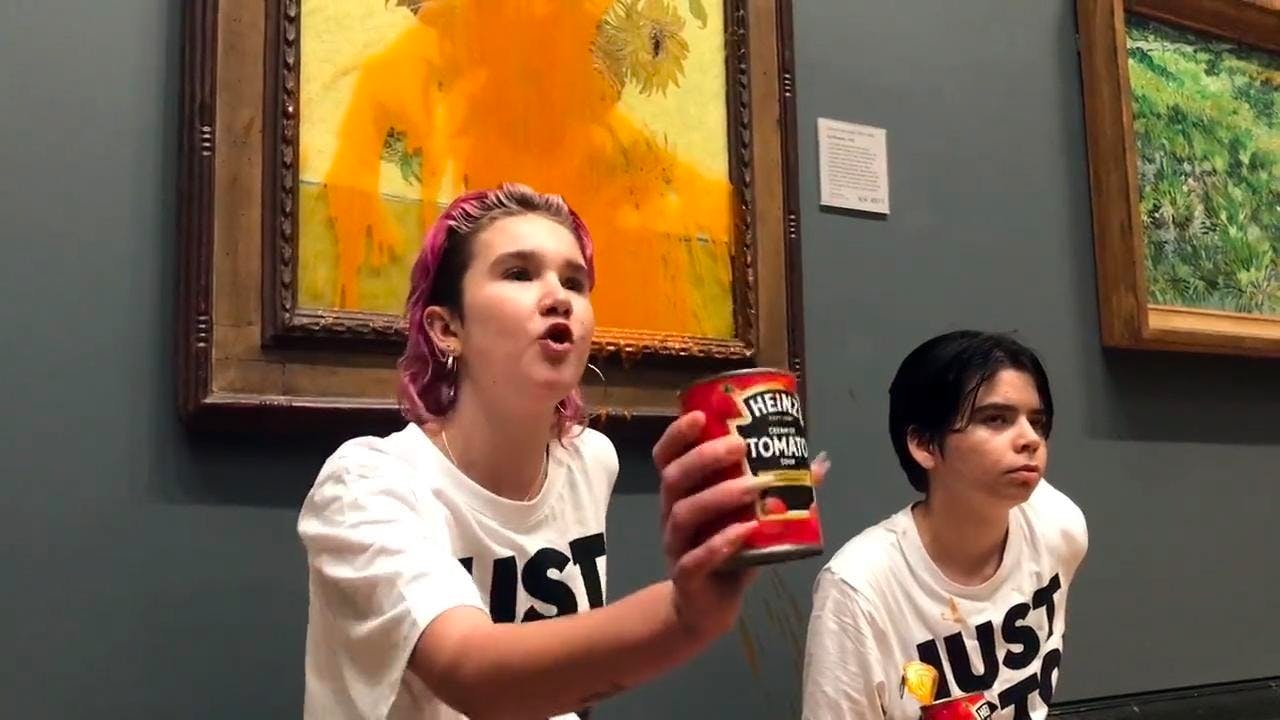 Just Stop Oil activists recently made global headlines when they threw soup over a famous Van Gogh painting. The Heinz hurling event sparked a bizarre debate on whether soup-throwing in art galleries is wrong or not, but when it comes to direct action, such debates are redundant. Ultimately, Just Stop Oil took an action that’s impossible to ignore in order to draw public attention to an issue that’s also impossible to ignore: climate breakdown. And it worked.

Direct action like this is designed to be disruptive, and it’s something that people do when they’re desperate to be heard. Whether it’s glueing yourself to the road to demand the government insulate people’s homes, throwing paint over an arms factory, or setting off 1,000 rape alarms outside a police station to protest institutional misogyny, direct action is often the only way to force an important issue into the spotlight.

Time and time again, direct action works: it pushes a public conversation to the forefront that simply wouldn’t be taking place otherwise. When it’s targeted directly at the source of the problem, it forces material change. After six years of direct action, climate justice group Liberate Tate forced the Tate art gallery to stop receiving funding from oil companies.

If Liberate Tate activists had chosen to instead write polite letters to their MPs, they’d have gotten nowhere. This is because our traditional political systems don’t move with any sense of urgency – and trying to convince the government to do the right thing often feels like screaming into the wind. Remember: over one million people peacefully marched against the Iraq War.

This year, Palestine Action (above) successfully managed to shut down the UK headquarters of Elbit, an arms company that supplies equipment to the Israeli military. Through direct action, Palestine Action achieved what official Amnesty International reports recommending the end of weapons sales to Israel could never: after all, reports are pieces of paper with no guaranteed consequences. Breaking a window or throwing paint, on the other hand, has an immediate impact.

Any potential damage done through direct action is nothing compared to the large-scale damage that it's designed to interrupt. The conversation around direct action is often a “condone or condemn” debate on the tactics used. This is a red herring. Arguing about whether a protester was “right” is ludicrous when what they’re protesting is objectively wrong. Assessing the ethics of protesters throwing soup or paint, instead of the ethics of Israeli military killing Palestinian children, or the devastating death toll of floods in Pakistan, is a wilful deflection from what’s actually important.

As the crises we’re facing become more life-threatening, our response must also be urgent. This is why increasing numbers of people are coming together to take direct action – it’s a way to take back your power and challenge the government. Climate change is an international emergency: if the doors of power won’t open when we knock, we must break them down with an axe.

Yet, the government doesn’t like to be challenged. This is precisely why it’s trying to stop people taking direct action. The Public Order Bill contains chilling new criminal punishments for protesting: for example, if you lock or glue yourself to another person as part of a protest (like the Stansted 15 did when they laid down on a runway to stop a deportation flight taking off), you could be sentenced to up to 51 weeks prison.

This is why the “condone or condemn” debate on tactics is dangerous. It plays into the hands of a government keen to position people taking action on social injustice as the public enemy. This distracts us from the fact that the real public enemy right now is the government itself. Debating the Public Order Bill in parliament, Minister for Policing Jeremy Quin called climate protesters a “selfish minority”. I’d argue there’s no more selfish minority in the UK than the 276 politicians who voted for laws that block a population of 67 million people from taking action on the most important issues of our lifetime.

Protest is legal and vital and a human right. As the crises around us intensify, direct action is increasingly becoming a necessity. While there may be new legal risks that challenge us to be more creative, we cannot be deterred from doing what needs to be done. Thankfully, legal support from Green & Black Cross and Black Protest Legal Support is available for people planning to take direct action.

Just Stop Oil appear unstoppable: they say only the death sentence would deter them from taking action. Since the soup-throwing, their sustained campaign of resistance against the UK government issuing new oil and gas licences has since included blocking the Dartford crossing and covering a King Charles waxwork in cake.

Instead of criticising and condemning people taking direct action, we should celebrate their courage. Choosing to risk criminal punishment in order to fight for a better world is, by anyone’s measure, a phenomenally selfless act.

4 questions to help you plan a direct action

Issue
What specific issue are you going to tackle?

Target
Who is at the heart of this issue, who holds the power to change it?

Tactic
What is the tactic that you are going to use to disrupt the status quo and get attention? How will your tactic communicate your message?

Hook
Is there an event or date that you could base your action around, to help secure media coverage?