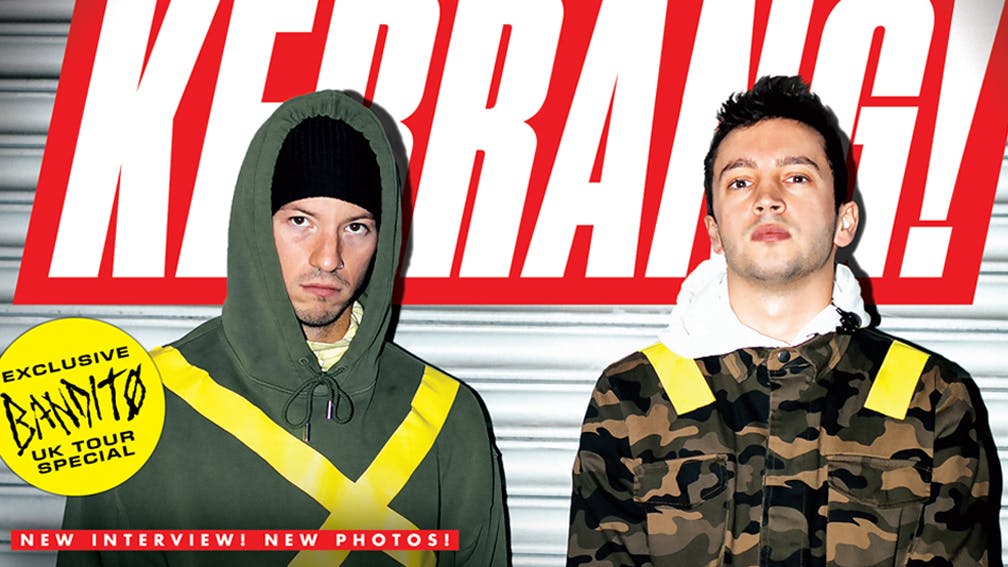 Theirs is a movement like no other – even if Josh Dun and Tyler Joseph are still trying to come to terms with it. With twenty one pilots bringing the UK to a standstill, Kerrang! jumped aboard the Bandito Tour bandwagon to find two men gripping the reins more tightly than ever…

Plus, whether or not you were lucky enough to witness the UK leg of the worldwide Bandito Tour, get behind twenty one pilots’ return to the Kerrang! cover with an awesome art print that’s just for you, you lucky devil.

Elsewhere in the mag this week: with the very real threat of fascism on the rise across the globe, we meet a righteous band of new black metal artists uniting to do something about it. On top of that, Scarlxrd looks set to go stratospheric with his new album Infinity, Simple Creatures kick things up a gear with their debut EP and live shows, and Mötley Crüe's Nikki Sixx faces up to a lifetime of wildness in the K! Interview.

In the reviews section, meanwhile, Welsh post-hardcore crew Holding Absence introduce themselves brilliantly on their stunning debut, and the 'truth and lies' of Norwegian black metal get told in Lords Of Chaos. On the live front, Mike Shinoda holds nothing back at his K!-sponsored debut UK headline show, SWMRS crank up the heat in Glasgow, and Blood Youth shed their old skin and show their new twisted evolution.

There are posters of Venom Prison, Baroness, I Prevail, Frank Iero, While She Sleeps and Alexisonfire, too!

All this and more is available in the new issue of Kerrang! – which you can get anywhere in the world when you order online through Newsstand. But for UK residents, it hits the shops son Wednesday, March 20 from all good newsagents.