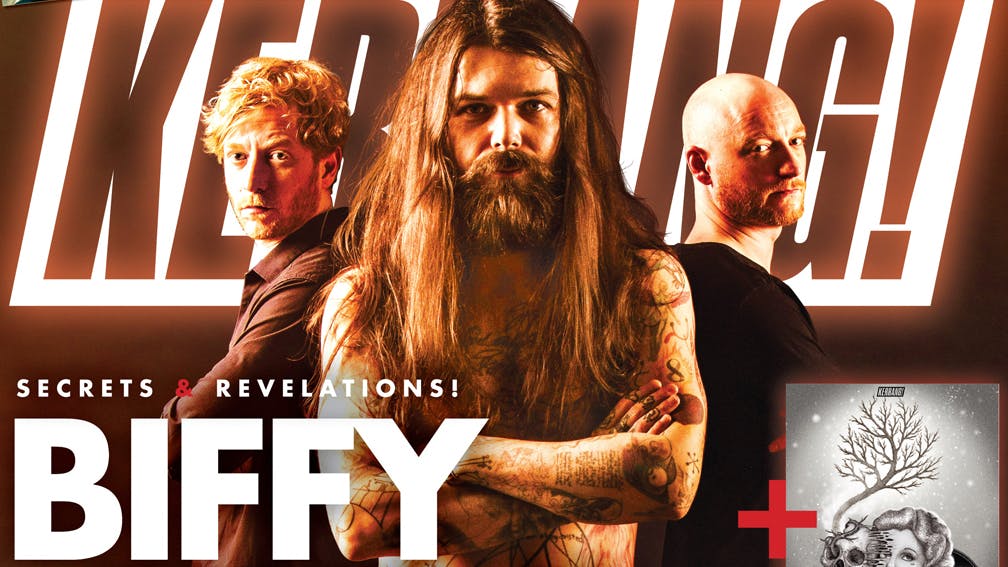 The mark of a great song is how it sounds when you strip it to its bare elements. For Biffy Clyro, this has never been a problem. As they prepare to release their MTV Unplugged live album, Simon Neil, James Johnston and Ben Johnston shine a light on the stories behind 11 of the songs they turned off the amps for…

You're also going to need to clear some wall space for a brand-new Biffy art print, courtesy of Paul Jackson – see Pjackson.bigcartel.com for more of his amazing work.

Elsewhere in the mag this week, Jonathan Davis of Korn gets very sweary as he reflects on his extraordinary career, Ghost take us inside their sinister, Black Death-themed new Prequelle album, and we meet the super-chilled Bonnie Fraser, who, despite fronting pop-punk's brightest hopes Stand Atlantic, is bricking it deep down…

On top of that, Against The Current unveil their next era, we remember the late, great Chris Cornell, Nergal of Behemoth rants about why rock has become too safe, Tonight Alive's Jenna McDougall lifts the lid on her colourful soundtrack, and we hit the road with Machine Head.

In the reviews section, Five Finger Death Punch dust themselves down and continue on their belligerent course with their punchy seventh album, while Turnstile host the largest basement show of all time, Black Peaks give a sneak peek of what's to come as they level St Albans, and Queen Kwong bring their beautiful electro-rock to the capital.

We've got five classic posters for you this week, too, featuring Limp Bizkit, blink-182, Slipknot, My Chemical Romance and Green Day!

The new issue of Kerrang! is available anywhere in the world when you order online through Newsstand. But for UK residents, it hits the shops on Wednesday, May 16 from all good newsagents.

Against The Current share new single and video, Wildfire

Against The Current have teamed up with League Of Legends European Championship casters Andrew ‘Vedius’ Day and Daniel ‘Drakos’ on their new single, Wildfire.

K!1736: Bring Me The Horizon – The World-Exclusive Comeback Interview

PLUS! Alkaline Trio, Clutch, Against The Current, Papa Roach, Fall Out Boy, NOTHING, Alice In Chains, Panic! At The Disco, Warped Tour, THE FEVER 333, Bloodstock Festival and LOADS more!

Watch Against The Current's New Video For Almost Forgot

No, we're not crying – you're crying.

Watch Against The Current's New Video For Strangers Again