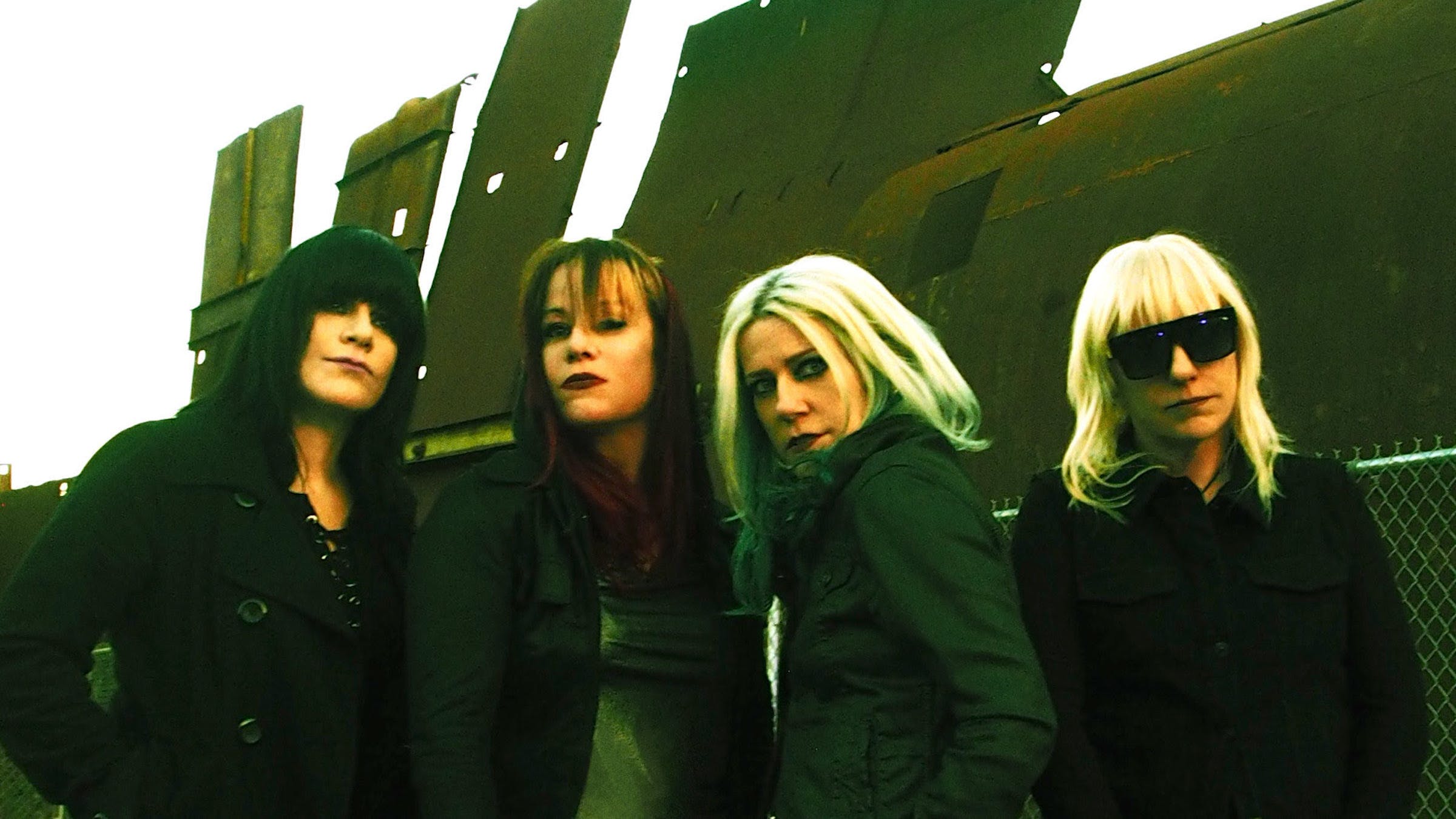 A new L7 record in 2019 might spark déjà vu for those who were around when the Los Angeles four-piece invaded the mainstream 27 years ago. For one, Scatter the Rats—the band’s new album, and first since 1999’s criminally overlooked Slap-Happy—has all the piss, fire, riffs, and melodies L7 wielded before they quietly vanished for a decade and a half.

Their return is also a sobering reminder of the patriarchal underpinnings America still cozily rests on. When L7 vocalist/guitarist Donita Sparks sings, “Turn the tables with our unity / They’re neither moral nor majority” on their best-known song Pretend We’re Dead, it still punches with the same force it did when the video hit MTV during George Bush Sr.’s lone term.

But there’s hope. Gender roles continue to be challenged. The presidential field is more diverse than it’s ever been. And 2019 already includes fantastic new records from Ex Hex and Jenny Lewis. Formidable and influential feminist punks Bikini Kill and Team Dresch are also playing their first shows in years—not out of nostalgia, but out of necessity.

“I’m happy with all the pendulum-swinging craziness—stir some shit up,” says guitarist/vocalist, Suzi Gardner, who founded L7 with Sparks back in 1985—years before “grunge” became a household word, and the biggest bands in L.A. at the time were RATT and Mötley Crüe. “I think that’s what we were doing—breaking stereotypes. And, to use the British term, taking the piss out of it all. We weren’t the only ones. We’re just part of that group of folks breaking some rules.”

L7 took on social norms and the rock ’n’ roll boys club by fearlessly infiltrating the goddamn mess. They didn’t dress pretty. They played low-slung Flying Vs. They were loud, sometimes crude, and their sharp tongues were always in their cheeks. It also wasn’t unusual for L7 to blow their male counterparts off the stage. They didn’t seem to overthink, or intellectualize things -- they just did it. Until they didn’t anymore.

The fact that the members of L7 -- Sparks, Gardner, drummer Dee Plakas and bassist/vocalist Jennifer Finch -- got back together, let alone just made a new record, is more a testament to the band’s importance than anything else. It was essentially their fans that pleaded for L7’s return in 2015 via the band’s Facebook page, which Sparks started as a way to archive photos and videos that would ultimately wind up in 2016’s excellent documentary L7: Pretend We’re Dead (funded by fans through a Kickstarter campaign).

Above: Photo by Mary Scanlon

With the demand there, the idea of playing shows was kicked around, although the members hadn’t spoken to one another in years. Sparks had the difficult task of reaching out to her estranged bandmates.

“When I got the phone call from Donita asking if I wanted to do some shows, in slow motion I heard myself ask, ‘Would you replace me?’” Gardner recalls. “And simultaneously I was thinking to myself, ‘If I don’t try to do this I will hate myself for the rest of my days on this planet.’ I know it’s really dramatic, but it was heavy like that.”

Gardner hadn’t touched her a red and green 1967 Gibson Melody Maker -- purchased at Freedom Guitar on the Sunset Strip when the band started -- in over a decade. In fact, it was under her bed gathering spider webs.

“It was a little bit of a bad divorce,” Gardner says of L7’s unceremonious split in 2001. “And when you bail on something that you’ve given your heart to for all those years…I mean, you hate yourself. And you think to yourself, ‘I can’t even look at this. I wanted to just shut it out. And I basically did for 15 years -- to the point where I didn’t even want to talk about it.”

Finch and Sparks continued to play music post-L7. Finch left the band in 1996 to form The Shocker, and Sparks released a solo record in 2008 called Transmiticate. It was a difficult time for Sparks, who captured her discontent on Holding Pattern, one of the standout tracks on Scatter The Rats, and probably the most personal song she’s written.

“As a writer I’m emotionally guarded,” admits Sparks. “Suzi is not—she’s more of an open book with her emotions. I’m more of a cultural commentator kind of writer. But Holding Pattern is just really what I was feeling at the time. I wrote that years ago when the band was broken up. I was in a dark place. I was trying to get my solo career off the ground, which was not happening. I felt a loss of identity, and I was really fucking stuck and depressed. I [brought in] Holding Pattern because it had a sentiment that had some weight.”

Scatter The Rats itself feels a little more vulnerable than anything the band has done; perhaps the passage of time readied the members of L7 to really open up.

Gardner’s Cool About Easy is a personal mantra of sorts—something she picked up while working as a cocktail waitress at the Troubadour in the early ’80s. She recalls Kenneth Sonny Donato—an L.A. scenester, who bartended there at the time, and went on to author the book A Poet’s Guide to the Bars—lobbing the term at her more than a few times.

“I’m sure I was having some difficulty, like W.A.S.P. throwing meat around the club while I’ve got 12 Greyhounds on my tray,” says Gardner with a laugh. “And Sonny said to me, ‘Suzi…what’s so cool about easy?’ I would forget that phrase for 10 years at a time, but maybe be faced with some bullshit in life and remember it.”

Scatter The Rats is an L7 record through and through—absolutely ripping, snotty, heavy, and always a good time. Proto Prototype and Fighting the Crave are filthy and frolicking heavy metal songs, while Garbage Truck and new single Stadium West tap L7’s love for ’70s New York punk. It sounds like no time has passed, and also cements Sparks and Gardner as the songwriters they were becoming on 1996’s The Beauty Process: Triple Platinum and 1999’s Slap-Happy. L7 was hitting their stride just as alternative nation began crumbling around them.

“The Beauty Process got really good reviews, and then we got dropped from our label,” Sparks recalls. “That was a big disappointment because Suzi and I were so proud of that album. That was right after Jennifer had quit the band, and we had to really fight to stay together. Some of us were having some substance abuse issues. It was really tough just to get through that record, and we thought it was an artistic achievement for us.”

The Beauty Process and Slap-Happy were a little weirder, a little poppier, and far more dynamic than the band’s previous records. Sparks and Gardner were gaining confidence as songwriters.

“When we first started, we felt like we had to be these tough cookies—and part of that for me was an absence of melody or backing vocals,” says Sparks. “It was more, ‘Let’s try and be like a slower Motörhead.’ I love Motörhead, but I’m really a person that’s into ’60s pop. I love bubblegum. I love the Beatles. By the time we got to The Beauty Process, I had more courage to be more melodic. And so did Suzi. We felt we proved ourselves time and again as a rock band, and we could open those doors to more vulnerability and more melody.”

There’s absolutely no reason L7 shouldn’t be mentioned in the same breath as their contemporaries Mudhoney or the Melvins, bands that have the right measure of humor, artiness, and pure rock power. Scatter The Rats is all of that. And, as with their last couple of records, the band isn’t afraid of a little spit shine on the new songs.

“We didn’t just go punk rock-rock style, let’s just play for three days straight, and that’s it,” says Sparks. “I like studio production. I like candy, I like production candy.”

There are all kinds of weird harmonies and sonic touches scattered throughout the new record. And in true L7 fashion, the new material defies easy categorization. “With this album we can play metal festivals, we can play punk rock festivals, and we can play alternative rock festivals,” says Sparks with a laugh. “Take your pick, ’cause we’ve got it all. And that’s kind of what we’ve always been.”

It’s the sort of thing that over the years has routinely put L7 on shows with such a diverse lot: Bad Religion (one of their first shows, to about six people), Nirvana, Nick Cave and the Bad Seeds, Babes In Toyland, Helmet, Melvins, Faith No More, the Beastie Boys, Ministry. Last year they played the massive Heaven & Hell festival in Mexico City with the heaviest of heavies Judas Priest, Megadeth and Watain. Not to mention L7’s own Rock For Choice, a series of pro-choice benefit shows the band started back in 1991 that featured artists like Bikini Kill, Fugazi, Salt-N-Peppa, and Joan Jett.

L7’s relationship with Jett goes back years, so it’s only fitting that Scatter The Rats is being released on Jett’s own Blackheart Records. The label quickly swooped up L7 after hearing about the band’s woes with a PledgeMusic campaign that left the band out thousands of dollars (the Dandy Warhols and other artists claimed similar issues with the crowd-funding platform). “It did not go well,” Sparks says, adding with typical sarcasm: “Other than that I don’t really want to elaborate at this time, because there may be lawyers, guns and money coming their way.”

Fortunately the record got made, and L7 will tour the hell out of it this summer. Making Scatter The Rats was wracked with time constraints, pressure, as well as a bit of trepidation on the part of the members. Making a new record together wasn’t initially part of the plan.

For Gardner, bringing in new songs was as stressful as it was the day she handed Sparks a tape with her early demos when the two connected more than three decades ago in L.A.’s ramshackle Echo Park art-punk scene. “I remember just being terrified bringing the tape to her,” says Gardner. “I had a cassette with some songs on it, and I was really terrified that she’d laugh at me. It was really scary for me…I mean it’s scary to bring in a new song now. But it worked out.”

It certainly did. And now L7 has a second chance to retake the narrative, something the members feel was getting snatched away while they were away from the band.

“We were going into the veritable circular file of rock ’n’ roll history,” Gardner explains. “Which is a drag, because we really hammered at it for 15 years. But you know what? No expectations. Honestly. I think my only expectations for L7…I thought maybe we’d do a couple regional tours, and get in a fight, and break up. But look at what we did. And we’re just nutty enough to keep going.”

Stop what you're doing, L7 are back with new music!