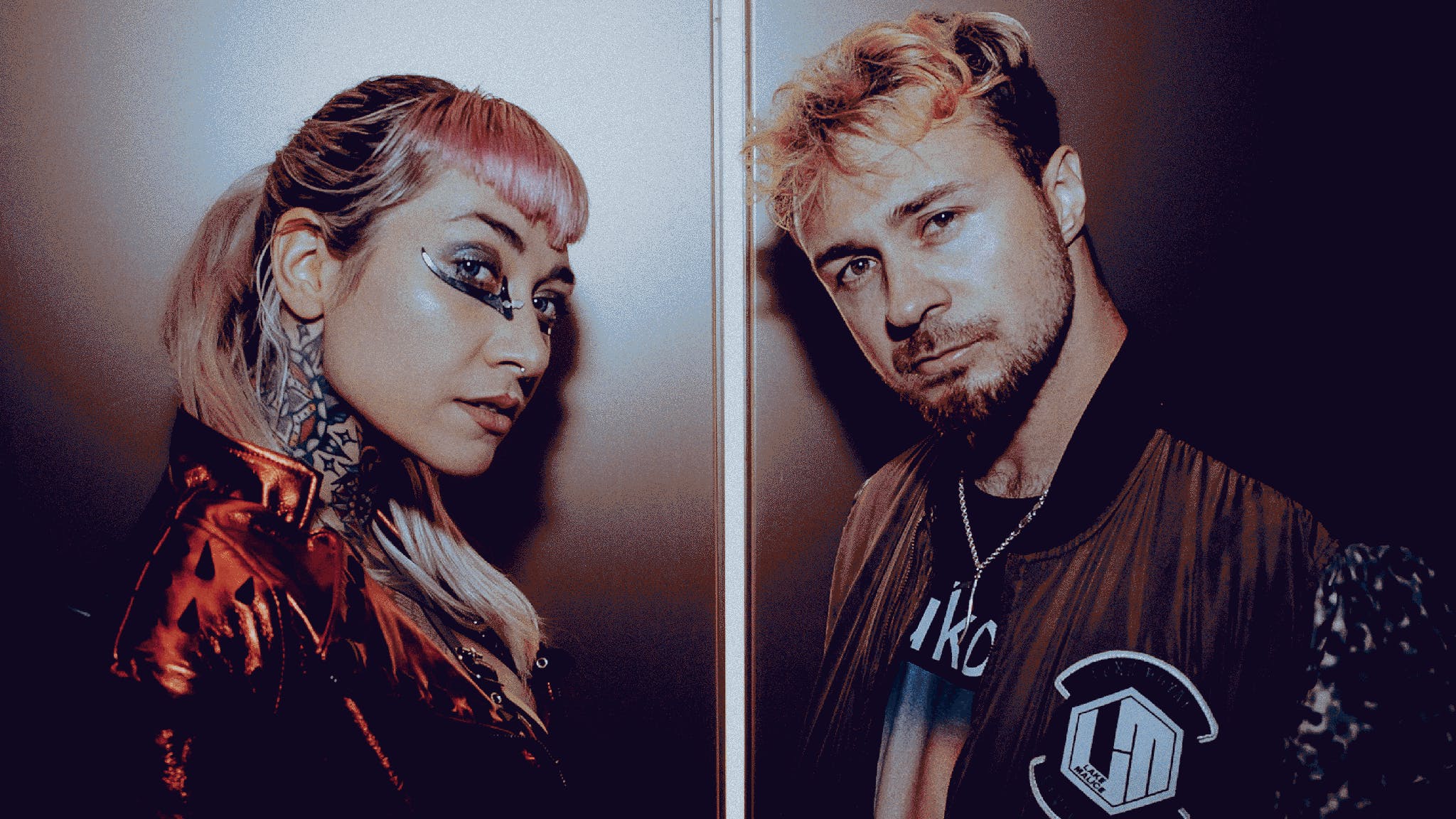 As opening sequences go, it’s pretty memorable. A young bride screams on the cold floor of a church, her face and dress besmirched with black blood. This is the start of the video for Black Turbine, the newest song from Brighton-based duo Lake Malice.

The ‘bride’ is actually Italian-born Alice Guala, who in partnership with multi-talented guitarist and composer Blake Cornwall, fronts the most exciting new alt.metal band in Britain. Even ignoring the astonishing visuals, Black Turbine is a song that hits hard. It gushes waves of dark electronics, building tension to breaking point before clobbering you with a clean hook so cathartic that you’ll wear out your mouse clicking ‘repeat’. When a band you’ve never heard of, an act so new that they’re yet to play a hometown gig, releases a song that can only be likened to Spiritbox, it’s probably wise to take notice.

On the strength of just four songs – each with increasingly striking videos – they’ve been recruited for next year’s Download and have already played dates around the country supporting Hacktivist, InVisions, Zeal & Ardor and Bloodywood. So far, it’s been a rocket-fast rise, for which the duo feel “humbled” and “incredibly lucky”.

Blake – like Alice, charming and modest – says: “There’s part of me that thinks: ‘Do we deserve this yet?’ Then again, I’ve sacrificed a lot over the years; turned down opportunities in developing a life and a career, because for some crazy reason I’ve decided to do music instead.”

That turning point came during the dark depths of lockdown, when he found Alice (pronounced ‘Alee-ch-ay’) on Facebook and realised they shared a singular vision – so much so that they decided not to recruit other band members other than for live work. Incredibly, their first two songs – Blossom and Creepers – were written before the duo had even met. Alice had earned a reputation for her online vocal covers – her take on Bring Me The Horizon and YUNGBLUD’s Obey is definitely worth a look – while Blake had become disheartened by working with others who preferred formula over fun.

“Blake and I had both been in projects where there were too many people trying to get points across,” Alice recalls, “whereas it was obvious from the start that we two were on the same page, sharing a vision. It’s easier for us to keep the songwriting between us. The live experience is of course quite different and we’ve already learned so much – but our actual music is a melting pot!”

“That’s a good way of putting it,” nods Blake. “Whereas Alice likes some hyperpop, I come from a much heavier background, but my peer group seemed to be quite close-minded. It almost seemed that I wasn’t ‘allowed’ to listen to stuff that wasn’t heavy, or was different. I wanted to do something that was less conventional. There were quite a few artists that Alice and I had in common, such as VUKOVI and WARGASM, plus we both loved older stuff like Linkin Park and Bring Me The Horizon.”

With pandemic restrictions relaxing, Alice and Blake finally met up at a pub in Brighton. “We got along straight away,” the singer smiles. “I remember laughing a lot because Blake’s so easy-going and down to earth. I already knew we’d be friends because of the way we wrote messages to each other – that’s such a millennial thing to say, isn’t it?”

From there it was simply a case of honing their art, ideas both aural and visual. Video director Shaun Hodson of Loki Films helped cement the latter. They’ve collaborated on the themes, with Shaun fleshing out the concepts – the video for third song Magic Square tied in with the band’s love of horror; the track also offered a brief diversion from the more serious topics at the heart of their music.

“Music is the best possible therapy besides going to therapy itself,” Alice considers. “I’ve spent most of my life in Italy, and my personal opinion is that there’s a difference there in how women are treated. I know abusive relationships exist in the UK too, but my experience of Italian culture is that there is way more sexism, and it’s spread across many situations. In previous projects I’ve done, someone else was doing most of the writing, so now it feels like I’ve got all these things to say, about everything from mental health to religion, based on my entire experience as a human being.”

Taking some inspiration from Canadian dance-pop star Grimes, Lake Malice are keen to develop their live show into something that’s as entrancing as it can be, given certain constraints as a new band. “If we had the same kind of budget as Grimes we’d probably have a giant mecca-robot stalking the stage,” laughs Blake. They’re also grounded enough to know that they need more support slots before they consider headlining, let alone that tantalising slot at Download next summer. Rather sweetly, in fact, they don’t fully realise how good they already are.

“I’m so hard on myself when I’m writing songs,” Blake quietly rues. “I second-guess and question myself constantly.” (“He’s great at songwriting; great!” Alice instantly chimes.) “Even if it’s just a three-minute song I want it to be a rollercoaster, I want it to take you somewhere. I want it to do interesting things, not just verse-chorus-verse-chorus. At the same time you’ve got to consider whether it’s still fun to listen to. I find the process hard, but it’s definitely worth it.”

Next up for this musically thrilling and ferociously fast-rising outfit will be more soon-to-be-announced support tours, and either a debut EP or mixtape. The prospect of headline shows makes the sometimes self-effacing duo exchange looks of intermingled trepidation and excitement.

“The songs are there and we’re looking for someone to work with on those, and also to put visuals together because we’re passionate about that,” says Alice. “Our aim is to get people to go wild and enjoy their experience. We met lots of people on tour who told us this was their first post-lockdown show. Going out again is a big deal for people and you want to do your best to engage with them.”

For all their modesty and talk of ‘imposter syndrome’, another look at Black Turbine confirms that it’d take something as serious as a second pandemic to stop Lake Malice in 2023. For a young UK-raised band, it’s as exciting as it possibly could be. And it’s only just begun.

Black Turbine is out now. Lake Malice play a sold-out show with WARGASM at Bournemouth Bear Cave on December 7