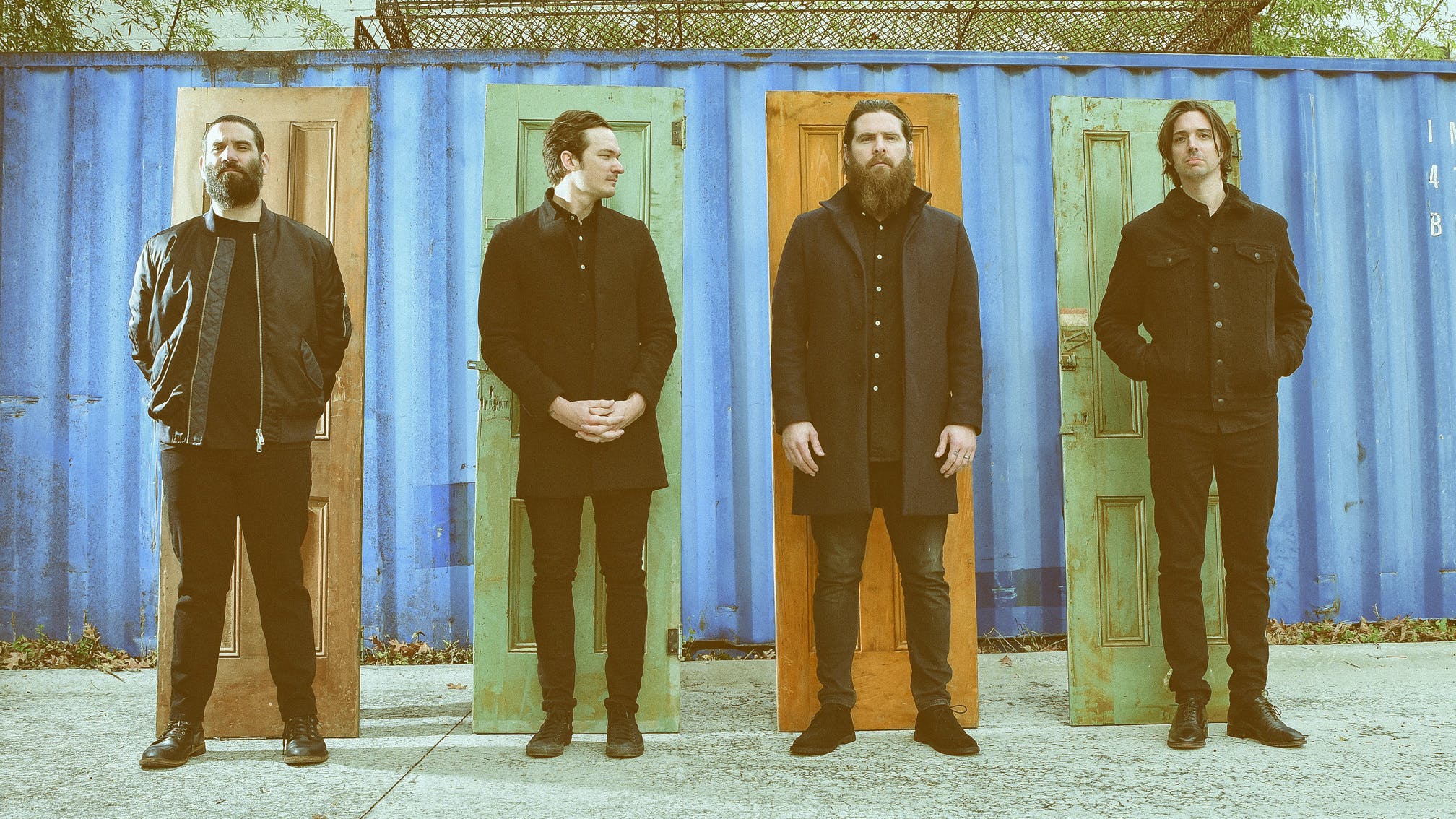 In 1900, The Wild Knight & Other Poems, an early collection of poetry by English philosopher and essayist GK Chesterton, was published. One of the poems found within its pages is a simple four verse rumination on getting older called Gold Leaves, which details the shifting nature of the protagonist’s idea of what God is, as well as how his search for Him has changed over the years. It’s a poem that, more than a century later, Andy Hull accidentally stumbled across in a journal of old prayers and poems. The Manchester Orchestra frontman – who founded the Atlanta-based band in 2004 when he was 17 – was struck by the entire poem, but especially the last line of the third stanza, which talks about “The million masks of God”.

It’s after that phrase the band’s sixth studio album is named, and very aptly at that. Like the five records that preceded it, The Million Masks Of God is an exploration of faith, self and existence, a search for the meaning of life and, to some extent, like the poem, God. It’s a title, Andy explains over Zoom from his home in Atlanta, that also helps to shine light on his ever-changing relationship and struggles with his own faith.

“The poem is about trying to find God when you’re young,” he says. “It’s this idea of, ‘I’m young and I’m trying to find God everywhere, but I can’t see it and it’s making me angry because the more and more I look, the less and less I find.’ But then it says, ’Behold! The million masks of God’, and the idea that it’s in every blade of grass, it’s in every leaf, it’s in every face you see – that’s God. And that’s an encouraging concept.”

“As a teenager,” adds Robert McDowell, who joined the band in 2005 and is, together with Andy, its main creative force, “you want to ask, ‘Why? Why? Why?’ on everything. But as life goes on, you realise that certain things happen without any explanation or reason. So then you have to follow certain feelings internally – I ask why, but sometimes I don’t need to know the answer. I just need to take the breath and have faith. Nine out of 10 times, there’s peace in that.”

“I think,” offers Andy, “that this is the first time that I’ve used, not religion in any sense, but the idea of faith and God in a positive, helpful way. There’s a hopeful idea that when you die there’s this total removal of all the guilt and all the shit that’s on your shoulders that you’re carrying your whole life. I loved the idea because in my own life I was actively trying to better myself – and I stopped months ago!”

“No, I’m still trying to be a better person,” he continues more seriously. “It’s about letting go of the person that you were that you cringe about in the shower sometimes – so this idea of God and forgiveness was really beautiful to me, and as I was actively trying to embrace those things, it was making its way into the writing.”

Initially, the concept of The Million Masks Of God was a fictional one, charting one man’s encounter with the Angel Of Death and the journey they take together through all the different moments – good and bad, sad and happy – of his life. It’s not the first time that the band (currently completed by drummer Tim Very and bassist Andy Prince) have confronted such a heavy, solemn topic. In fact, their 2006 debut album, I’m Like A Virgin Losing A Child, includes Sleeper 1972, an incredibly beautiful and achingly sad song Andy wrote about his father’s death that begins with one of his most harrowing lyrics: ‘When my dad died / The worms ate out both his eyes.’ Yet while it’s full of pain and sorrow, it’s also a song that very much tells truth through fiction. Andy’s dad, you see, is very much alive.

“What kind of psycho would write a song like that?!” he chuckles, putting words in Kerrang!’s mouth.

“Great question! That song was based on a feeling, and a feeling that wasn’t even real because it was from a dream, but the dream felt real. And so, in my limited songwriting capacity, I set out a very bare, minimal explanation of what I thought might happen when my dad finally passed on.”

Some 15 years later, however, as writing progressed on Million…, a sad reality crept in after Rob’s father lost his longstanding battle with cancer in 2019. Needless to say, it hit the band leaders hard. Friends from their teens (Andy is about two-and-a-half years older), they’ve grown up together and, with the band, navigated and chronicled their turbulent experiences with faith. But that’s not all. After Rob married Andy’s sister in 2013, the pair have been brothers-in-law for almost a decade. They also both became fathers within five weeks of each other. Understandably, while the story within these songs might be made up – and pertain to a bigger, more universal picture – they’re infused with the very raw and very real emotions of their shared loss.

“Everything that was happening in our lives felt so big at that moment,” says Andy, “especially knowing that Rob’s dad’s battle with cancer was becoming less positive. In general, since our last record, I’ve been really obsessed with generational trauma, as well as the positive influence you have on those that come after you. When I had kids, I felt like having to investigate the uglier side of that coin: what happens when life ends, and, in this case, when it ended too soon. It was a delicate thing to do because I didn’t want it to be exploitative of the situation that Rob was going through, but it was also important to me to write about what was happening.”

“For me,” adds Rob, “our albums are a snapshot of the time we were in when we made it. This snapshot, while unique to what I was going through, is also something that has been going on since humanity has existed, and I feel there’s power in talking about that side of it. It’s not the most uplifting thing to talk about grief or death, but the fact that we’ve survived all this means there’s a lot of positivity there, and a lot of reasons to keep moving forward. So now when I hear it, I go back to those times before he had passed, and I’m able to relive the good moments in addition to the bad. It’s a really nice celebration of a time that I’m very, very grateful for.”

For all the sadness that floods this record – and it truly comes in waves at moments – The Million Masks Of God is not depressing. It’s an album that seeks out light even in the darkest dark – like the poem that inspired its title, like the adventure the pair have been on together for the past 15 years. It’s a powerful, beautiful testament to their friendship, their songwriting partnership, to both their resilience and that of all those who have been through the same thing before them.

“In a lot of ways,” adds Andy, “this record was a way for me to tell Rob that I was here for him as best as I could be there. There’s not a lot to do or say when that stuff’s happening. You just have to be there. This was a way to make me feel closer to him. I was able to work through a lot of the stuff that I was feeling and also seeing him go through.”

Perhaps nothing illustrates the pair’s special bond better than when they remember talking about playing Sleeper 1972 after the loss of Rob’s dad.

“I think,” interjects Rob with a dark humour, “I said, ‘My dad’s cremated, so the lyrics don’t make sense.’”

He bursts into laughter.

“Dark. As. Fuck!” Andy says emphatically. The pair then start laughing together again.

The Million Masks Of God is out now via Loma Vista

Watch Manchester Orchestra's new video for Bed Head, the first single to be taken from their upcoming album The Million Masks Of God.