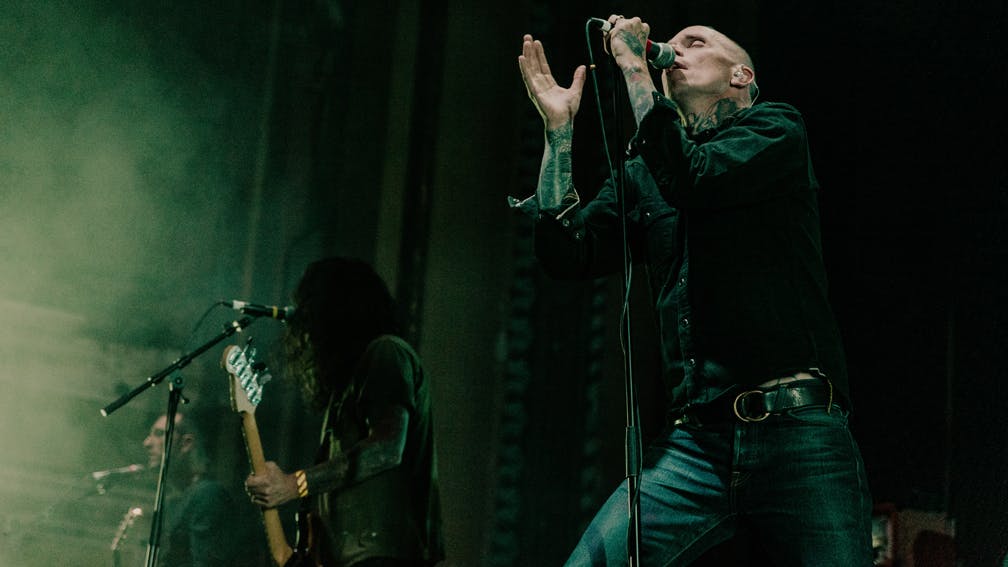 As daylight fades over the capital, there is a visible distinction between punters trawling up the hill to Alexandra Palace either for Lorde in the main hall, or Converge and Chelsea Wolfe playing together in the venue’s restored theatre. It’s a simple choice, really: rainbow face paint or dark T-shirts? Solar Power or Bloodmoon?

Those that choose the latter tonight are treated to a magnificent collaborative set from performers who are at the height of their powers. Starting as a commissioned project for Roadburn Festival’s 2016 edition, Bloodmoon has since become an album with Converge, Steve Brodsky (Cave In), Chelsea Wolfe and her long-time collaborator Ben Chisholm uniting once more this evening to air these songs for the first, and perhaps only, time for a small UK audience.

Hexvessel open proceedings with earthy rock that treads the line between folk tales and occult doom. I Am The Ritual and Changeling evoke wanderers and ancient woodlands, watched over by Kurt Ballou and the classical statues that flank the stage. The band’s ponderous pace and overt seriousness does occasionally come across as po-faced, but it balances out when they lunge into a psychedelic wig-out, where rumbling guitars and skirling violin cast a spell.

The intimacy and faded grandeur of this theatre suits the eerie, sepulchral quality of the headliner’s songs as Bloodmoon. Viscera Of Man’s opening salvo of hardcore riffing and the joint howls of Chelsea Wolfe and Jacob Bannon feel as exposed as the venue’s worn plaster. And while the ornate wall decorations and seating plan might seem odd at any other Converge show, it works perfectly to witness the band slowly build Coil and Crimson Stone to their roaring, apocalyptic climaxes.

What quickly becomes clear is the different energies each performer brings to the stage. Jacob is always a dramatic presence, wringing his hands in the air or pawing his face like a conductor for the music in the most literal sense. Chelsea is a more ethereal personality, swaying in black garbs. Her voice may not always project as much as you would like amid the doomy chaos, but her cool charisma is essential to the bluesy Scorpion’s Sting. Meanwhile, Steve Brodsky is every bit the full-blooded guitar hero, striking power poses and ripping solos left of stage.

The way these partners in crime work together as they move in and out of the spotlight and smoke is also apparent when they tackle each other’s songs. Chelsea’s spiralling doom anthem Vex is given an extra edge by Ben Koller’s titanic drumming and a triple guitar attack. Wretched World – from Converge’s 2009 album Axe To Fall – sounds rich and otherworldly, Kurt Ballou’s stabbed guitar harmonics echoing around the venue as Chelsea and Steve join Jacob’s dissociated croon.

The night closes with the eponymous Blood Moon, raising hairs on the back of the neck as Chelsea screams bent double into her microphone, the band locked into a grinding, heathen groove behind her. If these musicians only convene once in a blue moon, we can only keep our fingers crossed for another one soon.