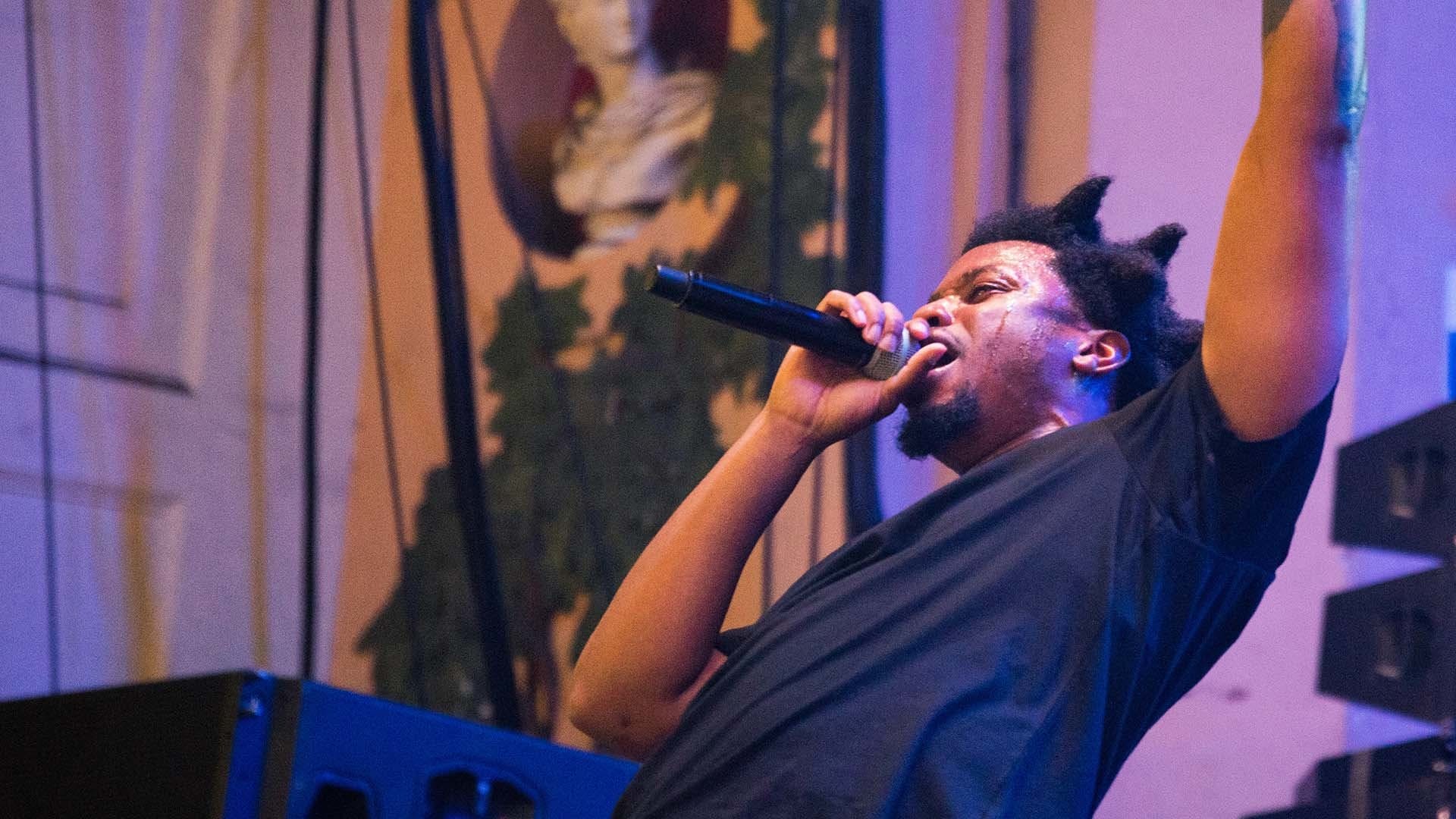 If you wished to measure the gravitational pull of Denzel Curry’s star power, then the near 5,000 people that have descended upon Brixton’s cavernous O2 Academy venue on a school night would be a good place to start. Even shortly after doors the stalls are thronging with people jockeying for position at the front of the stage, vying to be face-to-face with the ascendant Florida rapper.

If you’re late, not to worry, though. Once Denzel takes the stage it quickly becomes undeniably clear that his easy charisma and hard-hitting energy projects far up into the Academy’s nosebleed seats as he unveils superb album Melt My Eyez See Your Future tonight.

• Get a limited-edition Melt My Eyez… blue cassette now

Those that do turn up early tonight are greeted to by a diverse bill. Denzel’s running mate PlayThatBoiZay kicks off the night with a tight set of vampiric rap. Haunted House Party pops off with ease in this primed crowd, while Zay’s nocturnal swagger on Swarm shows why fellow night dwellers HEALTH sought him out for DISCO4 :: PART II.

Dexter’s sultry bedroom pop feels like handbrake turn, but her confessional, suburban tales and relatable charm vibe with the introspective side of Denzel’s own Melt My Eyez…

Only the murky beats of Leicester rapper Sainte feel a bit off kilter tonight, but he eventually hits his stride, working the crowd with his hype man to lead football chants for the headliner.

The opening neo-soul organ riff and jazzy chords of Melt Session #1 signals a shift in energy, all eyes and cameras directed towards Denzel as he strides confidently towards the mic stand and begins unpacking his knotty inner life in complex bars. ‘Eyes remain in freeze mode, I'm stuck in fight-or-flight / I'm deflecting my daily problems within my daily life,’ he spits, diarising his struggles with depression, celebrity and a world on fire, but it all leads into rallying the crowd through a triumphant cry: ‘I keep walkin’, I keep walkin’.’

Compared to the unbridled rawness people might have come to expect, Walkin’ and Mental are delivered from the perspective of someone who has worked hard to quell his demons, rather than being caught in the middle of twelve rounds with them as we’ve seen him before. Denzel is far from subdued, but as he glides through older, menacing cuts like 13LACK 13ALLOONS you start to wonder if his appetite for letting loose onstage has been sacrificed for his newfound equilibrium.

That is, until the stage goes dark. Samples of brass swell with intrigue. Then Denzel comes blasting back in with three times the amount of energy as he tears into a slew of hard-hitting fan favourites. His raspy barks on Threatz are raw enough to scrape off tattoos, while RICKY’s chorus finds pockets of new energy in the crowd. The stage is swarmed by Denzel’s entourage for SUMO, but the focus is firmly on him as he drives the tongue-twisting finale home, punctuating each expertly landed bar with a lunging punch like he’s a character in Street Fighter.

The 27-year-old has proven he can handle big crowds before – whether touring with Billie Eilish or packing out Camden’s Roundhouse – but rather than relying solely on his brash energy and formidable lyrical skills, tonight he trusts in his experience and lets his personality shine. He notes the date with a cheeky “May the fourth be with you,” by way of introduction to X-Wing, and grabs a fan’s phone for a beaming selfie before launching into Zaitoichi’s thunderous rave.

If any move tonight were intended to demystify any notions of him being “this super rap guy person” – as Denzel recently told Kerrang! – though, then it would be when he returns for the encore, stripped down to his vest and boxers to power through DIET_, rapping along with the audience without restraint or shame.

Bigger stages await, if he wants them.

Read this: Denzel Curry: “Everybody’s doing stuff that’s gonna make them fit in. I do my best to make sh*t that makes me not fit in”

Alt.rapper Denzel Curry’s fifth album Melt My Eyez See Your Future witnesses him pushing himself to his creative limits, with stunning results…

Listen: Denzel Curry teams up with T-Pain for new single Troubles, taken from this Friday’s Melt My Eyez See Your Future LP.

Denzel Curry and slowthai team up for new single Zatoichi, taken from upcoming album Melt My Eyez See Your Future…