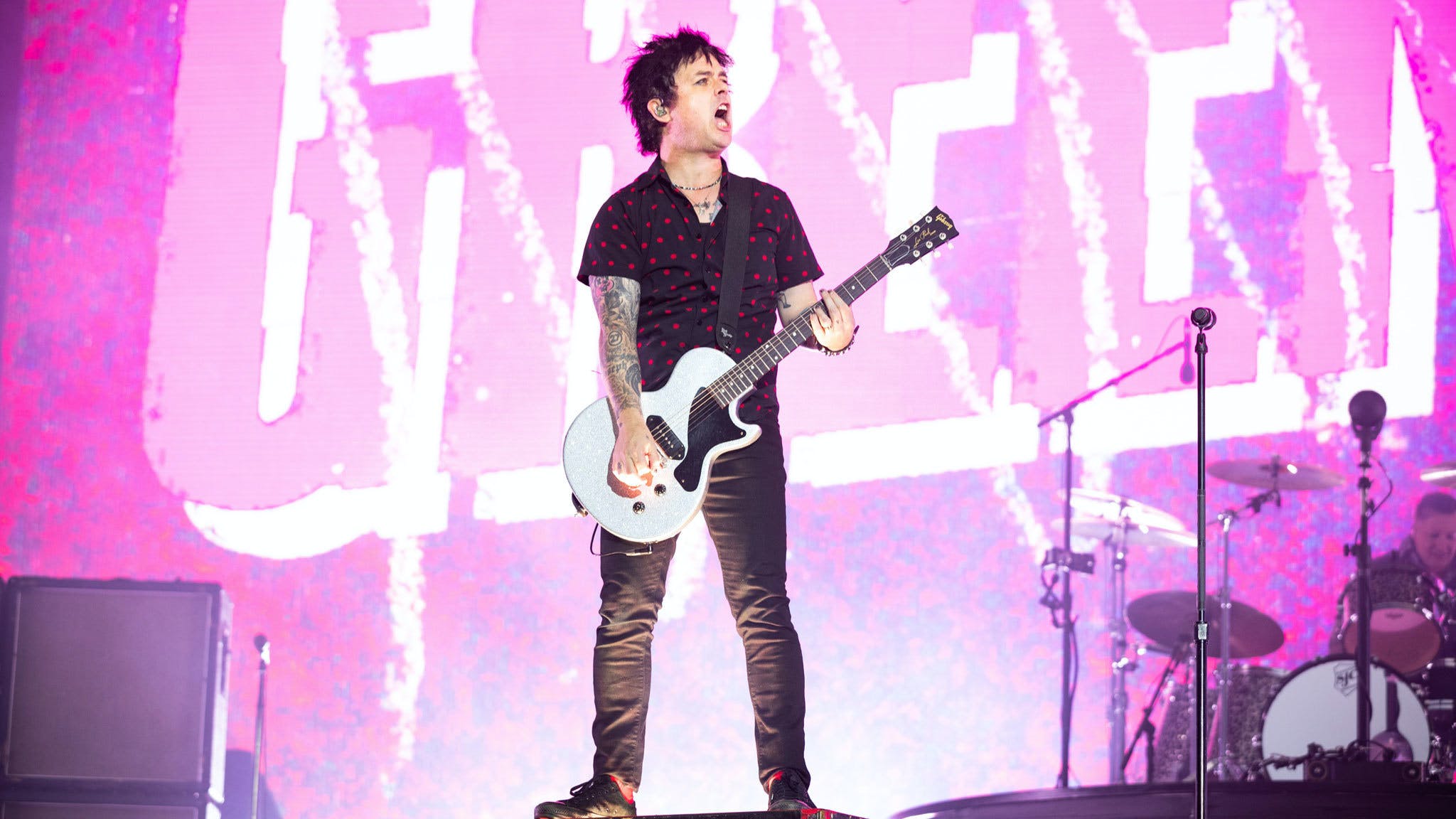 “I guess when they ask if rock music is back…” ponders Pete Wentz onstage, surveying the sold-out crowd during Fall Out Boy’s hit-filled set this evening, “75,000 fucking people in London are saying, ‘Fuck yes!’”

Indeed, not only has our beloved genre made quite the comeback in the three years since FOB announced their plans to hit the road with Green Day and Weezer in stadiums, but given everything that’s happened between now and then, it’s just nice to have music back, full-stop. That’s evident from every single inch of the London Stadium, with those both on and offstage tonight clearly here to do one thing, and one thing only: have a hella (mega) good time.

Fresh off a rough and rowdy opener from Amyl And The Sniffers, perennial summer favourites Weezer step things up a gear with a bangers-only set. Flanked by huge lightning bolts and pastel coloured production, this is stadium rock on their terms, with loveable frontman Rivers Cuomo in peak ’80s metalhead mode (replete with long hair, Metallica tee and a lot of denim). Backed by a wall of amps, the added bombast fills every corner of the venue, splitting the thickening clouds in two, and drenching the 75,000-strong crowd in sunlight for Pork And Beans, My Name Is Jonas and Hash Pipe.

There is nothing better than Weezer in the sunshine and this hour-long greatest hits session only serves to underline this long-known fact. Even two guitar malfunctions during Island In The Sun can’t derail the fun, with Rivers conducting the London Stadium to hum the riff instead – a deed then rewarded by a joyous rendition of Africa by Toto (the second of two covers, following a belting Enter Sandman earlier in the set). The closing one-two of slacker anthem Say It Ain’t So and a confetti-covered Buddy Holly send the already-heaving stadium into raptures, almost making up for the years-long wait. Truly one of the greatest live bands on the planet.

There’s nothing else for Fall Out Boy to do but take it up a notch – and they surely do. Pete wastes no time in showing off his spectacular, Rammstein-esque flamethrower bass during commanding opener The Phoenix, while vocalist Patrick Stump (who already possesses one of the most impressive voices in rock) has genuinely rarely sounded better. Sugar, We’re Goin Down gets an enormous sing-along early on, while the dance-tastic Uma Thurman and emo-pop-punk throwback of Grand Theft Autumn / Where Is Your Boy? showcases just how much of a musical force the Chicago quartet have become since their scrappy early days.

Yes, this is a massive night in east London – but across town Elton John is saying farewell in Hyde Park. The London Stadium still gets its share of the Rocket Man, though, courtesy of Save Rock And Roll, and Patrick’s genuinely jaw-dropping impression of the iconic English crooner from his piano. Speaking of music icons, Metallica’s Lars Ulrich gets a namedrop during FOB’s set too, with Pete joking before a rowdy This Ain’t A Scene, It’s An Arms Race that, “I feel like if we can get, like, six mosh-pits going, maybe he would pick up my calls…” The crowd duly oblige and continue the party into a deliriously fun closing run of I Don’t Care, Thnks Fr Th Mmrs and Saturday. We’re sure you’ll be hearing from Lars any minute now, Pete.

Bohemian Rhapsody. Blitzkrieg Bop. Drunk Bunny larking around onstage. Yes, it’s time – Green Day are finally here. Given the news coming from their home country today, there’s really only one song that should get things started. With his fist in the air, standing on a speaker, frontman Billie Joe Armstrong triumphantly strides out and launches straight into the American Idiot riff, sending the crowd wild. A genuinely unreal run of singles follows (seriously, what other bands can then play Holiday, Know Your Enemy, Boulevard Of Broken Dreams, Longview and Welcome To Paradise all in a row?!), with plenty of crowd interaction, a few ‘weeeeey-ohhhhh’s and thousands of phone lights in the air rounding out the full stadium show experience – something that Green Day have been pros at for literal decades now, and a skill that’s clearly not been lost in their time away.

A cover of KISS’ Rock And Roll All Nite brings something new (well… sort of) to their setlist – even if it’s not entirely necessary given just how many worthy songs they have themselves. Meanwhile, their legendary rendition of Operation Ivy’s Knowledge and the aforementioned Know Your Enemy give two lucky fans the chance to join the band onstage – with the former keeping Billie Joe’s guitar afterwards. The one-two of King For A Day into The Isley Brothers’ Shout adds even more entertainment to proceedings – even if following it with a stunningly emotional Wake Me Up When September Ends feels a tiny bit jarring. With a particular focus on everything from 1994 breakthrough album Dookie through to 2009’s epic 21st Century Breakdown (while Weezer and Fall Out Boy do opt for entirely career-spanning sets), there’s simply no let-up tonight. And yet, somehow, Green Day still have the energy for a formidable Jesus Of Suburbia, with explosive pyro and fireworks erupting before the encore.

Customary closer – or, at least, what we think will finish the show – Good Riddance (Time Of Your Life) plays out as Billie Joe goes it alone. “There are 75,000 people here,” he gasps mid-song, taking a moment to try to absorb it all. “How the hell did this happen?!” Finally, a moving live debut of All The Young Dudes brings things to a glorious end, and we’re left safe in the knowledge that, if they had to, these 75,000 fans would happily wait another three years just for another night like this.