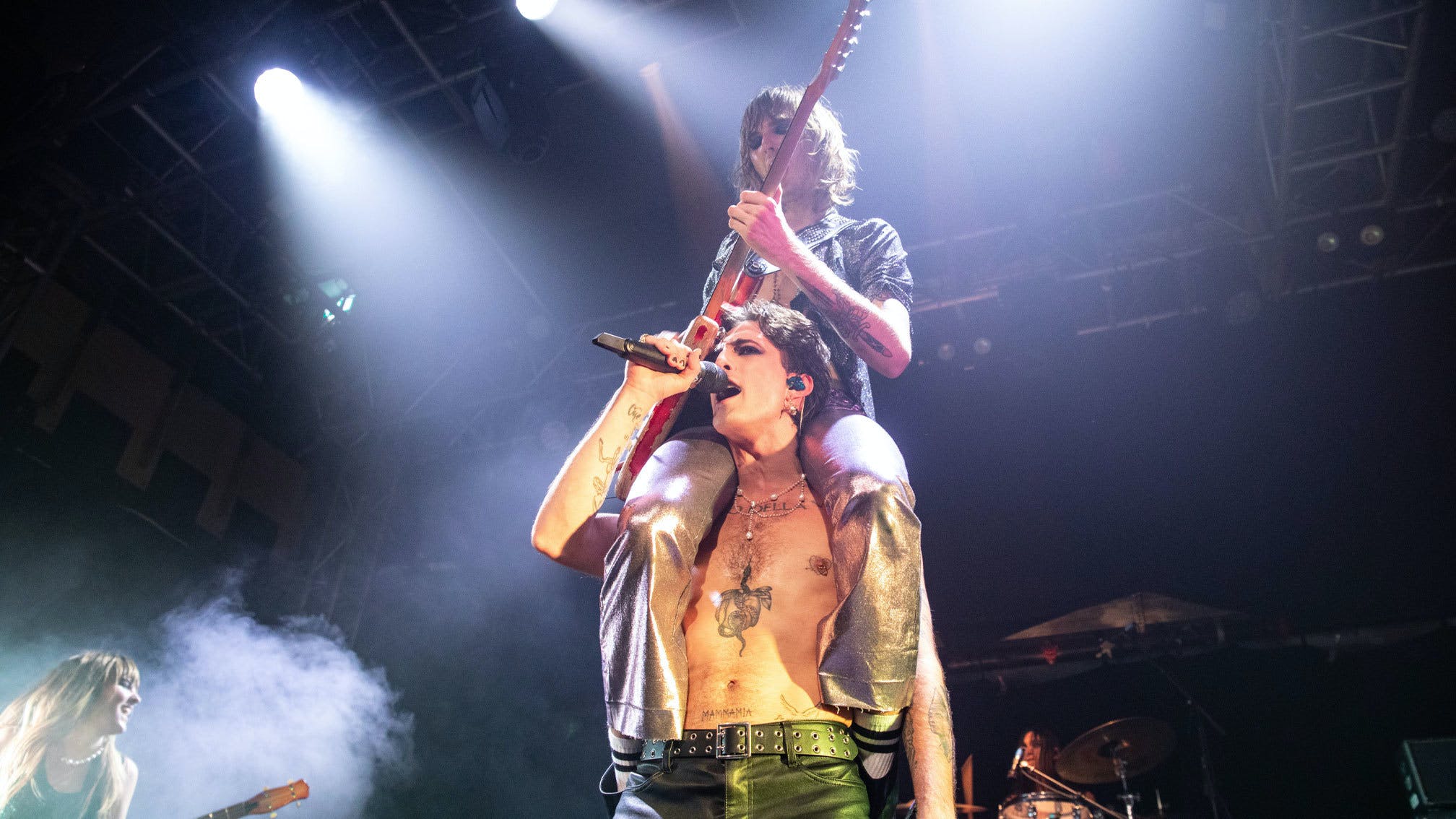 The Eurovision Song Contest has numerous superstitions and hexes. ‘The curse of the number two’ is thus named because no country which has performed in the second spot in the running order has ever won the competition. Artists wearing the colour green are said to be doomed to failure. Performers representing a nation that hosted the event the previous year invariably fare poorly with the judges. Even the number 43 is said to be unlucky.

Most dangerous of all, of course, is the ever-present threat that a group will appear only to never be heard from again. Much rarer is the possibility that a performer will springboard to global stardom. But in winning 2021’s Eurovision with a performance of Zitti e buoni at the Ahoy Arena, witnessed by a TV audience of 183 million, Italian quartet Måneskin did just that. In the months since, their feet have barely touched the ground.

“I think we’ve been in 15 or 20 countries in the past six months,” says Damiano David, the group’s singer, a sweet tally in the midst of a planetary pandemic. “We’ve been to pretty much all of Europe and over the U.S. as well. It’s great to have had the opportunity to travel and to visit new cities that otherwise we wouldn’t have had the chance to go to. It’s also cool to have feedback from different people and different cultures and to interact with all those people. It’s very inspiring and it’s very cool.”

“It’s been great,” continues bassist Victoria De Angelis. “It’s like a dream come true. It’s something we’ve wanted for many years, and to see it happen in such a short amount of time is amazing. It’s like we can’t decide whether it’s real or not. It’s sometimes difficult to tell what’s really going on.”

Okay, well here’s what’s going on. Currently, Måneskin attract 38 million monthly plays on Spotify, a number that places them in the Top 40 of the most streamed artists in the world. For anyone looking for context, in the same period lowly upstarts Metallica had just under 18 million plays. Obscure have-a-go-heroes such as David Bowie (15.5 million), The Rolling Stones (21 million) and The Beatles (25 million) are all dining on the Italians’ dust. Their label says the last artist they saw rise like this was Katy Perry.

“Seeing our numbers grow so much in such a short space of time is crazy,” admits Victoria. “Especially when you consider the kind of music we play, considering that some of the songs are in Italian. The numbers are crazy and we’re very grateful for that.”

Måneskin – whose line-up is completed by drummer Ethan Torchio and guitarist Thomas Raggi – spend so much time expressing gratitude that it can sometimes feel as if our interview is with a troupe of children’s television presenters. Nice young people one and all, the group formed as teenagers in Rome in 2015; by the time they won Eurovision they’d already issued two albums (Zitti e buoni is the opening track on their second LP, Teatro d’ira: Vol. I, released in March).

Eurovision wasn’t even the first TV competition the quartet had entered; playing cover versions of songs by The Killers and Franz Ferdinand, in 2017 they finished second in the Italian edition of The X Factor. Burnished by this success, the quartet’s first European tour was seen by more than 140,000 people.

Even so, it was the night in Rotterdam that truly lit the touchpaper. On a chilly Saturday morning via Zoom, Måneskin talk (happily) about having been given almost no time to see the sights in what is their first visit to New York. Who knows, they say, maybe later they’ll have a chance to take a stroll around Central Park. A few nights earlier, the group appeared on The Tonight Show Starring Jimmy Fallon; four nights hence, they’ll be guests on The Ellen Show out in Los Angeles. After headlining concerts at New York’s Bowery Ballroom, and The Roxy in LA, on November 6 the Italians stepped onto the stage at the Allegiant Stadium in Las Vegas as special guests of The Rolling Stones.

For a group whose average age is just 21, the change in circumstances is surely startling. As well as much else, it can be as startling for a band to get more than they expect as it is to receive less.

“Of course we’re aware of that,” nods Damiano. “We’re aware that it’s tough and that you have to be mentally prepared and mentally strong, and not everybody is capable of living this kind of life. But I would say that we are [capable] because we’ve prepared ourselves for five years. We’ve been friends since we were really young. We know each other very well. We know the best parts of us. We’re able to help each other every time something feels like it’s too heavy or too stressful or something. I feel like you have to be able to understand your limits and set boundaries when you need to rest and disappear for a little bit and focus on your personal life.”

So, when’s the next time you’ll be able to take a rest?

“Maybe [in the] summer,” says Victoria.

The first time Måneskin – confusingly, the Danish word for moonlight – appeared in London was for a date at the compact Oslo club, in Hackney, in February 2019. Prior to playing a short set for a small audience comprised mostly of Italian expatriates, three-quarters of the band passed the time smoking cigarettes in the small toilet adjoining their dressing area. What they didn’t know was that an extractor fan was recycling their second-hand smoke straight into the venue in which people had gathered to see them play. Were it not for a knock on the door from a uniformed environmental health officer, they might never have known it at all. Today, no-one in the group can recall if the £2,000 fine they got for lighting up in a public place exceeded the money they earned from playing the concert.

“I think the audience was, like, 500 people,” says Victoria.

“No,” Damiano counters, “it was less than that.”

It was actually 350 ticketholders, but never mind. As is the case elsewhere in the world, in the United Kingdom Måneskin’s star is on the rise. And, as for what the band’s fast-amassing gathering of new supporters can expect to see when they return to our shores? Clues can be gleaned from the triumph in Rotterdam. Regardless of the unconventional route they’ve embarked upon in pursuit of success in the rock world, they were, and are, at root a band who rely on their presence and their songs as the surest means of making an impact.

“We have a very raw show,” explains Damiano. “We just try to keep the focus on the music and ourselves. We don’t really use many effects or pyrotechnics. The main thing for us is interacting with the audience. It’s really rough and we try to use as much energy as possible, but we don’t use much production.”

Which is actually rather brave. In popular music, things that go up can often come straight back down. Things that rise as fast as Måneskin can fall even faster. As vast a shop window as Eurovision is, the band are in no doubt that the event is hardly the most credible, or indeed the most reliable, means of attracting an audience. But as Damiano says, even though the quartet didn’t view the jamboree as being “serious”, their focus on “what we could bring to the competition, rather than what the competition itself was, was serious”. And what they brought was a title-winning tune from an assured album that belies its authors’ relative inexperience.

Don’t let the wrapping and glitter of May’s extravaganza fool you. In the long term, Måneskin’s successes and failures will not be defined by a four-minute appearance on a live television show. They were never going to be a one-song wonder.

“No, we weren’t really worried about that,” agrees Victoria. “The reason that this happens to many artists is because they go [on Eurovision] having just the one song that they perform and don’t really have a much larger vision about what they want to do. If people liked our exhibition there then they would be able to dig deeper into who we are. So that’s what happened. So if they think that people just get forgotten after a couple of weeks, it’s just because they don’t have enough material for people to go on being interested in them.”

Judging by how far they’ve gone from that launchpad already, Måneskin will have no such worries anytime soon.

This article was originally printed in December’s one-off live music special. It has been updated to reflect the fact that Måneskin had to postpone their planned UK and European dates.