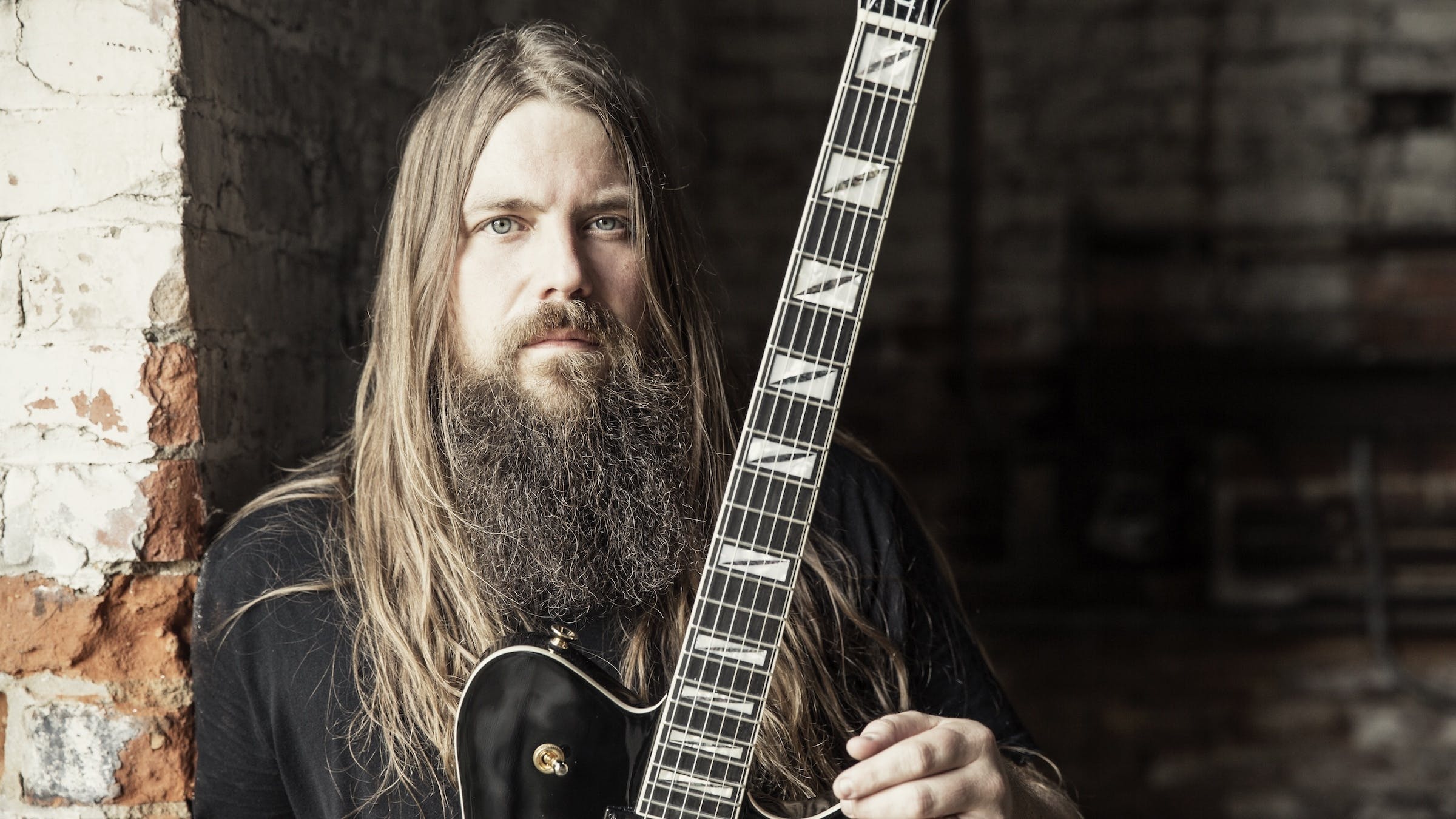 Make no mistake, Mark Morton loves playing metal. As the guitarist for groundbreaking groove metallers Lamb Of God, Mark has traveled all over the world, obliterating eardrums and whipping up circle pits with the crushing riffs that make up the steely core of the band’s sound. But though he’s honored to be a member of a such an awesome band, Mark decided that for his upcoming solo album, Anesthetic, he wanted to focus on his loves for blues, southern rock, and other types of guitar playing -- none of which were appropriate for a Lamb Of God record.

“I had this catalog of songs accumulating that clearly weren’t fitting into the framework of Lamb Of God,” says Morton. "They couldn’t be mashed into that filter. There’s some straight-up blues on the album, there’s some ’90s-ish grungy alternative songs on there, but most of it, about 85 per cent of it, wouldn’t sit right within Lamb of God. And that was the premise. I play all kinds of music. I’m known for being the guitar player in Lamb, and that’s a blessing, it’s my home. But I’m a blues rock player, man. I go home, jam with friends, play classic rock. So I think you hear more of that on this solo record.”

To be fair, Anesthetic is plenty heavy, with its hard rock moments leaning towards full metal and the occasional guitar part that could’ve fit into a Lamb Of God song shining through. But though the album features guest performances by vocalists like Chester Bennington, Papa Roach’s Jacoby Shaddix, Arch Enemy’s Alissa White-Gluz, and even Lamb Of God’s own Randy Blythe, Anesthetic never comes off as a collection of unused material or a gallery of famous friends. Mark’s guitar is the star of the show here, and as the guitarist gears up to take the album on tour, the guitarist is excited for fans to hear a side of his playing they may never have expected.

“Honestly, I didn’t realize what I was getting myself into,” laughs Mark. “I figured I had some tunes, I’d record them with Josh, get a little deal for the thing, record them, put them out, and that’s that. But as it started getting legs under it, and gaining momentum, then I started wanting to do [play it live]. Because the project has its own identity now.”

You’ve just announced your live band for the upcoming Anesthetic tour. What went into choosing who would be playing the album?

Picking out a live band was just about finding dudes who are good players and I want to hang out with, and finding who among that bunch was available. Mark Morales from Sons Of Texas will be singing. Doc Coyle from Bad Wolves and God Forbid on second guitar. Art Cruz, who I’ve been playing with lately, filling in for Chris in Lamb, will be my drummer… and I’ll be there too.

Will the guest vocalists from the record be making live appearances along the way?

Yeah, I think so. We’re looking at those possibilities. There’s a lot of guests on the album, but I’d love for that to happen wherever possible. We found out the tour was going to happen not too long before we announced it.

While recording the album, were there specific moments you played and thought, ‘Man, I can’t wait to play this live’?

Initially, it was the opposite, because the project, as it was originally conceptualized, was just a studio thing. I’ve made plenty of albums with Lamb of God, I’ve had great success with Lamb, I’ve had continued success with Lamb. I’ve made plenty of albums with Lamb Of God, so I figured I knew something about how all this stuff works. But I had no idea what I was biting off with this project. And that’s exciting -- I’m humbled, thrilled, energized, motivated by that, but I didn’t realize it was going to be all that. But once the album was done, and you could see the people who participated in it, the caliber of talent, you kind of realize, Okay, this is a bigger thing than I thought it would be. And then it became obvious, and kind of necessary, to put a band together and make this thing live, to give it kind of a pulse.

Where did the creative nutrition behind the solo album come from? Did it come from the same place as what you write for Lamb Of God, or is it a different creative process all together?

My intuitive response is that the solo album is probably more of an accurate reflection of me personally and my musical influences, and the way they manifest and how I play, because it includes everything. It includes that rock and poppy side, it includes the ’90s influence, and it includes metal. Whereas with LoG, it’s a metal band, and at this point it’s a metal band with a certain signature sound. And that doesn’t limit what I’m able to do, but it does influence what I’ll contribute to that band. Within LoG is a very established body of work, which I aim to respect, to add to, to push boundaries with but to respect with the body of work and the other four members of the band. The solo album is more directly reflective of me as a player and an artist, but it doesn’t take any validity away from my contribution and role of LoG, that’s just a little more focused genre-wise.

Was there anything you didn’t want to do with the solo album?

Oddly, the thing that I initially had decided that I didn’t want to do was traditional thrash metal. My thinking at the time was that I have the great fortune of being in a pretty world-class heavy metal band, and so that’s where I go to do metal. Why would I play metal anywhere else? But Josh Wilbur, my producer, had a different viewpoint on that. His thought was that Lamb fans were going to come check this out, and they were going to expect some metal, because that’s what they know me to do, and to not do that would be falling short. I should pay respect to that as well, because that’s what I do, what I’m known for. So we did start working on a couple of those metal tunes, and those songs became The Never with Chuck Billy of Testament and The Truth Is Dead with Randy and Alissa on it.

Can you listen to Anesthetic yet, or are you still too close to it?

I can listen to this album probably more than, say, a Lamb Of God album, because there are so many great artists on there to listen to. I happen to be writing and playing on it, but I get to hear Steve from the Black Crowes on drums, I get to hear Mike from Alice In Chains play bass, I get to hear Chester and Myles and Jacoby sing, I get to hear Jean Paul from Clutch play drums… there are so many great players and combinations of artists that don’t normally happen, that I’m a fan of that. It just happens to be in the context of my solo album. I still dig listening to this stuff. I’m pretty proud of this thing. I’m stoked on it. Just the process, the space it occupied in my life

With all the guest vocalists and contributing musicians, was there anyone who, even after everything you’ve experienced with Lamb Of God, you were starstruck by, or who made you think, ‘Damn, I can’t believe I get to work with this person’?

Chester [Bennington], for sure, gave me that feeling. One of those one of a kind voices, so talented, still at the top of his game. And I didn’t know Chester, personally, before we started working on this song. When the idea came up to approach him with it, I was like, ‘Man, we can’t get him. He’s a superstar. He’s never heard my name before, never heard of my band, never heard what I do.’ And Josh was like, ‘No way, I bet he knows, we’ll never know if we don’t ask him.’ And sure enough, I was on his radar. He heard the song and fell in love with it. And, like… I don’t really get starstruck. In my line of work, I’ve been around some real famous people. But sitting at a table, and co-writing a song with Chester Bennington -- more than his level of celebrity, it was seeing a guy like that at the place where his career was, being so creatively honest and open with me, in terms of what we were writing about, being able to take me saying, I love this part of your idea, and I’m not sure about this’ -- you can’t plan for that, you can’t buy it, you can’t teach it. We had a really good kind of rhythm, right out of the gate. Those moments, even more in retrospect, were really powerful.

The cover of Anesthetic is incredibly cool. Can you tell us about the concept behind it?

Yeah, man, that cover’s so cool. Everyone’s talking about it, too, telling me how great it is. It’s an artist named Daniel Danger who did it. We bounced some ideas back and forth, and we kind of came up with the Tarot card concept for each song. The actual front cover is actually his depiction of my home in Virginia -- a dilapidated version of my home in Virginia.

It’s interesting that you still hail from Virginia, even as Lamb Of God have become known as a huge, international band. What keeps you there, instead of moving away?

It’s so simple -- it’s just home. I’ve been a whole lot of different places, and there are places I love, places I can’t wait to go back to. I’ve been to the Great Wall, I’ve been to Jerusalem, Moscow, the Indian Ocean in Perth… but there’s just something about the air in Virginia, it’s just home. You can’t replace that -- at least, I can’t replace it. People ask sometimes, ‘You never moved to LA or New York!’ No, I go to those places. But there’s just something about the pace… it’s a little slower. Things are happening, but not too much.

Make sure to buy Mark Morton's Anesthetic when it drops March 1 on Spinefarm Records.