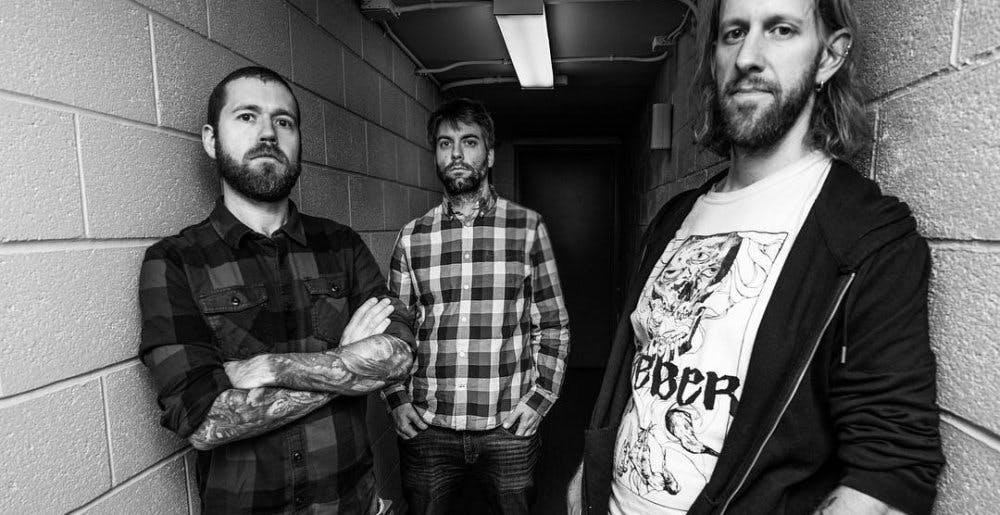 Dave Davidson has been the vocalist and guitarist of Boston technical death-metal band Revocation for 19 years. Considering he’s only 33, that’s a huge chunk of his life spent playing extremely complex riffs, listening to blast-beats, and growling at the top of his lungs night after night. So it’s understandable that after this long, he might want to change things up a bit.

Back in January, Dave announced Gargoyl, a new project with vocalist/bassist Luke Roberts (also of Ayahuasca) and drummer Josh Park, which takes the pace down more than a few notches and trades in the brutality and guitar solos for Alice In Chains-style distortion and deeply personal lyrics. (Don’t worry, Revo fans -- his death-metal side isn’t going anywhere -- he’s just splitting his time between the two projects.)

Since Gargoyl announced their first-ever live shows for this April (dates below), we decided to catch up with Dave to ask about what’s next for the project, his love of grunge, and what it’s like to slow down a little.

Gargoyl is so completely different from your previous work. What inspired the change?

Dave Davidson: For me, it’s a natural part of being a musician with a diverse set of influences. I’ve wanted to do a project apart from Revocation for quite some time now, and when I met Luke everything just clicked. We bonded over different bands and shared the same vision to create this weird, prog rock group that would draw on a variety of influences. It was really inspiring to start fresh on a new project with Luke since I have a lot of admiration for his writing, guitar playing and of course vocal abilities. Once we started writing the ideas just flowed and flowed. It was something that’s been building up in me for awhile I guess.

Where do the lyrics come from?

Luke is a bit protective of his lyrics since they’re very personal and come almost from his subconscious. However, there’s a theme of fear and hopelessness running through the EP and I think it’s a reflection of not only his personal feelings, but of society as well. The dystopian imagery he uses in his lyrics can be esoteric at times but there’s also lines that are so universal that they can resonate with anyone. I think we all carry around an emotional weight with us in one way or another, whether it’s heartbreak over failed relationships, losing a loved one or a friend or just looking at the world as this cascading series of fucked up events that seems to be never-ending. Hopefully through art people can find solidarity and solace. Luke has said to me that he’ll feel accomplished if even one person identifies with the lyrics in some way that helps them through a tough time, that to me is beautiful. Taking all these negative emotions and fears and turning them into something cathartic through a sort of musical alchemy.

Is it a nice break to play something less technical than Revocation?

Yeah, although there are definitely some challenging parts in this music for sure! Some of the more dynamic songs we’ve written are quite a challenge and Luke and I are employing a variety of techniques to add depth to the music. The drums are pretty technical as well -- when I was showing potential drummers the stuff they were all remarking on how deceptively hard the music was. Luke is great at creating a groove that you can move to while sneaking in these really cool and challenging parts here and there.

What feeling do you get out of playing something like Gargoyl that you couldn't get from Revocation?

It’s obviously less aggressive. Vocally, we both decided early on that we didn’t want to have any screaming, and no blast beats, just to really set it apart. But the music has this haunting sound, and there’s parts that are wrought with emotion and are so moving to me while at other times the music can be straight up unnerving. That’s one of my favorite aspects of our sound, I think we try to aim to capture that ineffable quality that we get from listening to some of our favorite bands. I’ll still get goosebumps listening to old Alice In Chains records sometimes --it’ll just hit me in this place that feels so real because the human voice is such a powerful instrument. I love doing extreme metal vocals, but a melodic vocal line coupled with lyrics that come from the heart hits me in a bit of different way.

You mention still getting goosebumps when hearing Alice In Chains, and that their influence comes through a lot when listening to Gargoyl. What are your favorite grunge albums?

I love the entire Alice In Chains discography, but Dirt is probably my favorite of them all if I had to choose. It’s such a classic record with a ton of haunting vibes and killer riffs. Nirvana’s Incesticide is another killer album from that era -- they were a band that for all their fame just did not give a fuck and continued to make some truly weird and exciting music. I dug that they always were pointing a bit of a middle finger at the music industry. A band like Faith No More isn’t considered grunge, but they were around in that time period, so I’ll include their album Angel Dust on the list for me as well since it had such a profound impact on me as a kid. Patton’s melodies were so unique and I was always impressed by the multitude of vocal styles he possesses. Revocation actually ended up playing a one-off festival in Montreal that they headlined and I got to watch the whole set side stage. They put on an amazing performance and I’ll never forget that experience...brought me back to being a kid again.

Do you have plans for Gargoyl to become a bigger project in the future? What can we expect as the project evolves?

Yes, we definitely have plans to do a full-length record. I’m looking to record in the summer if all goes to plan. We actually have a full length album already written so it’s just a matter of finding the time and the studio. We’ll be making our live debut in April at a few select northeast shows, and we intend to play some more shows to get the word out over the summer as well. Hopefully this will all culminate in a full North American run to help promote the full-length when it drops, but we’re just taking it one step at a time for now.

See Gargoyl at their first three shows ever:

Skeletal Remains and Psycroptic fill out this massive fall trek.

Gallery: Heavy Metal Karaoke at Revocation's Listening Party for The Outer Ones

We sang our hearts out to some Metallica and Judas Priest with some of Revocation's biggest fans.