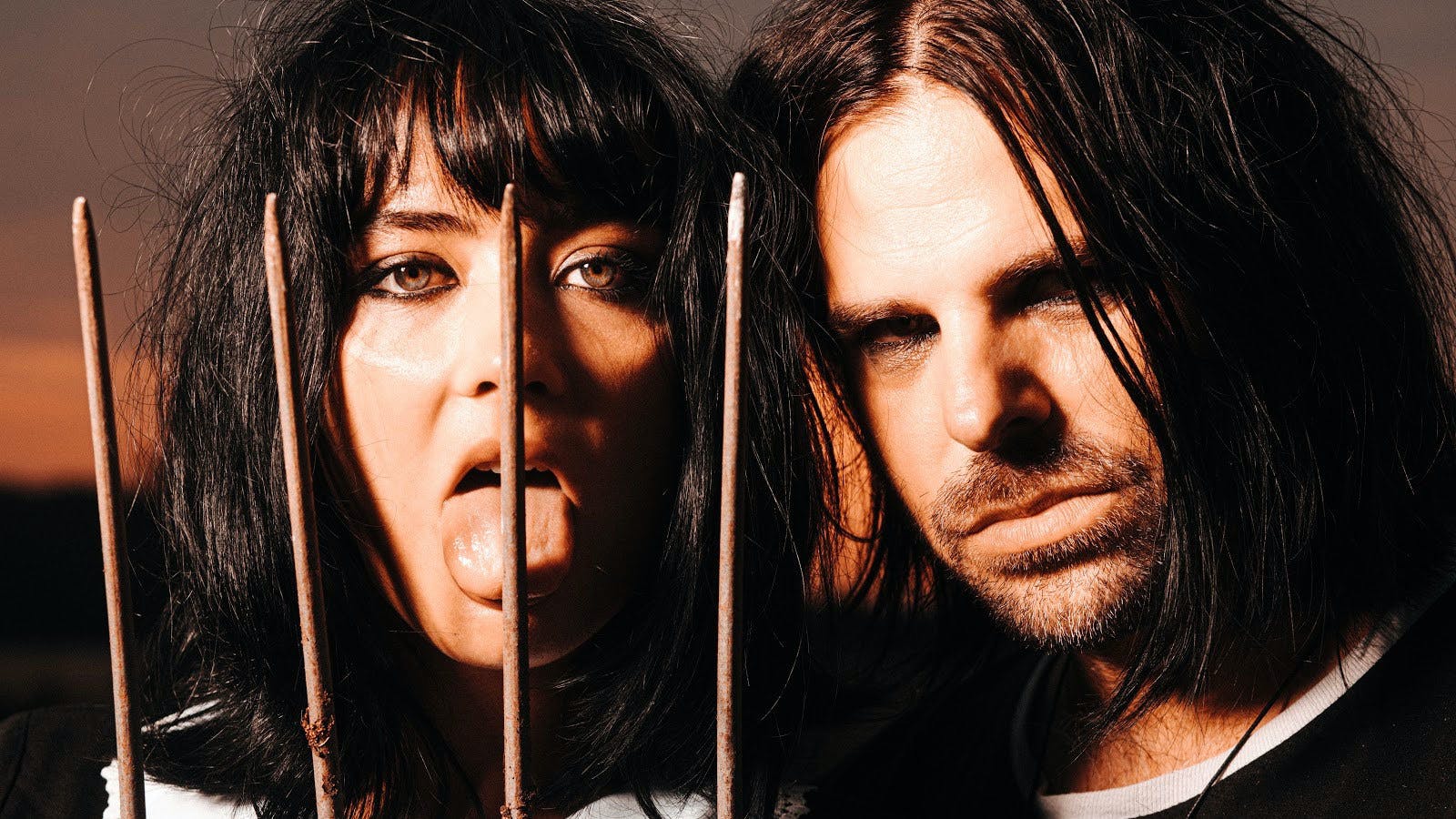 For most bands, there’s a thin line between the lives they lead and the music they make. Those things usually inform each other, too – life bleeds into the songs, but then the experience of taking those songs on the road becomes part of that life. They can, obviously, be separate, but at the same time they’re two halves of the same whole. That’s why, when the coronavirus pandemic brought the planet to standstill, so many bands had their worlds turned upside down. Self-described “disgusting rock band” Saint Agnes were no exception. Their raucous gigs attracted a lot of attention, helping to build a fervent following, but in the blink of an eye it was gone. For the first time their lives were, well, normal.

“Suddenly,” begins frontwoman Kitty A Austen, as she pours a glass of red wine from a bottle she’s sharing with founding bandmate Jon James Tufnell, “our lives were indistinguishable from our next-door neighbours.”

“It’s given us a little view of what the other side of life might look like,” adds Jon.

“And it looks shit, to be honest!” cackles Kitty.

It’s not that the band – completed by drummer Andy Head and bassist Ben Chernitsky – deliberately wanted to be different. They didn’t ask to be on the fringes, it's just the space they consistently found themselves inhabiting and existing in – not just musically, but as people. The fact they felt like outsiders, however, quickly shaped both the direction and the aesthetic of the band. Truly, Saint Agnes is an extension of their lives, and of who they are.

“As people, we’ve never felt like we’ve fitted in,” explains Kitty, “whether that’s in our families, in school, university, the music scene, the mainstream. I never really felt a part of any of that. And when you don’t fit, you have no choice but to not fit in. And as you get older, you start to enjoy that and want to push it as far as it can go – to be a spanner in the works.”

“At the time in London, everything felt a little too cool for school,” adds Jon. “We wanted to be confrontational. Even live, we did what we did in order to piss the audience off.”

The idea of being a spanner in the works was at the core of the band when it first started – after Jon and Kitty's former groups played a show together and he, eventually, convinced her to start a project with him – and it remains firmly in place today. At first, that modus operandi manifested itself most obviously in the band’s wild live shows, but it’s also at the heart of their ferociously DIY ethic and distinctive aesthetic. The band not only produce all of their own music and release it on their own Death Or Glory Gang label, but they also make their own videos. It all combines to create their own dark and macabre world, one that’s both recognisable, but also distorted. Every Saint Agnes song is about things that happen in real life, but are then transposed into a murkier, more evil, more gothic, parallel universe.

“We take everyday narratives,” says Kitty, “and blow them up into larger-than-life fictions. But it’s still stuff that everyone can relate to. We’ve always tried to create our own world with our songs because the way we write is very visual. I can’t really write a song without also having a visual idea of what the song would look like, what the music video would look like.”

“We talk about the world it exists in more than we talk about the nuts and bolts of each song,” admits Jon, “and that world we’re picturing informs what’s going to happen.”

New mini-album Vampire – which follows 2019’s debut album Welcome To Silvertown and 2020’s follow-up EP, The Family Strange, the physical copies of which both sold out almost instantly – continues the evolution of this alternate reality. Consisting of four original songs and two covers – a scorching rendition of Nine Inch Nails’ Wish and a primal take on Grinderman’s No Pussy Blues that was praised by Nick Cave himself – it presents the most confident and grotesque vision of Saint Agnes’ world to date. Not only are Vampire’s songs exhilarating and breathless, hostile and provocative, but the band have also included five ‘psalms’ that punctuate the music – interludes of creepy sound effects and snippets of dialogue and samples that round out the experience of what Saint Agnes is.

Yes, Kitty is one of the most fearless, fearsome and exciting frontwomen around – surely a superstar in the making – but this band is about more than just making music. It’s a feeling. It’s a way of life. It’s about finding a sense of purpose and meaning in an increasingly bleak world, about finding your place by being yourself, not by trying to fit in with everybody else. That’s not something Kitty has always felt empowered enough to do, but Saint Agnes helps bring it out of her, and she hopes it can help others who feel as excluded as she once did to have the courage of their convictions. She hopes that the band can help others to unashamedly be who they are and follow whatever dreams they may have, however outlandish they may seem. It’s a noble cause, and one that bristles through every fibre of the band’s existence. Even so, there are still days when doubt creeps in. Thankfully, it rarely lasts long.

“You have to be 100 per cent committed to band life,” says Kitty, “or it’s not going to work. Before lockdown, there was always this nagging little doubt in the back of my mind, like, ‘Is this the right thing to be doing with my life?’ It’s so hard and the rewards can be slim, you’re always thinking, ‘Fuck! Should I be doing this or should I be saving a deposit to buy a house?’, and all that normal life stuff. But when the pandemic happened, despite then effect it had, I realised very quickly that the band is my life. It’s the only thing that brings me total joy.”

Saint Agnes' Kitty: "Choose to challenge the people you love, choose the difficult conversation, and we can create something beautiful"

The theme for this year's International Women's Day is Choose To Challenge. Here, Saint Agnes' Kitty discusses why it's important to challenge those you love, even if it feels difficult or easier to ignore it. (Trigger warning: Sexual assault.)

Exclusive: Check Out The Haunting New Saint Agnes Video, Move Like A Ghost

Watch Saint Agnes' new video for Move Like A Ghost