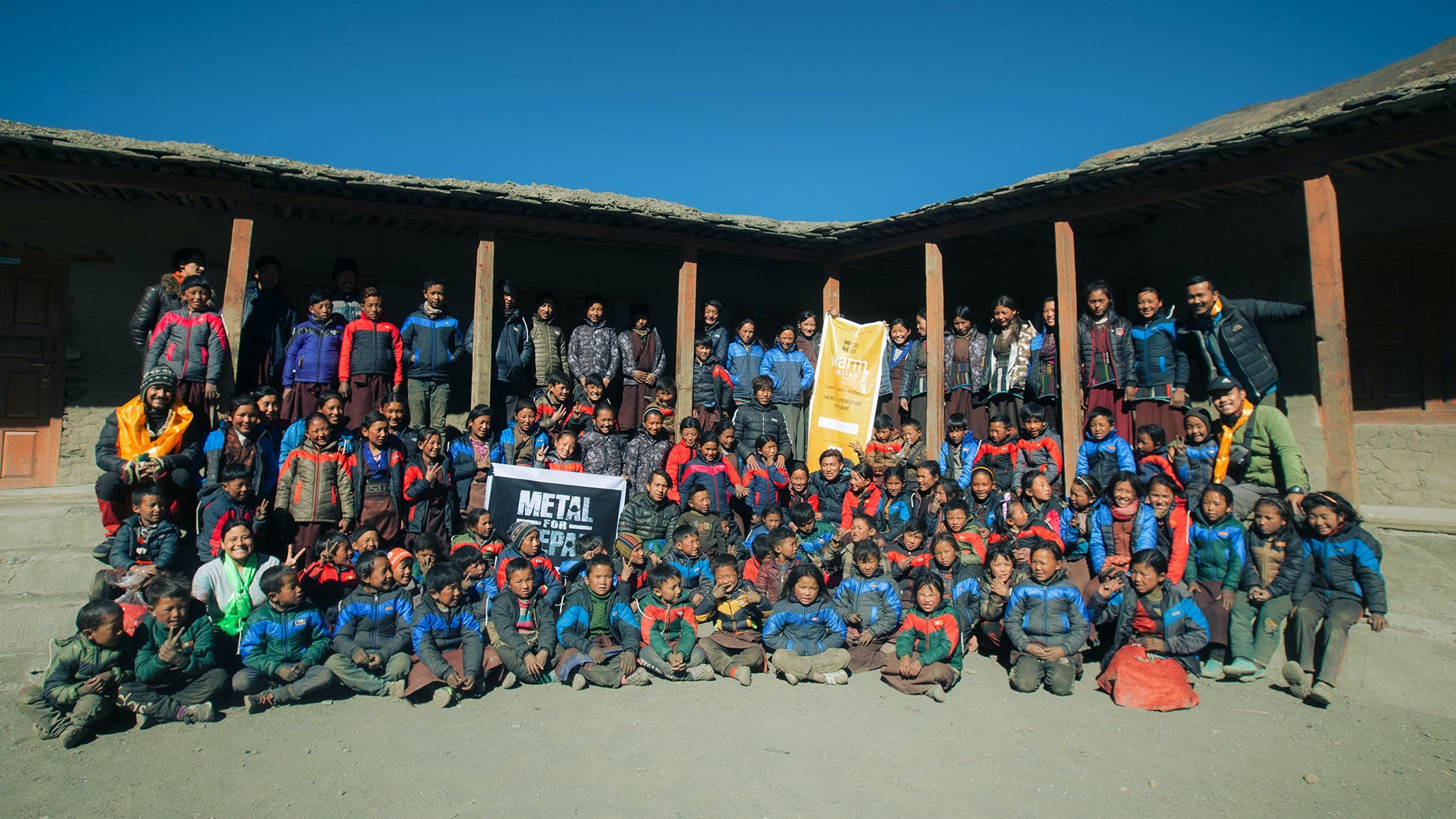 Fifty seconds. That’s how long the earthquake lasted in Nepal back in 2015. What happened during those fateful moments led to 9,000 deaths, over 20,000 injuries, and the destruction of 600,000 structures in and around the capital city, Kathmandu. It triggered an avalanche at Mount Everest that caused further devastation and left the country with an estimated reconstruction cost of $9 billion. Earthquakes of this scale are catastrophic no matter where they occur, but with Nepal being one of the poorest countries in the world, the damage and decimation was exacerbated. The UN reported that 2.8 million Nepalese had been displaced because of it.

Underside are a metal band from Kathmandu. Through the 2000s and early 2010s they, along with a handful of other heavy bands such as Ugra Karma and X-Mantra, were working hard to nurture and grow the metal scene in the city.

“It was pretty intense,” remembers Flower KC (pictured below), Underside’s manager and gig promoter, from his home in London. “There was a small scene, but it was very hardcore. There were only one or two venues that would host shows, and you would see the same 200 kids every week. It was raw, committed and very connected.”

Wanting to continue the city’s musical legacy that dates back to its psychedelic rock scene in the ’60s, Flower and the members of Underside started Silence Festival in Kathmandu in 2011.

When the earthquake hit in 2015, Flower and the band’s priorities changed quickly. They wanted to help the relief effort in whatever way they could, so they reached out to the metal community for help.

“We had friends in Switzerland that had played [Silence Festival] before. They did a fundraising gig called Metal For Nepal, then that kind of spread," says Flower. "People got in touch from Brazil and really mad places, you know. That was the first time I actually realised that this is truly a global community. Literally, people would send me $50 from their local show to put towards what we were doing.”

The support was such that Flower registered Metal For Nepal as a charity to further help those displaced and affected by the earthquake. MFN joined forces with a Swiss non-profit called No Silence For Nepal and a Czech charity called People In Need, and together they rebuilt 328 homes in the worst affected villages in northern Nepal.

“That took everyone by surprise because we didn't really realise how powerful this community is,” he remembers. “We rebuilt the whole village purely by metal. It was very empowering.”

Flower goes on to say that during this time of national disarray and devastation, he was conscious of getting the money and aid to the right places. “The government started saying that you can't bring money into the country. They wanted us to put the money into the Prime Minister Relief Fund. We know these politicians inside-out, so there's no way we'd have done that! We trust these organisations more than our own politicians.”

By the end of 2015, proud of what they’d achieved in their humanitarian mission, Underside and Flower went back to their lives. “We gave the last of whatever money we had raised. We finished it all off and went back to pursue our dreams. We weren’t a charity; we were a metal band,” he says.

Some busy years for the band followed; making music, touring and further building Silence Festival. In 2019, they even played Download Festival, making them the first Nepali band to perform at the iconic rock and metal weekender.

Then, in 2020, the pandemic reached their motherland. “I woke up in my apartment in London. I saw a video of a Canadian lady who runs an orphanage in Nepal near the India and Nepal border. She was crying her eyes out,” Flower recalls, visibly upset. “A lot of daily wage workers were stranded in Nepal and India because the countries had closed their borders due to COVID. This means no water, no food, nothing. There were pregnant women there and stuff like that.”

What normally is a free border between the countries became a brutal limbo for hundreds of thousands of migrant workers. Flower immediately called the vocalist from Underside, Avishek, to make a plan. At first they decided to simply ask all of their friends to donate $20 each.

“After I had my breakfast I was just thinking, 'Is that the best you could've done?' It was the easier option, for sure, but I knew I could do a lot more than that. I called him back again and said, 'Hey, dude, it’s going to take a lot of energy and effort but I think we can do this. Remember 2015? Let’s reignite Metal For Nepal again!'”

Flower and the team regrouped and partnered up with grassroots organisations that were on the frontline giving food and aid to those stranded. This time round, Flower reached out to the international tattooing community to spread awareness too. Not only did members of bands like Cancer Bats and Testament show huge support for the cause, but tattoo artists like George ‘Orge’ Kalodimas and Dillon Forte became trustees too – even designing the MFN merch.

As the borders reopened and the situation improved, their mission’s focus switched to the streets of Nepal and to the large number of low-income workers affected by the pandemic.

“The problems didn’t stop when the border issues were resolved,” Flower explains. “There are tons of daily wage workers like rickshaw drivers and cheap labourers, who were having to work throughout the day and work all night make money. So we started feeding all the street children, rickshaw drivers, labourers and all sorts of people. We did that for more than six months pretty much every other day.”

Growing up in Kathmandu, Flower describes his upbringing as comfortable and middle-class compared to others’. According to reports from 2018, 25 per cent of the country live below the poverty line and over 5 million people are undernourished. Given the huge impact that the pandemic has had on the country, these figures could now be much higher. With this in mind, as well as supporting the low-income workers in cities, MFN started sending rations and aid to the marginalised and indigenous communities that were also affected.

MFN’s Warm Smiles project in 2020 focused on sending warm clothing to children in the remote, mountainous areas of Nepal. The people that live there face harsh winters as temperatures regularly drop to below -15ºC. During the pandemic, when many students were attending lessons remotely and connecting with their classmates and teachers online, the children in this Himalayan area just didn’t have those options.

“You forget about remote learning when the school doesn't even have a computer,” Flower explains. “I asked the kids, 'What did you all do for two years?' And they said, 'Nothing.' That’s a big loss for the nation, and for their own growth.” He goes on to say that this inspired MFN’s current project …And Computers For All, aptly named after Metallica album …And Justice For All and driven by the goal of getting laptops to the schools, teachers and eventually students.

Through the lottery of birth, the vast majority of people on Earth are born into ruthless hardships and extreme poverty. The internet is a great tool to raise awareness about international crises, inequalities and corruption. We are connected by it in ways never seen before in human history. As such, the metal community is more linked than ever, with sturdy bridges being built between scenes, movements and musicians from Catford to Kathmandu. This network is oxygen for organisations such as Metal For Nepal, that continue to grow and provide vital aid to people in need.

Proud of what their work so far, Flower is dedicated, motivated and looking to the future. He feels that the work they do with Metal For Nepal is in line with the true spirit of metal.

“The counterculture vibe and the rebellion in this whole culture of metal hasn't died in many places in the world. There was a time when you would get arrested just for having blonde, spiky hair and tattoos in Nepal. A lot had changed just because of this project. With Metal For Nepal I want to make sure that we continue to focus on the education of the children, while trying to challenge the taboos and stigmas and stereotypes around people who look like me in Nepal.”

Get involved with Metal For Nepal

Underside Get Wild And Fight Back In New Video

Watch This Eye-Opening Documentary All About Nepal's Metal Scene