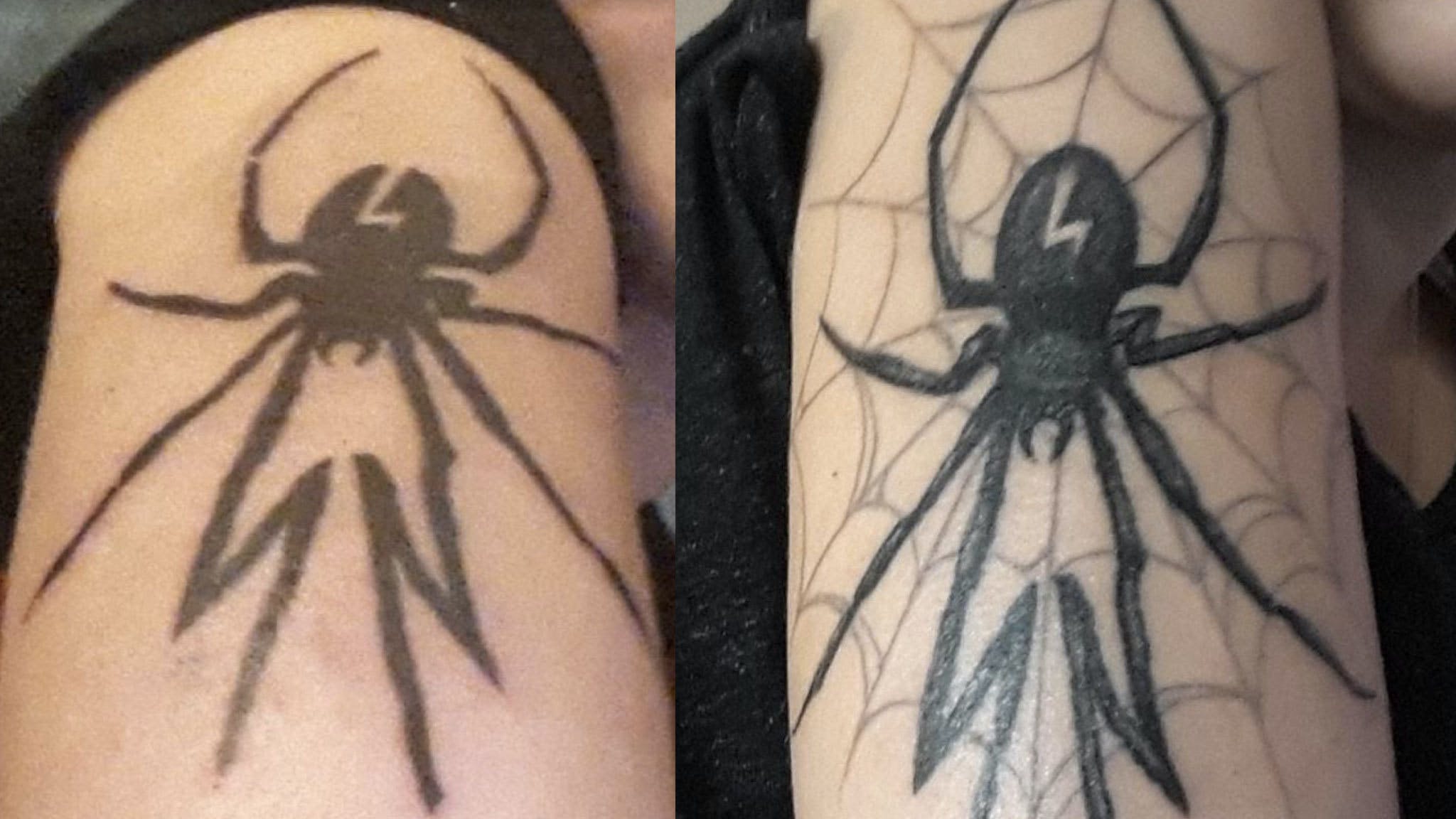 I was a big fan of My Chemical Romance throughout my teenage years. I danced to Teenagers whenever it came on the radio, memorised Ray Toro’s speech at the beginning of the I’m Not Okay (I Promise) music video, performed a dramatic rendition of Helena on Singstar for PS2 and religiously hunted eBay for a Black Parade jacket I couldn’t afford.

Back in 2010, people were still hooked on The Black Parade, but when Danger Days: The True Lives Of The Fabulous Killjoys was released, everyone I knew hated it. It wasn’t dark enough, or emo enough… the list goes on. But I loved it and, in fact, in my seemingly unpopular opinion, I still think it’s their best album to this day.

A week after my 18th birthday, I got a tattoo of the Danger Days spider on my arm. I found the cheapest tattoo parlour I could, a cramped a basement of another shop, badly lit and reeking of antiseptic. I walked up to the counter and explained why I was there as if I was attending a job interview, before they ushered me into the room with all the machines.

My artist printed off the stencil and showed it to me – it was about the size of a Post-it Note and I felt like it wasn’t big enough for a first tattoo. You know the advice people usually give when it comes to tattoos – about starting small?! Apparently that went out the window and I asked for the spider to take up most of my upper arm.

He placed the stencil and I smiled and nodded at myself in a mirror. I couldn’t be giddy and excited about it because that was obviously not what a cool, collected adult would do. So I said, ‘Yep, that’s fine,’ and took a seat.

The needle was nothing in comparison to attempting to make small talk with a bunch of burly tattoo artists 20 years older than me. It took about an hour for the thick black lines to finish burrowing into my skin, and then it was done. I smiled at the giant spider clinging onto my swollen arm, feeling proud of myself that my first tattoo wasn’t some generic anchor or heart like everyone else had. Mine actually mattered. The artist wrapped my arm in cling film, and I strolled out of there like a model down a runway with MCR blasting through my headphones.

Pictured above: The original tattoo

The buzz didn’t last long, though. I met up with a friend the next day, and rather than telling me how jealous they were, they immediately asked, ‘Why’d you get the worst album?’ I defended it, explaining how Danger Days was the MCR record for our generation, and how it had more positivity than The Black Parade. But then they focussed in on how the spider actually looked. The lines were too wobbly, the ink was too thick, the legs weren’t even.

They made me regret getting it done at a sub-par tattoo parlour, but not the tattoo itself. That feeling came later. People would jump away from my arm in faux fear thinking they were funny, or they simply asked, ‘Why?’ Everyone who saw it seemed to find a way to mock it, and I felt like an idiot, a stupid kid who’d rushed getting her first tattoo. I started to have this innate fear I’d become just like one of those old men with a faded, mushy Lynyrd Skynyrd tattoo that no-one could read.

I wore long sleeves, and if anyone did happen to see it, I’d shrug and say, ‘It’s just a spider.’ Worse still, I became so embarrassed that I stopped listening to My Chemical Romance altogether. I laughed along with my friends when they ridiculed me for liking the band once upon a time, and, when I was 20, I even tried to cover it up.

My Danger Days spider is not discreet. It takes up a big chunk of my arm and has thick black lines that no colour can cover, so all I could really do was make it more of a spider. I went to a new artist, who added highlights and a web to the creature. When they suggested covering the lightning bolt on the body, effectively erasing any hint of My Chem, something clicked in my brain: I refused and nearly snatched my arm away from the gun. Even in all of my faux-emo-hating pretentiousness, deep down I knew that I still wanted it to be the Danger Days spider. Not long after, I returned the creature to its natural habitat by adding some fellow insects and flowers to my arm. When anyone asked about my sleeve, I would shrug and say, ‘Just some cool bugs.’

Pictured above: The cover-up

When I moved into my first flat by myself, unsure what to do with my life, the one thing that brought me comfort was listening to all the music I used to love. I went back to Paramore and Fall Out Boy and MCR, and instantly realised how much I still resonated with Danger Days. The Kids From Yesterday in particular has an overtone of hope that everything is going to get better – a sentiment I really needed at the time. Going back to that album as a semi-adult, realising it was amazing regardless of anyone else’s opinions, I decided to stop lying about my tattoo.

Now, whenever someone asks about my arm, I tell them it’s an MCR spider with some bug friends. I still get funny looks and obscure compliments, but it doesn’t bother me. Plus, when the band announced their reunion and everyone on the planet rejoiced, my tattoo essentially became cooler than ever.

I’ve gone through so many different emotions from having this giant spider. Yes, I might come to regret it again at some point, but if I do I’ll probably just stream Danger Days and change my mind back. Tattoos – even your most embarrassing ones – are nothing to be ashamed of. They’re like old friends. Sometimes you completely forget how you met them and why you were ever friends in the first place. Other times you reconnect and remember everything you love about them. You reminisce about the old days, and feel so glad to have this friend in your life until the end of time.