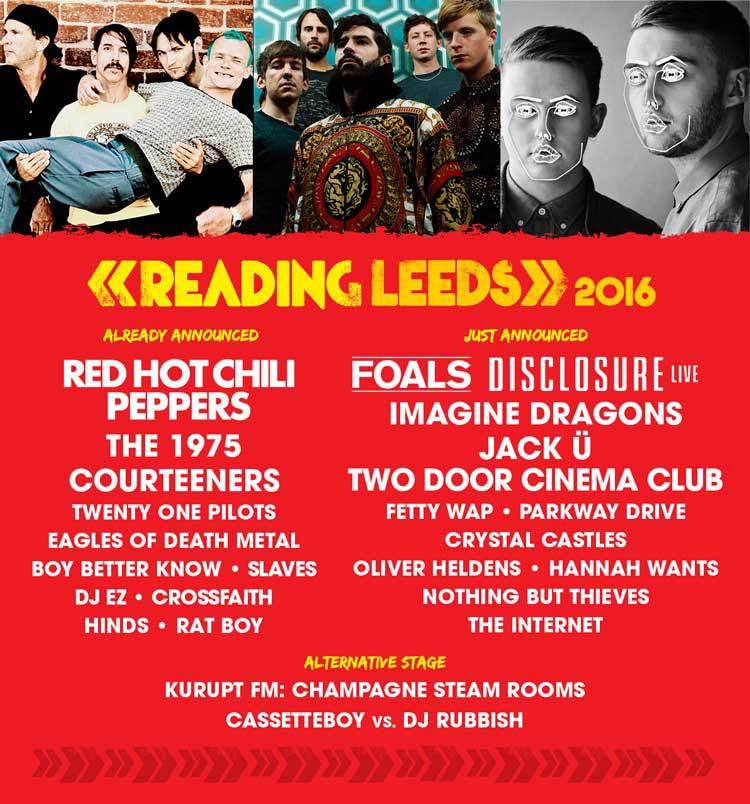 More bands have been added to the Reading & Leeds Festival line-ups.

STOP THE PRESS! STOP WHAT YOU’RE DOING! STOP EVERYTHING! Reading & Leeds Festival 2016 has just gotten even bigger! Without further ado, please welcome the latest bands to the line-up:

Speaking exclusively to K!, Frank Carter says: “Reading and Leeds Festivals are an institution in international rock and roll. As a fan, it’s a festival of legendary performances with each year birthing new “I was there” moments. As a musician it’s a milestone in your career if you are lucky enough to play it. It’s a place to truly try and find your personal best and initiate yourself into the halls of legend. From my own perspective, Reading and Leeds is a festival that has enormous sentimentality. When I was very young I would watch those life-changing sets on television and I would record them and watch them until the tape broke. When I was old enough to go (my first year was in 2000 watching fucking Rage Against The Machine, Slipknot, Deftones and At The Drive-In!!! How’s that for a first festival!) it was everything I had hoped it would be. I stood in awe of all of my favourite bands, while they each changed my life forever. As a musician, I try every single year to give a performance that will surpass every band on the bill and leave everyone who watched us saying “I was there”. 2016 will be my 9th year performing at the festivals and it will be my first year playing on the Main Stage. It’s been a long road, but I will finally be able to say…. “I was there”. I hope I get to play Reading & Leeds Fest every single year. See you in the pit!”

Excited? You should be.

These bands will join the previously announced headliners Red Hot Chili Peppers as well as twenty one pilots, Crossfaith, Slaves, Parkway Drive, Imagine Dragons, Nothing But Thieves and, notably, the emotional return of Eagles Of Death Metal.

Reading and Leeds takes place over the August bank holiday weekend between 26 – 28 August, 2016. Weekend tickets are priced at £213 (including booking fees) and are available right now from the Kerrang! Ticket Store. More announcements are expected over the coming months, so watch this space…

Be sure to watch our highlights from last year’s festival to get you in the mood for Reading & Leeds 2016: