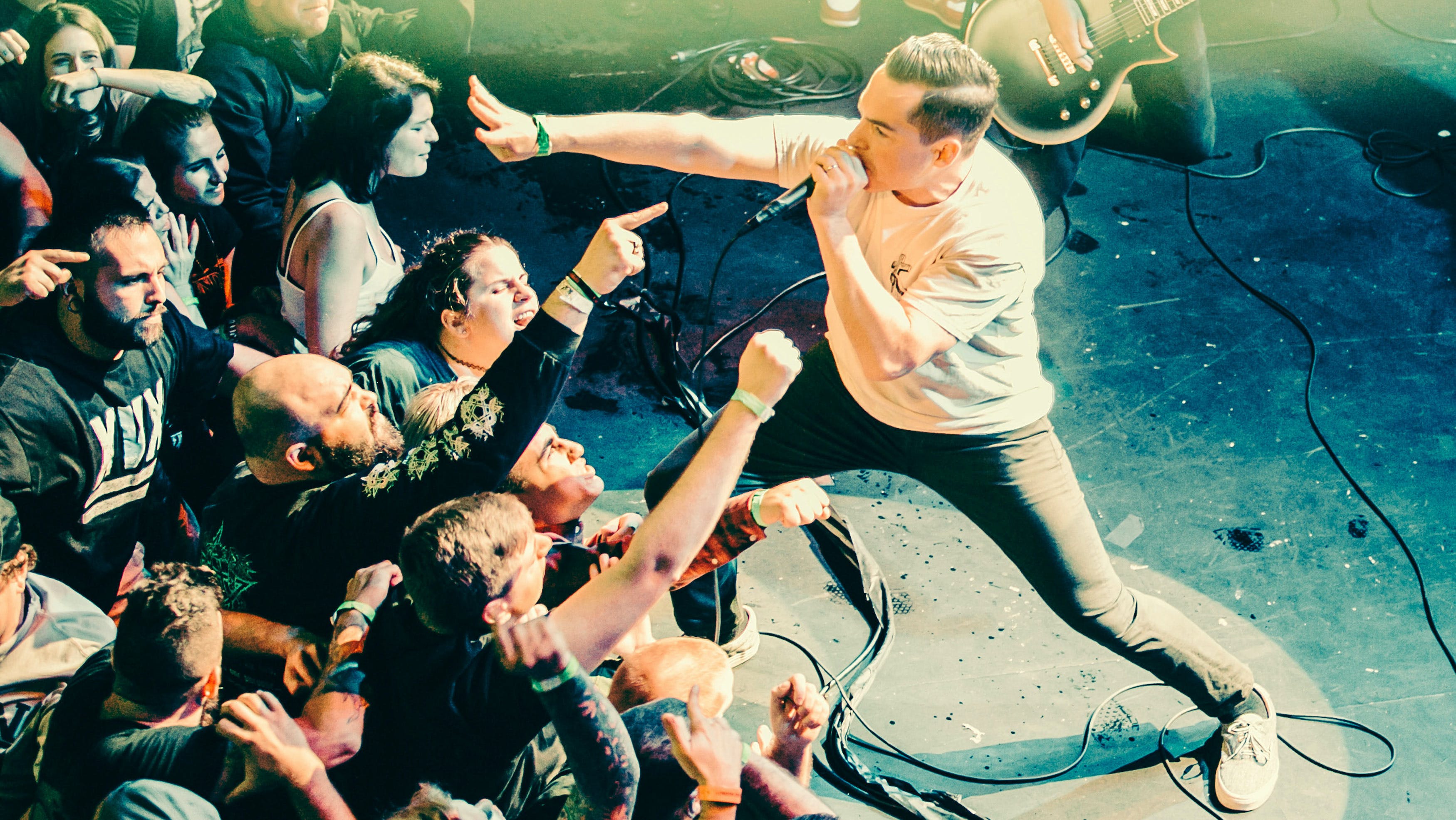 Hardcore, at its roots, has a timeless code: honor the DIY spirit; expel your negative energy without hurting anyone; stick together and take care of your brothers and sisters. And though it may be fairly simple, no one has a better grasp of said code than Back to School Jam founder Greg Falchetto.

Falchetto -- formerly of The Mongoloids and currently vocalist for World Demise -- has been simultaneously strengthening the hardcore scene and blowing minds since 2014, organizing and hosting the stacked fest in his home state of New Jersey for four years in a row. He, like many in the hardcore community, is a fan of a mixed bill that draws in large, diverse crowds. And with 2018's fest being no exception to that preference, the 800-cap White Eagle Hall is packed from the stage to the doors.

Delaware's Year of the Knife kick off their set to a house already packed at 3PM -- a rarity for an early show these days, but not surprising when the band on stage is as ferocious as YoTK. Vocalist Tyler Mullens doesn’t miss a beat throughout the entire set, mentioning in between songs how lucky everyone is to be able to be here and vent anger in such a healthy way. “Not everyone gets this opportunity,” he says. He's certainly right about that.

It wouldn't be a hardcore fest without a little thrash, and Washington D.C.'s Red Death is here to serve up some crazy faces and tasty riffs from the stage. Frontman DHD’s gritty, frenetic vocals echo throughout the room, backed by upbeat drums and some very technical bass runs. Fans nod in unison, pantomiming “yes” to this thrash-punk gift we've been handed so early on in the day.

Vocalist Patrick Flynn and drummer Shawn Costa (both members of Have Heart, now called Free) have kept element's of Fiddlehead's original post-hardcore sound in tact. But the band is incorporating elements of alt rock and indie in their music today, and fans can't get enough of it. Packed like sardines, they push to get closer to the mic. If New Jersey hardcore is a sucker for anything, it’s singing along to live music.

Death Threat was formed in 1997 by a few former members of Hatebreed, and hardcore fans have been hanging on every move the band has made ever since. Their well-timed breakdowns and powerful lyrics are always enough to get everyone off the walls and head first into the pit. Now, the sides of the stage are lined with close friends itching to jump off the stage into the crowd. Best of all, Greg Falchetto gets a guest spot on a song, an awesome tribute to the work he put into the fest this year.

From two rivers over (in Brooklyn, New York), Indecision brings the mosh with breakdown after breakdown. Perfect timing to satiate fans who'd been waiting for some of the heavier bands to step in. In no time, a human pile-up forms, made up of fans angling for a chance to scream into the mic. Vocalist Tom Sheehan makes things easier by throwing the mic directly into the crowd from time to time, allowing for it to make its way from one side of the venue to the other.

There are a few reasons Incendiary has played the Back To School Jam every year since its inception: for one, the band is close with Falchetto; for another, the band is indispensable at a fest like this. This year, Incendiary's Brendan Garrone comes packing a ton of excess energy, and promptly unleashes it onto the crowd. Eventually, Garrone stops the set to note that “...hardcore is the only genre where you get to meet the bands you listened to growing up.” Their ability to connect to the fans on both an emotional and political level is what makes their set so important to this fest.

Folly is the trip down memory lane every New Jersey hardcore fan has been waiting for on this bill. The band hasn't played in years, so naturally, fans are waiting with bated breath. A shoeless lead singer, Jon Tummillo, takes the time to explain that he's an English teacher, and everyone else in the band has a full-time day job. And though he jokes that Folly shouldn’t have made the bill due to their lack of a "cool font," they jump into an amazing Bad Brains cover just a moment later.

If anyone has any pent up anger left, they've saved it for Buried Alive. Having formed in the late '90s, the band has stuck to hardcores traditional values ever since. Lead singer Scott Vogel is also known as frontman of hardcore group Terror, a band with a penchant for making large prompts for more stage dives. While Buried Alive starts out focusing solely on the music, Vogel eventually can't help himself, explaining, “the Terror in me needs to come out -- everybody move to the front!” Fans do as they are told, and heads begin to roll.

At last, though the venue is still just as packed as it was at the start the day, the front of the stage is now completely lined with long-maned fans. Heads bang and hair flies when Power Trip take the stage. The metalheads have crawled out of the woodwork. Fists are raised and pumping while guitarists Blake Ibanez and Nick Stewart shred. The mosh-pits convert to push-pits, and frontman Riley Gale is anything but short on high-flying kicks.

If anyone needs further proof that hardcore is alive and well in its purest form, they'll find it at next year's Back To School Jam. With his deep roots and dedication to the scene, Greg Falchetto organizes one of the most meaningful get-togethers in punk rock: the hardcore high school reunion that celebrates classes of every generation.