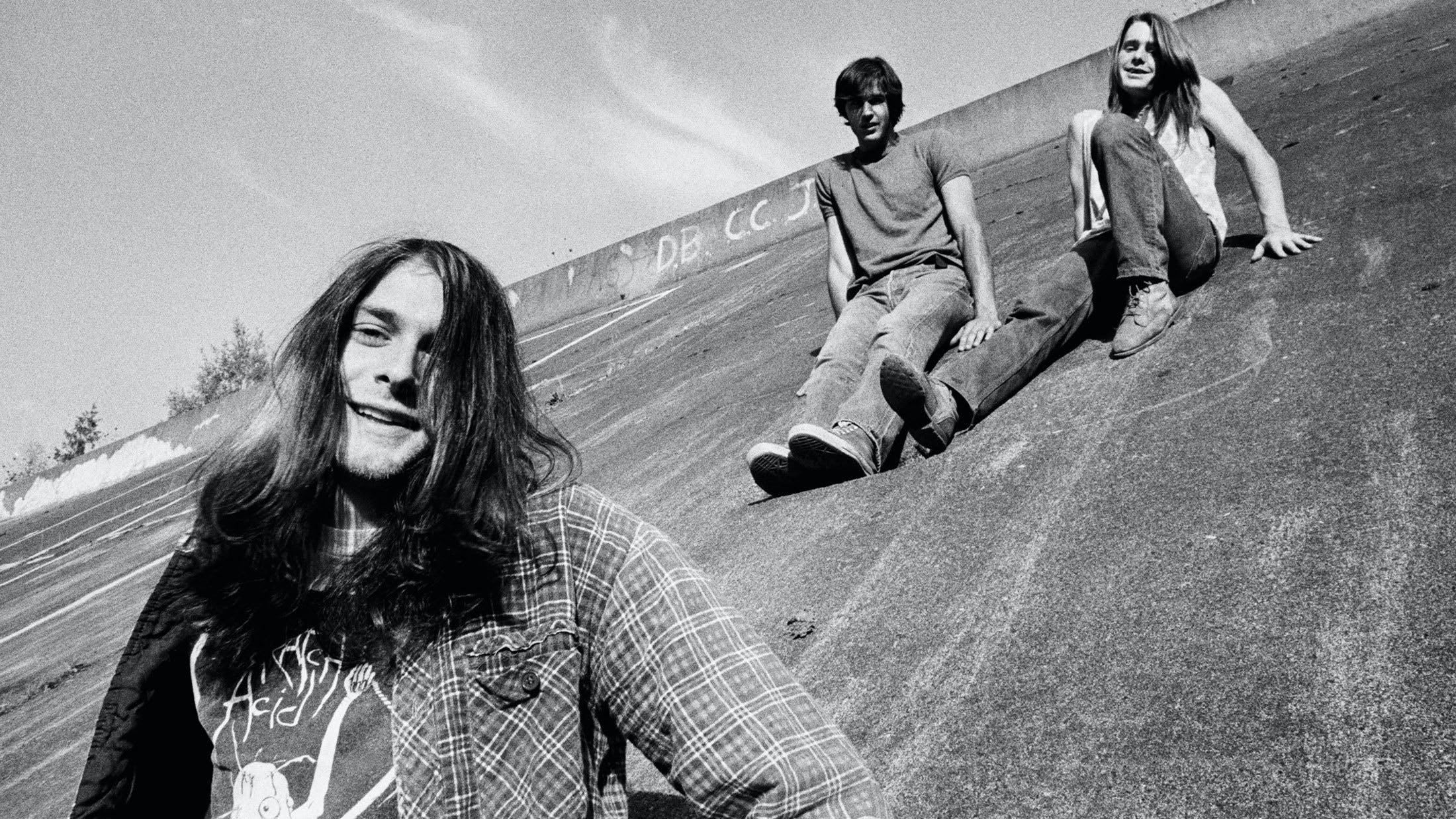 32 years ago, Washington flannel enthusiasts Nirvana released their debut album Bleach and changed the face of alternative culture forever. Part alt.rock, part punk, part pop, all attitude and zero fucks given, the Kurt Cobain-led trio laughed in the face of the glam rock obsession; replacing hairspray and pomp with genuine emotion and introspective poetry. It's amazing to think just how fully-formed Nirvana sound on their initial 1989 release, already leaps and bounds ahead of their peers, becoming the face of grunge in the ’90s.

But what is Bleach actually about? We dive deep into every single song on the record, including bonus tracks Big Cheese and Downer from the reissue.

Bleach achieved its low, doomy slither thanks to Nirvana tuning their guitars down to Drop D. When they recorded opener Blew, however, Krist Novoselic tuned his strings downwards, not realising his bass was already set to Drop D. This accidental new tuning – Drop C – gave Blew its speaker-wrecking low-end. “We recorded a bunch of tunes in that set-up,” he later remembered to Seattle Weekly, “but the next day decided the idea wasn’t so hot. Blew is the only survivor of that experiment.”

Generation X-ers like Kurt loved taking mainstream culture and twisting it into unsettling, perverse shapes. And so it was with Floyd The Barber, a brutish, flailing stomp of bleakest uncut grunge, with Kurt mewling a nightmarish, blackly comedic fantasy of being molested by the titular hairdresser – a character from beloved ’60s sitcom The Andy Griffith Show – before other characters from the show take turns dismembering his corpse. ‘I’m ashamed,’ Kurt moaned in the chorus; he probably should have been.

Though he subscribed to feminist beliefs, the Kurt Cobain of 1988 hardly seemed very ‘woke’. While his girlfriend Tracy Marander went to work to pay their rent and put food on their table, Kurt stayed home to practise his music and his art, bridling at the suggestion that he should help tidy their apartment while she was out earning their crust – a situation which seems doubly unfair considering it was Kurt’s menagerie of pets that was mostly stinking up the joint. At one point, Tracy complained that Kurt had written songs about every arcane aspect of his life, but never one about her. A week later, he penned that song, its tangled lyric reflecting their tenuous love (‘I don’t think you fit this shoe,’ was one of its crueller lines, one that he inverted two verses later), wrapped up in the sweetest pop song he’d yet written.

The song’s unabashed embrace of melody, and step away from the grungy din of the rest of Nirvana’s early material, was a bold move on Kurt’s part, one that played to his natural love of pop – he reportedly listened to the Fab Four’s 1964 album Meet The Beatles! all afternoon before writing the song – and also dared derision from his underground contemporaries. “There was a lot of pressure within that social scene,” he told Rolling Stone in 1993, “the kind of thing you get in high school. And to put a jangly R.E.M.-type pop song on a grunge record was risky.” But the risk opened a new frontier for Kurt’s songwriting, and seduced the man who would produce their next album, Nevermind. “I heard Bleach, and I was underwhelmed – it was very one-dimensional,” Butch Vig told Kerrang!. “Except for one song, About A Girl. That sounded like The Beatles. It showed the possibilities of where the band could go.”

A stereotypically ‘Sub Pop’ riff drives this attack on the Seattle scene Nirvana had recently joined, which Kurt found “incestuously small, cliquey and stuck-up”. “Fuck, I’m in high school again!” he wrote to Dale Crover, a line not far off the song’s refrain. But if School scorns the grunge scene, it does so while posing as a pretty sublime grunge song, as Kurt later admitted: “It was a joke at first, and then it turned out to be a really good song.”

Gil’s Second Hand Store in Nirvana’s hometown of Aberdeen, Washington was Krist Novoselic’s favourite shop, offering a cornucopia of guns, bear traps and chainsaws – “Artefacts from the golden age of logging,” he told Mojo – along with a voluminous selection of obscure second-hand vinyl. It was here, in Nirvana’s earliest days, that he picked up a beaten-up copy of the self-titled debut album by Dutch ’60s psychedelic band Shocking Blue, for a dollar. “I went home and put it on, and was like, ‘Wow, this is great – every song is really good,’” remembered Krist. “I think I busted the Love Buzz riff out at rehearsal – because Kurt had heard that album, too, he’d really liked it. And we just started to play [the song], and had fun with it.”

Nirvana didn’t take their goofy cover version too seriously, but it was integral to them getting signed by Sub Pop Records. Jonathan Poneman had been played the band’s demo by Jack Endino and was already smitten, but was struggling to convince his business partner, Bruce Pavitt, of the band’s merits. Jonathan dragged Bruce along to Nirvana’s show at Seattle’s Central Tavern on April 10, 1988, and when Bruce heard Love Buzz, he fell for Nirvana and said, “That’s the single.” Which it was – the group quickly cut the song with Jack, and it was slated for release via the Sub Pop Singles Club, a subscription service that enabled the cash-strapped label to get punters to pay for records in advance, and showcase some lesser-known local bands.

“Kurt wasn’t thrilled about doing a cover for Nirvana’s first release,” Jack says, but Jonathan argues that Love Buzz was “a great vehicle for the Nirvana sound, allowing them to demonstrate everything they did so well: melody, hooks… The response was ecstatic. Nirvana were such a powerful, out-of-nowhere phenomenon, and it started there.”

Nirvana re-recorded Paper Cuts during the sessions for Bleach, but preferred Melvins drummer Dale Crover’s bone-crunching performance from the demo-tape, using that version instead. This super-sludgy slog took lyrical inspiration from the story of a local family who imprisoned their children in the basement, only opening the door to feed them and change the soiled newspapers they used as a toilet. It sounds like urban legend, but Kurt swore one of those kids grew up to be his dealer’s accomplice.

As Nirvana began to compile the tunes they would record for their debut album, Kurt, realising that Sub Pop favoured grunge in the Stooges heavy punk vein, rather than the more scattershot experiments of Mexican Seafood and Hairspray Queen, reluctantly favoured the more straight-ahead, riff-heavy entries in the early Nirvana songbook. Indeed, many of the riffs they had didn’t even have lyrics yet, so the night before recording sessions for the album began, he holed up at the house of the group’s second guitarist Jason Everman – who would finance the album’s $606 budget, but not appear on the tracks – and wrote the lion’s share of Bleach’s lyrics in one night.

Negative Creep was one such rush job. The riff was a work of neanderthal magic, a distorted two-note jackhammer that growled like a hacking carburettor before tearing off into the haywire, metallic chorus. The lyrics, meanwhile, were unabashed autobiography. “I didn’t care about lyrics at the time,” Kurt told biographer Michael Azerrad, and reasoned that as long as he screamed something gnarly that wasn’t sexist or too embarrassing, that was good enough. What came out was an expression of his dark soul. “I’m a negative person,” Kurt admitted, adding that his persona circa Bleach was someone who was “trying to be ‘punk rock’, or something. I had this terrible Johnny Rotten complex.”

As for the chorus’ ‘Daddy’s little girl ain’t a girl no more’, it was an unconscious cop from Mudhoney’s Sweet Young Thing Ain’t Sweet No More, the flip-side to their deathless Touch Me I’m Sick single, which was perhaps the archetypal grunge track of the early era. Certainly, Negative Creep fit the Sub Pop blueprint to a tee.

This haywire rocker again tapped into the sense of worthlessness Kurt’s father Don had inculcated in his son, via his constant sense of disappointment. ‘In my eyes, I’m not lazy,’ Kurt wails. ‘In your eyes, I’m not worth it.’ The bratty hookline, an incessantly repeated ‘Gimme back my alcohol’, was no party-hearty salute, but rather an admission of failure and retreat into pain-free oblivion – a kitchen-sink drama grimly reaching its grisly conclusion.

Another searing portrait of life on the breadline in Aberdeen, Swap Meet’s barking chainsaw riff chronicled people barely getting by through selling their unwanted crap at car-boot sales, with only their photographs, their cigarettes and their broken relationships holding them together. There’s sympathy and empathy in Kurt’s lyrics, but precious little affection. “Their whole mentality is based on junk,” Kurt told biographer Michael Azerrad. “Grease, and dirt, and poverty.”

‘Judge not lest ye be judged’ was not a maxim Kurt lived by, and this tornado of grungy thrash was driven by caricatures Kurt wrote of holier-than-thou Olympia hipsters (‘Yes I eat cow / I am not proud’) and the titular hillbillies. Kurt had drawn a comic strip featuring Mr Moustache as a trucker cap-wearing redneck, barking at his unborn child, “If you’re gonna live here, you’re gonna live by my rules, and they are as serious as my moustache!”

The slow, acrid grind of Bleach’s closing number reflected a deep sense of alienation, as Kurt revisited moments of childhood anguish (‘Wet the bed’ being one primal humiliation), and the inability of authority figures in his life to comfort him. Kurt, in fact, briefly became a devoted convert to his local Baptist church when he was 17, only to ditch the religion and its tenets a few weeks later.

After the thrill of winning the attention of Seattle’s coolest independent label wore off, Nirvana’s relationship with Sub Pop soon soured. Kurt was insulted that the label was initially reluctant to sign Nirvana beyond probationary debut single Love Buzz, and that label head Jonathan Poneman was “so judgemental about what we were recording”. The band vented their collective ire at Sub Pop’s head honcho with Love Buzz’s venomous B-side, Big Cheese.

Downer began life as a molasses-slow instrumental that Kurt recorded as part of Fecal Matter, with Melvins rhythm section Dale Crover and Matt Lukin, taped by his aunt Mary, who had given Kurt his first Beatles and Monkees records as a kid. Nirvana later cut Downer for their first demo, added as a bonus to the CD release of Bleach, though he was never overly fond of the track, disparaging its splenetic political rant as him “trying to be Mr Political Punk Rock Black Flag Guy”.