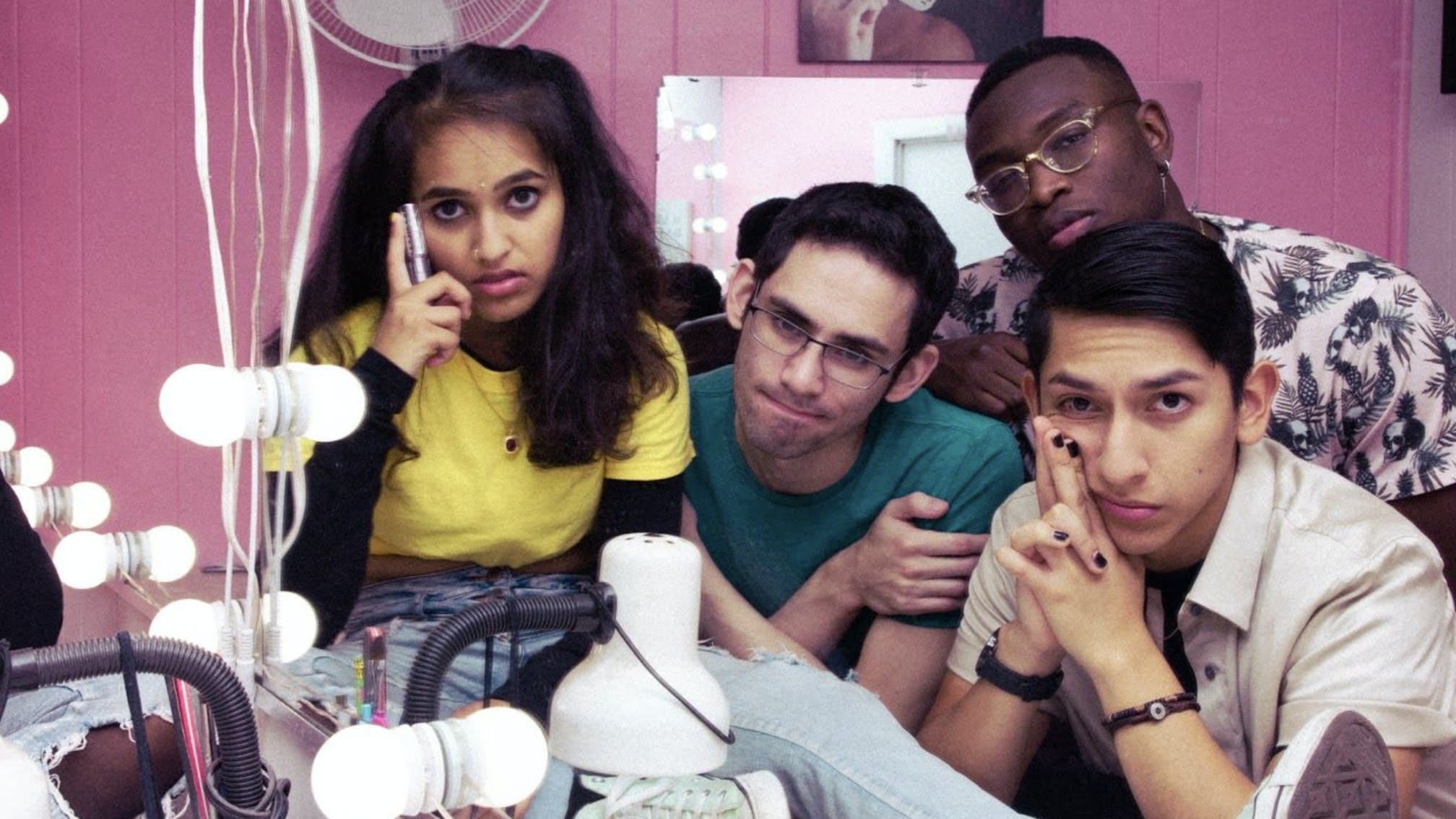 Pop-punk is going through a resurgence right now. Invigorated by social media and a new guard of boundary-pushing bands, the sound and the look of the genre is radically changing. One such band riding the new wave are Maryland’s Pinkshift.

Comprised of vocalist Ashrita Kumar, guitarist Paul Vallejo, drummer Myron Houngbedji, and bassist Erich Weinroth, the self-described 'rat city rock nerds’ formed in college in 2018. All studying at a research university in Baltimore, they're the first to admit there's not much of a scene at their school, so they found each other through music clubs and – would you believe it – a Tinder search party. Reminiscing on their formative days, Ashrita recalls the tipping point: she and Paul had written so many songs that they thought “logically, we should play these out loud, and how do we do that? We have to start a band to do that.”

In the three years since they started, Pinkshift had been gigging regularly in the local area until COVID-19 put a stop to their ambitions. In fact, just a handful of punters turned up to their last pre-pandemic show, most of whom didn’t know who they even were. But now, the band’s first headline show, scheduled for August, is on course to sell out. "It's wild! I've never done anything in front of that many people,” grins Ashrita.

Things really took off for the band last year after their track i'm gonna tell my therapist on you went viral. Currently sitting at over 1.5 million streams on Spotify, it's a genuine outpouring of emotion, built on driving drums and buzzing guitars, reminiscent of early Tonight Alive and Three Cheers For Sweet Revenge-era My Chemical Romance.

"I wrote it [about] being exhausted and I think anybody can relate to that,” says Ashrita about the track’s frustration and vulnerability. “Over the past year I've spoken to so many people who are just tired of being tired. You’re mad about the fact that you're sad; I think a lot of people are unfortunately resonating with that.”

Pinkshift's latest release, the Saccharine EP, is an expansion of this angst. Blending pop-punk with elements of grunge and alt.rock, the band bend their influences to their whims. They hold nothing back: from the muted hope of Mars to the gnarled and rage-fuelled Rainwalk, everything's on the table. It's easy to see why they're a band people relate to.

They're not just tapping into the nostalgia of pop-punk, either; you'll hear whispers of all sorts of rock and punk influences. "I didn't actually listen to pop-punk growing up – I listened to grunge music," admits Ashrita, explaining that it was Paul and Myron who listened to pop-punk, while Erich was into ska.

"Punk in general has always been popular in times of unrest, and one thing seems to be very obviously wrong in the world,” she says, regarding the coronavirus pandemic. "People are gravitating towards the kind of music that reflects those feelings, which might be angst, or maybe they're looking for something hopeful. I don't think people are really relating to LMFAO how they used to.”

She goes on to credit TikTok for this explosion in pop-punk’s popularity: not just for its role in bringing the sound back, but making it so much more accessible.

"You're seeing girls of colour wearing alt. make-up and doing those tutorials. I'm seeing all of these different faces taking on these aesthetics and making them more accessible to people.”

In fact, social media in general has changed everything when it comes to representation, building communities that couldn't have existed 20 years ago. ”When you're the one brown kid in a venue full of white kids it's like you're outnumbered, and you don't know that there’s so many people out there like you,” says Ashrita.

In the past, pop-punk had a bit of a reputation: whiny boys singing about how much they hate their ex-girlfriends. Sure, it's not all like that, but it's hard to argue the scene wasn't associated with people who looked a certain way – namely white and male.

"Moving forward, innovation and shit that sounds different is always going to be the means to growth and popularity," Ashrita asserts. “No-one wants to listen to a bunch of 30-year-old white dudes complaining about the same shit over and over again in the same exact way in the same exact whiny voice. Do it different, you know?”

So who is worth listening to? Ashrita is animated as she lists the bands she's into at the moment – those doing the most exciting things within the ever-growing realm of pop-punk. Meet Me @ The Altar, Action/Adventure, Cherie Amour, Jhariah and Origami Angel are just a handful of bands she believes are doing things differently and pushing the form.

"There's so much creativity within this scene which is really cool," enthuses Ashrita. "Being in a creative space with your friends who are succeeding, it’s really cool to see.

"Uplifting small artists is always the way to keep a scene alive," she continues, in response to the communal ethos provided by the grassroots pop-punk scene. "It's always important to give those artists a platform, because as cool as [Machine Gun Kelly] is, there are so many people who are doing innovative things on the ground.”

That's not to say she believes the chart-topping pop-punk from artists like MGK and Olivia Rodrigo is bad, though. “I think it's cool they're expanding the horizons of what is allowed to be considered popular. As long as [the scene] keeps working to build up smaller artists who will always be doing the most innovative stuff, I think it only benefits us and other bands like us.”

With streaming and social media acting as everyone’s gateway to new music, would-be fans are both guided to pop-punk and inspired to dig deeper, discovering those bands that aren't charting worldwide. "It's allowing a lot of people to unconsciously step out of their genre comfort zone in a way they really hadn't before," she says, pointing to Spotify's Sludge playlist in particular: "It's not really a genre, but it has Poppy and Jazmin Bean and all this weird shit.”

The conventions of pop-punk are also being tested. Sure, it’s perhaps not as surrealist as the aforementioned Jazmin Bean, but the rules of the genre are bending and breaking. While there will always be purists who believe blink-182 and Green Day are among the only true pop-punk bands, the new generation are not tied to what came before, experimenting with the sound and even the very definition of pop-punk.

"I think pop-punk is moving towards either a renewed version of itself or it'll just be rock. I think there's gonna be a 2020s pop-punk and a 2010s pop-punk, you know what I mean?” says Ashrita, referencing bands who are incorporating trap, hyperpop, math-rock and even cabaret into their music. "Once you stop gatekeeping, when it's not just white dudes, you have so many more backgrounds and different influences coming into this genre.”

But where will pop-punk go from here?

"I just hope that the idea of being inclusive isn't a trend, which I don't think it is,” she begins. “Hopefully it'll bring even more talent, more young people, more diverse people into the space and make people feel even more seen. It's cool hearing, 'Damn you're the first person that looks like me that I've ever seen in this space,’ but hopefully it'll become normal. Instead of focusing on our identities, we won't have to anymore because we'll be the new normal. It'll be weird if the majority is straight white dudes!”

Pinkshift are just one of a new generation of bands ready to reclaim the genre and make it their own – and pop-punk will be all the better for it. In Ashrita's words: "At the end of the day, it really is the audience that makes it; the audience can demand whatever they want.”

The pop-punk revolution is here, and Pinkshift are leading the charge.

Poppy’s new graphic novel Tit Tat – co-written with Ryan Cady and featuring art by Norzine Lama – is due out next spring via Z2 Comics.