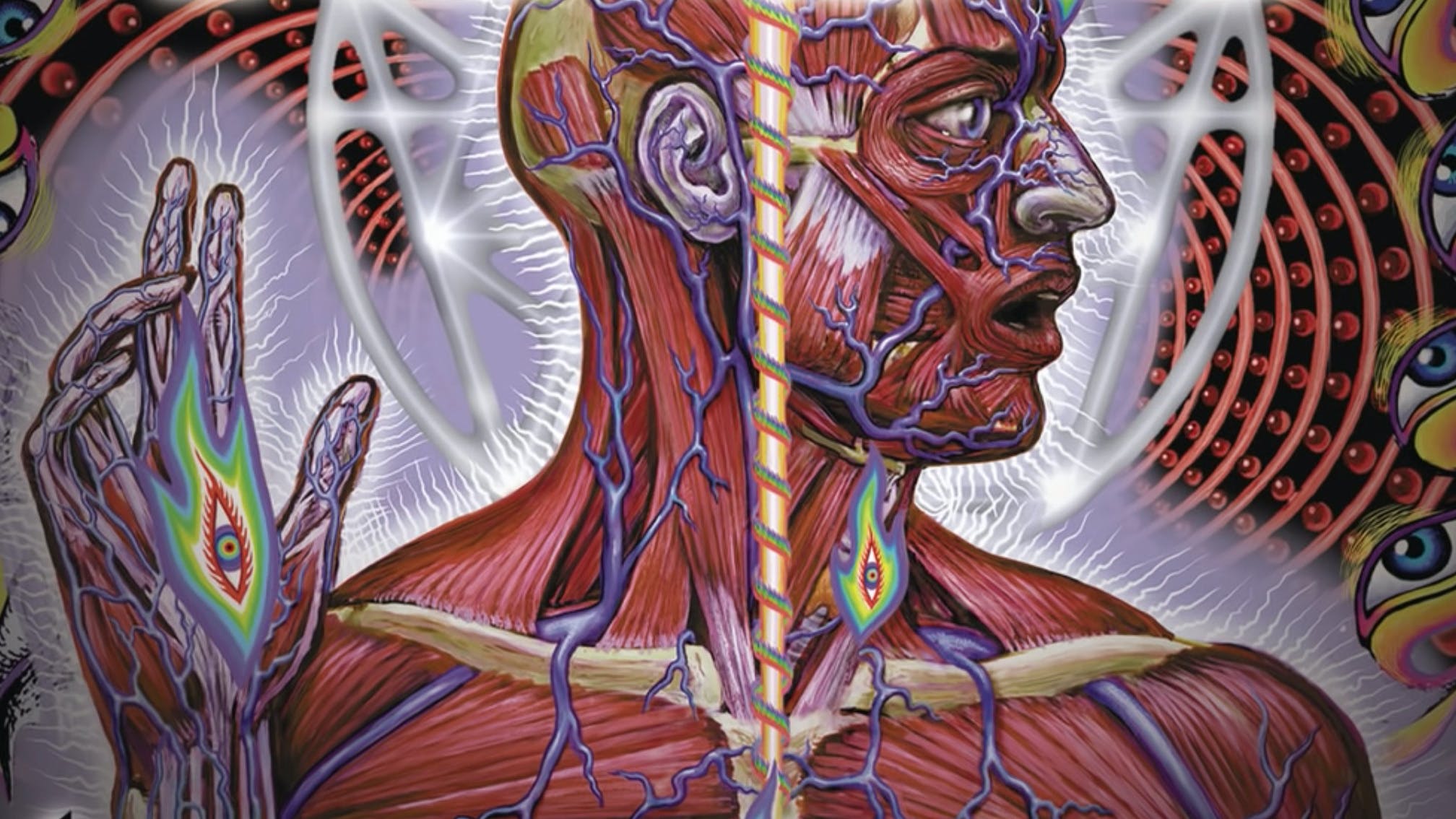 This is the original Kerrang! review of Lateralus from 2001.

The most surprising thing is that it isn’t actually surprising after all. Lateralus, Tool’s third full-length album and the follow-up to 1996’s justifiably-exulted Ænima, is many things, and then some. It’s wholly unique and frequently dense, consistently breathtaking and occasionally otherworldly, sometimes harsh and often wilfully inscrutable. But then that’s exactly what we expected it to be.

Lateralus, in case you’ve been living under a rock on the Planet Fucknut for the past millennium, is officially The Most Anticipated Album Of The Year By A Band Who Aren’t Called Guns N’ Roses. Aenima was a work of art – yes, art – that redefined what could be done in the context of music made by four men and their instruments. It was the record NASA should have beamed into space to show the rest of the universe that, despite a swelling pile of evidence to the contrary, there is intelligent life within Earth’s musical community. Lateralus doesn’t so much take what Tool achieved with that record and step it up a gear as bust it through a wormhole in the space-time continuum and drag it to an altogether different place.

Be warned: if you’re expecting Lateralus to push back the boundaries of what can be done in the name of modern music, think again. That infers some acknowledgement of the boundaries in the first place. Lateralus is the most unique collection of songs you’ll find outside of, well, the last Tool album. it’s also the most perfectly played, perfectly produced record you’re likely to hear this or any other year. In anybody else’s hands, perfection is just a code word for repugnant tedium. In Tool’s hands, it’s the ultimate raison d’etre.

It’s almost easier to describe Lateralus in terms what there isn’t rather than what there is. There are none of the lightning-strike dynamics of the past (see Ænima’s Stinkfist or Hooker With A Penis). There’s no grinding repetition, no marathons of aural endurance (see: the same record’s gargantuan closer Third Eye). And there are no, to paraphrase one of the band’s old slogans, absolutely, definitely, unequivocally no fucking hit singles.

What there is, is a constant unwavering feeling that something truly special is unfolding right before our ears. Of the 13 tracks that constitute Lateralus, only five duck in under the five-minute mark, two of which (Eon Blue Apocalypse and Mantra) are short, hypnotic segues, and one more of which (Faaip De Oiad, a piece that reputedly takes its title from the language of angels) is a ‘hidden’ track consisting of two minutes and 39 seconds of pure me(n)tal machine music.

Which leaves approximately 68 minutes of music that ebbs and flows in washes of near-genius; 68 minutes that take in the astounding drum patterns that underpin The Grudge and Lateralus itself, the massive riff that brings Parabola to a close, or the veins of biliousness that shoot through Ticks And Leeches, and the 11-minute lysergic soundscape that is Reflection. And that’s not even mentioning Maynard James Keenan’s oblique, metaphysical lyrics. I’ll get back to you on that one sometime around Christmas…

There’s just too much going on here to grasp in one sitting, or two sittings, or even 22 sittings for that matter. Ænima was released five years ago, and its only just starting to make sense: extrapolate that, and the Chinese puzzles that make up this brave, epic, strange, beautiful piece of music should fully unveil themselves sometime around 2010.